My affection for Atwood Stadium began in the late 1950s, when my grandparents and father took me to several Thanksgiving Day football games played there between Flint Central and Flint Northern.

Atwood Stadium brought me out of my darkest days in April of 1965, three weeks after I lost my older brother, John, Jr. in an automobile accident. In my first varsity appearance for Southwestern High School, I pitched a no-hitter and defeated Northern. My father, John, hugged me after the game and with tears in his eyes said, “I’m proud of you son. That one was in memory of your big brother.”

Over the years, I attended hundreds of events at Atwood. The stadium itself has cycled from its high as a community center, where huge crowds watched outstanding events, to the low of a temporary shutdown in the early 1990s because of broken benches and worn out carpet. Just as the Flint community has changed over time, so has Atwood.

With $3.5 million in improvements from the City including a new, artificial surface, Atwood reopened on September 2, 1995 to a high school football double-header and 6,000 screaming fans. However, with declining revenues, the City of Flint simply could not place a high priority on Atwood’s long-term needs.

In late 1999, as I was circulating petitions to “Preserve Atwood Stadium,” I received a call from Flint Mayor, Scott Kincaid. He offered his congratulations and said, “You are the new chairman of Atwood Stadium Authority (ASA).”

ASA had a dedicated Board of Directors and received generous financial assistance from the Mott Foundation and other funding sources. New scoreboards and field lights were installed, as well as parking improvements. 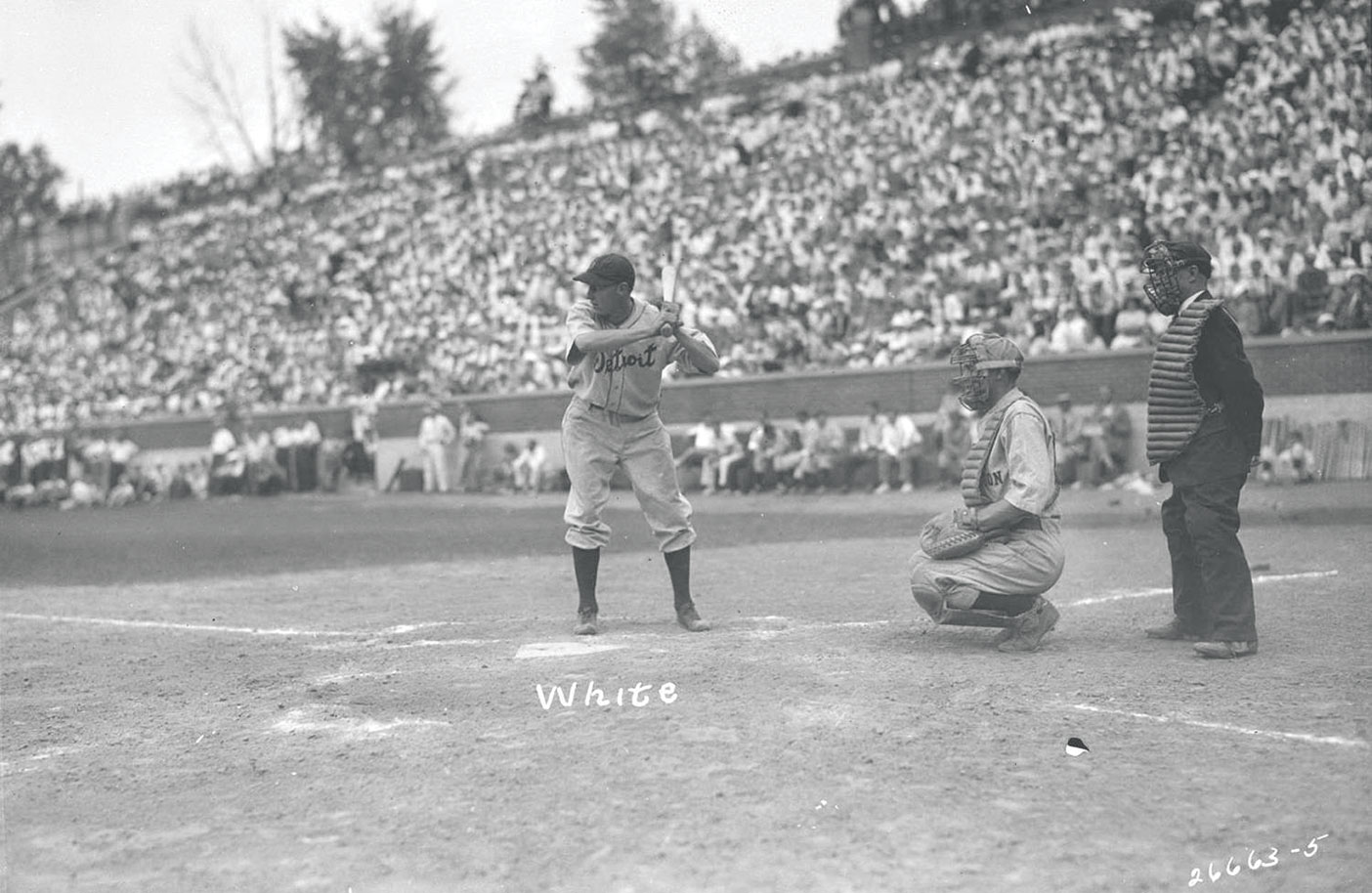 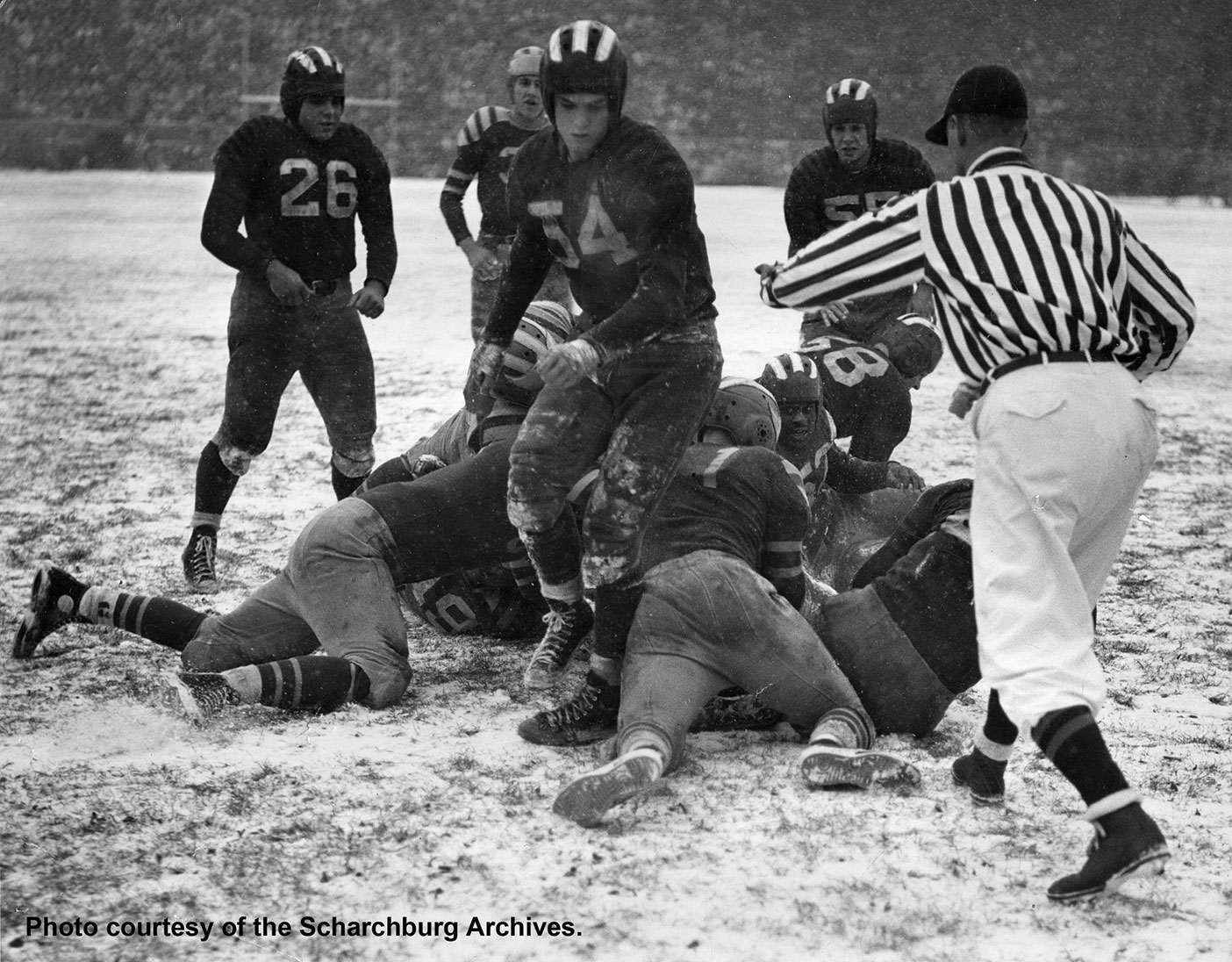 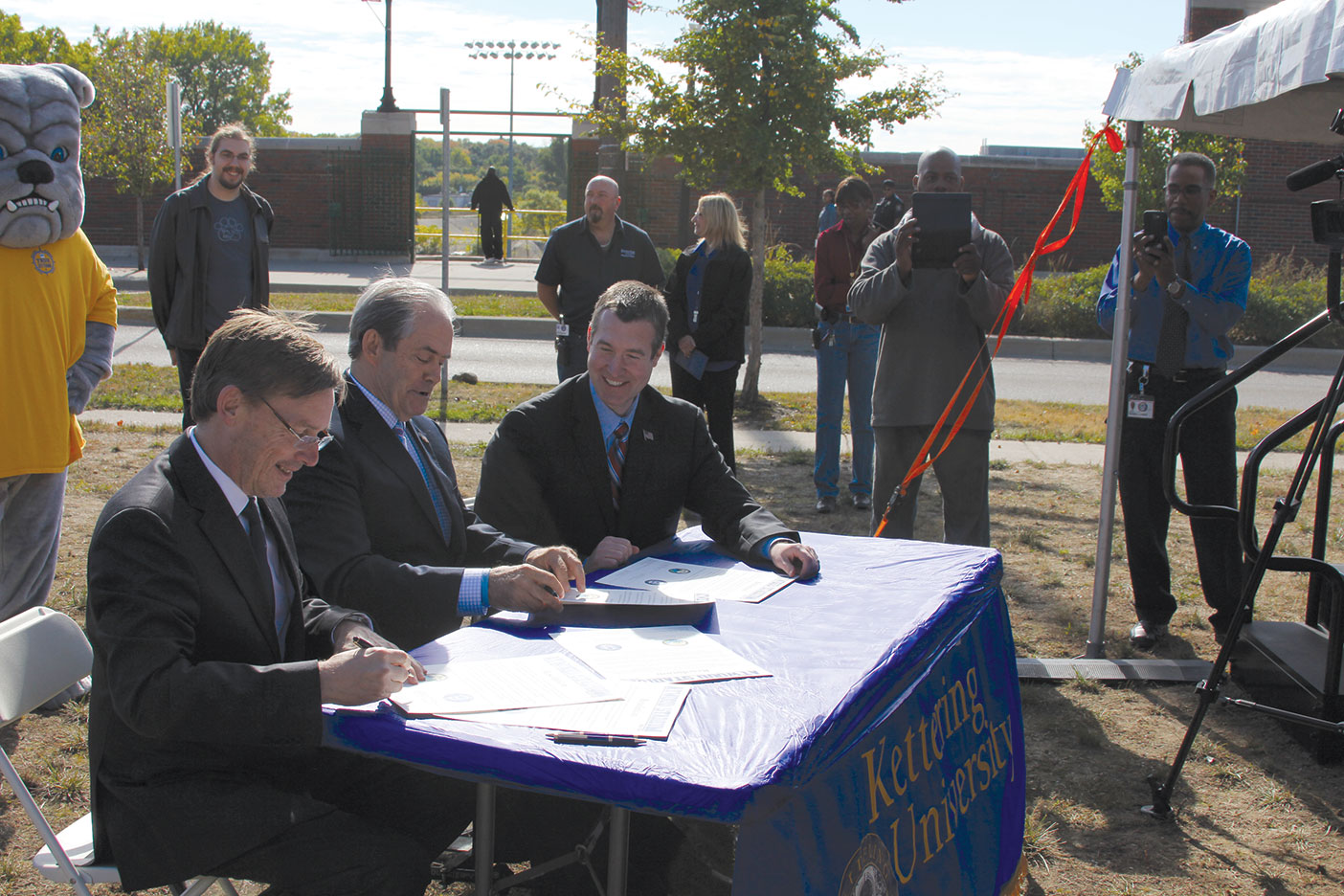 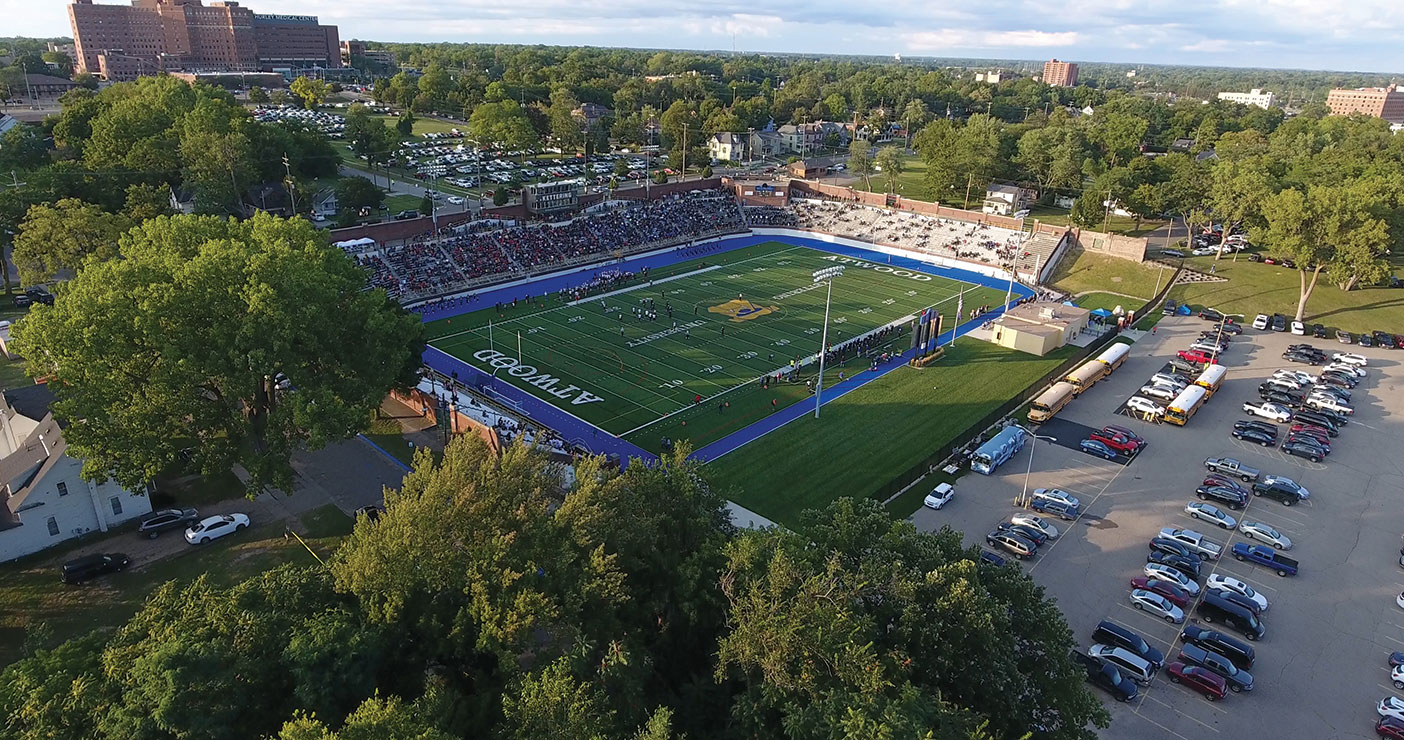 Around 2012, the ASA faced several challenges. Economic conditions worsened in the City, fundraising became more difficult and the need arose for a new playing surface in the stadium.

Kettering President, Dr. Robert McMahan, has been at the University’s helm since 2011, and has done a great job to upgrade the campus atmosphere and surrounding neighborhoods.

A 15.5 million dollar pledge to Kettering from the C.S. Mott Foundation was announced in 2012, which funds would be used for several improvements to buildings and programs.

With the City of Flint facing severe financial issues in 2013, Flint Emergency Manager, Mike Brown, ordered the transfer of Atwood Stadium to Kettering University. Supporters of Atwood remained cautious as to Kettering’s commitment.

Dr. McMahan indicated, “We are keenly aware of the importance a well-maintained Atwood Stadium has to the future viability of the University corridor. It makes sense for us to take this proactive role in the preservation of this cherished facility in Flint. Keeping institutions like Atwood Stadium viable is critical to ensuring the University corridor becomes a safe, walkable connector for our University and the neighborhoods around us, to downtown Flint.”

However, in 2015, with community gifts from Kettering University, Diplomat Pharmacy and the C.S. Mott Foundation, the University oversaw $2 million in renovations and improvements to help re-open the stadium for the high school football season.

Any concerns over Kettering now owning Atwood were put to rest. The historic stadium looks great, as well as the surrounding areas. This strong collaboration between Kettering and the Mott Foundation has been beneficial in the preservation of Atwood.

In 2022, Atwood will celebrate its 93rd year. Over that period, a great variety of wonderful events, from athletics and concerts to political and academic celebrations have been held at the stadium. If we were having an “award night,” the following would be winners:

The 1950 Thanksgiving Day Game between Flint Northern and Flint Central that brought a record breaking crowd of 20,000 screaming fans, won by Northern in the closing minutes, 20-13.

It was the perfect picture taken by Dante Levi of the Flint Journal of the above “Best Game” that shows Northern half-back, Leroy Bolden, running for the winning touchdown in the waning minutes of the game. When Bolden broke loose, the fans in the stadium knew it was the decisive moment, as Levi’s photo shows the scoreboard in the background, little time remaining and the score tied 13-13.

On August 22, 1947, legendary featherweight boxer Willie Pep defeated Flint’s own Jack Leslie in the 12th round of a world title bout that drew more than 10,380 fans to the stadium.

President Franklin D. Roosevelt rolled into Atwood for a re-election campaign in October of 1936. He spoke from inside the motor vehicle before 20,000 people.

During a 1960 presidential election stop in Flint, Senator John F. Kennedy spoke to a crowd of about 13,000.

The stadium’s refurbished press box bears the name of Robaire Smith, a Parade All-American for Flint Northern in 1995 who went on to further stardom at Michigan State and the NFL.

When the stadium was struggling to raise funds in 2005, Smith privately made a $100,000 donation to Atwood Stadium Authority.

There have been so many great concerts over the years, including Ready for the World, an R&B band from Flint. My favorite was the afternoon of August 2, 1983 when the stadium came alive for a concert featuring Journey, Eddie Money and Pat Benatar. Tickets for the show sold for $10.50.

Jim Abbott, the one-handed back-up quarterback for Flint Central got the start and on a rainy November 11, 1984 threw four touchdown passes in a state playoff game to defeat Midland 26-20.

In October 2006, I had the pleasure of watching Mark Ingram, II rush for over 300 yards for Southwestern Academy in a victory over Bay City Western. Ingram went on to Alabama where he won the Heisman Trophy in 2008 and helped them win a national championship. In the spring of 2009, Ingram returned to Atwood to take part in a celebration of his accomplishment.

When Costa Papista brought the Flint City Bucks soccer team to town, no one knew what to expect. Playing on their home field at Atwood in their first season on August 3, 2019, the Bucks made history by winning the USL League 2 Championship in overtime before 7,198 screaming spectators.

On June 16, 1917 a citywide work bee attracted 5,000 volunteers to clean up a dump for a park where Atwood Stadium now stands. Plans to build the stadium came to a halt when a bond proposal failed and a commitment from the state of Michigan was withdrawn.

• In 1936, Jack Dempsey, World Heavyweight Champ from 1919-1926, refereed several championship flea-weight bouts in a General Motors boxing tournament. No one laid a hand on him.

• Jackie Robinson, who broke the color barrier in major league baseball in 1947, appeared at Atwood in 1946 with the Kansas City Monarchs from the Old Baseball League.

• In the summer of 1959, I was witness to a Sunday visit of Ted Williams. Regarded as one of the greatest left-handed hitters in baseball, Williams ignored a downpour to give a hitting exhibition.

• In 1936, track Olympian Jesse Owens, who won four gold medals at the Berlin Olympics, came to Atwood and raced against members of two semi-pro baseball teams. To no one’s surprise, he won both races.

Along with so many other supporters of Atwood Stadium, I hope to be around in 2029 when the stadium celebrates its 100th anniversary. We can all look forward to sharing the memories.