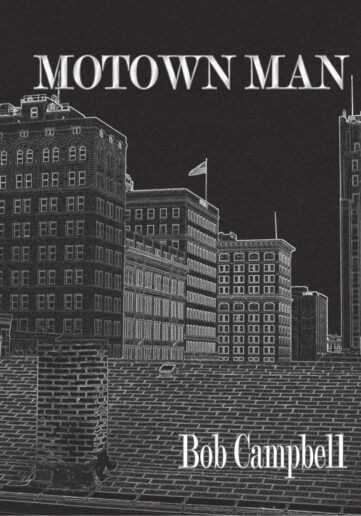 Motown Man, a newly published novel, is a story of an interracial romance set in a faded, Midwestern industrial town. It is filled with veiled racial tension, marked by uncertainty and on the edge of losing its identity, according to the author, Flint native, Bob Campbell.

Born and raised in Vehicle City, Campbell attended Southwestern High School, worked for GM for seven years and was a writer for various newspapers, including the Flint Journal, Lexington Herald-Leader and Detroit Free Press. Campbell is currently the senior communications manager for the Flint & Genesee Chamber of Commerce.

“Humanity of the Black man is a significant theme.”

What was the inspiration behind Motown Man? Campbell, who has always had an interest in creative writing, says, “I was inspired to write this by a news story from the early 90s. Much of the setting is in an automotive components plant. I was able to explore gender role, family relationships, interracial communication and factory life. Humanity of the Black man is a significant theme.”

Campbell says the book’s title came about from a conversation between two main characters, and the colorful way in which Black folks talk in relaxed settings and comfortable surroundings. “In addition, Motown, as in the Motown sound in music, signifies an enlightened, almost enchanting moment in American history, particularly in the early to mid-1960s,” he adds.

“I very much enjoy the creative aspect of writing.”

Motown Man can be found at several area bookstores, including Totem Books, Fenton’s Open Book, Comma Book Store & Social Hub in Downtown Flint, and at Barnes & Noble. It can also be purchased online at Amazon.com, bookshop.org and urbanfarmhousepress.ca.

“I very much enjoy the creative aspect of writing,” Campbell says. “I enjoy the process. I like words and being able to arrange and rearrange them like LEGO® blocks to express an idea, thought, emotion or action. It’s rarely easy, but immensely satisfying when it all comes together.”

Any future plans for another book? “I have some ideas I am exploring,” he shares. “I have some things I want to dig into.”