Jameshia Shepherd, 23, has many of the same qualities she had at age 13 – studious, curious, obedient and determined. Those attributes helped her evolve from a young participant at Motherly Intercession – a non-profit organization which helps children who have an incarcerated parent – into a staff member at the very place that nurtured her in her formative years.

“When I was 13, my mom made a decision to get me and my younger brother involved in Motherly Intercession,” says Shepherd, who has a vague memory of her father being incarcerated and then absent for most of her teen years. Fortunately, the adults in her life protected her from knowing why her father was sent to jail. Her memories of him include seeing him go to work and realizing he was a hard worker. “My mom heard about the program and liked that it offered tutoring and the educational piece we needed,” says Shepherd.

Shepherd’s mother knew she could benefit from Motherly Intercession, which was founded by Shirley Cochran almost two decades ago, to provide emotional, social and after-school academic support for children of incarcerated parents. “I didn’t know what to expect from the program,” says Shepherd. “I knew we were eligible to participate because of my father’s incarceration. I was curious like any other kid and a little scared, but I was up for trying something new.” The “something new” turned out to be more than Shepherd could have imagined. 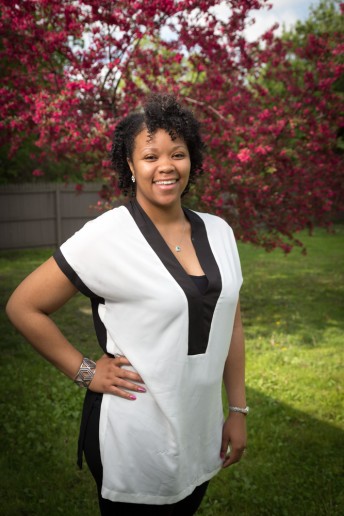 “If I can help them view themselves not as victims but rather, to work hard and better themselves, then that is what I’ll do.”
JAMESHIA SHEPHERD

At Motherly Intercession – then located on Kearsley St. near the Flint Public Library – she received transportation, meals, homework help, and access to a computer for school work. “I did my first science report on a computer there, I learned how to play the piano and made friends,” Shepherd recalls. “I was an honor roll student and was able to keep that going through all of the help and support I received from mentors like Shirley Cochran and the other volunteers at Motherly Intercession.”

Shepherd’s high grades and academic standing helped her stand out enough to get noticed by Cochran, who offered Shepherd her first paying job. “I was part of the junior staff,” says Shepherd. “I learned about responsibility and I was trusted to help with meals, keep the computer lab straightened, scan papers, and do various miscellaneous office duties.”

Shepherd remembers Motherly Intercession as a place where everyone had something in common, but didn’t necessarily talk about it. “None of us wanted pity or wanted others to be sad for us,” she says. In fact, Shepherd poured her passion for achievement into her time at the facility. “I definitely faced challenges and obstacles – all of us did; but I escaped by setting academic goals for myself,” she says. “Being there was my fuel to keep going, and I’d push the burdens away and embrace my ability to achieve academically.”

Her confidence began to climb … but then, a tragedy happened. In the summer of her junior year of high school, Shepherd’s mom unexpectedly passed away.

“I vividly remember what a challenge it was. My brother and I were split up and placed into the foster care system. It was during this difficult time that Ms. Cochran really stepped up to mentor and help me move forward.” 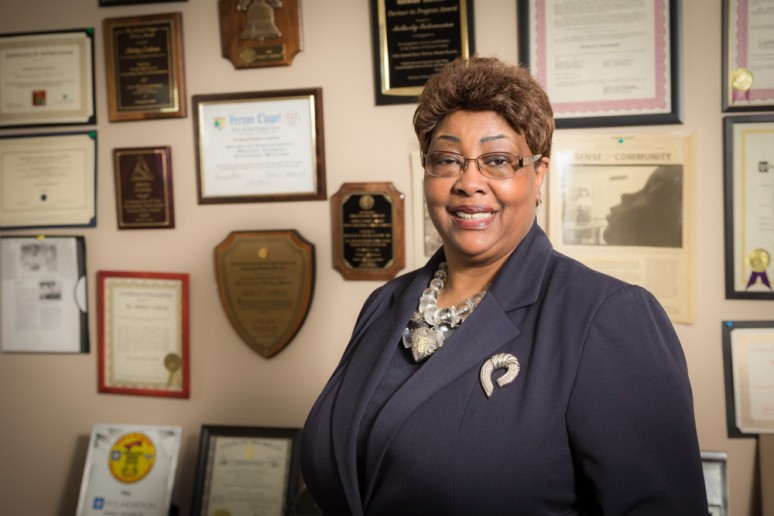 “Jameshia has earned every success – she took the support we gave her and made it her own.”
SHIRLEY COCHRAN, FOUNDER

With an absent father and her primary caregiver gone, Shepherd relied on her connection to Motherly Intercession even more. Her brother was eventually adopted by a loving family and she went on to try independent living. “Losing my mom was really hard on me,” she says. “She was really the only stability I knew and after I lost her, Motherly Intercession was all I had.”

“Jameshia tugs at my heart,” says Cochran. “She’s earned every success – she took the support we gave her and made it her own. She was receptive to listening, learning, and she thrived in order to make a positive outcome for herself.” Cochran believes that Shepherd is an example of her organization’s mission, which states: “Motherly Intercession’s vision is for the children of incarcerated parents to realize their parents’ destiny … does not have to be their destiny, and strive to chart a successful career path for themselves.”

Shepherd did that when she applied, was accepted, and studied at Wayne State University her freshman year of college. “I wanted to try going away to college,” she says. “I moved back to Flint because of costs and I went to Mott and then to U of M-Flint for my bachelor’s degree in Social Work. I was homeless for a while and things were tough. I lived with friends and then made my way back to Ms. Cochran at Motherly Intercession, where she slowly worked me into the budget and put me on staff.”

Shepherd is thriving again. At one point in time, she coordinated and handled all aspects of Reading And Counting to Success (RACS), the after-school program she once attended. She managed the transportation, meals, and volunteer staff. Currently she facilitates a weekly parenting session known as Parenting While Incarcerated, for mothers in the Genesee County Jail. She has a unique and convicted philosophy when dealing with women behind bars. “I don’t want to know what they’ve been charged with,” she says. “They’re mothers who have broken the law in some way – that’s all I need to know. I don’t think it would help me or them if I knew whether they committed murder or theft, or whatever. I’ve heard their children’s hard stories, and our aim is to help parents and children remain connected.”

She is also one of three Motherly Intercession staff who take children to visit their mothers in jail on the first and third Saturdays of the month for the “Bonding From a Distance” program designed to help with physical touch for incarcerated parents and their children. In addition, she lends a hand in the Strengthening Incarcerated Families (SIF) program on Mondays and works to build discussion and dialogue between the kids and their incarcerated parents.

Shepherd’s compassion and desire for success for the children she interacts with is deep and personal. “I feel passionate about school and education,” she says. “I try to encourage the kids and be a listener. I was once a youngster in need like these kids are. A couple of the kids remind me of myself – they have drive and ambition. They avoid drama and come with a ‘get-down-to-business’ attitude. They’re here to learn and work.” She loves working one-on-one with today’s Motherly Intercession participants. “I’m excited to see their improvements and positive changes,” she says. “If I can use my story as a platform to help them not view themselves as victims but rather, to work hard and better themselves, then that is what I’ll do.”

Her own determination continues.

Shepherd is working to earn her master’s degree in Social Work at Michigan State University, puts in 30 hours per week at Motherly Intercession, pays her own bills, and was recently accepted to participate in a week-long internship to work with Congress in Washington, D.C. “This opportunity will give me a taste of my ultimate goal,” she says smiling. “I want to go to law school and be in a position to advocate on a national level – to give a voice to young people facing adversity, barriers and challenges like I faced.”
To volunteer, donate to, or learn more about Motherly Intercession, visit miforu.org or call 810.424.9909.