Mesmerizing music sets the tone of a YouTube video entitled, “United Way of Genesee County: Flint Water Fund.” Images of sunlit Flint-area landmarks appear. Roughly 16 seconds elapse before a studious-looking, well-spoken 13-year-old named Mia Aubuchon begins passionately describing the Flint Water Crisis, first while standing in front of the Flint Institute of Music before moving on to other well-known spots around the city.

She emphasizes that Flint residents are still very much in need of assistance in dealing with the situation and directs those interested in helping to the United Way’s Flint Water Fund.

“Flint, Michigan. What is the first word that comes to your mind when you hear the name of this city? Water?” Aubuchon states in the video. “Though the Flint Water Crisis has lost a lot of its relevance in the media, it’s still a very serious issue. Many residents throughout the city don’t have access to clean water, and likely won’t for a very long time.”

Aubuchon, a Davison Middle School student, created the 88-second video for Project for Awesome – an annual 48-hour, livestream fundraising effort organized by bestselling author, John Green (The Fault In Our Stars, Paper Towns) and his brother, Hank. During Project for Awesome, thousands of videos about and advocating for charities are posted, and the organization then promotes them to raise money for charities.

Based on voting, some videos are selected to be featured on the Project for Awesome (P4A) homepage. Aubuchon’s video was among them and, as a result of her efforts, the organization will present United Way of Genesee County’s Flint Water Fund with a donation of at least $10,000 later this year.

“I really never thought the video would get that far,” says Aubuchon, whose production had received more than 1,800 views and 88 comments as of mid-February. “For the video to be featured on their homepage twice during the event was really amazing for me,” she says. “It was great to see Project for Awesome take such an interest in the video and for it to lead to such a nice donation was incredible.”

“I just love the whole process of coming together
with other musicians to create great music.”
Mia Aubuchon 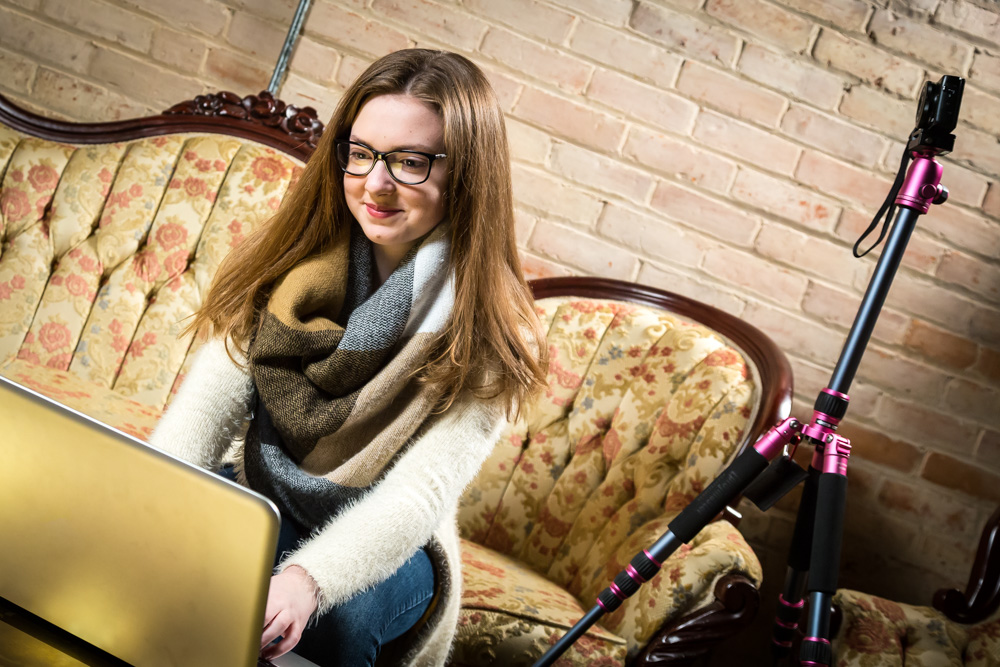 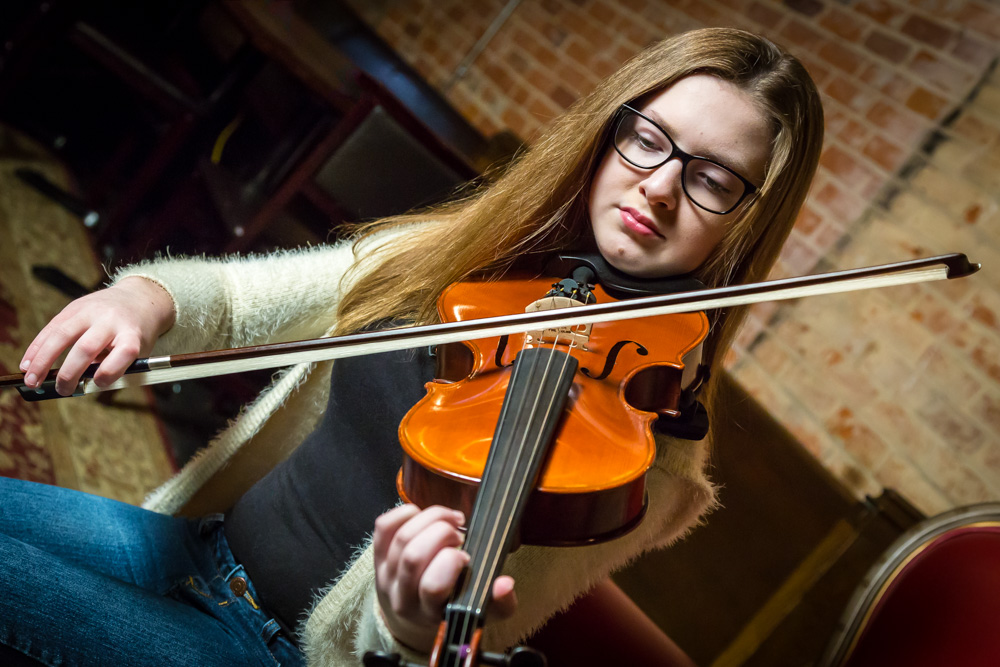 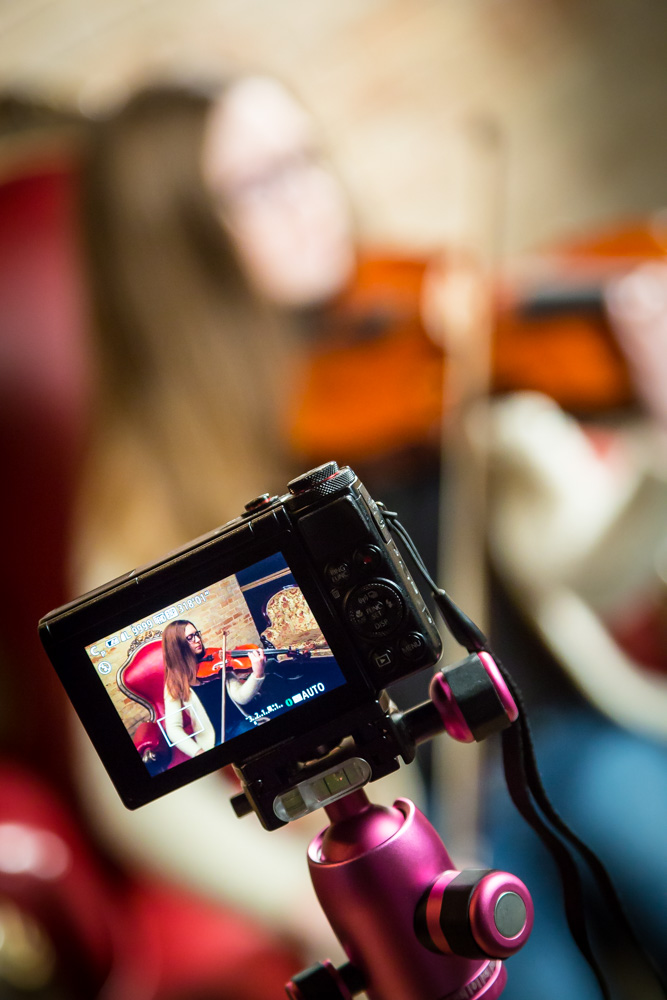 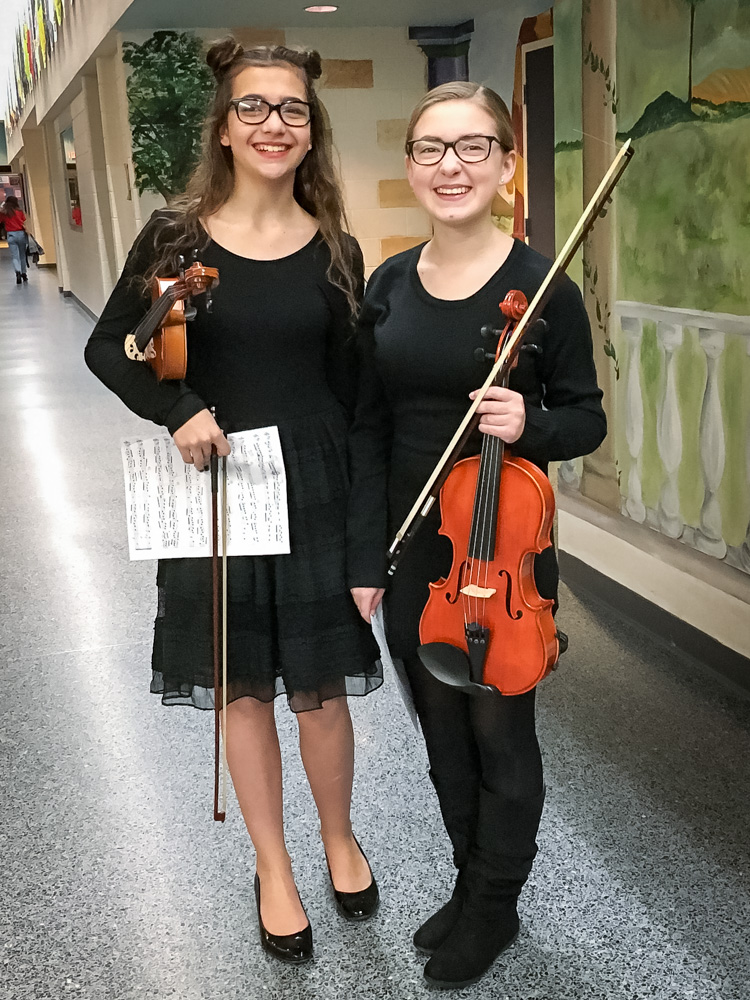 P4A also led to an incredible moment for Mia’s mother, Courtney, who was periodically tuning in to the fundraising effort, including in the middle of the night. “I woke up during the live fundraising at about 2am, and my timing was perfect because there was the famous author John Green and his brother talking about and featuring Mia’s video,” Courtney Aubuchon says. “It was overwhelming and I’m like, ‘This is my little girl they are talking about. It was kind of crazy and surreal.”

This was the second time Mia has submitted video to P4A. In December 2015, she created her YouTube channel (“BooksandWhateverElse”) and produced a video on behalf of the Malala Fund, which works to promote equal education opportunities for girls around the world. It is named for Malala Yousafzai of Pakistan, who in 2014, became the youngest Nobel Peace Prize recipient in history at age 17. While that video did not receive quite as much attention (182 views), it was one of several created for the Malala Fund and helped secure a $15,270 grant for the organization.

Roughly one month later, Aubuchon had settled on the subject of her 2016 Project for Awesome video. “This time, I wanted to focus on a charity closer to home and felt there was none more important than the Flint Water Crisis,” she says. “I felt it was no longer getting the attention it had been in the media. I wanted to help raise awareness and stress that it really still is a serious issue.”

Aubuchon began working on the video in earnest as the P4A date approached, writing the text, selecting locations, deciding what piece of music to use, and eliciting the help of stepsister, Bella Castro and father Scott, who has passed his own interest in video work on to his daughter. Bella held a Canon G7X camera while Scott drove them to the various locations.

“In the Malala video, I was just standing in front of a picture of her, but I knew I wanted to do something bigger for the Flint Water Fund, so I starting planning,” Aubuchon says. “Once I had written it out and picked the locations, I found some music to use that I had saved on my computer.” Shooting and editing followed and Aubuchon posted her video on December 9.

“Mia’s video was awesome,” says Project for Awesome’s, Victoria Bongiorno. “It moved quickly and touched on a topic important to young people around the world. The grant to the Flint Water Fund will be more than $10,000. We will know the actual amount and make the donation in the spring.”

Aubuchon is still deciding on the subject of her next P4A video, but is certain of how much she loves the video-making process.

“To me, online videos give the opportunity to make a difference in people’s lives and reach those you normally would not be able to reach,” says Aubuchon, whose YouTube channel has 103 subscribers. “I find that amazing, and I want to continue to be a part of that and grow as a filmmaker.” 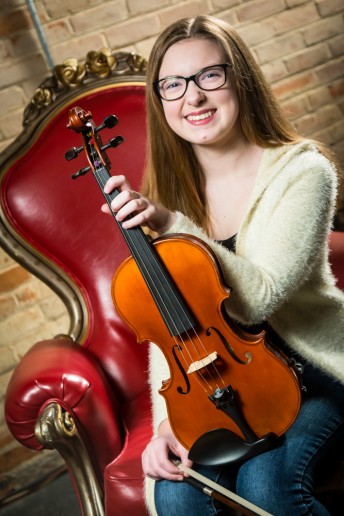 There is more to Aubuchon than video production, however. A viola virtuoso, she became the Flint Youth Symphony’s youngest member in 2015. “Playing the viola started with a summer string program at the Flint Institute of Music, and I have loved it ever since,” says Aubuchon, who also plays in her school band and receives weekly private music lessons. “I just love the whole process of coming together with other musicians to create great music.”

The Flint School of Performing Arts Director, Davin Torre, has witnessed Aubuchon’s musical growth. “Mia quickly progressed from the Intermezzo string class to the Flint Youth String Orchestra to the Flint Youth Philharmonia and finally to the Flint Youth Symphony,” Torre says. “Mia has great talent, but also works very hard. If she chooses a future in music, she will be very successful. But, with her focus on filmmaking and great accomplishments there already, I’d bet on Mia following in the footsteps of some of the great directors like Nora Ephron and Sofia Coppola.”

Among the highlights from Aubuchon’s time with the FYSO is last year’s trip to Paris and Lyon, France where they performed with French youth orchestras and took in world-famous tourist attractions while staying with host families.

“That was just an incredible experience for all of us and anybody who has the chance to travel abroad should take advantage of it,” says Aubuchon, who also posted videos from the trip. “We learned a lot by staying with the families and giving concerts with French musicians.” Next month, it will be the French youth musicians turn to visit the Flint-area and stay with FYSO families. Their visit will culminate in a joint concert by the FYSO and the Paris-based Courbevoie Youth Orchestra on April 13.

Though only in eighth grade, Aubuchon is beginning to formulate her post-high school plans while acknowledging that much can change between now and her 18th birthday.

“Right now, I see a future for myself in both music and film,” she says. “I would like to be part of a college music program. I am really interested in composing musical scores for films, because that would be a great way to combine both film and music, but that all could change.” True enough; but Aubuchon’s unique creativity will probably never change.