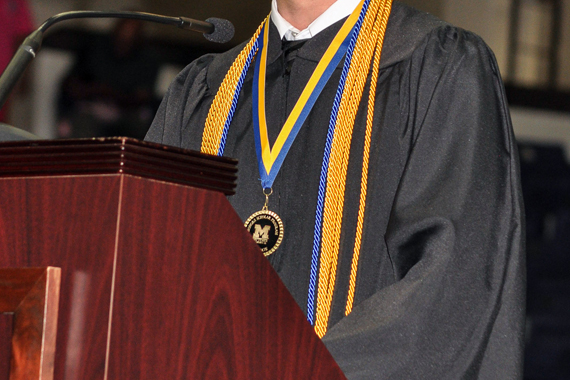 The Maize & Blue Award is a University of Michigan-Flint high honors academic achievement award presented to no more than 13 students at commencement ceremonies held each December and May. Eligible students are those who have attained an overall grade point average of 3.75 heading into their final semester of study. University departments are then notified of students in their academic programs who are eligible for the award and professors in these departments can nominate students accordingly. Along with professor nomination letters, students must submit a personal statement and an updated résumé to UM-Flint’s Scholarships, Awards, and Special Events Committee. If a graduate would like to serve as the student speaker at their commencement, they must also interview with the committee. From here, the Committee chooses the student speaker from the finalized Maize & Blue Award recipients.

Since UM-Flint’s graduating class is ever increasing, two spring commencement ceremonies were introduced a few years ago, which demands two student speakers from the 13 chosen Maize & Blue recipients. For the UM-Flint Spring 2013 Commencement Ceremony, the honor of being student speaker was conferred on Zachary Murphy and Patrick Williams.

A graduate of Howell High School, Zach Murphy originally wanted to attend U of M in Ann Arbor but with application deadlines fast approaching, he applied instead to UM-Flint and was accepted. Still hoping to transfer to Ann Arbor after two years, he became so involved at UM-Flint that he thought it best to stay in Flint for the full four years. Zach now holds a Bachelor of Arts in Honors Psychology and Mathematics and graduated with a 3.9 G.P.A.. This fall, he will attend the philosophy PhD program at Purdue University.

Zach’s involvement at UM-Flint included serving as president of the Running Club and the Philosophy Club. He says that the professors at UM-Flint “really got me through. They are willing to invest themselves in the students.” He names Dr. Maureen Thum, director of the honors program, and Dr. Jami Anderson, his advisor in philosophy, as major influences and helpers along the way. “I ran every application and writing sample I had by Dr. Anderson. This speaks to how much professors are willing to invest personal time and work. That personable aspect was what helped, and I wouldn’t have done all the things I did without being able to approach such a caring professor.”

Being an active college student on campus and in Flint set Zach apart from the more transient commuter students often associated with local colleges and universities. He looks forward to a publication like My City Magazine being around to “tell people what’s going on in town so students can stick around for things.”

Much like Zach, Patrick Williams obtained his Bachelor of Arts with a 3.9 G.P.A. He majored in social work with a minor in substance abuse treatment. He plans to attend the Master of Social Work program at the Michigan State University extension on the Mott Community College campus.

Patrick is as nontraditional as they come. Originally from the Flint area, he served a brief stint in the military after high school, only to be dismissed due to behavioral issues. He then navigated from shelter to shelter throughout Texas before migrating to Munsey, IN at the age of 24. It was at this point while staying at a Christian shelter that Patrick was able to overcome drug addiction. During that three-year period, Patrick got his first chance to work in treatment services with other addicts who were trying to get clean. But old habits die hard, and Patrick relapsed. He found himself at the end of his rope and says that at this point, he says he wanted to “hurt himself.” He purchased a firearm and fired a shot. Miraculously, he survived the wound but now wears an eye patch to cover the damage. Patrick’s survival gave him the sense that he’d been granted a new lease on life; so he quit drugs altogether, became a Christian, and moved back to the Flint area to be near his family members who were still in town.

Returning to Flint meant returning to school, but after so many troubled years, Patrick was apprehensive. He says that his “fear of failure” kept him on top of his studies. This persistence earned him the high marks with which he graduated. He began assisting other students in the Social Work department, which he considers a part of his “ministry.” With such a rough past, Patrick now looks forward to helping others, and especially youth, as a career. He mentors a few teens in town through mixed martial arts training, and is very active at his church, The Bridge. “I want to be a positive influence on youth and an example of Christ,” he says.

What’s amazing about Maize & Blue awardees is their dedication not only to their studies but also to helping their community. My City Magazine applauds Zachary Murphy and Patrick Williams for being amazing examples of students with high academic achievement and noteworthy character.