In the early spring of 2011, a 64-year-old Rod Studaker thought the highly-successful softball coaching career he had launched some three decades earlier was beginning to wind down. After compiling a 422-155 high school record at Montrose, Lakeville and Millington, winning a fair share of league, district and regional titles and reaching the state semifinals twice, Studaker accepted Mott Community College Coach Barry Hershon’s offer to join the staff for his final season. “Barry said he needed an assistant coach for a year and knew I was available,” Studaker recalled. “I had no idea what was going to happen after that.” 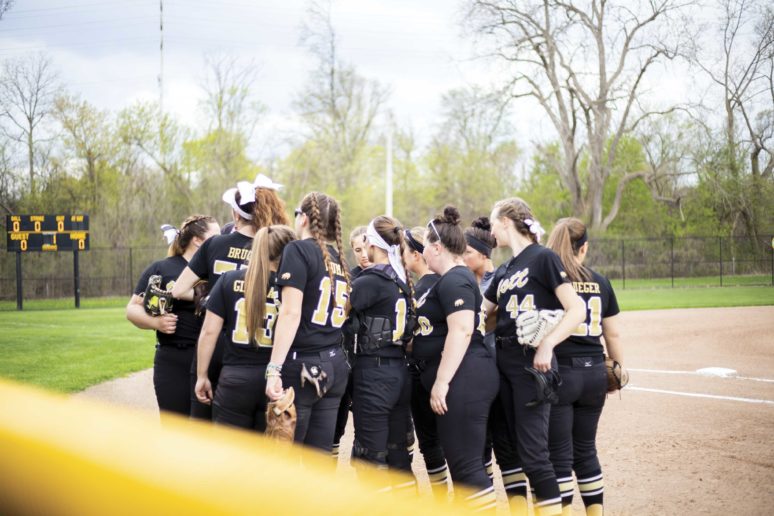 Under the impression he was just settling into an assistant’s gig, Studaker reported for duty and Hershon hit him with an unexpected proposal: not only was the 2011 season going to be Hershon’s last, but he was not planning to recruit any future players. And one more thing: Hershon asked if Studaker was interested in taking over the program.
Dive right back into head-coaching waters? Studaker was unsure about it, at first. After all, there is more to running a college team than a high school one, and the Bears were coming off a historic 2010 season in which they captured the regional championship and produced the program’s first All-American (Bridget Miller). Could he sustain that success? Studaker was sure, however, that constant roster turnover at the community college level (players are only eligible for two years) meant finding players to bring in the next season was crucial to the program’s future. Despite being a recruiting novice, Studaker jumped right into the role. All the connections he had formed while coaching began paying off. “I remember telling my wife I wasn’t sure about being a head coach again, but then I would come home and say ‘hey, I just got (All-Stater) Mikayla Smith of Powers to commit,’” he says. “Another time, I talked about landing (All-Conference players) Jamie Howell of Flushing and Justine Powers of Owosso. Finally, she told me ‘just shut up – you know you’ll be coaching that team next year.’” 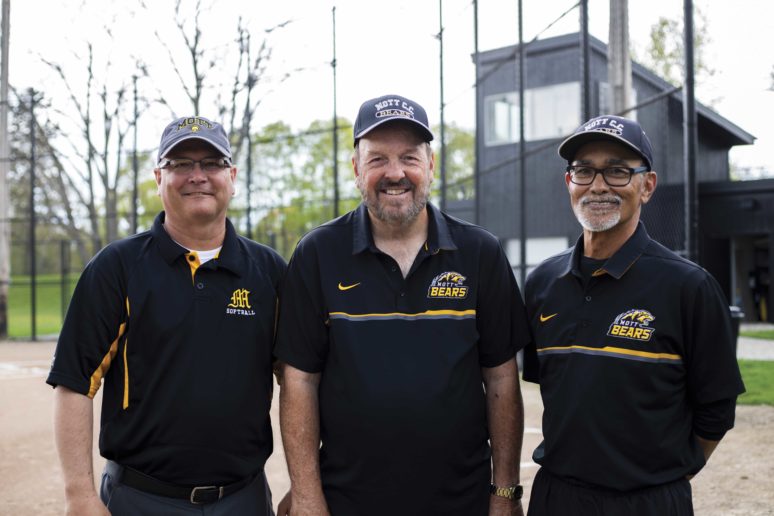 At the end of that season, Studaker excitedly succeeded Hershon as head coach and today, it’s obvious that the now 72-year-old is feeling better than ever about the decision. And with good reason. In eight seasons, he has guided the Bears to a 223-129 record, including four Michigan Community College Athletic Association Eastern Conference and three regional championships along with three trips to the National Junior College Athletic Association Tournament and the first state title in team history. In the past six years, the program has produced three All-Americans: Hunter Conzelmann, Kayla Ward (Lake Fenton) and Kendall Densmore (Davison).
Mott has also been a championship team academically during Studaker’s tenure. The Bears team grade point average is 3.43 this season, meaning they are a lock to earn Academic All-American designation for a fifth straight year. “Much of our success comes down to recruiting players who will be a good fit on the field and excel academically,” Studaker says. “As a coach, not having to worry about players staying eligible is huge. Our past record, how well-kept Mott’s campus is and that Mott is highly-rated with solid programs like criminal justice and nursing is also a big factor.” 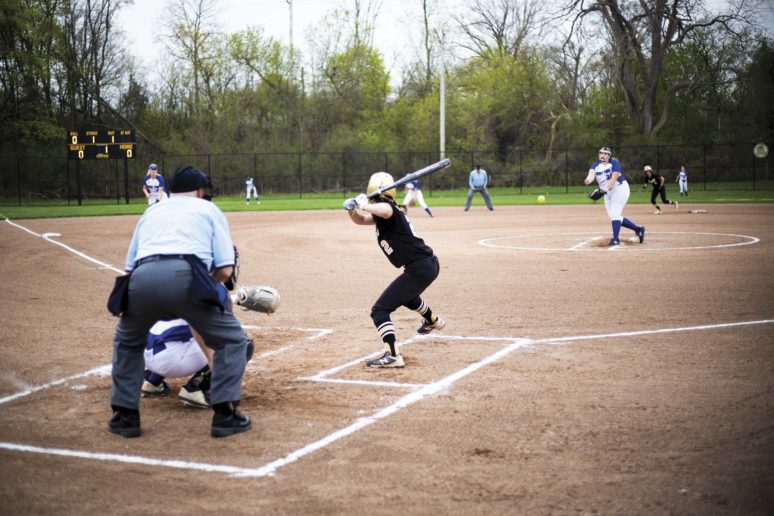 Assistant coaches like Tom Weston have also played a major role in turning Mott into a perennial championship contender. He led Lakeville to a 213-94 mark in nine seasons before joining the Bears in 2014. “You can call Tom my assistant, but we are equals in coaching the team,” Studaker says. “We coached together the one season I was at Lakeville and I’m very thankful we can work together again with the knowledge he brings.” Terry Warner, another former Lakeville head coach, joined the staff this year. He coached the Falcons to District titles in 2002 and 2003.
Mott concluded this season by going 2-2 at the regional tournament and finished 28-17 overall, 18-10 in the Conference, good for second place. “I like the way we finished to get second place and qualify for the state and regional tournaments, but that was certainly more losses than we’d all like to see,” says Studaker, a 2004 Michigan High School Softball Coaches Hall of Fame inductee. “We were very tough to beat when we put all three phases – hitting, pitching and defense – together in the same game, but had trouble doing that at times and lost some close ones.”

“ I will continue doing this as long asI can because I still enjoy coaching, still have the itch.”
Coach Rod Studaker

Said sophomore Right Fielder, Lizzy Kendziorski: “We started the season well in Florida (6-0), but then hit a slump before fighting back to play pretty well going into the regional. We were outstanding when we put it all together.” Mott ranked among the country’s top 40 teams in several categories, including triples (19th with 16), shutouts (20th, 9), doubles (25th, 95) earned run average (28th, 2.99) and extra-base hits (38th, 126). 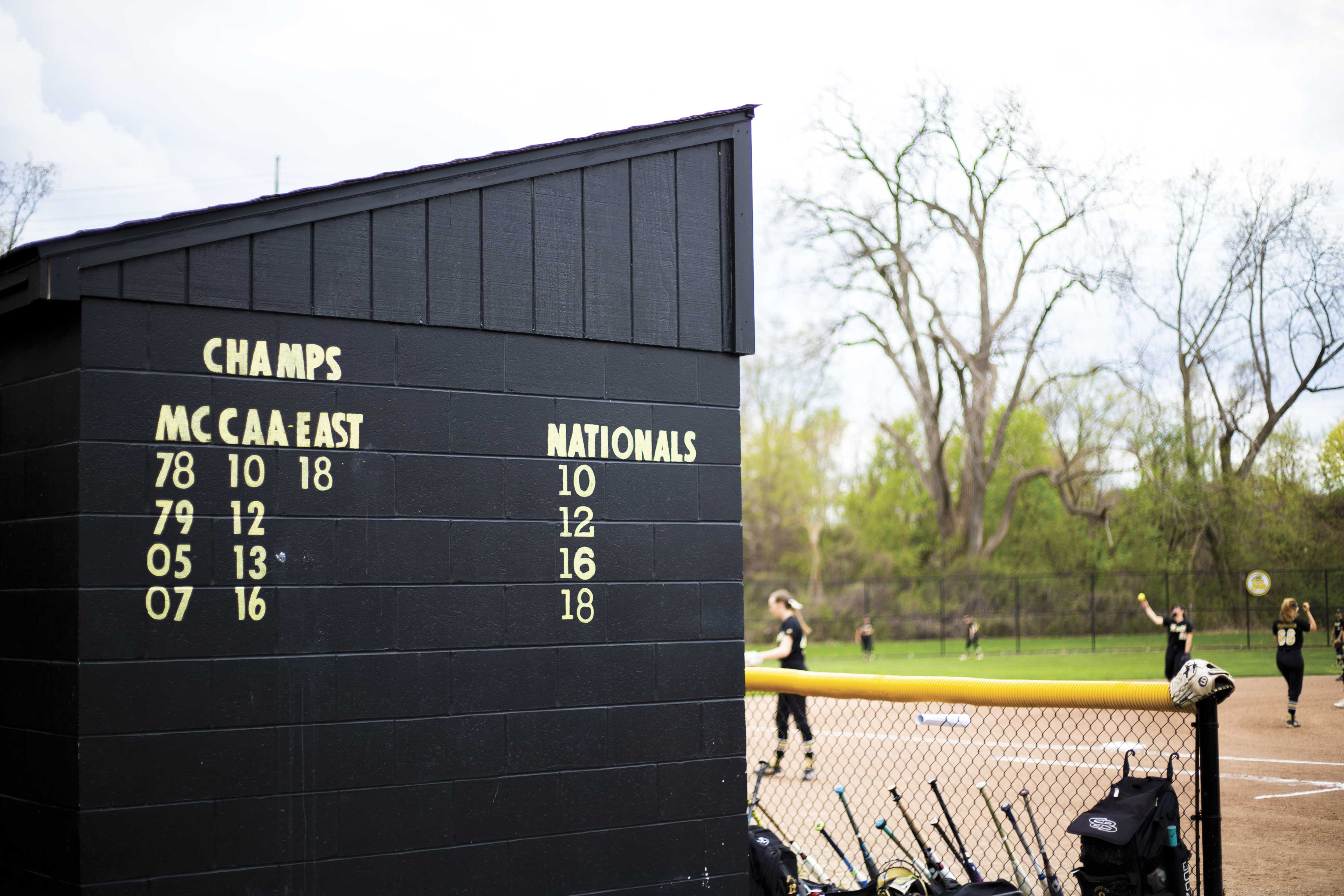 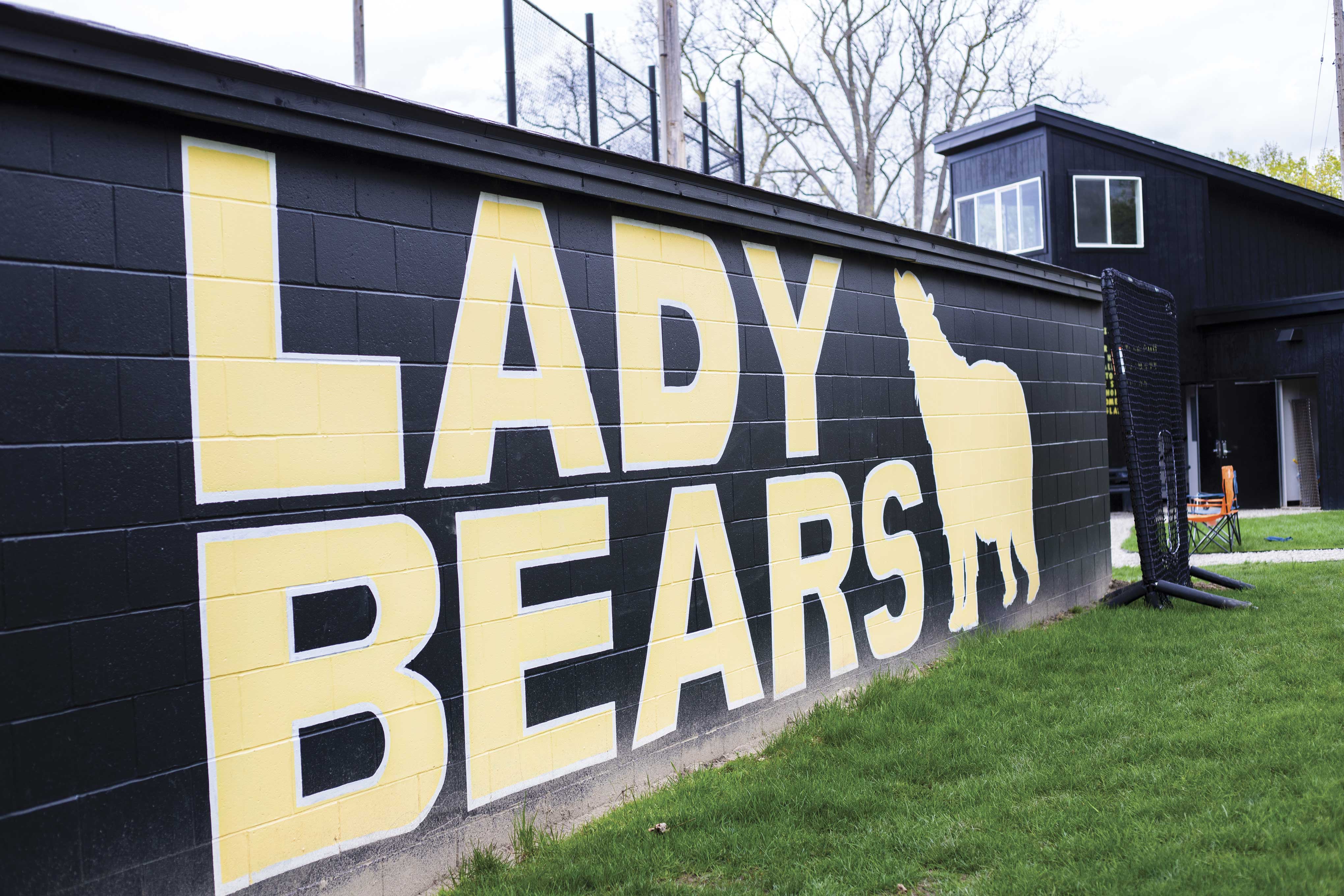 Kendziorski, a First Team All-Stater at Alpena High School, is a perfect example of how wide a recruiting net Studaker casts. In fact, the roster includes players from eight Michigan counties. “That’s one thing I learned – don’t be shy about going after players from outside the area,” Studaker says. Kendziorski was named First Team All-Region for the second straight year and First Team All-Conference after making the Second Team a year ago. “Lizzy has exceptional speed and was never actually caught stealing this year, only called out twice for attempting to steal too early,” Studaker says. “She covers plenty of ground in the outfield, has a great arm and delivers at the plate.”
Not bad for someone who was unsure about playing college softball. “I was planning to attend MCC for academics and was iffy about playing softball, but coach Studaker came to one of my summer team’s games and convinced me,” Kendziorski says. “I’m glad he did, because playing here has been great. I improved as a player and made some awesome friendships.” 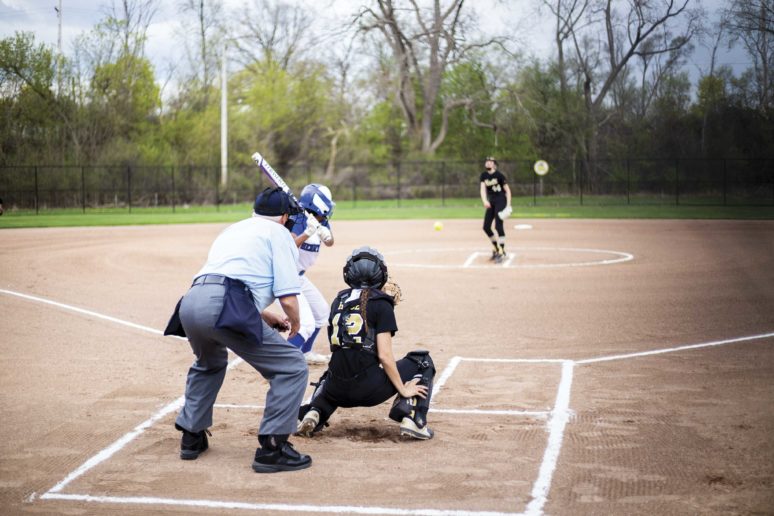 Freshman Shortstop, Kayla Rabeau (Rogers City), another long-distance recruit, swung the most powerful bat this spring. Last year’s State Division 4 Player of the Year was the team’s top hitter (.393 average) and finished 21st in the nation with five triples. She made First Team All-Region and Second Team All-Conference. “Tom (Weston) saw Kayla playing at a tournament, immediately called me and insisted I see her play the next day,” Studaker says. “She has amazing hand-eye coordination as a hitter, making her so tough to strike out. Kayla loved Mott when she visited and that sealed the deal. We offered her a nice scholarship.” Utility player, Taylor Rueger (Millington), hit .368, drove in 34 runs and scored 25. She was named First Team All-Region and First Team All-Conference.
Center Fielder, Morgan Zackiewicz (Taylor Kennedy), last year’s Conference Player of the Year, First Baseman, Nicole Sieler (Monroe) and Left Fielder, Allison Petts (Lake Fenton), received Honorable Mention All-Conference for their contributions throughout the season. 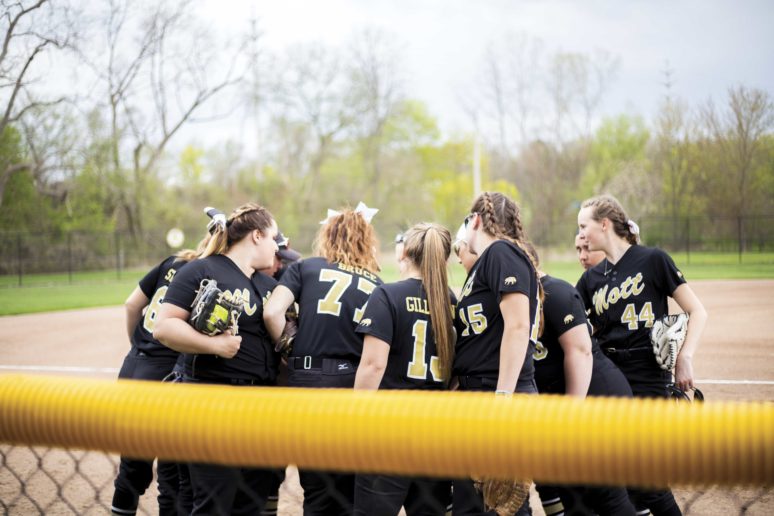 Mott lost its entire pitching staff from last season, but freshmen Rachel Mackey (Swartz Creek) and Kierstyn Muma (Grand Blanc) more than filled the void. The team’s ERA actually fell from 3.69 to 2.99. Mackey, who made Honorable Mention All-Conference, was the Bears’ workhorse, pitching 141 innings, 37th in the country, for a 14-9 record. “I had things I wanted to accomplish this season and was able to do that,” Mackey said. “I was looking at several colleges, but was sold on Mott when I visited and got to know the coaches. I appreciated how we bonded as a team.”
Studaker adds, “Having no pitchers returning, we asked a lot of Rachel and Kierstyn and they really responded. Rachel stayed in control most of the time and Muma was a solid No. 2.”
Studaker has no plans to miss a season anytime soon. “I will do this as long as I can because I still enjoy coaching, still have the itch,” he says. “Health-wise, I’m cruising.” Mott’s softball program is bound to continue cruising under Studaker’s steady leadership. 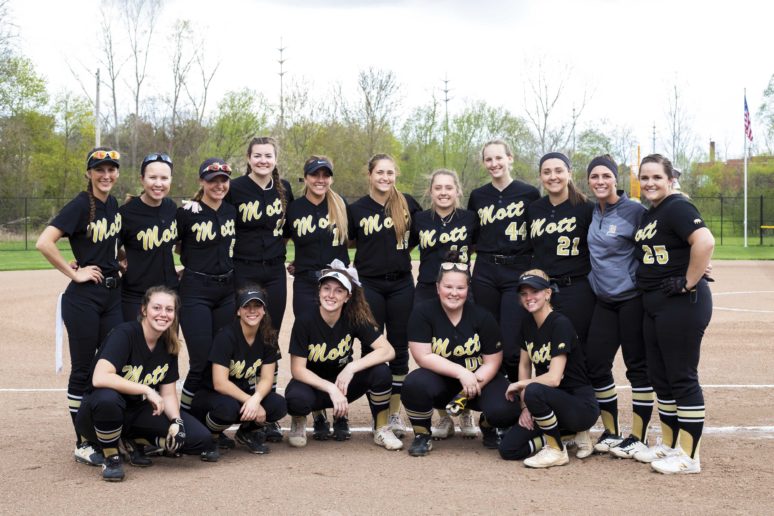