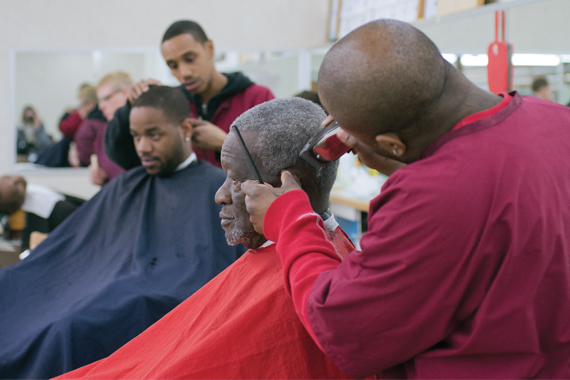 When’s the last time you had an old-fashioned straight-razor shave, or enjoyed a relaxing, hot-towel facial at the barber shop? Students at the Flint Institute of Barbering provide these services and many others to members of the community while honing their skills in the field of barbering. And what motivates Martha Poulos, the school’s owner and administrative director, to get up every day and go to work? Without any hesitation, her reply was, “The students.” My City Magazine spent a snowy February morning at the school, appreciating her motivation. A young, lively and very diverse group of students of all sizes, colors and backgrounds happily interacted with instructors and threw waves or kisses up to Martha as she observed them from her office upstairs. As the door opened and blasts of bitter air swept through the building, the students enthusiastically and professionally greeted each customer. And for a moment, the blustery day seemed just a little bit warmer.

The school’s Flint roots are long and strong. “My grandpa, John Leo Ayre, started the school in 1925,” said Martha. Originally named Flint Barber College, the school was located next to the Masonic Temple on S. Saginaw Street. It was closed from 1942-1946 during World War II, due to a lack of students. After the war, the school moved to Water Street and was re-named Greene’s Barber College of Flint; in 1952, it became the Flint Institute of Barbering. In the ‘60s, after Mr. Ayre died, the business was passed on to Martha’s dad, John L. Ayre, who moved the school to its current location on Flushing Road, a facility designed and built specifically to house a barber college. Martha acquired ownership of the school in 2006, having worked for her dad and grown familiar with the business. Today, Martha’s desire is to keep it running as it has for so many years. “It didn’t take long for me to just fall in love with the students,” she smiled. “They are the most important aspect of the school, and all business decisions are made to better their education and lives.”

Bob Morey is the school’s longtime educational director. He explained that in order to graduate, the students must log 2,000 hours of practice, half of which must include cutting hair. “Haircutting is the most important aspect of barbering,” Bob stated, adding that although students also learn to tint and relax hair, perform permanent waving and other professional services, the real emphasis is on the hair cut. “With the training they receive here, our graduates are qualified to work anywhere in the hair care trade, from traditional barbershops to full service beauty salons,” he said. Hands-on training is the key to education at Flint Institute of Barbering. “Our students learn by doing,” said Bob proudly. There are two educational departments: Junior and Advanced. “On the Junior side, students learn to take hair off,” explains Bob. As Advanced students, they learn to leave hair on as the emphasis shifts to hairstyling technique. Bob says many customers are now asking for more intricate haircutting, hair tattoos and artwork. And while many of the students have become adept at creating intricate hair designs in the newest fashion, Bob says he has also seen straight-razor shaves making a big comeback.

Josue Morales is in his last month of studies and is preparing for state testing. “It’s a great school,” he says of the Flint Institute of Barbering. “They teach you the right way to do things and they make sure you are ready to pass the state boards.” Morales specializes in hair designs, Mohawks, fades and high-tops. He loves attending Barber Battles, which are competitions held all over the country where barbers showcase their work. Student Nick Miller travels to Flint from Fraser, a near two-hour commute from the Detroit area. He reminisces about memories from his youth when he practiced cutting his grandpa’s hair and draws inspiration from the traditional style of barbering and straight-razor shaves. “I wanted to do something different,” he explained as the reason behind his choice to attend Flint Institute of Barbering.

When My City visited the institute, student Joelle Erskine was giving a straight-razor shave to Charles Pringle, a regular customer at the school for ten years. “Jo goes the extra mile,” he smiled. “When I leave here, I look good.” Joelle comes from a long line of beauticians, and she knows she is breaking tradition by becoming a barber. Other customers, like Tommie Williamson, 91, have patronized the Institute for years. Williamson says he continues to come because of the excellent service and results: “I get the best of service,” he insisted, “and I’m treated nicely here in each and every way.” The diversity at the institute is what student Michael Malcolm loves about it. A Flint native, Michael says that if he wasn’t enrolled in the program, he doesn’t know where he’d be today. “I’d be out there on the streets of Flint,” he suggested. “I see this education taking my life in a more positive direction.” Student Jermaine English hopes to one day own a barber shop, and he says the school’s instructors are great. “They all have different skillsets,” he said. “There is no other school like this.” Indeed, The Flint Institute of Barbering is something different and yet utterly Flint, helping its students better their lives through support and education.

See more photos HERE, or purchase photos from this story by going HERE and selecting the “Barber College” category.