In 2015, Phyllis Sykes and Adil Mohammed were having coffee together in Downtown Flint when they noticed a group of international students making their way across the street. The tight-knit bunch kept to themselves as they walked through the city together, wide-eyed. Both Sykes and Mohammed had similar thoughts: What is it like to be them – to get off a plane in Flint and make their way without knowing where to go? What is their experience? “The students were standing around and looking, and I thought that I would love to hear what they were thinking,” Sykes remembers. “I did some research and found out that area colleges were heavily recruiting international students. Adil and I then held a series of student focus groups and learned that they wanted to be engaged in the community, but didn’t know how. That’s when we realized that we really needed a service like the International Center for students and immigrants to connect with the community at large.”

“It was the same with the immigrant population, as well,” says Mohammed. “The issues were a little different, that’s all. Non-student immigrants were concerned with transportation and employment – they just needed a place to go for those types of information. That became our goal. The International Center’s main vision and mission is to be a resource hub for the immigrant population and a source of cultural interaction between the city and internationals.” Sykes and Mohammed created the International Center of Greater Flint to assist all immigrants to Greater Flint in getting acquainted with the community, each other and get established culturally, socially and economically. As Greater Flint becomes more attractive to immigrants, it is important to help them get on their feet.

“Flint has a declining population, but the one increase is in immigrants,” explains Sykes. “This increase is happening all across the Midwest. One benefit is the low cost of living. It can do wonders for the area to accept them, with all of their different cultures and ideas. We need to connect with them, and vice-versa. It shouldn’t be ‘us vs. them.’ We are all in the same boat, so let’s create an environment where we can work together. The more opportunities for engagement with different people, the more barriers come down.” 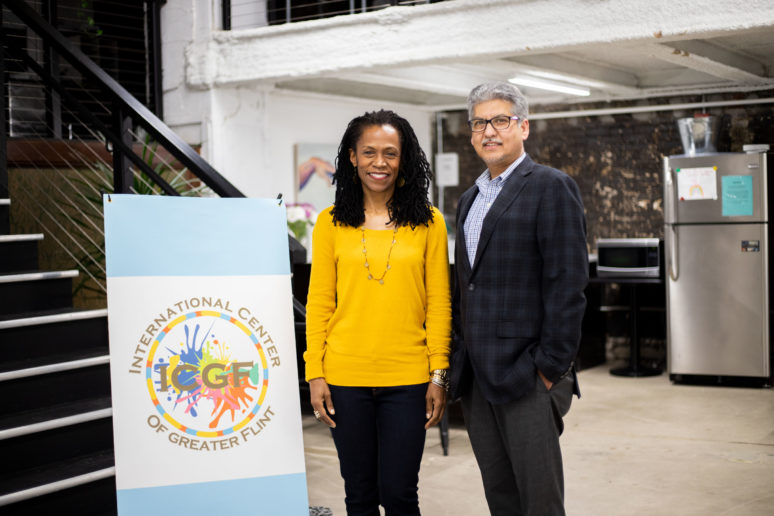 Mohammed is in complete agreement. “We have a large immigrant population here already, but you wouldn’t know it. We keep to ourselves. I am from India and a Muslim; I see both sides. For example, the Flint Islamic Center is full, but they are hidden. It’s the same for many immigrant groups here. There are all these pockets of disconnected people. We want it to be like the Olympics – the circles must interlock and if they are different colors, that’s fine. The strength in community comes with connection. You can still have your own group and be connected.”

In fact, the International Center of Greater Flint is living proof that cultural connection can be an important aspect of any community. In 2014, Sykes saw a flier produced by the Flint Islamic Center offering information about Muslim-phobia and common misperceptions. They were having an open house and realizing she did not know much about the culture, Sykes decided to attend. “It was freezing cold that Saturday night,” she recalls. “I couldn’t get anyone to go with me. I almost didn’t go, myself – I wasn’t even sure where the place was. But I went and it was life-changing.” While at the open house, Sykes filled out a comment card asking for a one-on-one meeting over coffee. Mohammed accepted her request and during a subsequent conversation, the idea of the International Center was born.

“My goal or vision is to make Flint an international city.”
Phyllis Sykes

In bigger news, the Center just received a grant from the national Gateways for Growth project. In this endeavor, the International Center will work directly with the city and it is exciting for all involved. “There are two organizations, Welcoming America and the New American Economy, that created a grant opportunity,” informs Mohammed. “They found that the only growth in Midwestern communities is the immigrant population, and found a formula that successful communities have used to become more welcoming to immigrants and refugees. They created the Gateways for Growth Challenge and we are one of 13 communities across the country that got it.”

For the program, the International Center and the City of Flint will convene a steering committee comprised of the different ethnicities in the area. The focus is on finding obstacles and challenges, then finding the best ways to overcome them. In order to start on the right foot, the International Center will relocate to the Ferris Wheel Downtown for the duration of the project. “We want to tie this into the Imagine Flint master plan because being a stronger community means being more welcoming and diverse. We want to strengthen neighborhoods and a part of that has to do with how welcoming you are to immigrants and how they perceive you.”

When asked what they want for the future of Greater Flint, both Mohammed and Sykes see a city and county that are examples of culture and diversity. “I want the International Center to be a catalyst to make Flint a destination by choice,” says Mohammed. “If anybody anywhere is thinking of coming to the United States, I want Flint and Genesee County to be on their list. It can be place-making. I want everyone to work together. For example, we have separate film festivals here in the city. Why not one international film festival? It could be a week-long celebration that brings people into the community. That kind of idea is what we are working toward.” 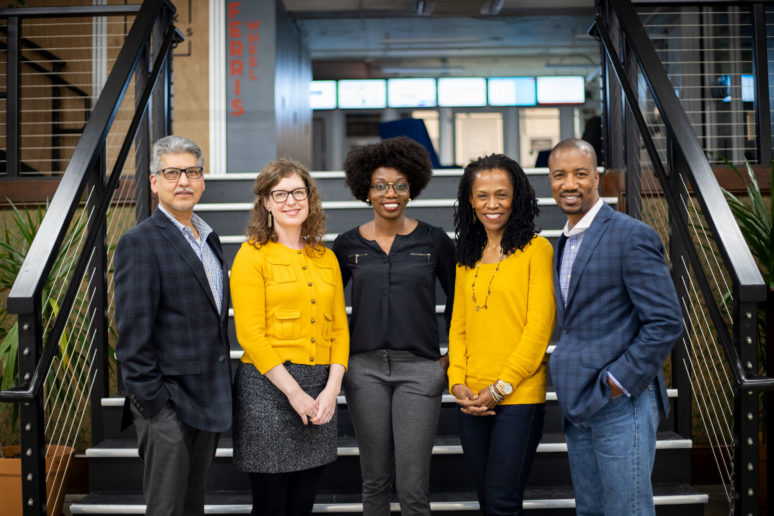 “My goal or vision is to make Flint an international city,” Sykes adds. “I want to work with other cities and countries across the globe to share information that will help both communities. We all need to work together to move forward. We can be both small and international.”

Both Sykes and Mohammed know that change is slow in coming; but both see vast improvements in acceptance in the county. It will take both sides coming together to truly make Flint and Genesee County a target destination. “It goes both ways,” says Mohammed. “We are not simply asking the locals to go out and meet the globals – we are also asking the globals to meet the locals. You can’t assume that it will happen, you have to deliberately make it happen. It’s a global community, now.”

If you would like to help Sykes, Mohammed and the International Center further their mission, visit icgflint.org/ to join or for contact information.