AtChristmas time, the sights, sounds and flavors of the Holly Hotel are a feast for the senses. The scent of rich cinnamon and cloves permeates the air along with the comforting aroma of baking bread and culinary concoctions. The century-old dining room gleams with rich mahogany, glowing candles, shimmering Christmas lights and old-fashioned decorations. “We want our diners to feel like they’re walking into someone’s home,” says Chrissy Kutlenios, who has co-owned the hotel with her husband George Kutlenios for nearly four decades.

In 1978, a two-year renovation of the hotel was undertaken by George and two other investors, with painstaking precautions taken to preserve its rich history – from lusty brawls and ghost sightings to an axe-yielding Prohibitionist. And while the history and ambiance are enticing, it’s the classic and creative American cuisine that Holly Hotel patrons say makes this a destination for the ages. George, the Executive Chef, is the driving force behind the food. “We run a very formal kitchen,” says Chrissy. Every Tuesday, George and his staff visit the farmer’s market, where seasonal fruits and vegetables are hand-picked. According to Chrissy, several of the signature entrées are made from the same recipes used since the hotel’s re-inception in 1978, including filet of beef Wellington, amaretto whitefish, chicken strudel, lingonberry duck, baby lamb and Norwegian salmon. The chicken strudel, which is Chrissy’s favorite, is made with shredded organic hen, broccoli, French cheese, euro cream, filo dough and served with a raspberry coulis. “It’s amazing!” she exclaimed. The beef Wellington is a customer favorite made with bacon-roasted filet mignon en croute, mushroom duxelle, Gruyère and demi-glace. 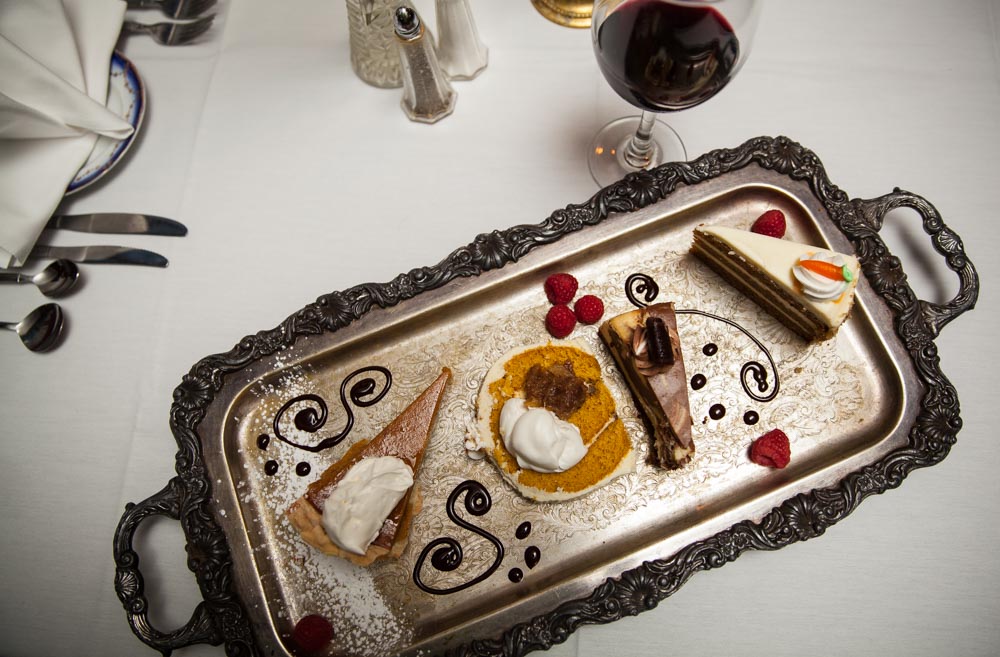 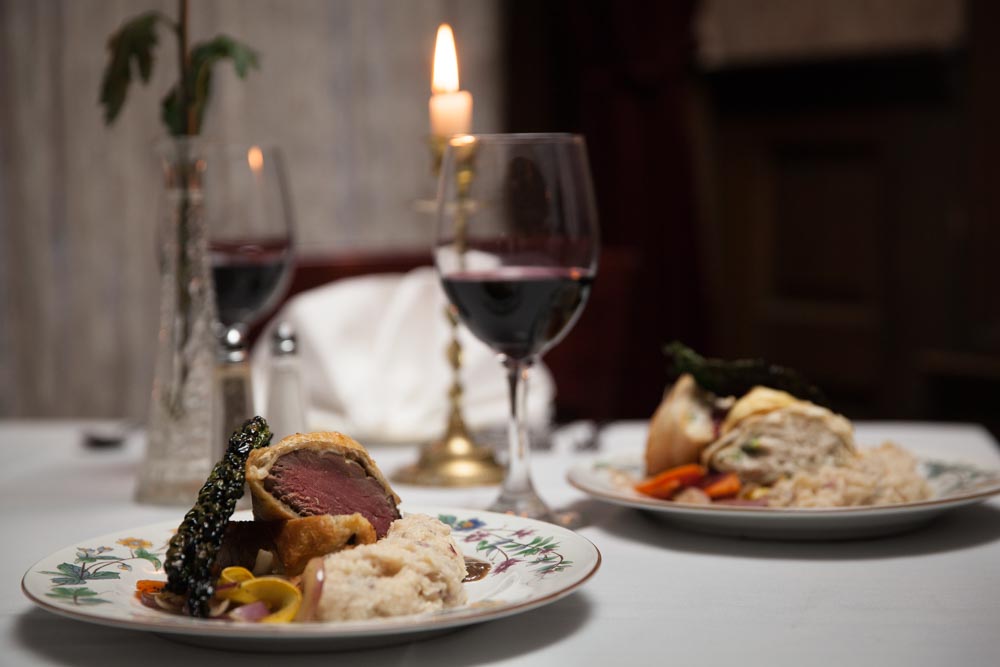 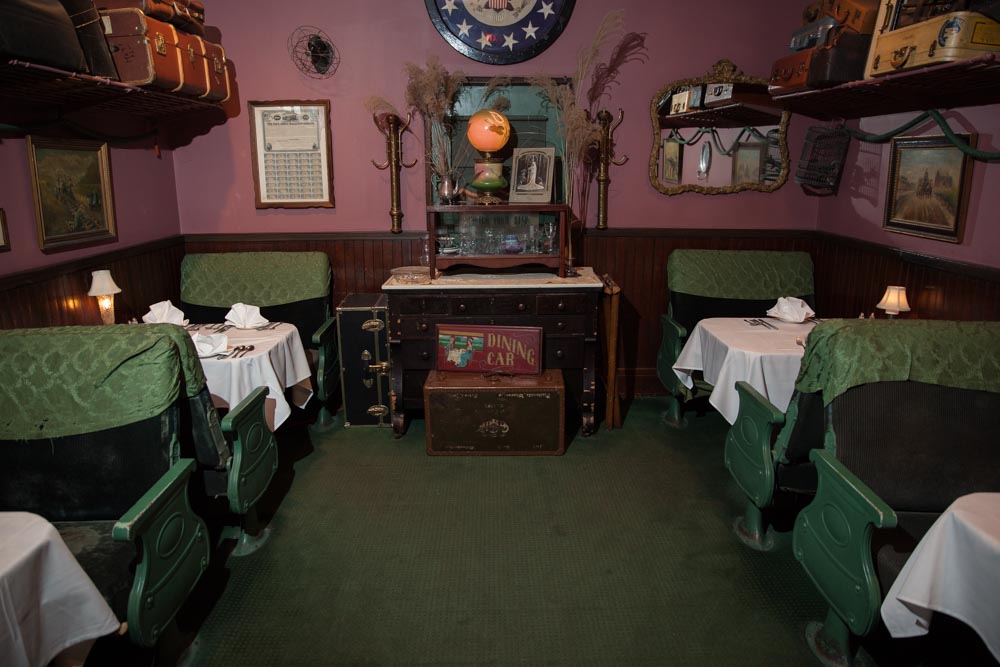 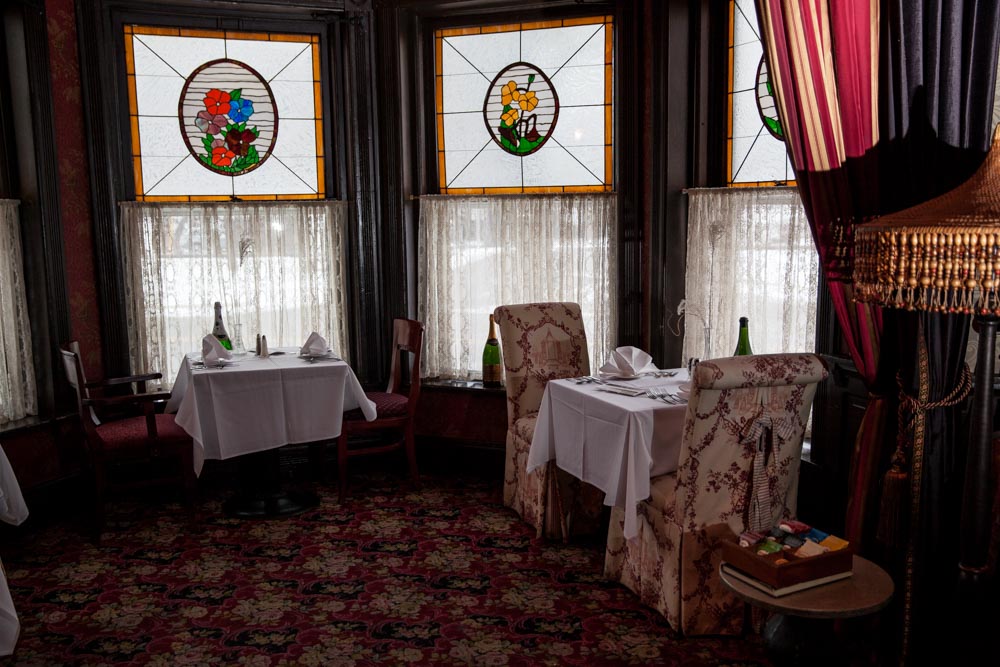 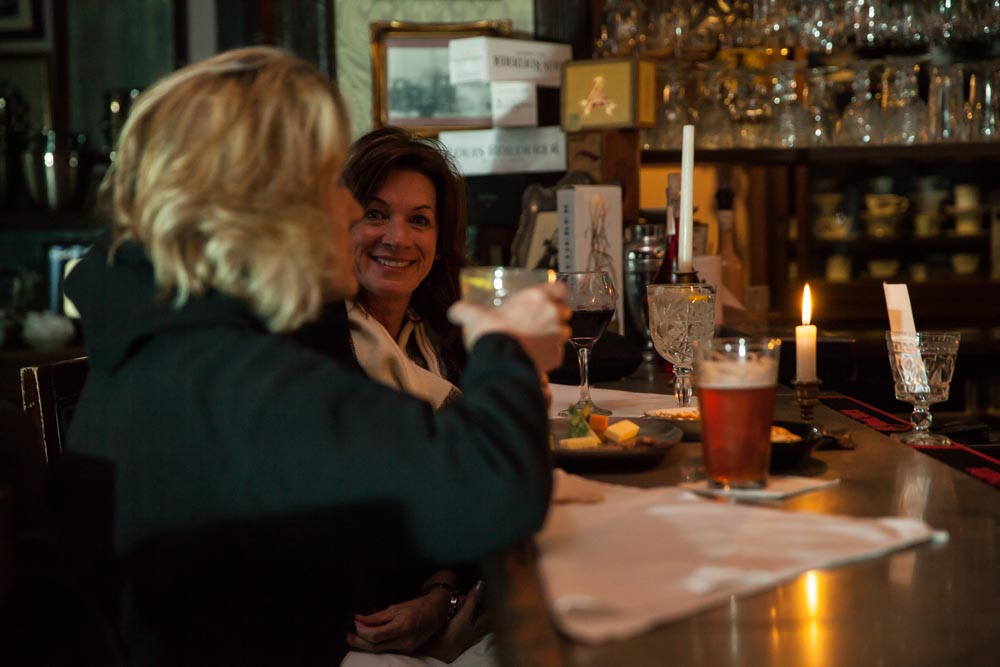 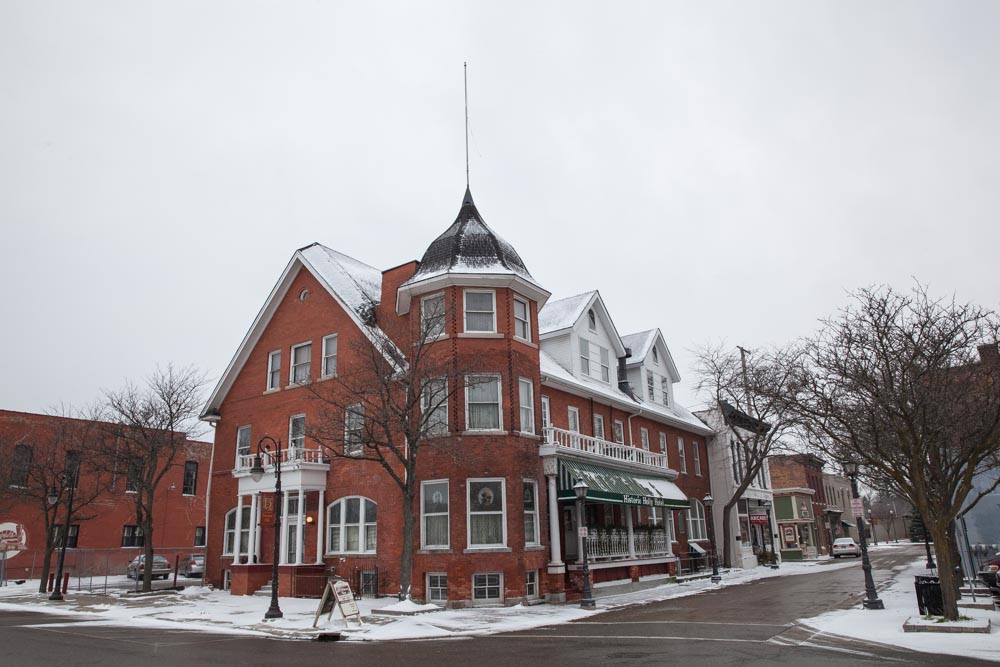 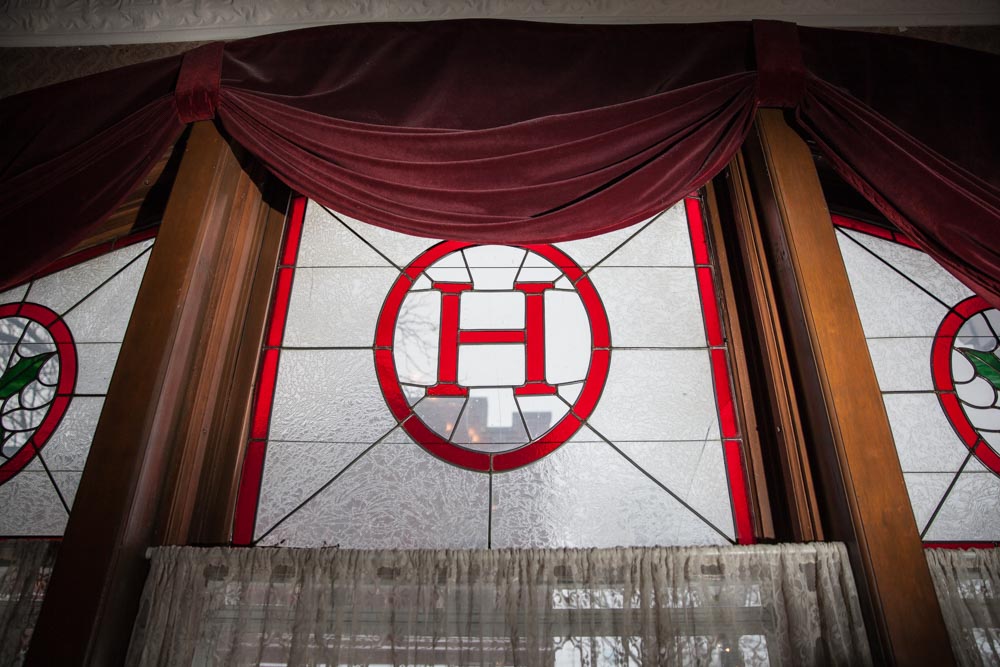 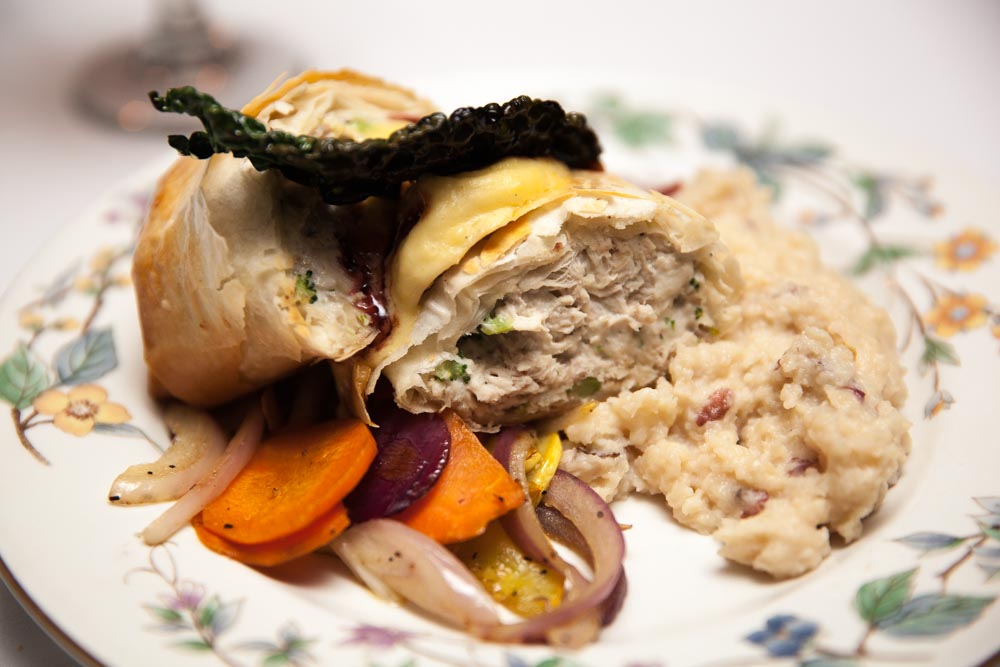 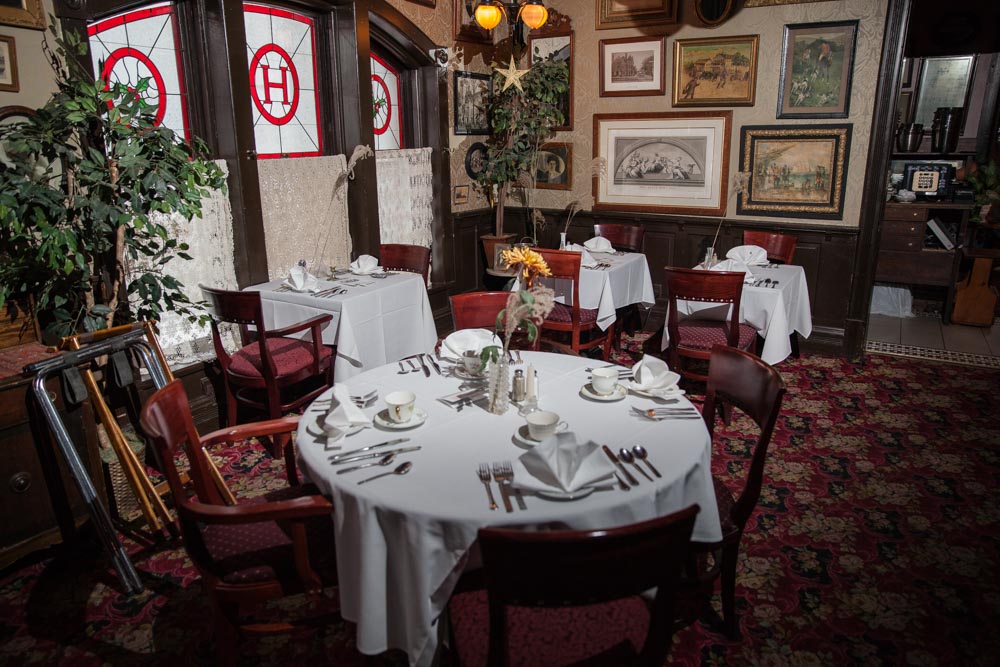 The menu changes daily with featured entrées such as beef cheeks served with ratatouille and butternut squash puree, and sole served with forest mushroom risotto and brandy basil cream. “Our chefs will also prepare an eight-course ‘degustation’ dinner, from appetizers to desserts, exclusively created for one table,” Chrissy says. “It is designed to make you incredibly happy.” A talented patissier fills the pastry tray daily with marvelous tortes, flans, mousses and gateau.

Monday through Saturday, an elegant afternoon tea is presented at the Holly Hotel, which Chrissy says is “very popular.” The three-course tea is served on antique porcelain and a private collection of china tea cups and silver service. A dynamic brunch is served every Sunday. The Hotel also offers an outstanding selection of more than 200 domestic and international wines, champagnes and liqueurs. While it’s more of a “destination” restaurant, what makes the owners the happiest is to see local folks come in to celebrate a special occasion. “That brings joy to us,” says Chrissy.

The first proprietor of the Holly Hotel was John Hirst, who named it The Hirst House upon completion in 1902. Joseph Allen of New York purchased the hotel in 1912 and re-named it the Holly Inn. One year later, in January 1913, the building’s second and third floors were completely destroyed by a disastrous fire. Allen began rebuilding and dubbed the new structure the Allendorf Hotel. Allen redecorated in the style of the Victorian period, using rich woods, luxurious velvets, lace and leaded glass. In the 70s, the Holly Hotel fell into disrepair. Exactly 65 years to the date and hour of the fire in 1913, the Holly Hotel burned again on January 19, 1978. This is when George began the process of making the Holly Hotel what it is today, a monument to the past and a fine dining destination. “The hotel today is truly a reflection of George and me,” says Chrissy.

In the dawn of the 20th century, the hotel was the hub of Holly’s social activity. With so many trains stopping in the little town, the bars and saloons that lined Martha Street were the scenes of near-daily brawls and battles. So many people were injured in the fights in front of the Holly Hotel that the locals called the street “Battle Alley,” and it stuck. On August 29, 1908 Carry Nation and her pro-temperance supporters brought their crusade to Holly, and began clubbing Holly Hotel patrons with their parasols. Carry herself, in a moment of wrath, smashed whiskey bottles with her trademark axe, which led to her incarceration at the hotel owner’s request. Today, George and Chrissy host an annual celebration of Carry Nation’s visit to the Holly Hotel with a special menu, a re-enactment of her visit and, ironically, reduced prices on libations. ♦

The Holly Hotel Comedy Club is a popular destination for fans of stand-up, offering headlining acts every Friday and Saturday since 1983.