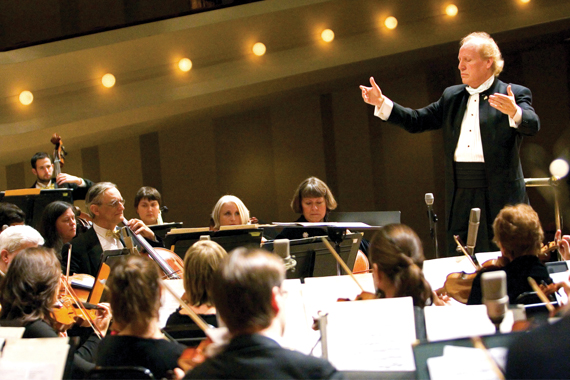 As the Flint Symphony Orchestra prepares for another season of musical majesty, My City Magazine was fortunate to speak with Enrique Diemecke, the internationally renowned conductor of many orchestras around the world, including Flint’s, who shared with MCM what the FSO has meant to him. Diemecke has spent the last 24 winters dazzling the city with the sounds of Beethoven, Brahms, Tchaikovsky, Mozart, and his personal favorite, Mahler. This year is his 25th with the FSO, and the whole city is celebrating!

In reflecting on the past quarter-century, Maestro Diemecke says, “It seems like just yesterday when I first came to Flint. Over the years, I have developed a relationship with the city that is based on mutual trust. It feels great to be part of the cultural life of this community, which has shown strength to overcome the challenges of the economic situation.” Flint has good reason to trust Diemecke’s commitment, for it dates back to his very first audition with the FSO. Tom Glasscock, manager of the FSO and a bassist in the orchestra for many years, remembers that fateful meeting. “It was clear to the orchestra and to everyone in the audience that this man had talent,” he said. “Diemecke was very good, and the decision to hire him was nearly unanimous, which is a rare thing.” Although the FSO wanted him badly, Tom says that many of Enrique’s family members and friends were doubtful. “Around the time he auditioned, Flint was getting a lot of bad publicity, and many acquaintances had advised him that it was not a good opportunity.” Enrique’s response was emphatic: he said, “Flint needs me here.”

Paul Torre, FIM President, says, “Enrique is Flint’s best ambassador. He talks about its people, their kindness and commitment – not only to music, but to the communities where they live – everywhere he conducts, and he conducts in most major cities throughout the world on a regular basis.” Despite his worldwide fame and extensive traveling, Flint holds a special spot in the heart of the Maestro. Of all the places he visits throughout the year, it is in Flint that he has a home, to which he brings his entire family every year during the holiday season. “We love to be there for the winters,” says Enrique, “and we love a white Christmas!”

As a musician, conductor, and composer, Enrique’s musical résumé is both extensive and impressive. Born in Mexico in 1955, Diemecke comes from a German family of classical musicians, a heritage he has lived up to and made proud in his lifetime. He began playing the violin at the age of six, and is a student of the legendary Henryk Szeryng. Not limiting himself to strings, Enrique learned to play the French horn as well, and continues to play these two instruments to this day. After attending Catholic University in Washington, D.C., Diemecke later studied with Charles Bruck at the Pierre Monteux School for Advanced Conductors. Since then, he has become famous the world over for his energetic conducting, his interpretation of the works of Mahler, and his original compositions, one of which was nominated for a Grammy Award in 1986. In addition to operating as the FSO’s music director, he also fulfills the same responsibility for the Bogota Philharmonic in Colombia, the Buenos Aires Philharmonic, and the Long Beach Symphony in California. This is not to mention all of the traveling he does to Europe, Asia, Australia and Latin America for engagements as guest conductor.

During the winter months, Enrique spends his days preparing the FSO for their concerts. Tom Glasscock remembers Enrique’s leadership during rehearsal, saying unequivocally that Diemecke makes each musician better by inspiring them to want to be better; however, he never pushes them beyond their limits. “Rehearsal can be very intense,” says Tom, “because we’re all trying to create the best sound possible. Enrique is very good about injecting humor when he feels that the tension is becoming unbearable. He’s very humorous, even in his gestures, but he is utterly devoted to the music, and that inspires us to push ourselves and have fun at the same time.” Passion and focus are the words to describe Enrique’s conducting style. “He’s the most prepared conductor we’ve ever had,” says Tom, mentioning how Diemecke’s repertoire is so complete that he rarely uses sheet music, “but when it comes to interpreting a piece, he just gets a feeling. He has a vision in his mind at all times about what he wants the music to sound like, and he’s skilled enough to bring that vision to fruition.” Paul Torre says of Enrique’s talent, “He has the innate ability to express his passion for the music being performed, and to inspire the musicians to play with the same passion, conviction and intensity. Together, he and the orchestra reach into the hearts of the audience, creating a beautiful, passionate, exciting experience for each of them. Few conductors in the world have this unique ability. It’s powerful.”

When asked which concerts in the past 25 years stand out as his favorite, Enrique refused to choose, just as he would not say that he looks forward to one concert more than any other on the schedule for this season. “Each concert is an irretrievable opportunity to enjoy the moment you’re in,” says Enrique. “You have to enjoy the moment you’ve been given, because that is the only moment you have.”

Both his passion and his joie de vivre are plainly visible when Diemecke takes the conductor’s podium. Unlike most conductors, Enrique does not use a baton. When asked why he does not utilize this tool, he replied, “Using my hands – it frees me. It helps me impart to the musicians the feeling of the music. It’s not enough to merely give a good performance. To mold a sound, to enunciate a phrase, to make a cadence, the baton is too rigid.” Enrique firmly believes that “music is the food of the spirit,” and as the FSO’s music director, he undertakes the responsibility of helping to nourish the spirit of the community. He says he is blessed to “have had 25 years of that” here in Flint.

Thanks to Diemecke’s leadership, the FSO has entered a Golden Age – or silver, as it were – of music making. Those who know are anticipating the best concert season yet. For those who have never seen a performance, consider Diemecke’s captivating entreaty: “We, the musicians and audience together, are part of the unique experience known as a concert,” he says. “We create the event of the week and we all want to be part of it. Flint has achieved this and I treasure it immensely.”