Thousands of runners will hit the bricks of Downtown Flint on the third Saturday in August – to run, walk or wheel in the 39th Annual HealthPlus Crim Festival of Races. While runners from all over the world participate, the heart and soul of this event are the dedicated competitors from the Greater Flint area, who return year after year, and are proud to call Flint home. According to Race Director, Andy Younger, some Michigan runners will be recognized this year with a special “Made in Michigan” award. “And there is so much talent right here in Flint,” Younger says. Runners registered in the 39th annual race have a chance for a guaranteed spot next year in the 40th annual milestone, at which they are expecting a record-breaking number of participants. My City Magazine caught up with some of the local runners to talk about their dedication to the Crim and their hometown.03

Assistant Race Director, Joe Dimambro, says there are many talented individuals who have supported the Crim since its humble beginning. “There are runners who have been able to stand the test of time, generation after generation, right here in Flint! 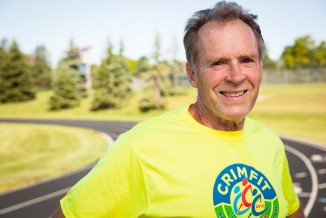 Tim Giles is one of the original Crim runners, according to Andy. Tim grew up in Flint and attended Northern High School. “I grew up in the streets of Flint,” he explains. “Flint was a vibrant town and in its heyday back then.” While in high school, Tim was on the track team and found out he was pretty good at running. In the early 70s, there were no local races, so he and his brother would just run for fun. “When the first Crim race was announced in 1977, I was really excited and I signed up for it,” says Tim. There were just 750 runners that first year. “It was brutally hot and humid and the race didn’t start until noon,” he recalls. The weather took a toll on many of the runners. He remembers Bill Rodgers was favored to win the race, but Bill got so overheated, he stuck his head in a bucket of water to cool down. Steve Kenyon from England won the race. Despite the weather conditions, Tim returned the next year, and every year after. “I never had a goal to run all the Crims,” Tim says, “I just like doing it.”

Tim trains year-round with a training group. “We’ve been running together for years,” he says. “There are some really great runners in Flint.” And of course you can’t forget about Bobby Crim, the race’s founder and namesake. “Bobby Crim is running great!” says Tim, who recently ran a race with him in Fenton. “He will be at the Crim, and he is unbelievable.” The Crim has become a family event for Tim, with several of his children and grandchildren also running. “In my opinion, the Crim is way more than a race,” says Tim, “it’s the biggest event in Flint; it’s something to brag about.”

Avid runner, Michelle Dvorak, has been running the Crim 10-mile road race since 1989. She is known to many as Cat Woman. “I actually rescue domestic cats,” she laughs. Michelle grew up in Corunna but has lived and worked in the Flint area since she was 22. A medical technologist, she previously worked at many of the old Flint hospitals and is currently employed at Genesys. This year will be her 27th year running the Crim and she is looking forward to it. Her sister, Janeen Dvorak, has been participating for over 30 years. “We have always been active and were always running when we were growing up,” laughs Michelle, “Our mom would never let us sit down.” While she doesn’t officially train for the Crim, she runs every day, year-round. “Running to me is a way of life,” she says. “Running sets you free.” She has many friends who will join her for a daily run.

Crim Day is her favorite. “I love getting there early to watch everything come alive. I love seeing it unfold.” Michelle says she likes to watch 30 runners at the start line, and prefers to start her race in the back. She joins hundreds of runners from the Flint area who love the race. “With or without all the international runners, it would still be a fantastic race,” she says.

Herman Graham is 84 years old and still running strong. “Herman is an outstanding runner and a great person,” says Andy. “He also teaches Bible study classes, and wins his age division every year.” Herman said he started running in his thirties. “I think it is a wonderful event,” he exclaimed. Some people think it is somewhat unusual for an 84-year-old to be running the ten-mile race. “Younger runners say to me, ‘I hope that when I am your age, I’m still running,’” he laughs. Herman runs in the training group with Tim Giles. “It’s a great group of people,” says Herman. Running helps him stay fit, but he also watches what he eats and maintains a diet that includes fruit, vegetables, and grains. He doesn’t take any medications and has no major illnesses or medical problems. He is looking forward to the upcoming race. “It’s the fellowship I enjoy the most, the joy and the fun of running together,” Herman says, “but it’s the crowds of cheering fans that get me to the finish line.” 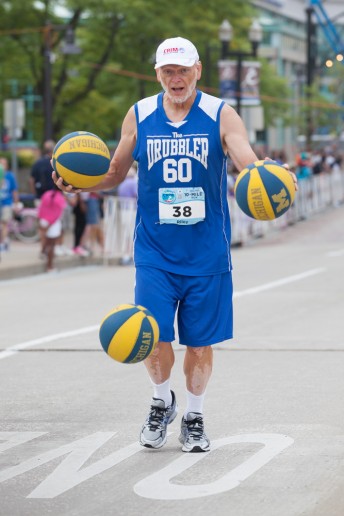 Some Crim participants stand out more than others, and one of them is Riley McLincha. Riley, who grew up in Clio, has run in the race since its inception in 1977. It was the year his mother passed away due to a heart attack. As a result, he began looking for a way to get fit and stay in shape. When he heard about the Crim he started training for it. At first he could only run about two miles, but he continued to train and after the first race, he was hooked and came back every year since. Riley is known for “drubbling” a basketball while running the Crim. Drubbling is a word he made up – a combination of juggling, dribbling and jogging. Why does he drubble? “The first ten years I ran in the Crim, I ran as hard as I could and I got too serious about it,” explained Riley. The 1986 Crim Race was dubbed the Crim Swim due to a downpour that flooded the streets, thus affecting everyone’s finish times. The following year was when he started drubbling. “I had to do something to distract myself,” he laughs. Riley is a big promoter of Downtown Flint and spends a lot of time there. “Flint is my hometown,” says Riley. “To me, Crim day is the best day of the year, the day I look forward to the most.” He may or may not be drubbling the basketball this year, but one thing is for sure, he will be running in the race he loves.

Harry Garrison, a retired GM worker, has participated in the Crim as both a runner and a walker. “He is a perfect example of a person who didn’t let a medical issue get in the way of being fit or competitive,” says Andy Younger. Harry underwent a bilateral hip replacement eleven years ago. He could have ran, but decided to walk the Crim instead. “This year will be my 31st race – 20 years as a runner and 12 as a walker,” he says. He trains twice a week with a competitive advanced group and says it’s a good way for people to get off the couch. “It helps you stay healthy and it’s good for Flint,” says Harry about the Crim. “The third Saturday in August, thousands and thousands of people come to Downtown Flint. I’m proud to be a part of this.”