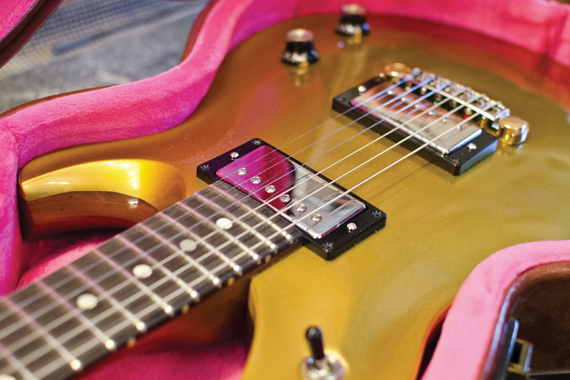 Often the words “Made in Flint” evoke images of cars on an assembly line, but the city boasts several more top-of-the-line products that are made right here by the hands of extraordinarily talented individuals. One such individual is Ron Luczak, whose handcrafted guitars are renowned the world over.

Luczak grew up between Mount Morris and Clio, and moved to Flint as an adult. He has long been a guitar enthusiast, but unlike most lovers of the instrument, Luczak decided to act upon his predilections in a different way. “Everyone plays, but no one builds,” he smiles. With only the experience of a high school woodshop class and a strong desire within, Luczak tried his hand at fashioning a guitar for the first time back in the early 1980s with reasonable success. Perhaps it was natural talent, or perhaps a confluence of several outside factors. It was around this time that Luczak worked at the musical instrument repair shop of legendary jazz musician, Sherm Mitchell, and he fondly recounts time spent soaking in the advice and exceptional talent of local giants in music performance. “That was such a cool place back in the day,” he says. “The caliber of the musicians around here was great, and a lot of those guys didn’t even care for the fame.”

After working at Sherm’s, Luczak worked for eight years at Backstage Audio, and went on to a job in the warehouse of the Flint Journal, honing his craft while earning a paycheck to pay off his house. Just before the newer printing press for the Journal was completed, and having a growing client base and reputable skill, Luczak remembers his epiphany: “I finally admitted to myself that I was good at what I do.” He thought, I have worked for the man punching the time clock for half of my life; now I’m going to work for me. Thus, Ron Luczak, the full-time professional custom guitar maker, was born in 2005.

With 30 years of experience and nearly ten years on his own in the business, Luczak has clients from various American states and other countries as well. Recently, he’s been building an axe for a guy in Japan. He can fashion an acoustic or an electric instrument with the same precision. His guitars carry a heavier price tag than what one finds in a chain retail guitar store, but nothing less would be expected for the handcrafted quality of a Luczak guitar. He starts with the finest cuts of wood he can find, and everything from the paint to the glue is top quality. At first glance, someone without much knowledge of how a guitar should sound and feel would not think much about the effect that paint and glue can have, but those well versed in the instrument’s makeup would be the first to acknowledge the damaging effect of cut-rate components. In an effort to get away from the mass production aesthetic of most guitars at larger chain shops, Luczak hand paints several coats on each piece using an “old school” lacquer during his process. Painting one of his guitars can take him several months in order to achieve the right finish – this after the mere one week it takes to fashion the body of the guitar out of wood. Luczak even regards his glue as “old school,” since it is animal-based glue that has to be “cooked up” and has a “bad smell,” but he prefers it since it’s the type most often used in the manufacturing of high-end violins.

“I want to do it the old way,” he smiles. “So much of the stuff you find in the stores is imported and cheap. Yeah, you’ll find a $300 guitar, but the sound won’t be any good.”

Luczak does most of his work from a non-descript house on the city’s east side. He still owns the first guitar he ever made, and when asked if he’d ever consider auctioning it, he says he prefers to hold on to it. “I wouldn’t want to part with it,” he said, adding, “I’d rather have that early stuff to document my story.” Luczak certainly considers himself a Downtown Flint kind of guy, so you’ll often find him with friends on the Downtown scene. From his view, Flint has been through a lot, but it pleases him to see where the city is going. His desire is “to see Flint do better,” and he counts it as “amazing” to watch the new things that work and the new things that don’t work around the city. A major supporter of locally made products, he often plays his guitars though Guytron amplifiers, which are built in Fenton by Graydon Stuckey.

Thirty years ago, Ron Luczak picked a battle with a piece of wood and won, and now his work, and his story, are the stuff of legend. If you are looking to go custom, high-quality and local for your next guitar purchase, go Luczak.

See more photos HERE, or purchase photos from this story by going HERE and selecting the “Luczak Guitars” category.