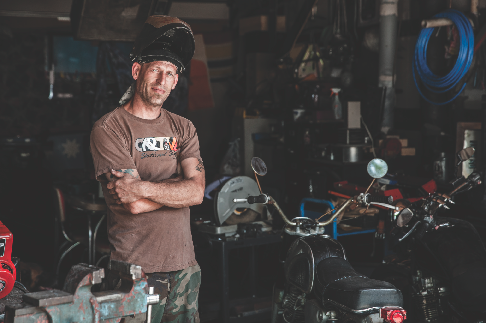 The words intriguing, salvaged and bizarre describe Todd Nikola’s art, if not the man himself. Sparks fly in a small workshop attached to a brick home on the corner of Miller Road and Ida Street. Todd is at it again, welding another of his unusual creations made from discarded metals. “I try not to pay anything for the materials I use,” he says firmly, “but if I do, I buy from a scrap yard where the metal has already been salvaged. It’s like it’s waiting there to become something else.” A man with multiple projects going simultaneously — “I’m kinda ADD that way,” he reports sheepishly — there’s more art coming out of the little shop now than ever before.

Two years ago, only a small portion of Nikola’s income originated from his art, while the majority came from home improvement and construction. Now, the opposite is true. “I hope to get to the point, in five or six years, where I can work on my art full time,” he said of his future.

Todd’s art reflects different genres, but regardless of genre, his favorite pieces are the big ones. “While the big pieces don’t sell the way I wish they did,” he said regretfully, “I still like working on them best.” Many of his larger pieces decorate his side yard for passersby to enjoy. Among them are some of Todd’s favorites. An example is Bonezilla, one of Todd’s three dogs (although the other two are furry, not metal). This metal version of man’s best friend was inspired by a rusty old lunch box sitting in just the right position, sparking a vision as bright as his welder. “It happens a lot like that,” he said of his process. “I spot something different, or something will catch my eye, and I build around that defining element.”
Other notable pieces include Over Dar Mon, which was his first piece chosen by the Ruth Mott Foundation for display at Applewood Estate, and Swinging Doors, which holds a lot of significance for Flint, according to its creator.

“Swinging Doors is an example of my architectural genre, wherein I find a number of the same thing and repeat them in patterns. It was made from the doors of safety deposit boxes at the Citizens Bank once located at Chevy-in-the-Hole. When the building was demolished, the safe was just left there,” Todd reported solemnly. “Scrappers were going in and taking things, and I thought to myself, I could at least preserve some of this history by using it in my art. So I did.” Despite the obvious significance, Todd says that his art is not designed to make statements. “I don’t want any part of that,” he commented. “I just make art to look at. My art doesn’t follow my agenda, or anyone else’s for that matter.”
Nikola says that as he journeys toward becoming a full-time artist, he plans to take his work on the road. “I am trying to build up a cache of work to bring with me down to Chicago, but I keep selling pieces! It’s a great problem to have,” he joked. Amongst his long-term goals, Todd’s current project is, according to him, “building a boat made out of garbage.” As part of his desire to see the Flint River Raft Race return to the city, Nikola is attempting to build a boat for under $100, to be used for judging the rafts. “I’ve always got a project going, and people call me crazy until it’s done,” he smiled.