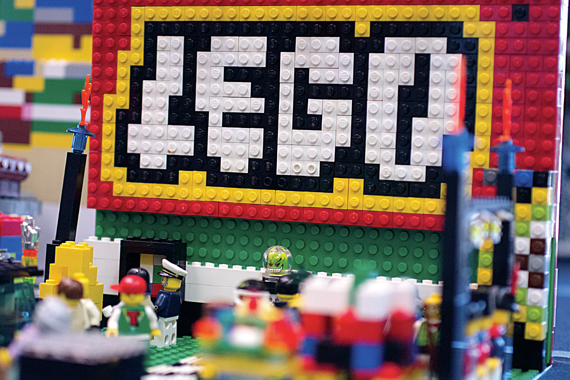 “Everything is awesome! Everything is cool when you are part of a team.” These are words from the theme song of The Lego Movie, a blockbuster since it hit the box office on February 7. And these are the perfect words to describe the Lego competition held at the Flint Institute of Arts on February 22.

The FIA’s College Town Student Advisory Council presented its fourth-annual “Create Your Own Masterpiece” Lego Challenge. Hundreds of spectators attended the popular intercollegiate event, which pitted teams from Baker College, Kettering University, Mott Community College, and the University of Michigan-Flint against each other. According to Janice Henry, FIA Marketing Coordinator, the idea came about seven years ago when FIA started its College Town Initiative. “It’s the only intercollegiate competition between the four schools!” exclaimed Janice. “It’s meant to be good fun and to create the college town environment we are seeking.”

Each college team was given 16,700 Lego pieces and three hours to build an artistic sculpture. The students were allowed to come in an hour early to organize the Legos by color if they chose to do so, Janice explained. Huge mounds of the colorful Lego bricks were piled high on tables in FIA’s Bishop Gallery. Students on each team worked together, concentrating intensely. Music provided by WKUF Kettering played in the background while supporters from each school watched the teams work fiercely to finish their pieces.

But the fun didn’t stop there! In addition to the collegiate completion, there was a junior competition for kids grades K-12. And following the message of the Lego movie, the kids were encouraged to “not follow the directions,” and come up with original ideas for their creation using their own Lego bricks. Eight lucky winners received a $100 FIA scholarship or an FIA family membership worth $50. One of the young competitors, Liam Malqueen 10, says he entered the competition because he loves art. A student at Central Elementary School in Flushing, Liam had a little mishap on the way to the FIA. He had spent hours building his masterpiece: the Sleeping Beauty Castle. “We went over a bumpy road when we were driving here,” he said, “and we had to try to fix it once we got here!”

At the end of the day, the team from Kettering University took the first place trophy for the third straight year. Their creation was a depiction of a bridge connecting two towers. Placing second in the challenge was Mott, whose students built an outstretched, rainbow-colored hand holding the Earth. The completed Lego masterpieces remained on public view in the FIA’s Bishop Gallery for one week, after which time a People’s Choice award was presented to the creation that received the most votes from the public. “This has been such a great program,” said Janice. “It engages students from all of our schools in the cultural offerings of the community and takes them beyond the boundaries of their own campuses.”

See more photos HERE, or purchase photos from this story by going HERE and selecting the “Legos” category.