Downtown Flint is bustling with activity! New restaurants are popping up, buildings are being renovated, and businesses are thriving. Busy professionals grab a hot cup of Joe to-go at one of the coffee shops as they hustle to work, while college students hurry off to class. Visitors from all over descend upon the Flint Farmers’ Market with its wide array of luscious fruit and vegetables, meats, cheeses, tasty treats and fabulous eateries. The swell of activity and revitalization in Downtown Flint has also brought a surge of people who choose to live in one of the new loft or luxury apartments that have become available in the last few years.

What’s it like living Downtown? What is the attraction? Is it the variety of food, events and festivals, the close proximity to one’s workplace that leads some to make their homes in the heart of the city and Cultural Center? My City Magazine chatted with a few residents to find out what it’s like living in Downtown Flint, and why they chose to do so. The answer to all of the above questions was a resounding, “Yes!” 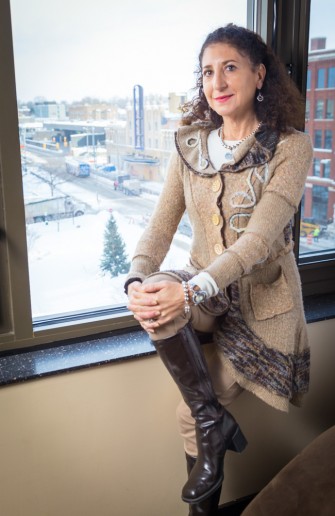 This Flint native lives, works and plays in Downtown Flint. Her family’s business, Gazall Lewis & Associates Architects, has been Downtown for almost 50 years. The Gazall family grew up in the Mott Park area and Kathleen had purchased a home near there, where she lived for about 16 years. About six years ago, a loft apartment became available in the Rowe Building. “I sold the Mott Park home and moved Downtown!” Kathleen exclaims. “Everything I need is here.” Her fourth-floor loft has a spectacular view of Saginaw Street and all the activities that go on there. “The Crim finish line is right outside my window,” she reports.

The two-bedroom loft is 2,200 square feet with a 25-foot ceiling. “It was important to me to keep the urban feel of it and make it cozy at the same time,” Kathleen explains, adding that she sold her car about three years ago. She buys groceries at the Farmers’ Market, The Local Grocer and Ground Floor Market, which are all within walking distance. “If I do need to go somewhere not walkable, I have great friends and family to scoop me up,” she says.

Loft-living is conducive to Kathleen’s lifestyle, as she’s always on the go. She socializes with friends at her favorite places – Cork on Saginaw, Blackstone’s, Torch Bar & Grill, 501 Bar & Grill, Churchill’s, Soggy Bottom Bar, and Steady Eddy’s at the Market. “People Downtown are like family to me,” says Kathleen. “When you walk in, they greet you with a smile; it makes you feel that Downtown is your home.” 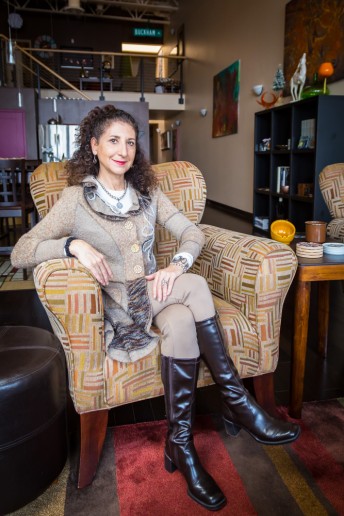 Kathleen is actively involved in her community. She is the chairperson of Friends of the Alley and volunteers at many Downtown happenings. “I want to move Flint forward and it is important to me to help make people aware that Downtown Flint is open for business,” she shares. To help make that happen, Kathleen collaborates with other Downtown allies, such as Uptown Development, Uptown Reinvestment Corporation, U of M-Flint, Diplomat Pharmacy, the Mott Foundation, the Hagerman Foundation, and Skypoint Ventures. “They all share the same vision of putting Flint on the map,” she adds.

Kathleen concludes that it has been very interesting to see all of the positive changes Downtown over the last decade. “I’m really excited about the restoration project of the Capitol Theatre,” she says. “I can’t wait to see it, along with all of the other buildings that are being renovated in Downtown Flint.” And she has also notice that more and more people are living Downtown. “I believe it is one of the safest and best places to live,” she says. “Flint is my home. It’s my heart.” 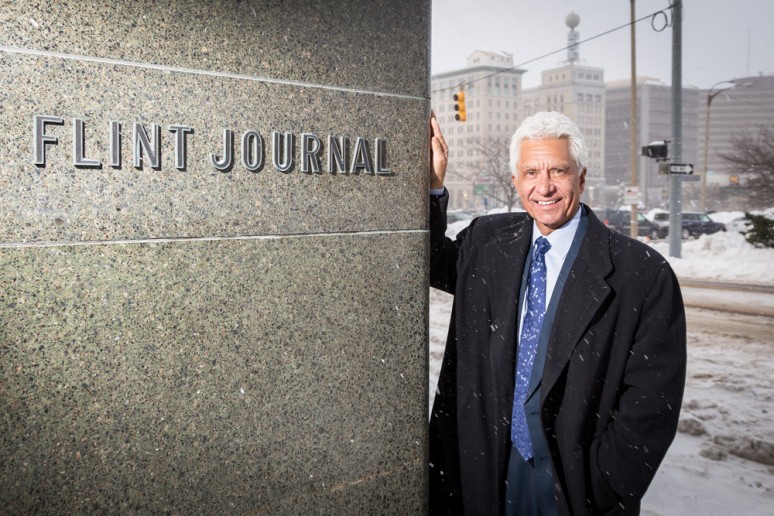 A relative newcomer, Rodney has lived in Flint since August 2016. The Colorado native, who was recently appointed President and Chief Executive Officer of the Flint Institute of Music, had not planned to live Downtown. “I looked at houses all over and was being pushed to look in the suburbs,” he remembers. Because the Cultural Center is located near Downtown, he started looking at some of the Downtown loft apartments. “It was a great decision!” he exclaims.

His loft is located in the old Flint Journal building, now the Michigan State University’s College of Human Medicine Flint Campus, across from the Farmers’ Market. Part of the building is the medical school and the other side houses the apartments. Rodney’s one-bedroom loft with high ceilings and a cement floor is located on the fourth floor of what he describes as “a really cool building.” “I got really lucky,” he laughs. “I have a corner loft with a view of the Farmers’ Market on one side, and I can see the Weather Ball on Saginaw Street on the other side.”

Moving to Flint in August was the perfect time for Rodney to see what Downtown was all about, with the many festivals – the Crim Festival of Races, Back to the Bricks, the Buckham Alley Festival and the Art Walk. “It gave me a real feel for what goes on here,” he says. And, it was quite a change for the new leader at FIM, who previously lived in a five-bedroom home in the Colorado Mountains, with deer and fox running around in his backyard. “It was quite the culture shock, but I like it – new place, new town, new people,” he shares. “It’s a different feel and a different vibe; you don’t get the sense of community living in the suburbs.”

Rodney has always enjoyed cooking, but doesn’t do much of it anymore with all the Downtown restaurants to choose from. He has become a regular at Cork on Saginaw. “Why cook, when I can get a gourmet meal right around the corner?” he says, with a grin. It also gives him an idea of what is going on in the community.

While he may not stay in the loft he currently lives in, he does intend to reside Downtown. “I like the idea of it,” he says. It is especially exciting for him to see how the arts are embraced by the community. “Art is a spark for growth,” he adds.

Rodney considers living Downtown a positive, both personally and professionally. He has lived in many places, but never in the Midwest. “There is such a sense of community here and genuine support of the arts in Flint,” he says. “People really care and I find that to be very refreshing.”

Summing up his decision to move Downtown, he adds, “I’m not sorry. That was my second best decision. The best decision was taking the job at FIM.” 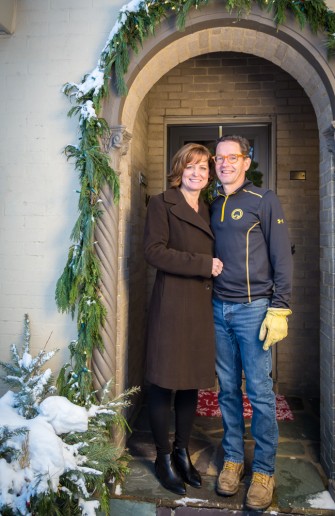 This couple lives in the Mott Community College and Cultural Center area, having moved into a lovely home on Beard Street, across from MCC in August 2015. They previously lived in a large home on ten acres in the country, south of Fenton. Their children are both grown, the home was too big – it was time to downsize. Winston coaches a cross country team at MCC and the team would run in the neighborhoods around the college, and he absolutely loved the homes in that area.

So, when the couple began looking at places to live, they decided to look in the college area and found the Beard Street home to be perfect for them. The prices of homes in that area were very affordable. “The price was right and we fell in love with the place,” Winston says, of their three-bedroom, Spanish-style home. The house was built in 1929 and the original owners designed it to look like the place where they had honeymooned. The home is surrounded by many beautiful trees. “We never had to rake leaves before we moved here,” Winston laughs.

There were a few reasons the couple chose to move to Flint. Their son was living Downtown at the time in an apartment in the Michigan State University building. While living there, he met his wife, who was a MSU student. Winston works Downtown as the Executive Director of Gear Up 2 Lead, which is located in the Dryden Building. The organization started a non-traditional school where the students learn entrepreneurial skills working at some of the start-up businesses in the building. Mary is a physical education and health teacher at Howell High School. “I really don’t mind the commute though,” says Mary, adding that she enjoys having the time to unwind while driving.

Another attraction for them was the close proximity of the Cultural Center to their home. They enjoy cultural events and go to The Whiting at least once a month. They are also avid hockey fans and currently have two Flint Firebirds players staying in their home. “We really enjoy that,” Mary says. “We rarely miss a game.” They also love attending the many Downtown events and festivals. “We love going to the Farmers’ Market!” Mary exclaims. The couple also enjoys spending an evening at the Soggy Bottom Bar. “It’s our favorite,” Winston says.

The Stoodys feel very safe in their neighborhood. “I feel safer here than I did living way out in the country,” Mary admits. There are many other pluses of living where they do. “We’re near the expressway and can get anywhere quickly,” Winston says. “We are close to a thriving Downtown and you can really feel the energy. It’s vibrant.” They also appreciate the diversity of the area.

What Mary enjoys most is the camaraderie of their neighbors. “We talk to each other and help each other,” she says. “Some people have been here their whole lives and some are new families.” She especially enjoys Halloween, when about 300 youngsters descend upon the neighborhood for trick-or-treating. Most of all, the couple has no regrets about their decision to live in Flint. They agree, “It was the right move for us.”