The other day, I saw a Facebook post about pit bulls that said, “Warning: Do not leave your child unattended with a pit bull.” The post included a photo of one with a child’s drawings all over it!

Now, I love dogs, but I was never a fan of the pit bull breed. When my son lived in Flint, I saw a horrible fight between two pit bulls at his neighbor’s house and it scared the daylights out of me. Also, they just LOOK scary to me. But that was before I met Lilly, my daughter’s pit bull and family pet.

Lilly (or Lillian as she is called when she misbehaves) is a beautiful, white dog with brown spots, and is solid muscle. A few years ago, my daughter, Melissa, was sitting on the porch at her Bay City home when the dog showed up. Melissa lived on a very busy street at the time, so she brought the dog into her house. She immediately fell in love with her, which I really couldn’t understand. Melissa posted on her Facebook page asking if someone had lost a pit bull and called the animal shelter to see if anyone was looking for one. It turned out that the dog was owned by a woman down the street. 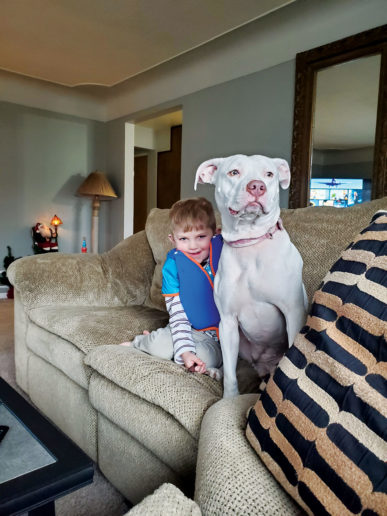 The woman had two other dogs and told Melissa that Lilly kept running away. Melissa offered to keep her and the woman agreed. That was clearly a “red flag” to me, but it wasn’t to my daughter. My grandkids were ecstatic to have a new pet. They already had two cats but really wanted a dog. “It was meant to be, Mom,” Melissa told me. “She chose us.”

I was a little apprehensive and worried how the dog would behave around my youngest grandson. So, I did a little research about pit bulls and according to the ASPCA (American Society for Prevention of Cruelty to Animals), “A well-socialized and well-trained pit bull is one of the most delightful, intelligent, and gentle dogs imaginable.” Well, I didn’t believe it – until I got to know Lilly a little better.

First of all, Lilly IS a very, very bad dog. You can’t leave any food out on the table, on the stove or in the trash – she will eat it. And if you open the door, she will run away. She has been known to eat a sofa cushion when left alone, destroys window blinds and jumps through screens. She jumps up on the couch when she thinks no one is watching (or even if they are), it doesn’t really matter. Lilly is also deathly afraid of the cats in the house – they hiss at her and she will walk as far around them as she possibly can.

But she is also the sweetest dog I have ever met. Lilly loves my grandkids and they love her. Even the little one runs around and plays with her and lays on top of her. And Lilly is as gentle as can be with him. When I go to visit, she jumps up on the couch and lays her head in my lap.

Although my daughter gets frustrated when Lilly is bad and threatens to take her away, the four-legged bad girl is there to stay. She is a member of the family now, and is very much loved. I guess pit bulls aren’t so bad, after all.