Naturally, that enthrallment led to emulation.

For Doyle, it took the form of producint wrestling “shows” with friends in his backyard, complete with steel cage matches. “Our dog kennel worked well for that,” he recalls. With a little help from his Goodrich High School friends, Byrd organized bigger productions. “It started as a bunch of friends messing around and soon there were about 15 of us holding matches nearly every weekend,” he says. “Then, we started filming our shows.”

With that, Byrd’s passion for all things wrestling was ignited, and the 16-year-old began pondering how he could turn what he and his buddies were doing into something bigger. Enterprising even then, Byrd secured a venue (friend’s pole barn), found a way to rent a ring without adult assistance and finalized the matchups. Promotion? Byrd covered that, too, hyping the events at school. He did, however, encounter some detractors. “I was suspended for advertising the show during school hours, but we all loved how well our wrestling event, held in the middle of Goodrich, turned out,” recalls Byrd, whose athletic background also includes varsity football and baseball. 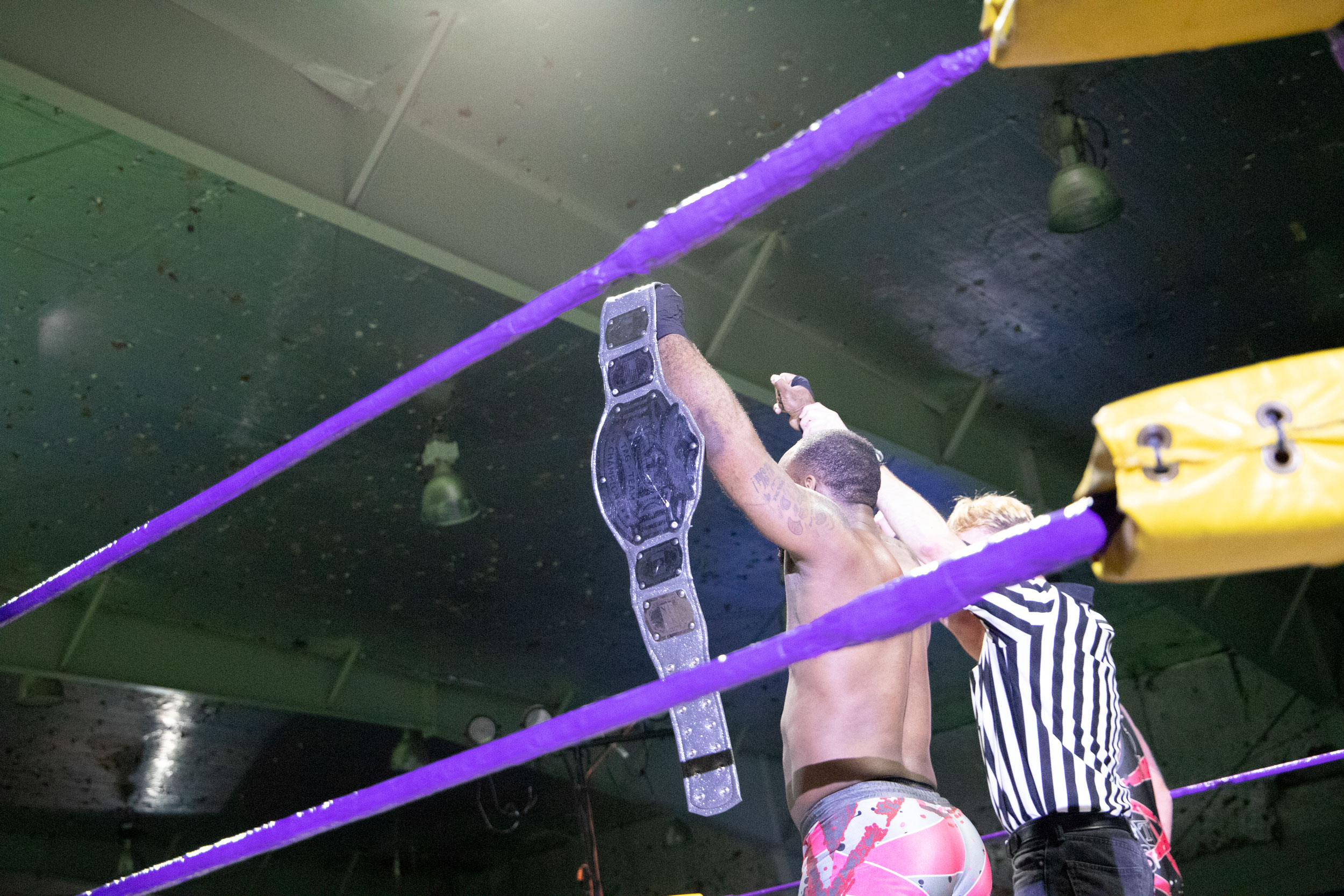 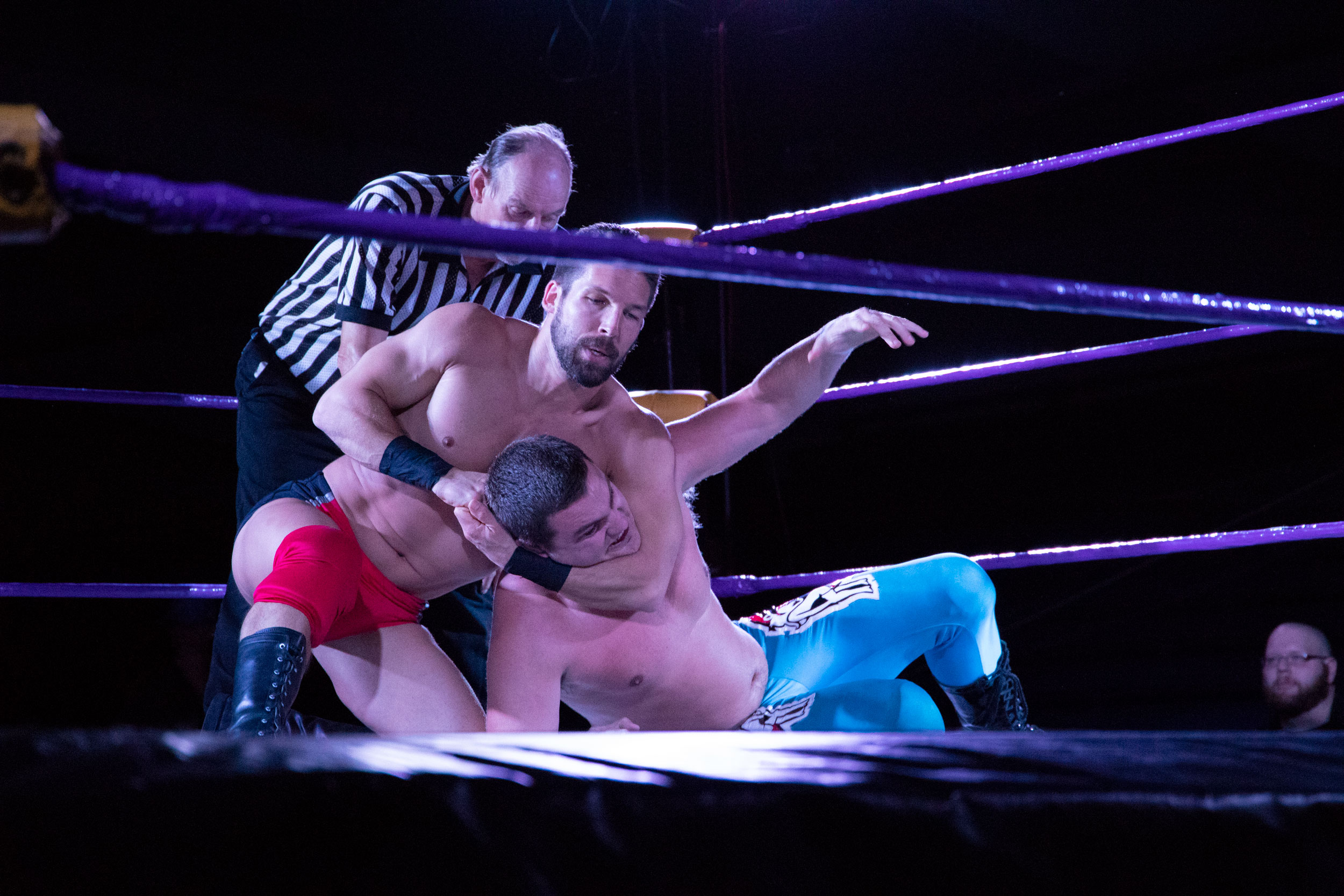 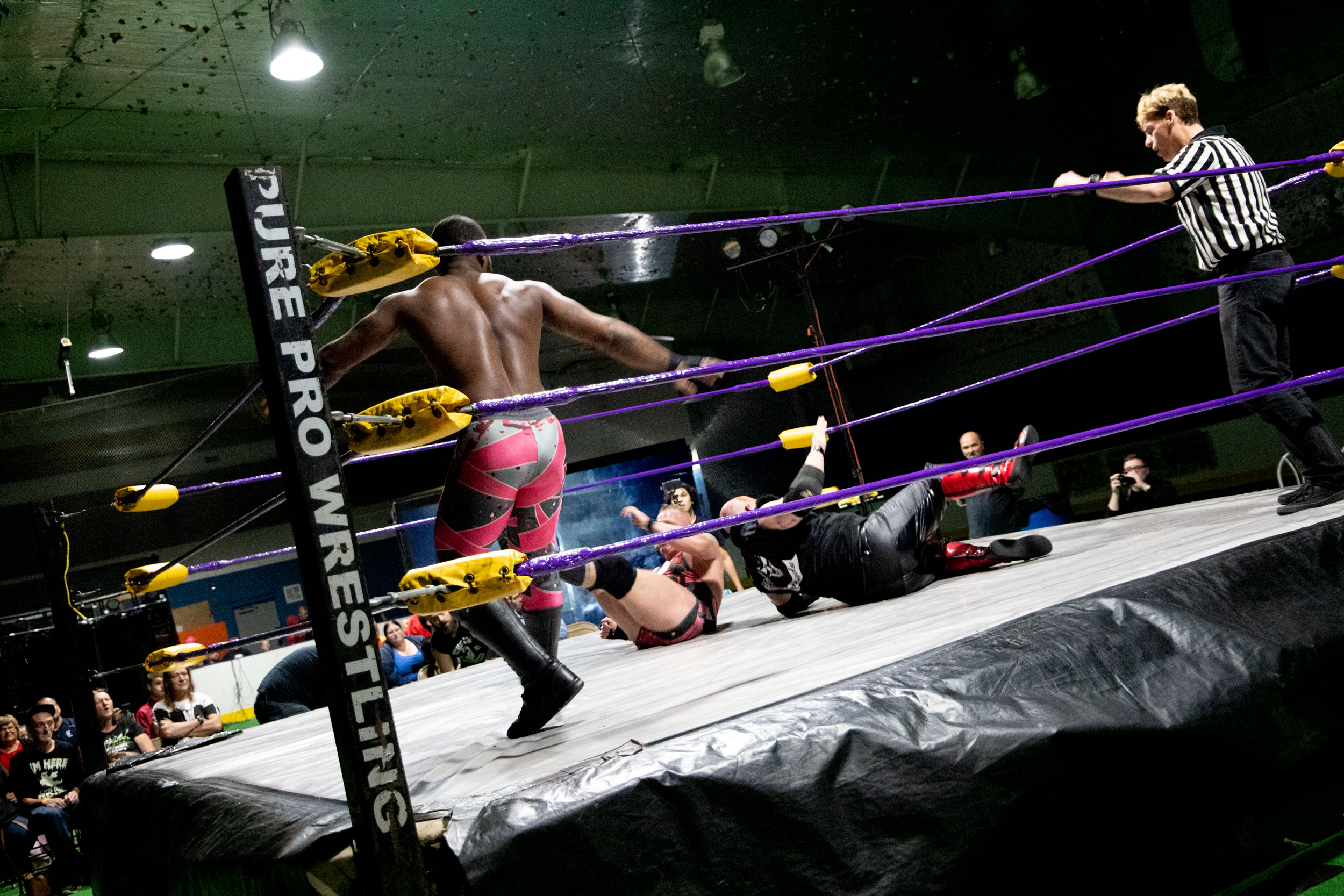 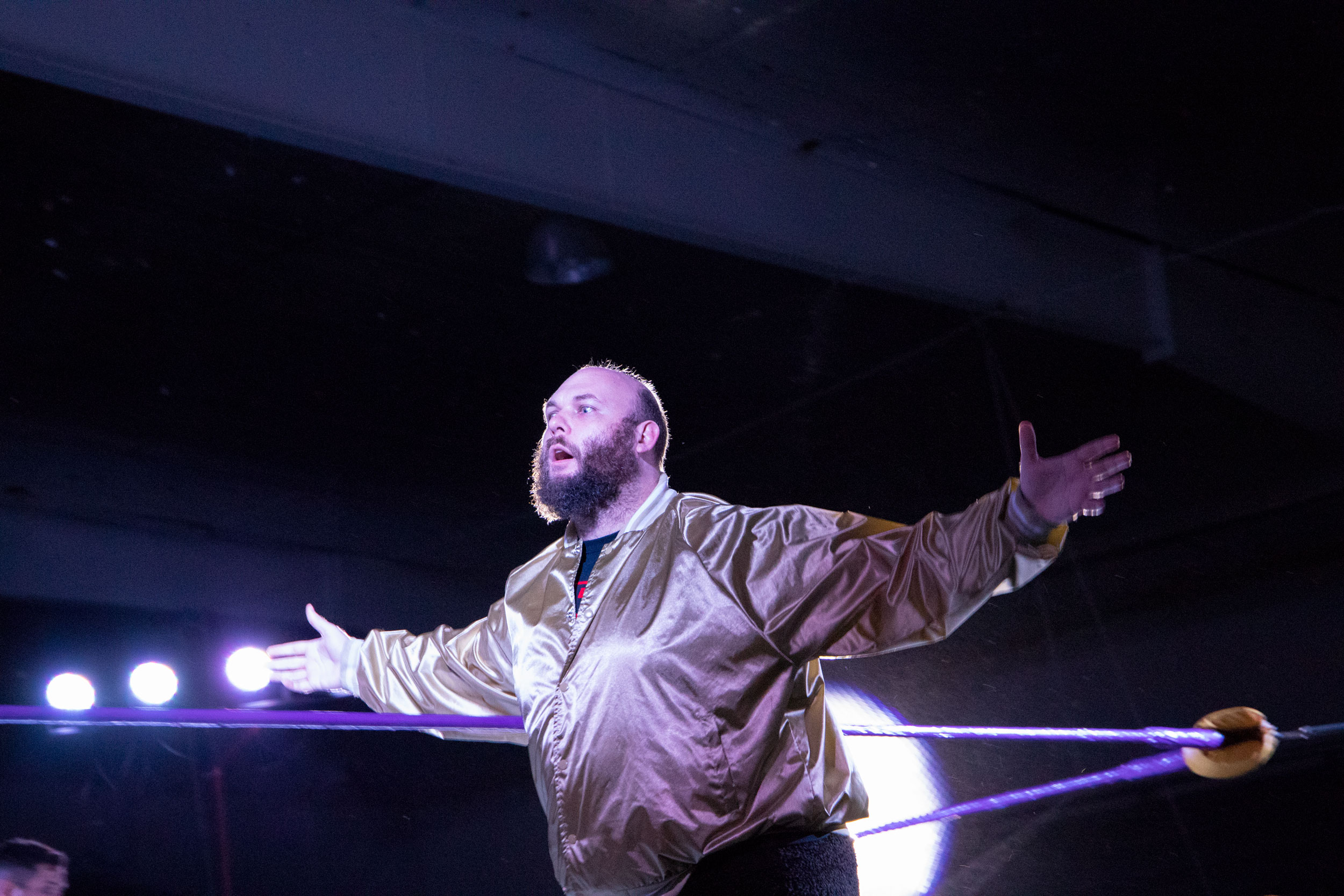 Byrd could hardly have envisioned what his passion would lead to. Nearly two decades later, he oversees Michigan’s largest independent professional wrestling organization.

While he readily acknowledges that running PPW on his own would be impossible, Byrd has the final say on all aspects of the organization, now based at Flint Iceland Arenas. He determines the matchups and storylines, is the head trainer, brainstorms promotional activities, secures venues and sets the schedule. In July, PPW opened what is believed to be the state’s first youth professional wrestling training program. Byrd, who sports a bushy beard and hair that has grown well past his shoulders, also performs in the ring as Xavier Justice – the persona he adopted for his first professional match at age 20 in 2004. “I’m really proud of what we’ve built and sometimes, it’s still hard to believe I found a way to realize my dream of working full-time in wrestling where I grew up,” he says. “Our events offer something for everyone. We have the elements of shows seen on television, but it’s done in a family-friendly way. I’ve found that even non-wrestling fans usually get much more out of attending a show than they realize.” 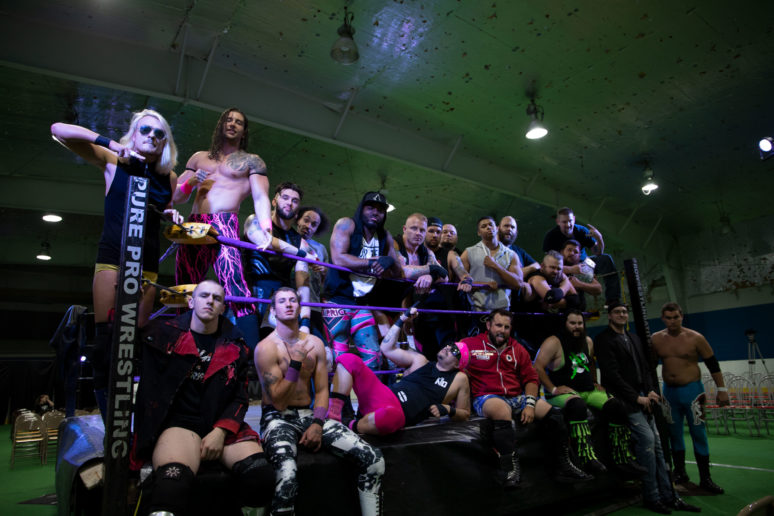 Gideon Malice, PPW’s Michigan State Heavyweight Champion, has been a part of the organization for a decade. At 6-4, 240 pounds, the Davison native (real name Chris Leep) cuts a formidable figure. He stares out from photos with piercing eyes, sometimes draping the title belt over his shoulder. At the same time, Leep, like Byrd, Doyle and others in the PPW stable, is a man of strong faith. Bible verses are all over his social media accounts. Leep probably sums up best what a PPW show is all about. “First and foremost, PPW is a family-friendly company and there is no vulgar language, obscenities or offensive behavior,” he says. “People of all ages can enjoy it. Secondly, the talent and product are top notch, from start to finish of every show, and we show a huge array of skill, style and technique.”

Byrd has a name for what can happen to families who attend PPW shows. “I call it ‘The Disney Effect’,” he explains. “Sometimes, parents take their kids someplace like Disney World thinking they are not going to enjoy it, themselves, but end up loving it. The same thing happens with our shows.”

Another reason PPW is so fan-oriented, Byrd revealed, is that fan reaction dictates the flow of matches, as well as future matchups. “Wrestling fans have no problem telling you what they like and don’t like, which is great from a business standpoint,” he says. “We’ll send somebody out there to be a heel (bad guy) and another to be the hero, and see how much fans buy into it or not. That helps determine the wrestler’s role in the future.”

“First and foremost, PPW is a family-friendly company and
there is no vulgar language, obscenities or offensive
behavior, People of all ages can enjoy it.”
Chris Leep (“Gideon Malice”)

That’s one aspect which drew Doyle, a Flint Kearsley High grad with a strong martial arts background, to PPW about nine months ago. As childhood wrestling friend, Taylor Kettler, is also performing in the organization as Tay Rizer. “With matches, we try to tell a story that fans can relate to, which gives them a reason to start booing or cheering one wrestler or the other,” he says. “They develop an attachment to a favorite wrestler and come away feeling like they were part of something.”

PPW has also endeared itself to Michigan communities through its charitable work. Nearly every event is tied to fundraising for a worthy cause. The organization has conducted an anti-bullying program with area schools. Wrestlers discuss the subject with students during school hours followed by a PPW show at the same school later that day. Last month, Byrd expanded PPW’s charitable reach with a pair of shows in Fayetteville, North Carolina, to benefit victims of Hurricane Florence. “We really started to take off when we became more charity-minded,” Byrd says. “We’re open-minded about what charities we work with, because that’s good for the community and good for us in promoting our brand of wrestling.” 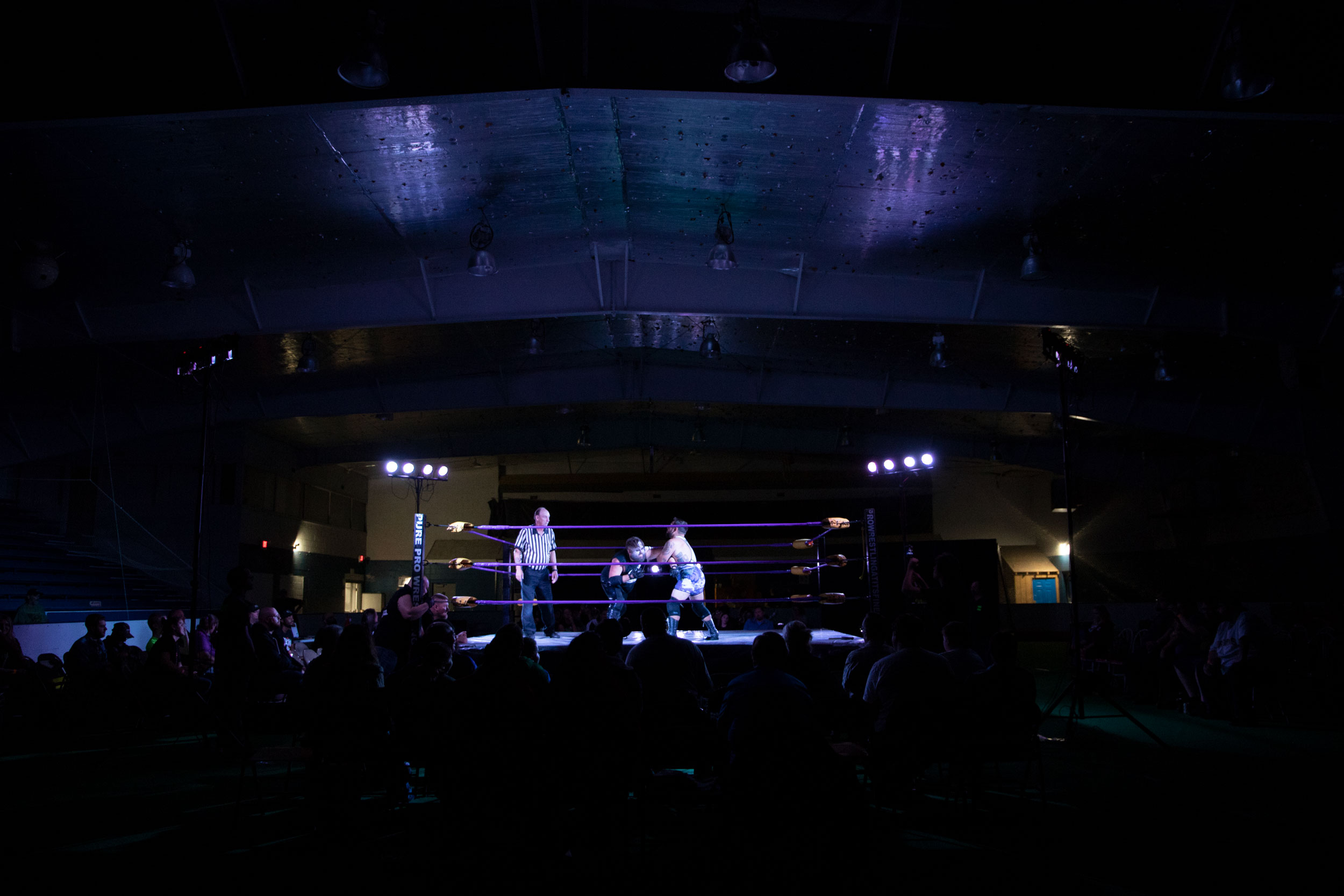 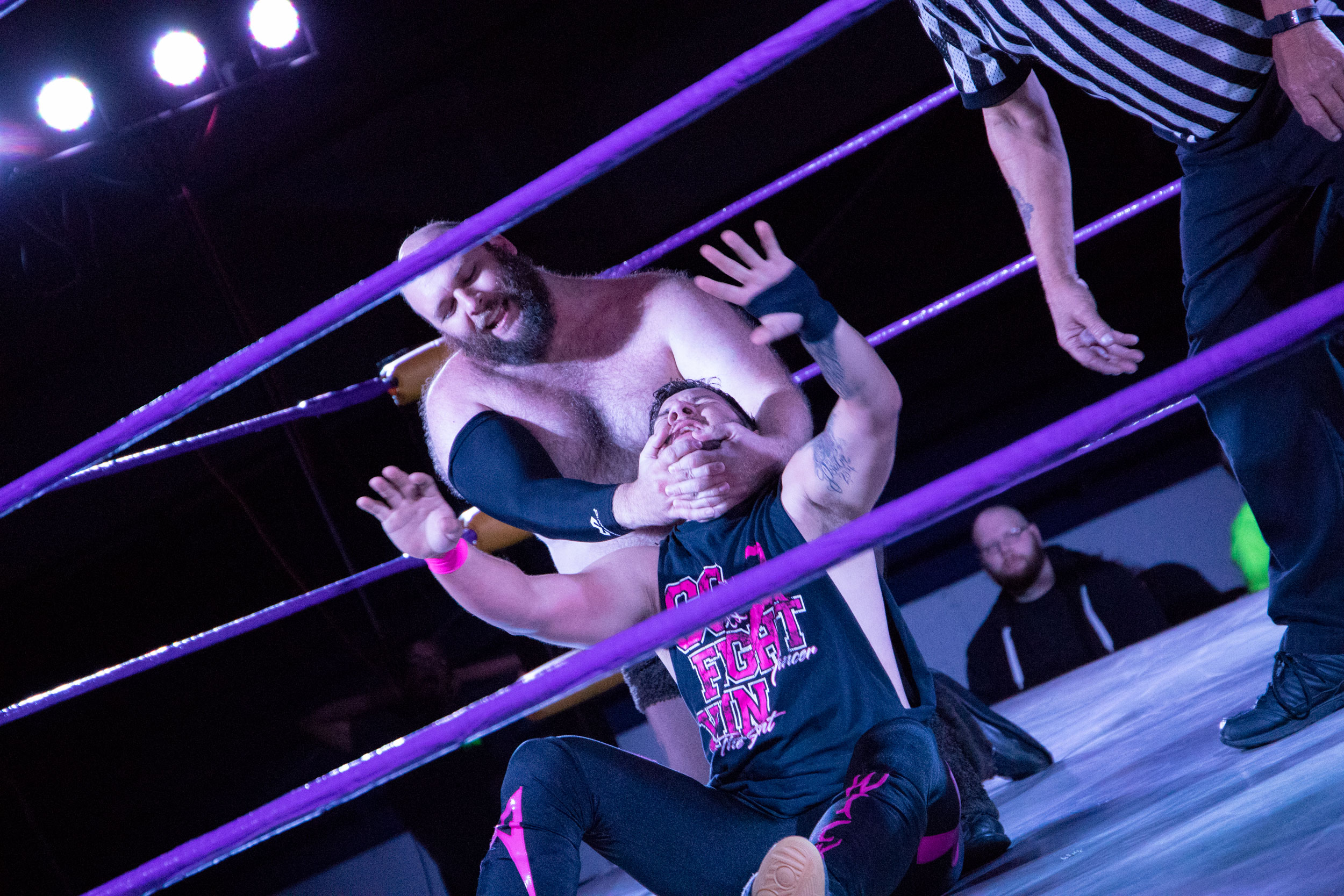 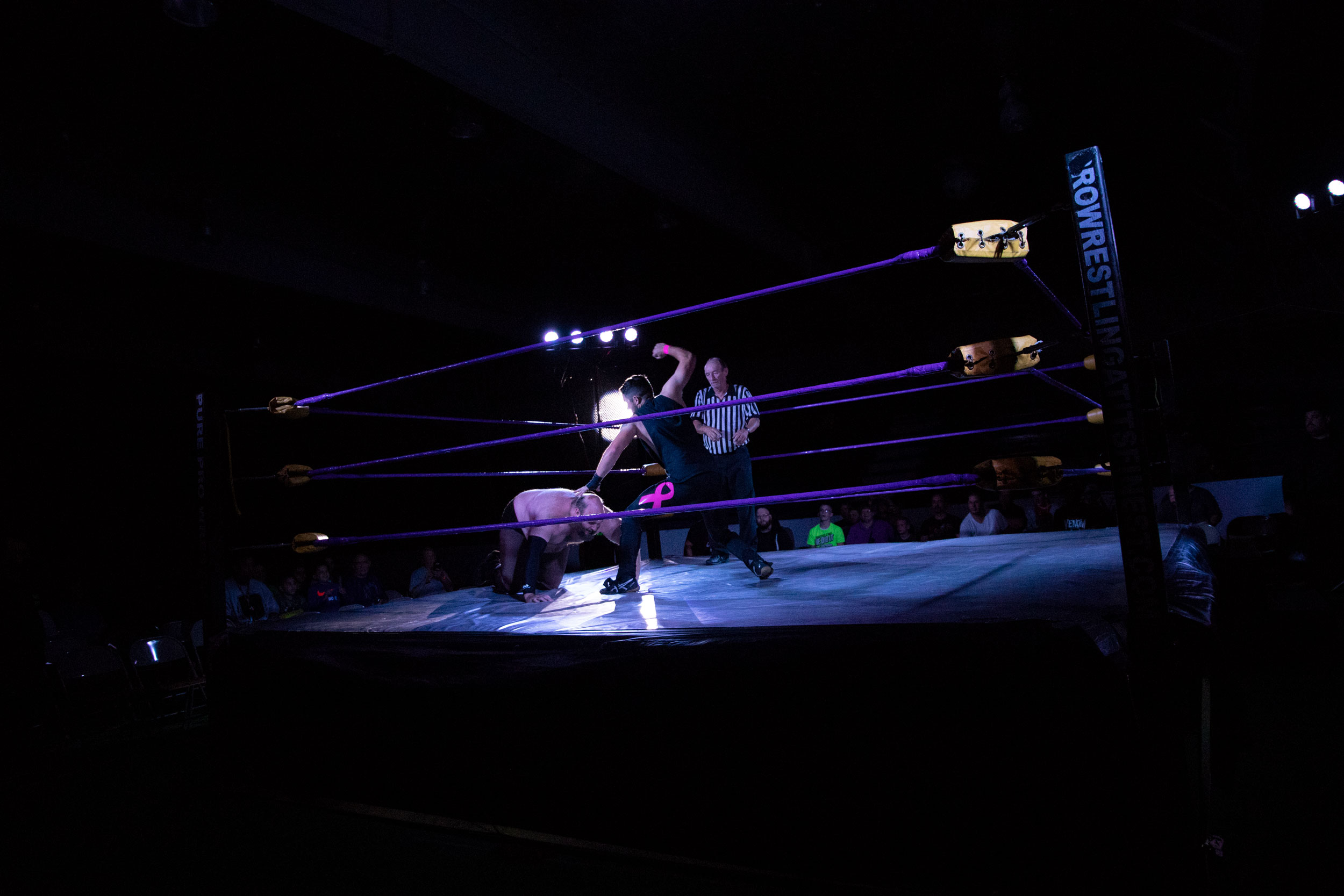 Leep did not begin professional wrestling until he was in his 30s after attending a show with his family at Gibraltar Trade Center in Mount Clemens. “We didn’t even know wrestling was scheduled there until we saw a poster,” he says. “The kids noticed their favorite tag team (Too Cool) was going to be a part of it, so we stayed. I talked to the promoter afterward, who put me in touch with (famed wrestler and trainer) Truth Martini (Martin Krcic). That was it.” Leep laid a foundation for his wrestling career through decades of martial arts competition and holds third degree black belts in Soo Bahk Do, Taekwondo and Moo Kwan Soo Do. He was unleashed in the ring after training at Krcic’s House of Truth in Center Line. Krcic also helped book Leep’s first PPW gig in 2008.

While Leep is a late-bloomer, he has nothing on Father Time (Flint resident Leo Napier). He first joined PPW nearly a decade ago – just shy of his 60th birthday. Napier, a Baptist minister, is an inspirational fan favorite because he continues to wrestle despite being legally blind and surviving three strokes and a bout with cancer. Napier is battling the disease again after being diagnosed with prostate cancer last spring. The cancer was detected early, however, and he underwent successful surgery in September. “He came through it in good shape and doctors were hoping that they removed all the cancer,” Byrd says. “Father Time has made such an impact on so many lives, including my own. He married my wife and me, and inspired me to live a Christian life. When he first came to me, I was a little apprehensive due to his health issues, but he’s been amazing.” A benefit wrestling show to help offset the cost of Napier’s treatment was held in May, an event Doyle found emotionally moving. “I cried a little during that show, because something is wrong if seeing Father Time battle the demons he has and still be able to wrestle at a high level does not move you,” he says. “When I started training, he was the first one who pulled me aside and told me I have something special. I was like, ‘wow, I can really do this’.” 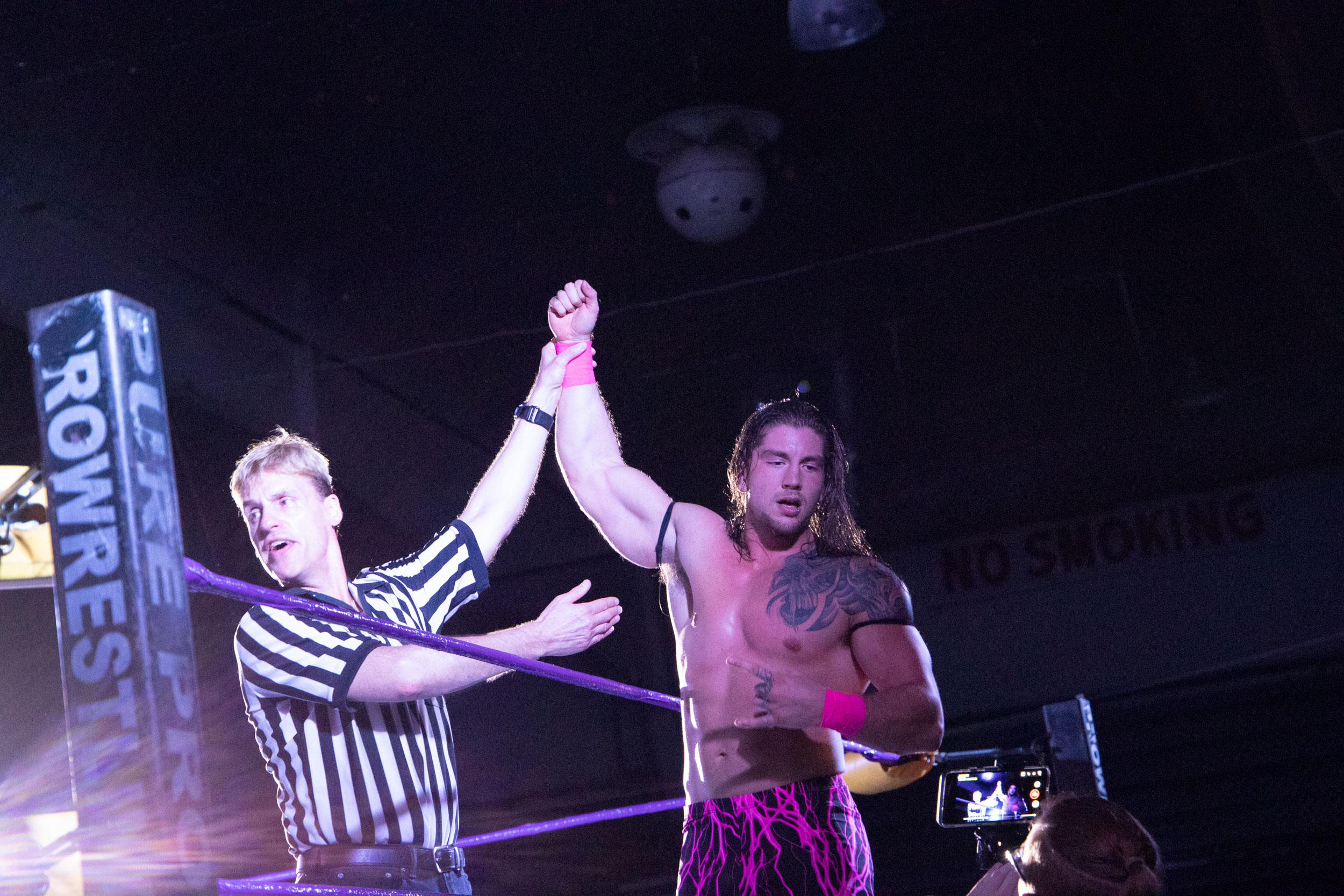 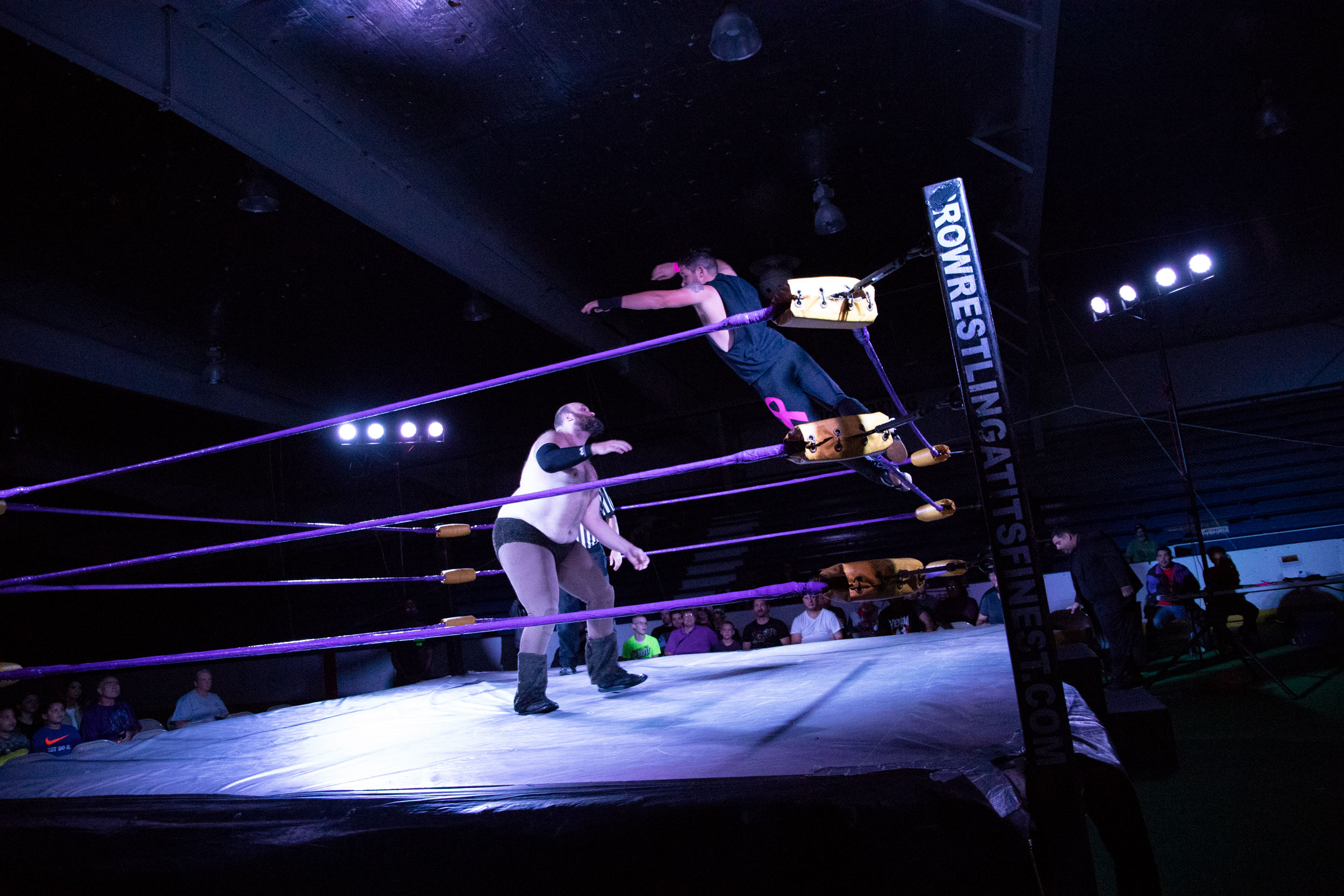 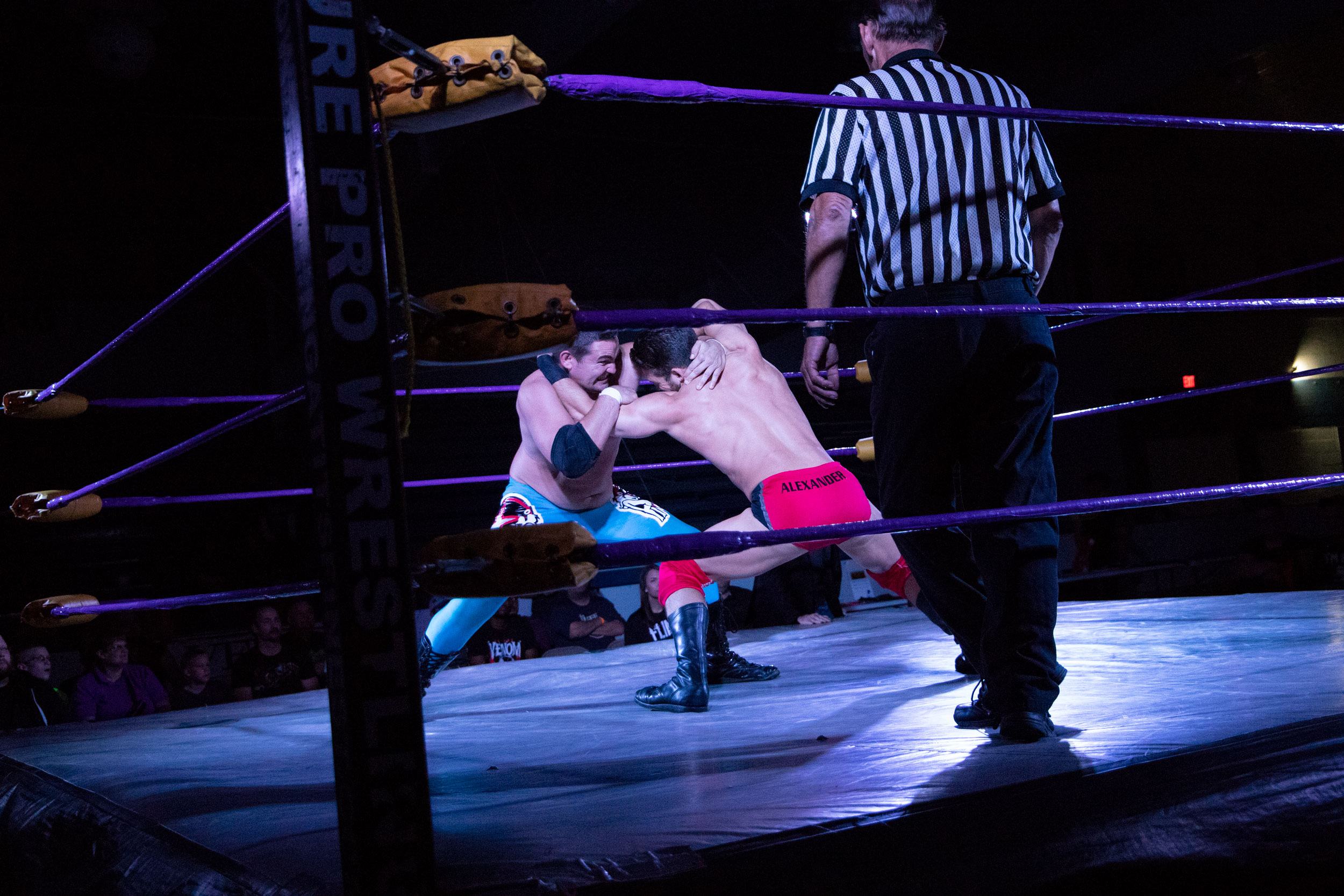 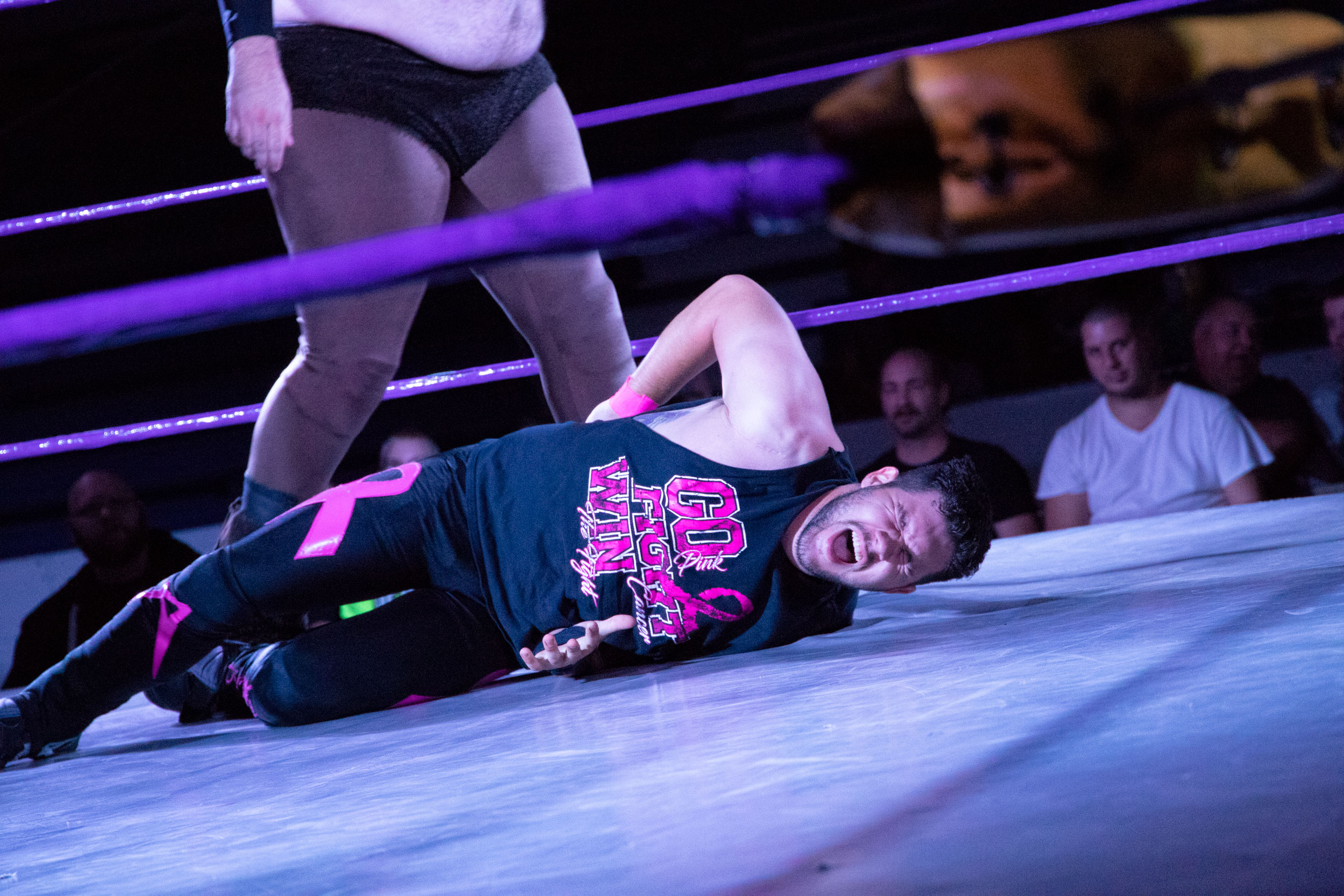 In addition to its youth training program, PPW offers adult wrestling training from 6-9 pm, Monday-Friday. “You never know what can happen by attending a class,” Byrd stresses. “One of our wrestlers, Mr. One Night Only, originally just wanted us to show him some moves for something he was doing for his son’s birthday party, but he soon found he had something more to offer.”

Byrd plans to offer more in 2019 with monthly shows, each featuring a different theme, at Iceland Arenas. A famous wrestling personality will appear at each show, as well. Byrd has already secured commitments from Joey Ryan, who has won title belts in several organizations, and Impact star, Abyss.

Season tickets to the shows will be offered.

“One month, we might have an all-super heavyweight card, another month an all-female lineup, another time a cruiserweight tournament,” Byrd says. “Other wrestling organizations have run into trouble by offering fans the same thing all the time.” The next PPW event at Iceland Arenas is November 10 and features Gowen, who in 2003 became the first amputee to compete in the WWE after losing a leg to cancer at age eight. He has faced some of the sport’s biggest names, including John Cena, The Big Show and Brock Lesnar.

For more info, check out pureprowrestling.net.