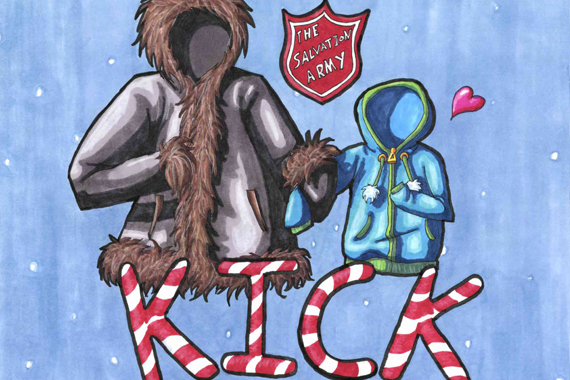 Many of us know about the Salvation Army’s annual coat drive, Coats for Kids, which seeks new and gently used warm outerwear for children in Genesee County whose parents have not the resources to keep them properly bundled up during the winter. But it may come as a surprise to learn that the children of the Flint Community Schools have taken it upon themselves to make a difference for their cold classmates. Kids Involved in Coats for Kids is a homegrown, local effort that has been growing in size and impact since it began in 2008.

Here’s how it works: students in the Flint Community Schools compete to raise money for the KICK program through creative fundraisers. Children are also encouraged to make a poster that advertises KICK’s mission. Fundraising lasts until October 31 this year, and on November 8, the community is invited to an open house at the Salvation Army’s headquarters on Kearsley Street to vote on the posters they liked best. The top 10 posters earn their creator’s the opportunity to take the money raised through the fundraiser on a shopping spree at Burlington Coat Factory on November 16, where they will select winter jackets for classmates who need them. As a special thank you, each of the winners will be able to pick a new coat for themselves, as well. “KICK has seen tremendous growth in the past four years,” says Connie Peters, Development Director for the Genesee County Salvation Army, “from 30 poster submissions in the first year to over 300 in 2012.” Connie also says that the Salvation Army is thankful for the help of Burlington Coat Factory, who works with them to get the coats that children will want for up to three times less than their market value.

“This program is so special,” says Connie, “because the children are stepping up to protect their classmates from the Michigan winters. We hope to continue growing KICK so we can provide another 2000 coats to kids in need this year.”

Look out for coverage of the KICK shopping spree in our December issue!