Begun in the Motown basement of Mr. Perry Dorrance in 1935, the Detroit Model Railroad Club is the eighth-oldest club in the United States, and will celebrate its 80th anniversary in the coming year. The Detroit Union Railroad model fills nearly the entire space of the building. Only the balcony in the back is left open for the dispatch center and the club’s extensive model railroading library. The club’s building plays a very important role in the railroad’s set-up. “This building was a movie theater, so the floor slopes downward. When we purchased it, we were going to build up the floor to make it level, but a few of our more forward-thinking members saw how we could make the grade work to our advantage.” Instead of building up the floor, the members built the track horizontally so that the sloping floor underneath it allows members to navigate through the railroad’s extensive infrastructure with relative ease, “although it gets more difficult the more we age,” Dave laughed. While the club boasts 75 members of all ages, “our median hovers in the retirement age group,” Dave quipped.

Precision is the name of the game at the Detroit Model Railroad Club. Every Tuesday, the club’s members work all day, constructing new track and scenery, operating and maintaining the railroad’s components, and making plans for the future. The members are meticulous in every aspect of their railroad’s creation and operation. A single foot of track is composed of 25 miniature cross ties – made only of basswood lumber because of its fine grain and durability – with four tiny rail spikes per cross-tie to hold down the miniature steel rails. Even if you’re quick with needle-nosed pliers, it still takes three hours to build, Dave said wryly, but the results are phenomenal. Although the railroad is miniature, it’s not delicate. “We can walk on the track if we have to,” Dave said with pride. The railroad has over a mile of track – 6,000 feet to be precise – built in O scale, wherein ¼ inch is equivalent to one foot. In scale, that’s 54 miles. (It’s also 18,000 hours of manual labor invested into just the laying of the track, but who’s counting?)

The same amount of attention is given to the railroad’s design, wiring, scenery and operation. “Members tend to work on what interests them the most,” Dave said, “A lot of what we do here is just for ourselves, because we love it, especially the track’s design. We like to make it challenging to operate.” In this spirit, the model railroad consists of both standard and narrow gage track, a reflection of historical tracks in American railroad history. “The narrow gage tracks had their day in the sun because they traversed the steep gradients of the American Rocky Mountains better than standard gage and were less expensive to build,” Dave explained. Speaking of steep gradient, the model railroad contains seven and a half feet of elevation change, which is 360 feet in scale. “In the model railroad world, we have a pretty impressive track,” Dave said with a chuckle. The club’s newest project is the construction of a model Detroit Union Station, which will include a staggering 14 lines of track and room to make even longer trains.

DMRC President, Dave Thornton says he’s always loved trains. “The first words I ever said were about trains!” he laughed. 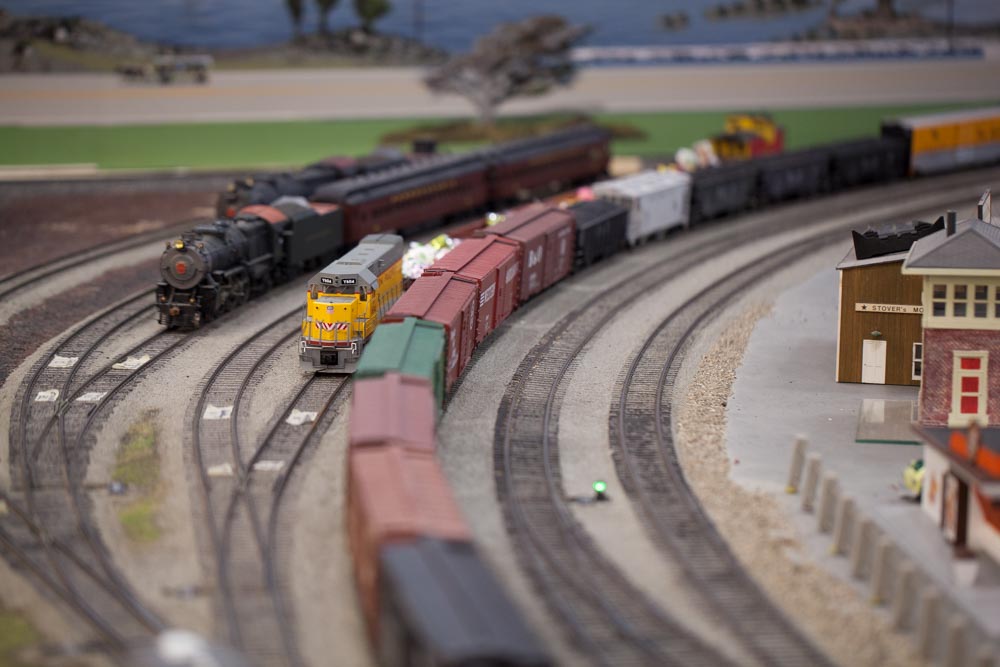 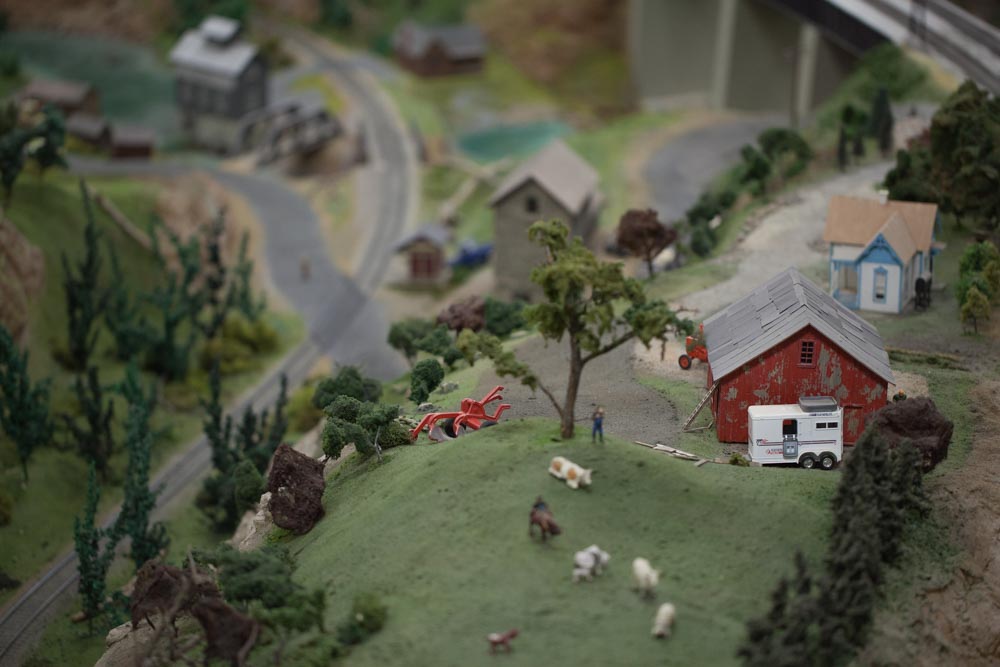 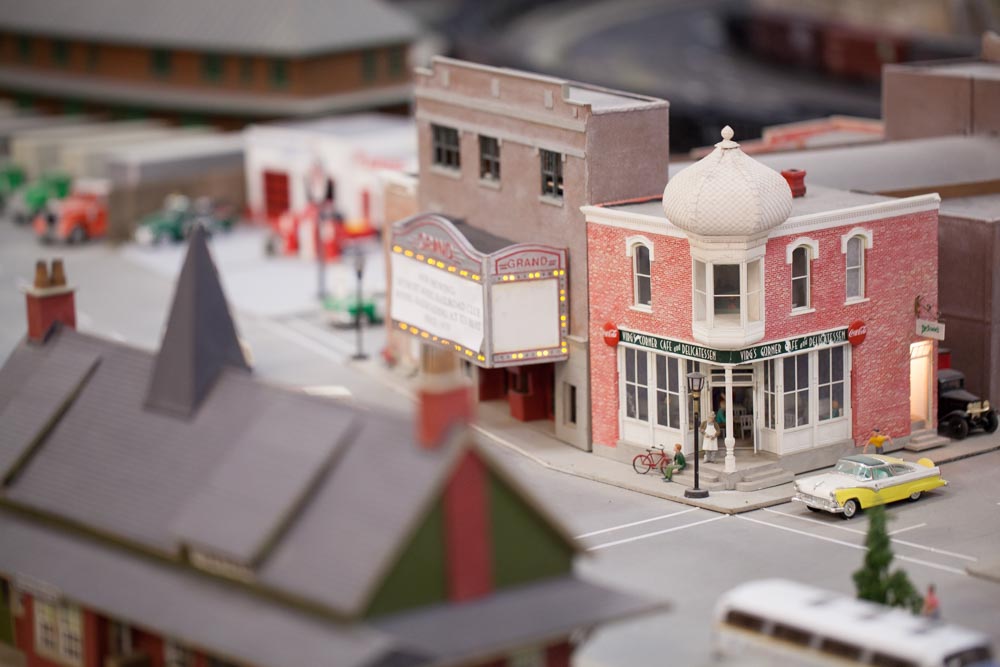 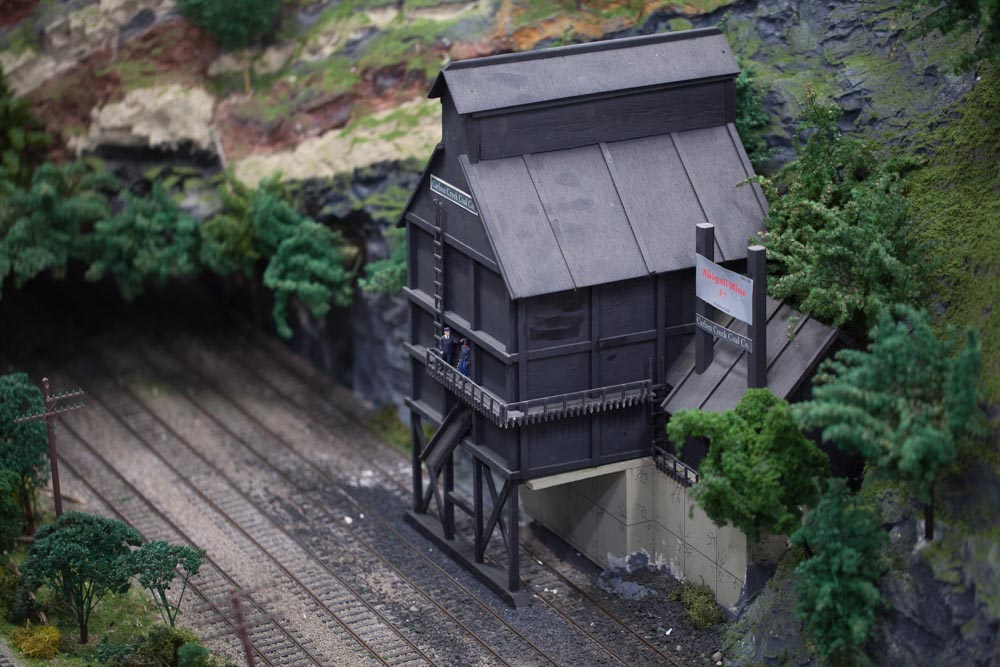 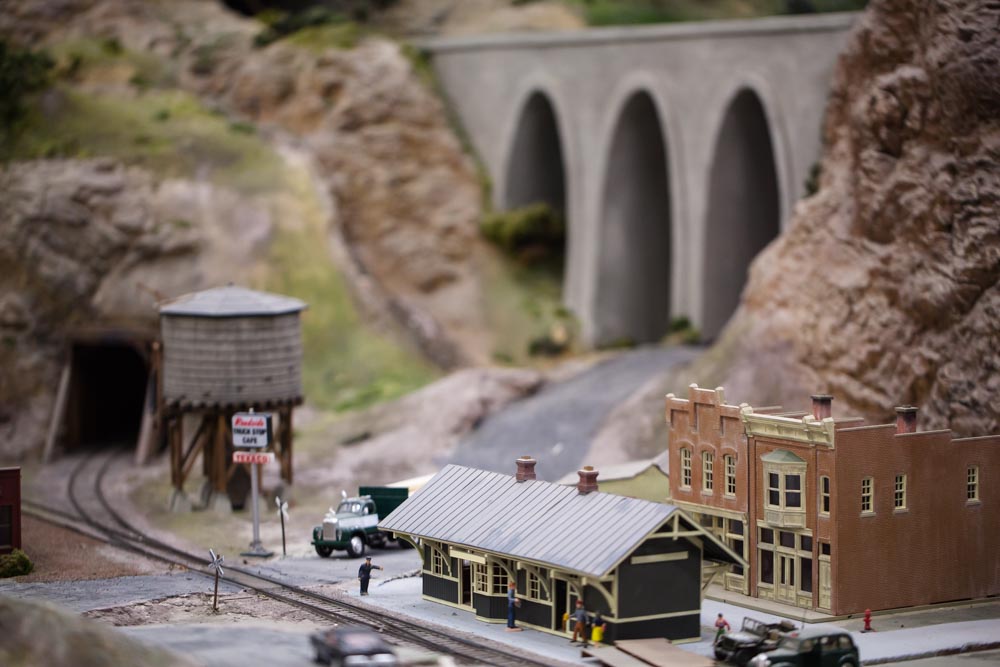 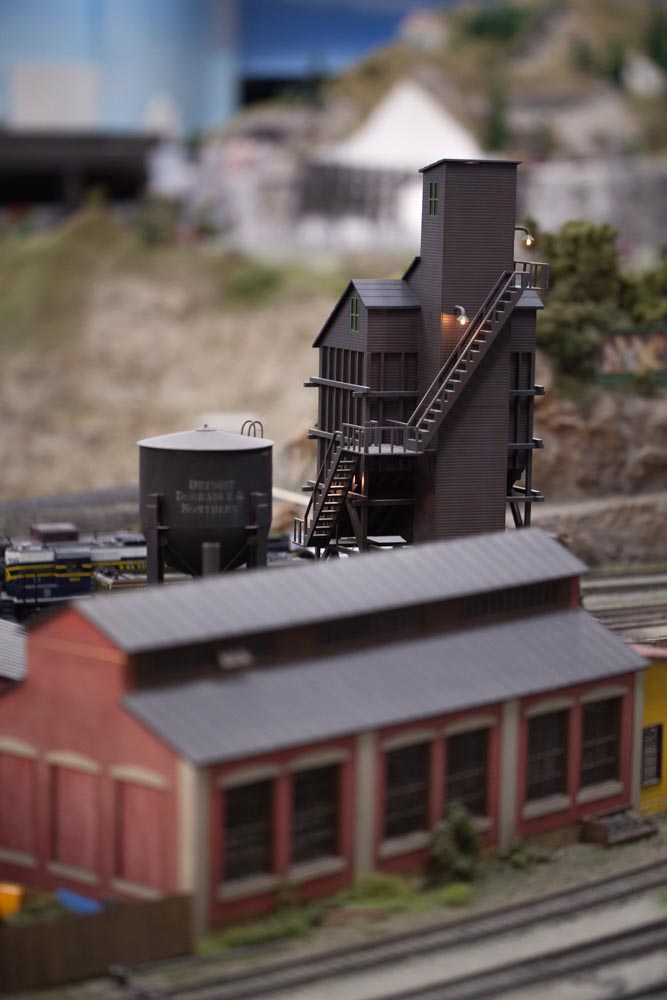 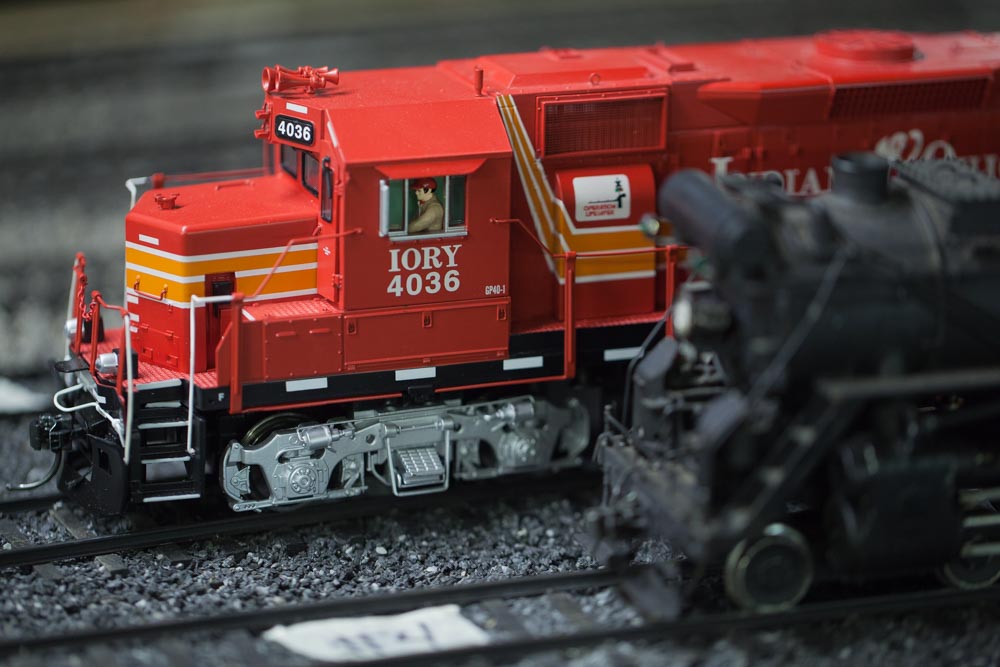 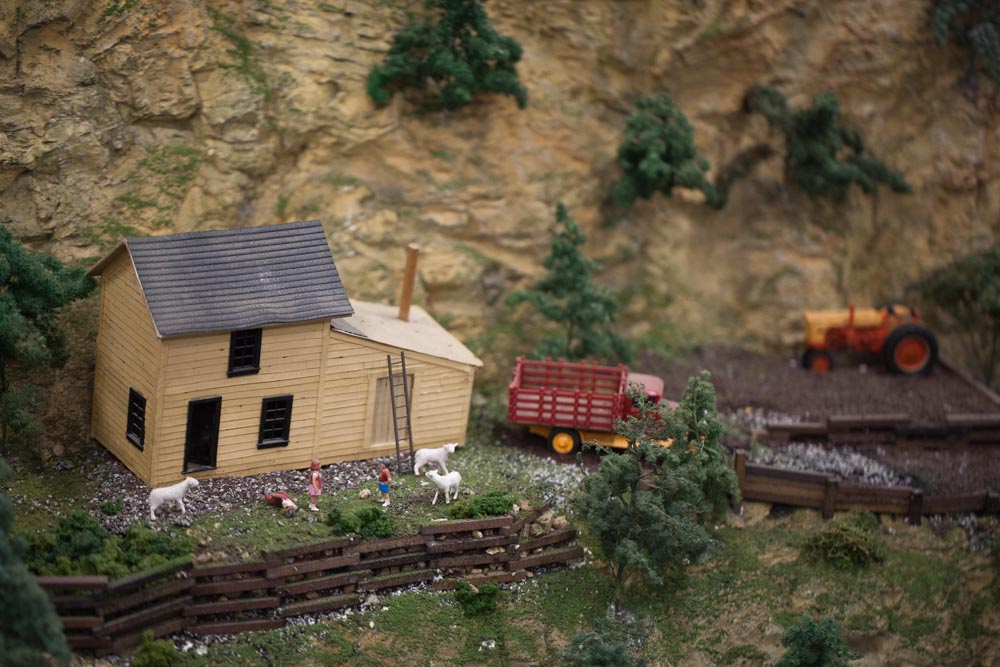 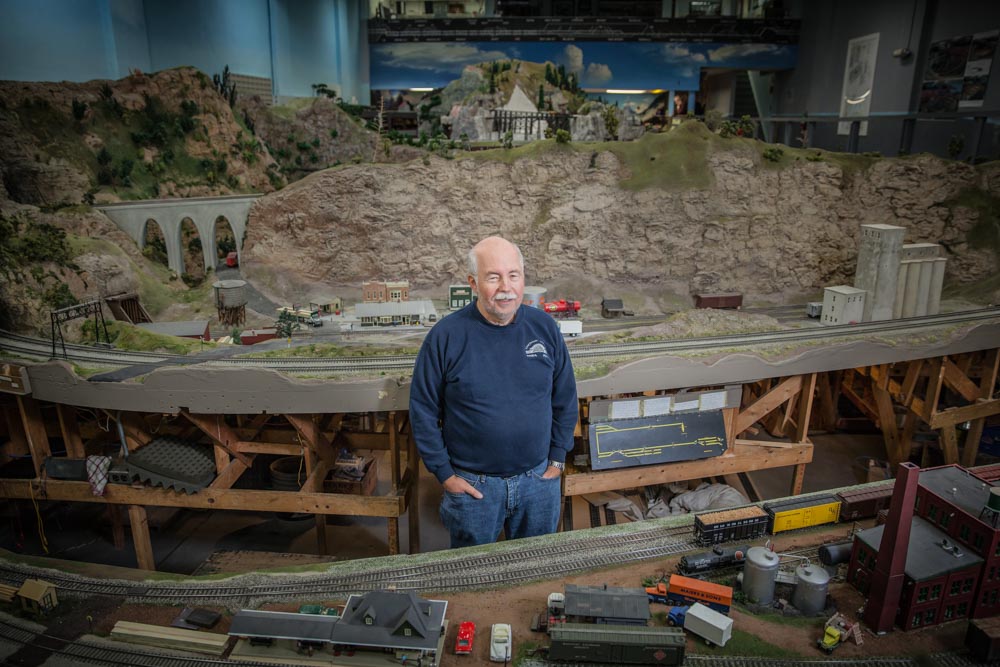 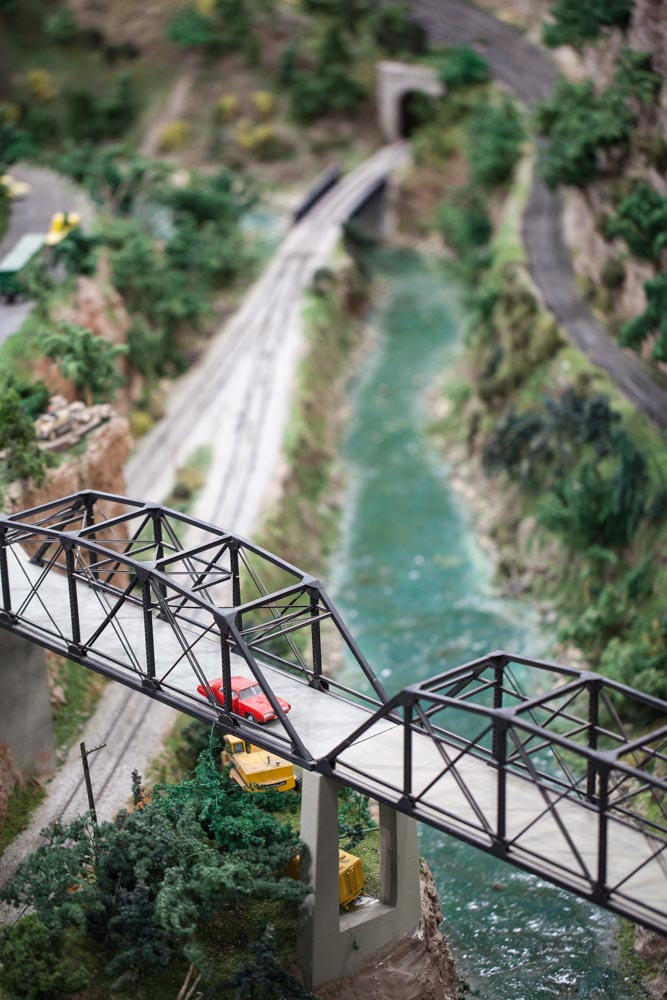 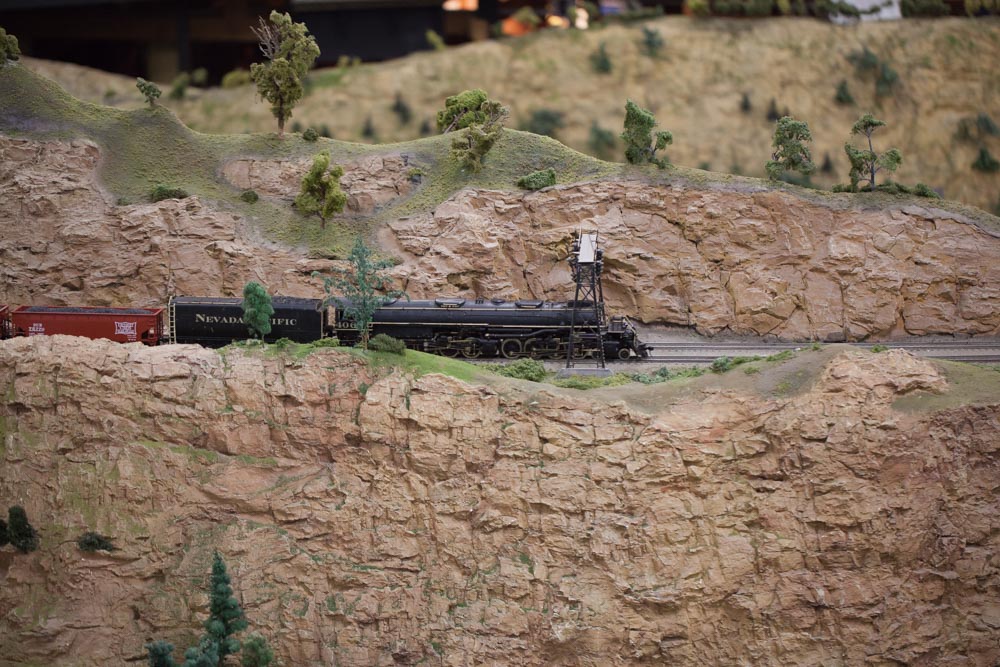 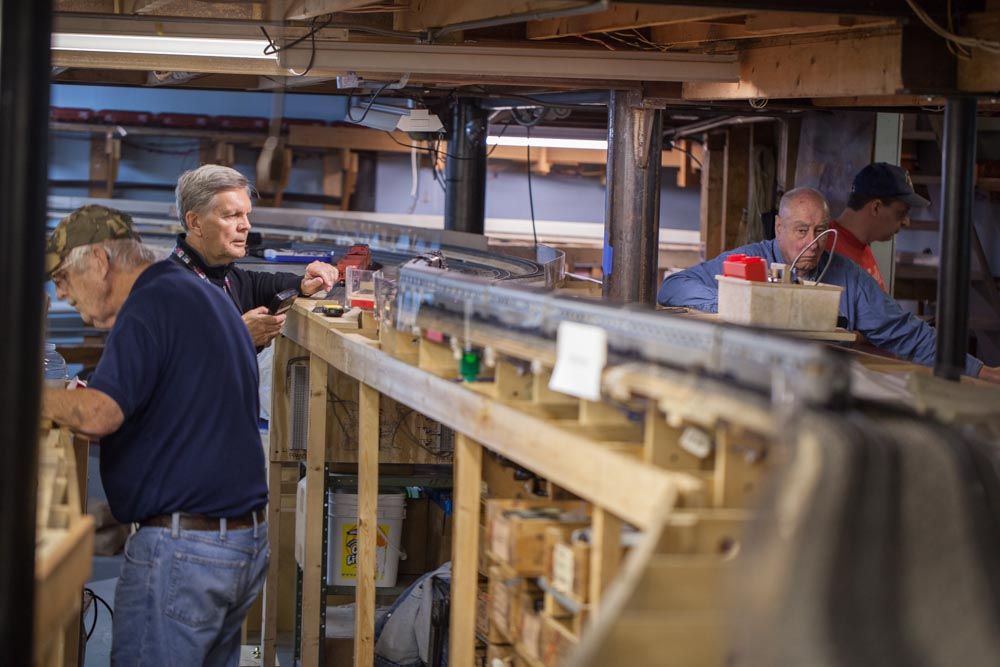 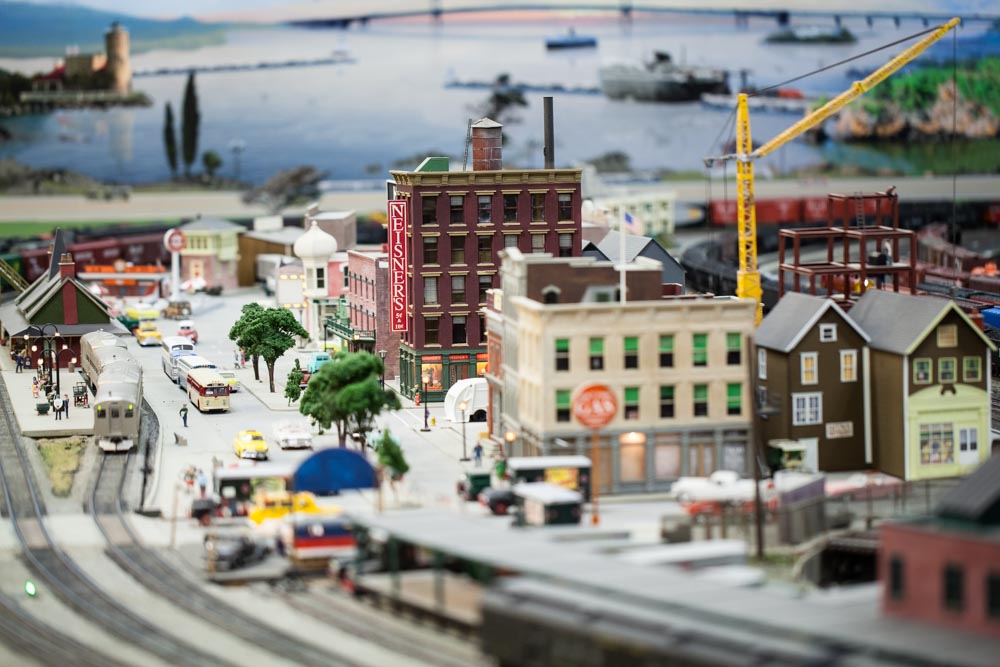 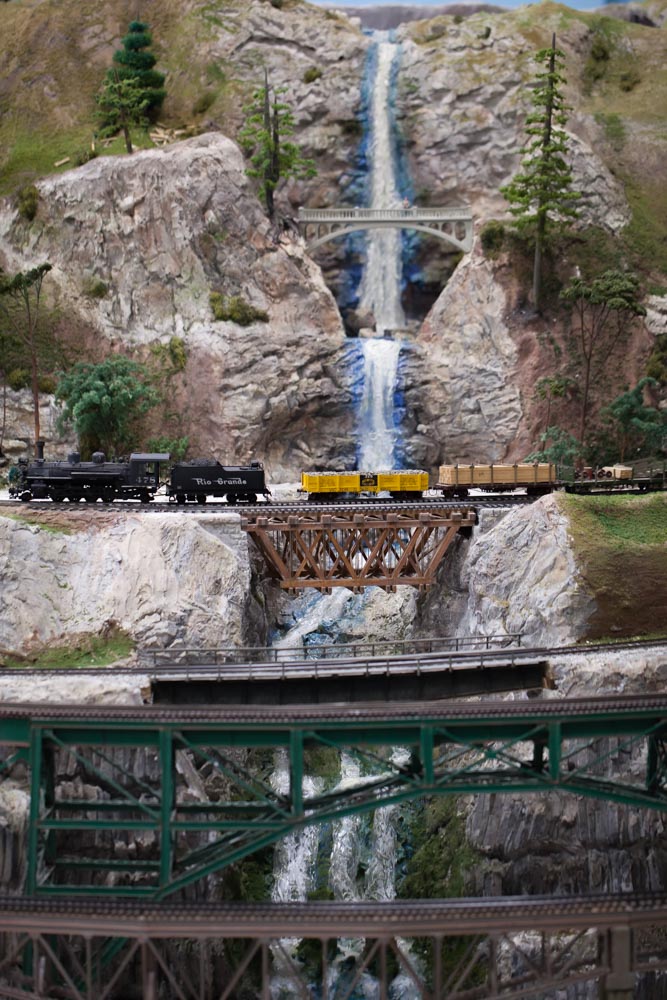 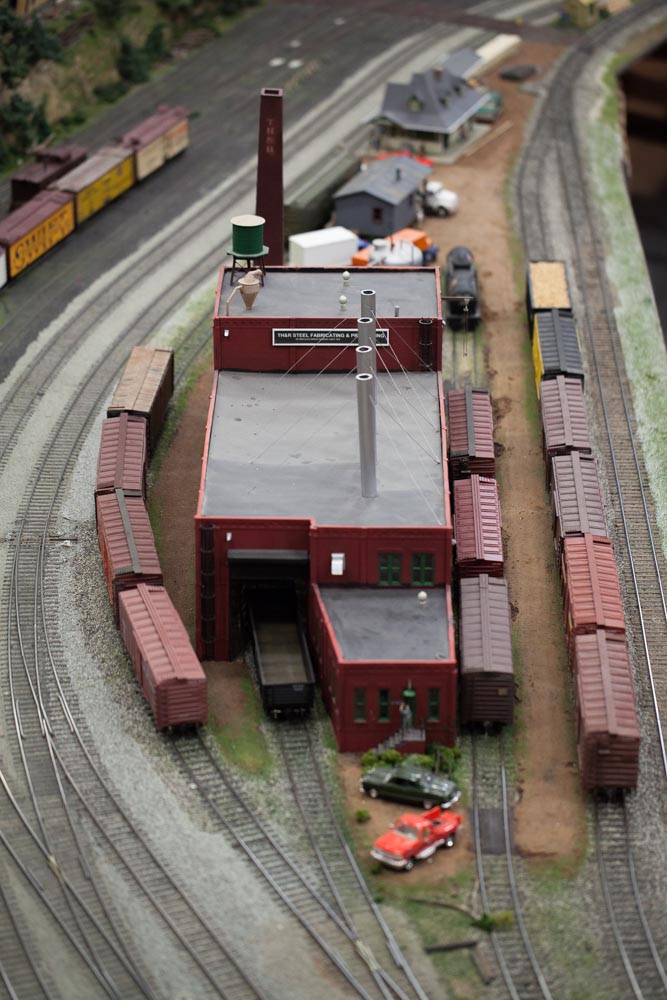 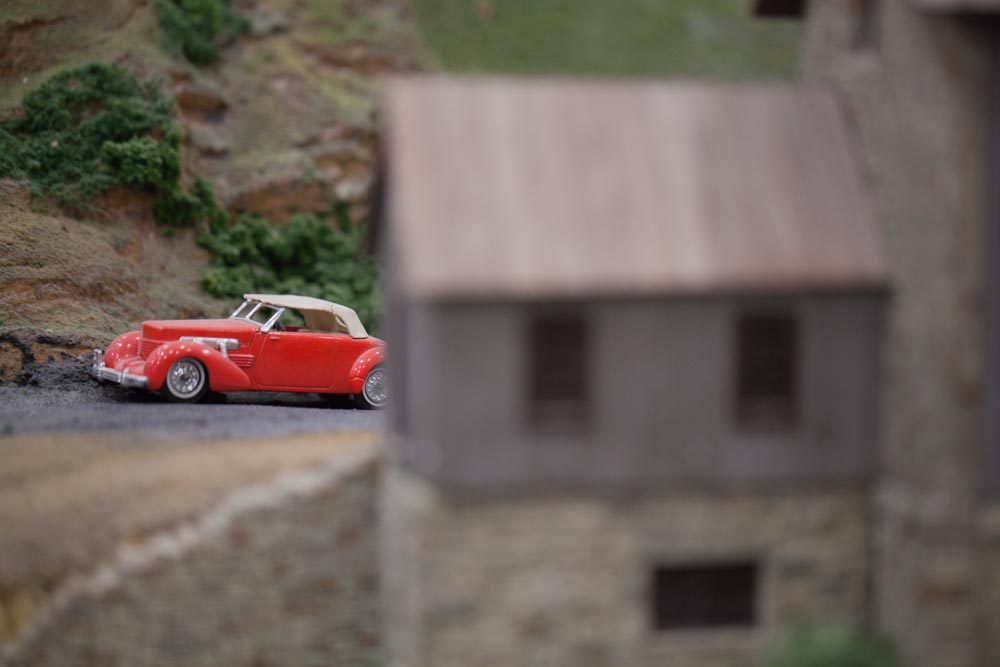 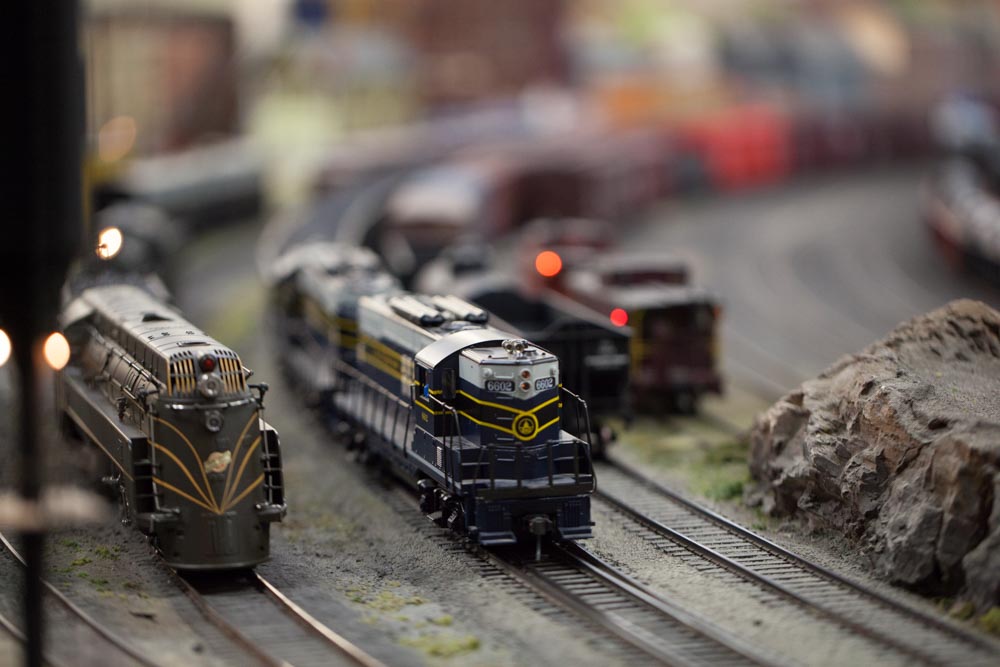 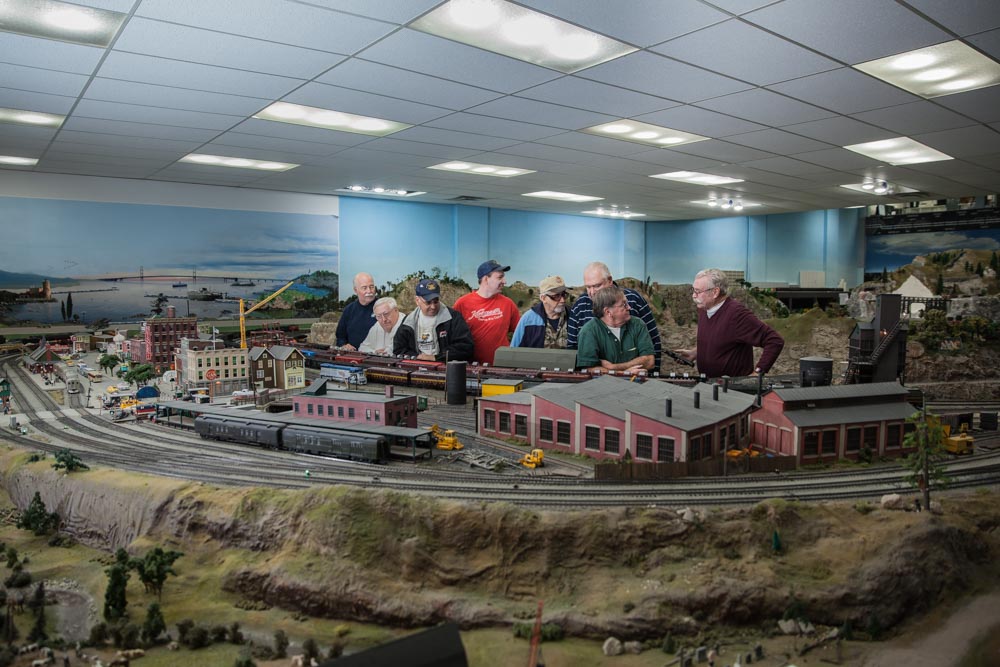 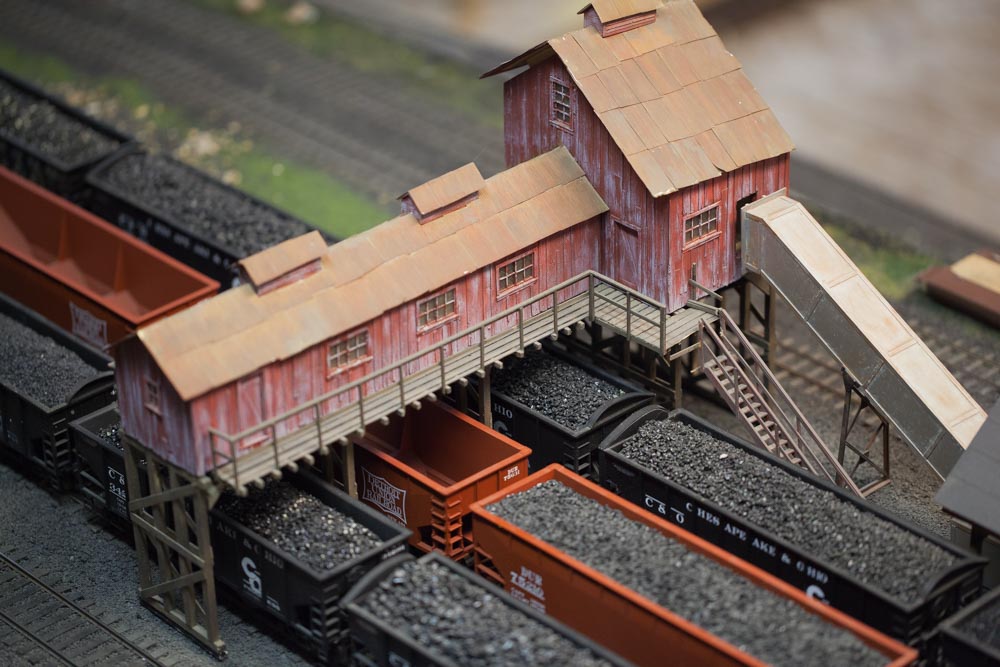 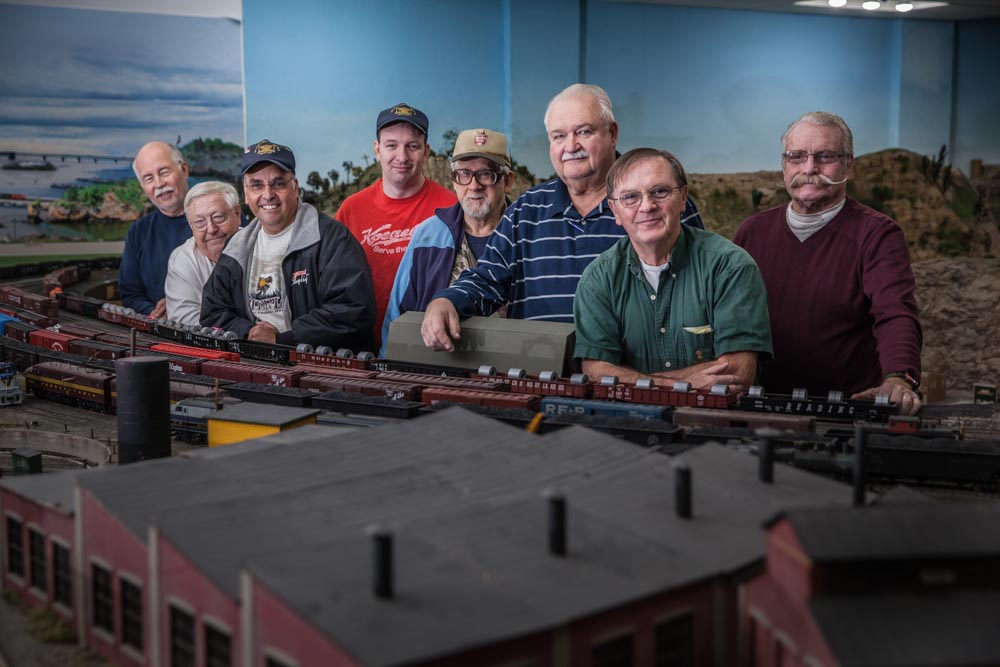 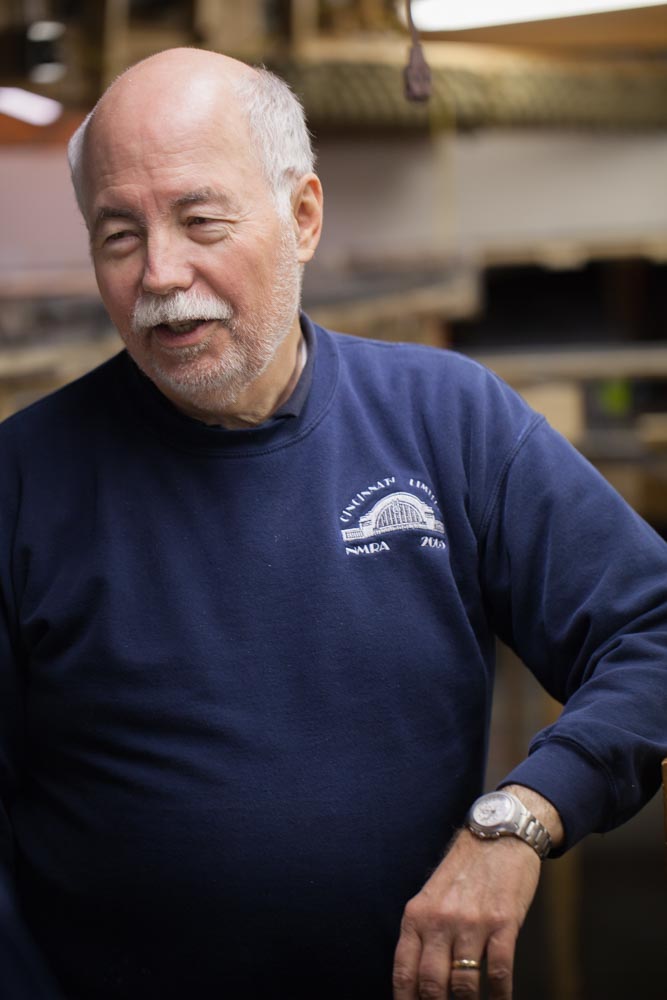 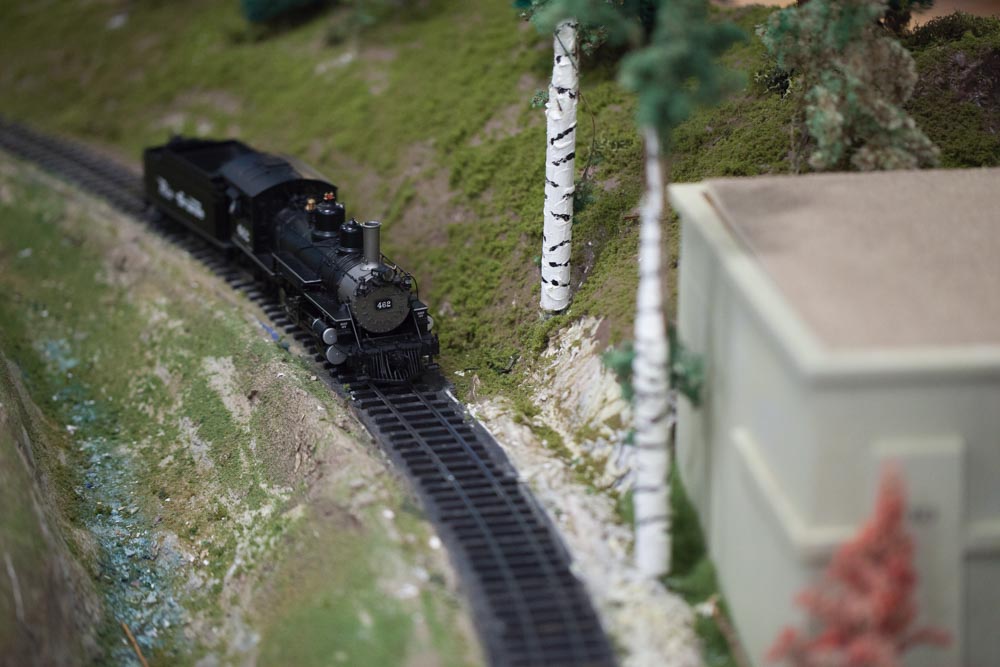 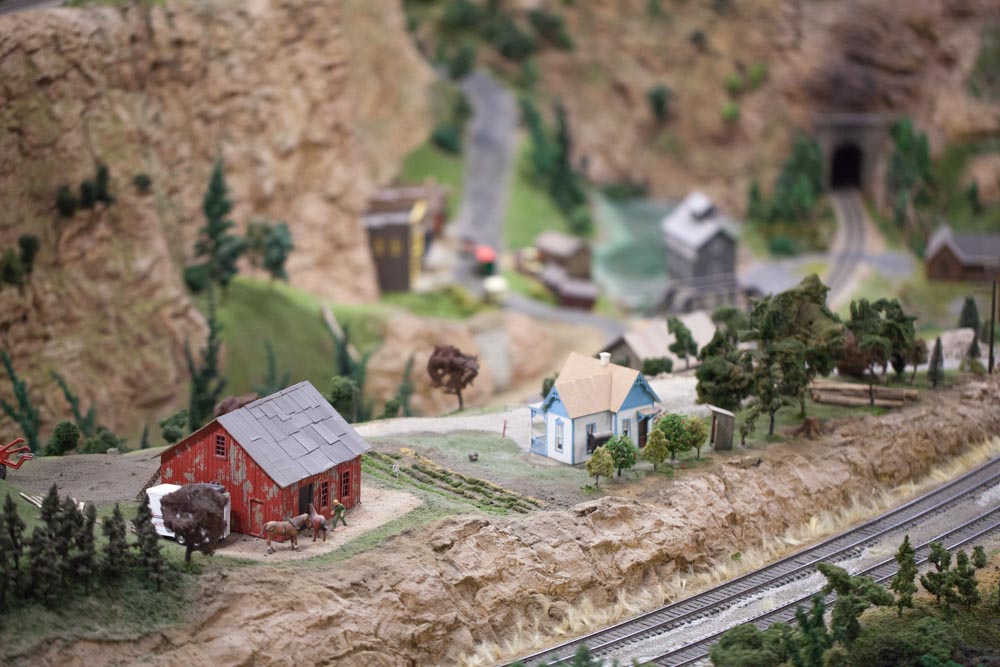 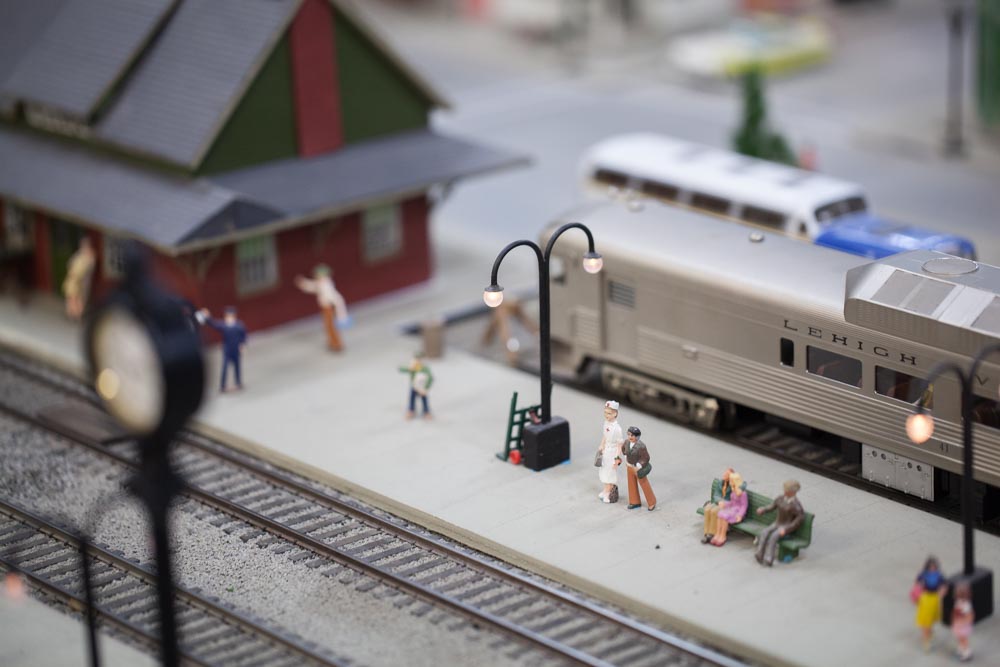 Although they do it mostly for themselves, the member’s great love for their hobby is evident to any visitor who takes time to watch the railroad. The trains are mesmerizing, the detail in the scenery is nothing short of astounding, and if you’re lucky enough to be taken underneath the railroad’s framework, the wiring underneath will amaze. With towns and railroad landmarks named after present and past members – Millersburg, Keetington, Duncan Junction, and the City of Dorrance for the club’s founder, Perry Dorrance – the Detroit Union Railroad also embodies the illustrious history of the club. “We’ve even found a way to incorporate historical pieces from our past,” Dave said. “One of the bridges we have on the line is from 1937, only two years after our club’s founding.”

Trouble on the Track: When asked about accidents on the railroad, Dave laughed, “Gee, that’s never happened before!” In fact, Dave himself made a mistake that resulted in an accident during the grand opening of a new track, no less!

In the 80 years since the Detroit Model Railroad Club’s inception, the importance of the railroad in America’s history has declined, but the club’s members continue to keep the tradition and knowledge alive. These men will continue workin’ on the railroad, all the live-long day (at least, on Tuesdays). “We enjoy each other’s company and we just love O scale trains. Basically, this is what happens when you get carried away,” Dave joked. ♦