From the humblest of beginnings, Thomas Yeotis emerged to lead the most blessed of lives. In fact, when he recalls his youth, emotion still overcomes the beloved, retired judge and Greater Flint Sports Hall of Fame and Mott Community College Bruin Club Co-founder, who turns 87 years old this month.

“In 1929, my mother [Georgia] came to the U.S. after a long boat trip from Greece when she was five months pregnant with me to join my father [Gust] here, even though she didn’t speak any English at the time,” says Yeotis, who was named one of state’s top ten most-respected judges by Michigan Lawyers Weekly during his career. “We lived in a one-bedroom apartment near Doyle Ryder Elementary School, and during the Depression, she washed clothes in the kitchen and hung them in the apartment to dry.”

At this point, Yeotis pauses. 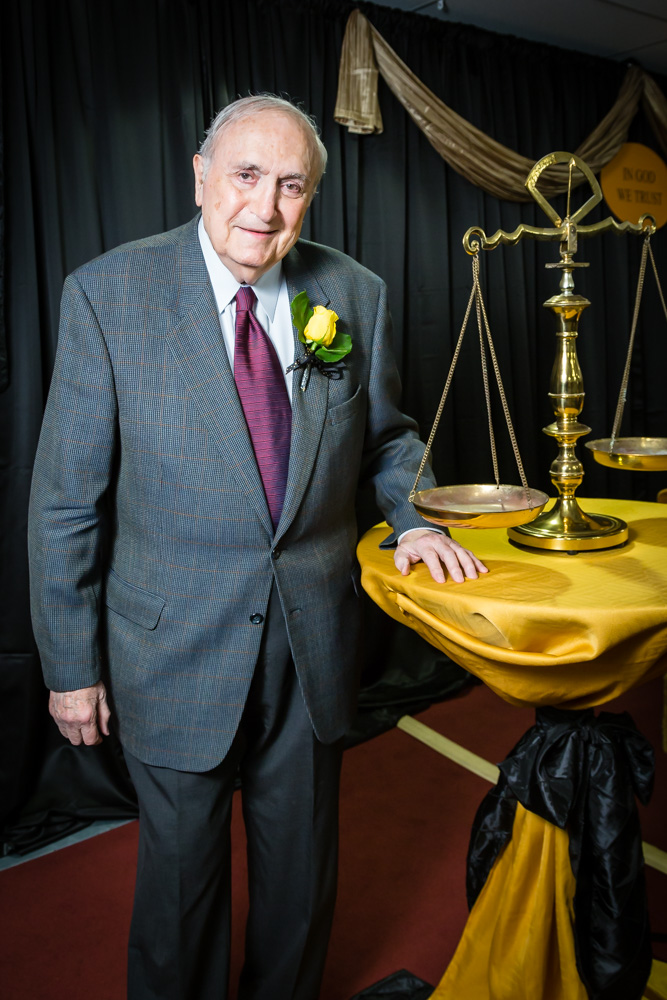 “Wow. I just started crying. But, when I think of the sacrifices my parents made for me, that’s an easy thing to do,” he says. “I actually slept on a couch until I was nine when a Coney Island restaurant my father and Uncle Harry opened allowed us to move into a house on East Street near where the YMCA is now. But my parents did not own a car until after I graduated from high school. Before that, my father walked to work seven days a week. I was blessed to have parents like them.”

Yeotis, a Flint Central football, basketball and baseball standout, Mott Community College basketball starter, and Greater Flint and Michigan Amateur Softball Hall of Famer, has been honored countless times for his athletic and professional accomplishments and selfless charity work. Still, he was a bit taken aback when told that the Foundation for Mott Community College was planning a tribute to him as “MCC’s favorite son” on November 17.

“I was surprised, honestly, and at first told them I thought it might be a failure because so many friends and other people who have been a part of my life are gone now,” said Yeotis prior to the event. “I love that the event was a fundraiser for a great cause – the work of the Mott Foundation. Mott really does mean so much to me.” Probably not as much as Yeotis means to Mott, however.

In addition to the Bruin Club, which has raised nearly $3 million for Mott athletics since its founding more than 50 years ago, Yeotis has served as Foundation for Mott Community College Trustee and Chairman, and as a president of Mott’s Alumni Association. He still serves on the Bruin Club’s board of directors and has established basketball and jazz scholarships in his name.

“Jimmy King, the Mott Foundation Chair, thought it would be a nice way to pay tribute to Judge Yeotis for what he has done for Mott, as well as raise funds for the Foundation’s work,” says Foundation President, Lennetta Coney. “At first, he was a little reluctant because he wasn’t sure if enough people would be interested in attending; but we told him not to worry and to just to sit back and let us plan this one.”

Yeotis has earned some 30 awards from various community, professional and education organizations, including being named the Flint Area Chamber of Commerce’s C.S. Mott Citizen of the Year in 2001.

From Mott, he has received the Distinguished Alumni Award and the William Blamer Distinguished Service and Alumni-Athlete of the Year awards from the Bruin Club. His connection to Mott was simply too strong for the tribute event not to be well-attended. “He has been such a big part of many things to promote the college. Really, he is interwoven into the fabric of our institution,” Coney adds.

In the fall of 1947, Yeotis’ association with Mott, then known as Flint Junior College, began when he enrolled in classes and joined the basketball team. “It was ordained that I go to college because my family placed such an importance on education, but at the same time they were not really crazy about me going away from home either, and that’s what made Mott the ideal place,” says Yeotis, who at times can hardly believe he is still so attached to the school nearly 70 years later. “The campus was very different then, as most of the students were preparing to move on to four-year colleges and there were so many World War II veterans there on the G.I. Bill.”

Yeotis performed academically well enough to continue his education at Michigan State,where he earned a business degree. Taking business law classes along the way sparked his interest in the legal profession, but not without hesitation. “I wasn’t sure if I wanted to go to school for another three years and was not sure about passing the LSAT [Law School Admissions Test], but I found out that all I needed to attend Wayne State Law School was a bachelor’s degree, so that’s where I wound up.”

In 1956, Yeotis was admitted to the State Bar and returned to Flint, setting up his first law practice with a $2,000 gift from his father. The year 1967 marked a major turning point in his life. He began a distinguished, 32-year tenure on the bench, starting as a municipal court judge before moving to probate and finally circuit court. Later that year, Yeotis co-founded the Bruin Club with friends Bob Lambert, Lou Baum and Eldon Miller.

“I had been attending Mott basketball games since I had moved back to Flint and became active in the Mott Alumni Association,” Yeotis says. “We were just looking for ways to raise money for Mott athletics. That’s how the Bruin Club started. I have to credit Bob Kerner for showing us how bingo and raffles could be great fundraisers.”

Among other things, the Bruin Club has provided busses for athletes, the Ballenger Field House scoreboard and athletic scholarships, and played a major role in developing the Kearsley Park baseball and softball fields that Mott’s teams use.

In 1980, Yeotis and Bruin Club members founded the Greater Flint Sports Hall of Fame with Yeotis serving as its first president. “We had been talking about starting a Hall of Fame over the years and went to the Michigan Sports Hall of Fame in Detroit to get started,” Yeotis says. “I remember writing the by-laws during breaks at work. We invited Al Kaline to speak at our first induction ceremony, because we were worried about attendance being low.”

In 2008, a 600-pound, 6-foot-tall bronze statue of a snarling bear with one paw resting on a rock was unveiled at Mott, the culmination of an effort that began with Yeotis, who donated $5,000 of his own money. “I got the idea driving past the Bulldog statue in front of Kettering University and thought Mott should have something like that,” he said.