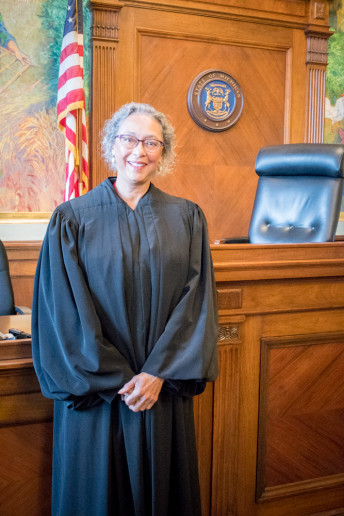 The Honorable Celeste Bell was appointed to the bench of the Genesee County 7th Circuit Court by Gov. Rick Snyder to replace retiring Judge, Archie Hayman. Humble and down-to-earth, she came to the position highly recommended by the legal community. Additionally, the newly appointed judge brings extensive knowledge and experience with her. She previously served in the Genesee County Office of Corporation Counsel as the Chief Assistant Prosecuting Attorney of the Civil Division, serving as legal advisor to the Genesee County Board of Commissioners and all County departments, and acted on behalf of the County on civil matters.

Judge Bell grew up in Detroit and is a third-generation attorney and second-generation judge.

Her father, Edward Bell, was a lawyer and former Wayne County Circuit Court Judge appointed by Gov. George Romney. “He was my inspiration,” she says. I watched him practice in many different areas of the law. He passed away in 1988 and I miss him every day.”

Judge Bell attended University of Michigan-Ann Arbor, obtaining a bachelor’s degree in 1978. She earned her law degree in 1986 from Golden Gate University School of Law in California. After graduation, she began working as a staff attorney with the Ninth Circuit Court of Appeals, serving as the head of the Civil Motions Unit in her two final years. From 1991 to 1994, she worked as a Deputy City Attorney on the litigation team in San Francisco.

Bell moved back to Michigan in 1994 and left the practice of law for a few years. “I took some time off to be a pastry chef,” she says with a smile, which was something she loved and always wanted to do. “I had my own business and specialized in wedding cakes. I loved it, but being a chef is a hard life.”

After a few years, she decided to return to the law. She saw an ad in the State Bar Magazine and applied for a position in Genesee County. In 2005, she was hired by Ward Chapman who, notably, was the longest standing Corporation Counsel for Genesee County. Based on her level of experience, she hired in as a Senior Assistant Attorney to Ward. She remained in that position until 2011 when Ward retired, then served as the Interim Corporation Counsel and later as Corporation Counsel. The office merged with the prosecutor’s office in 2015, after which Prosecutor David Leyton became the county’s Corporation Counsel and Judge Bell became his Chief Assistant of the newly named Civil Division. “I have had a fabulous working relationship with Prosecutor Leyton,” she says. “I’ve been remarkably fortunate to have a career of fantastic jobs and a series of the best bosses and mentors.”

Bell was encouraged by many people to apply, including Judge Joseph Farah, and Chief Judge Richard Yuille, who were both very supportive. She also spoke with the retiring Judge Hayman who supported her as his successor. There were several other applicants for the position and the first step was a State Bar Qualifications Committee interview. As she entered the room for the interview, she felt a bit daunted by the 16 or so people sitting around a big, oval table. “I told myself, ‘I can do this. Game on!” The committee ranks the applicants and makes a recommendation. Two or three applicants are then selected to be interviewed by three members of the Governor’s General Counsel Staff, and Bell was one of them. This group made a recommendation to the Governor who, by law, makes the final decision regarding judicial appointments.

For the next few weeks, Bell and her good friend and co-worker, Brian MacMillan, anxiously awaited “The Call.” She remembers, “I was so nervous that I would miss the call.” After waiting for weeks, it finally came on February 5 at 8:20am. It was a representative from the Governor’s office telling her that the Governor would be calling. The first thing she did was call Brian. “I got the call!” she told him. “He was very excited for me. Then, I called my mom. That was a happy day.” Gov. Snyder called her at 3:00pm. “It was the best one-minute phone conversation I’ve ever had.”

Judge Bell was sworn in two weeks later by Judge Yuille. The investiture, or official swearing in, was held on March 6, at the Harris Auditorium and attended by members of the public, community leaders, family members, and judges, including retired Judge Val Washington who held the seat prior to Judge Hayman, who both spoke at the investiture. Prosecutor David Leyton was the master of ceremonies. 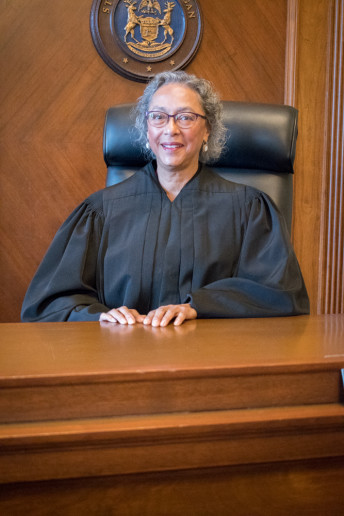 Since then, Judge Bell has been settling into her new position. Her first day was what she describes as, “a long, hard day.” But, she admits, “I was so happy to be there. Every day is a new adventure. I’m so energized to learn new areas of the law.” Her judicial philosophy is: “I am committed to being fair and impartial and to applying the law as it is written while being compassionate and empathetic.”

Judge Bell is the first African American woman to sit on the Genesee County Circuit Court. “It’s an honor,” she reflects, “and, a little remarkable that I am the first. I bring a lot to the bench – a lot more than being African American and female. But it is significant and a shame that it took this long.”

Bell looks up to Judge Judith Fullerton, who has been the only woman seated on the Circuit Court bench since first taking office in 1983. “She is my teacher, mentor and friend,” she shares. Bell also admires former First Lady, Michelle Obama. “She was a lawyer and a supportive partner, but also an individual in her own right. I admired her philosophy when she said, ‘When they go low, we go high.’ Those are words to live by.”

In her spare time, which she says is very minimal, Judge Bell enjoys her two dogs, Taylor, a Doberman and Thruma (which means Thunder), an Icelandic Sheepdog. She also has an African Grey Parrot with a vocabulary of over 200 words. “She will chastise the dogs. It’s fun to have her in the house,” Bell says. She also enjoys reading, dog sports and gardening, in that order.

Judge Bell will be running for the seat as the incumbent in the November election, which she is required to do. “I am humbled by the amount of support I’ve received from my peers and feel extremely grateful,” she says. “I did not know I would love being a judge as much as I do. I have been given an opportunity to excel. It’s long hours, hard work, and I absolutely love it.”

“I did not know I would love being a judge as much
as I do. I have been given an opportunity to excel.
It’s long hours, hard work, and I absolutely love it.”