The unbridled intensity and raw energy of flat track motorcycle racing is easy to appreciate.

During competitions, roughly 15-20 riders negotiate laps of half-mile or one-mile tracks covered by a 12-15-inch dirt base that is topped with a layer of decomposed granite. Riders remain in a tightly tucked position on the straight-aways while reaching speeds of more than 130mph on longer ovals. 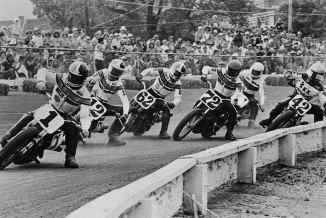 On the turns, they pop up from their tucks, lean their bikes at sharp angles and extend their inside legs, briefly dragging steel-bottom boots on the track while jockeying for position. In this revved-up environment, there is no shortage of crashes – but the participants would not have it any other way.

Several of the sport’s all-time greats have called the Flint-area home.

The first was Bart Markel, who captured three American Motorcycle Association Grand National season championships between 1962-66. Markel, who died in 2007, is still ninth on the all-time Grand National wins list with an impressive 28.

Jay Springsteen won his first race as a teenager in 1975 and remained competitive until retirement in 2003, winning three season titles along the way. He is third all-time with 43 career wins.

Nobody collected more championship hardware than Scott Parker, however. He also first tasted victory in a Grand National race as a teen in 1979 and retired in 2000 with a record nine season championships and 94 career wins. Nobody else has more than 78. 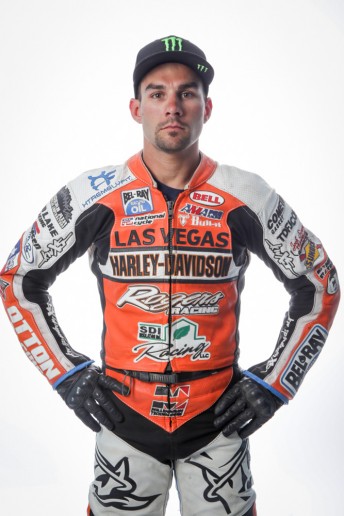 Clio resident Jared Mees, whose career is far from finished, belongs in the same conservation. That’s because he has actually accomplished something none of the three were able to – win four Grand National season championships before turning 30 years old.

Mees, who reached his 30th birthday last month, put the finishing touches on his fourth title in seven seasons by placing third in last fall’s season-finale in Las Vegas. Mees won only once in 2015, but was ultra consistent, placing in the top five in ten of 13 races and finishing with 204 points – 23 more than chief rival Bryan Smith of Flint, who is currently 14th on the all-time wins list with 22.

“Yes, consistency is always the key to a successful season,” says Mees, who also won the first-ever American Superprestigio race on the same track the day after clinching the title. “You have to race well at different tracks which all present their own challenges. There are things you have to watch for at each venue and stay motivated and energized over the course of many months.”

Mees has 17 career wins after taking the checkered flag at the Circuit of Americas Race on April 9 in Austin, TX; but what sets him apart is his uncanny ability to perform well in such unpredictable conditions in race after race, year after year.

In fact, Mees has placed in the top five in 71 percent (75 of 105) of his races since 2009. Through three Grand National races this season, Mees sits third in the standings with 49 points, placing fourth and ninth in the first two races of the year at Daytona prior to his win at Austin. Mees has also won races in Savannah, GA and San Jose, CA this year. 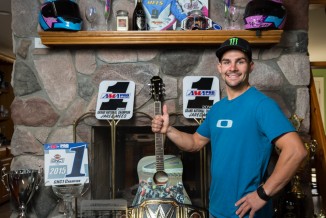 The Austin win, in which he took control over the final five laps, was especially gratifying for Mees as it helped ease the pain of his last race there – the 2015 Summer X Games at which flat track racing was making its debut. Mees seemingly had the gold medal in hand before suffering a fluke mechanical failure on the last lap and finishing 11th. Bryan Smith captured gold.

“With what happened the last time I was in Austin, it was great to get a win there this time,” he says. “I was able to stay out of trouble, get out in front and stay there. One thing you have to avoid is getting caught in little holes on the track that can really slow you down.”

Mees doesn’t plan to let anything slow him down when he returns to Austin on June 2 for this year’s X Games, which will be televised on ESPN and ABC. “I’m hoping to get it done this year and win the gold, because last year was really just a total fluke,” he says. “I’ll approach it the same way, because I’ve already run two good races on the track.” 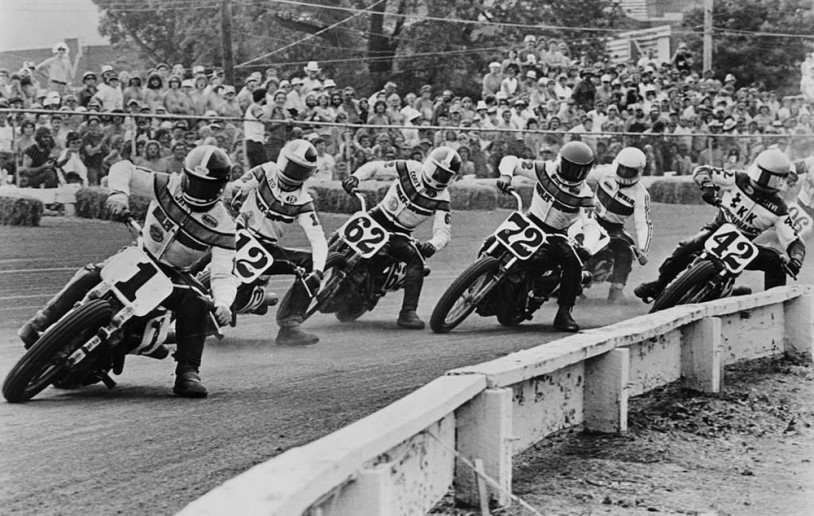 Mees was also part of history at last year’s X Games, as he and his wife Nichole became the first married couple to compete in the same event. Mees first met Nichole, daughter of Flint-area motorcycle racer Mark Cheza, while competing in the same amateur race as young teens. Originally from Honeybrook, PA, Mees stayed with Nichole’s family when he traveled to the Midwest for races, and the two grew close.

In September 2013, the couple married in a ceremony on the track prior to the Springfield Mile race where they first met and where Mees had proposed. After riding off the track on the same motorcycle, the pair quickly changed into their race gear and competed – Jared finished sixth and Nichole, 13th. 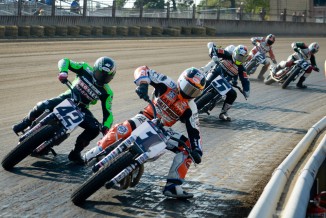 They raced in the Grand National Series from 2007 until last year when Nichole, also a special education teacher, decided to take a break from racing. The second female ever to record points in the Grand National standings, Nichole’s final season was her finest with a pair of Top 10 finishes which helped her to a career-best 20th in the season standings.

“We had such a connection from the beginning because of our backgrounds, and it was great training and racing together for those years,” Mees says. “I’m extremely proud of what she’s done; although, like me, she’s always striving for more. But it was the right time to cut back, because she has suffered some injuries in recent years and sponsorship money has become harder to come by – but Nichole is the most successful female in the sport.”

In addition to the X Games, 11 Grand National events remain along with many other races for Mees, who usually competes in 30-40 events per year.

”The schedule can become a little bit of a grind, especially in the middle of the summer with all the travel, prepping bikes for the races, working out and staying organized, but that’s what I love,” Mees says. “It’s just my nature to keep piling things up and figuring out how to manage everything. Competing in those non-Grand National events is important because it helps me prepare for situations in bigger races.”

Mees’ schedule indeed requires boundless energy which he never seems to lack. He spent part of Thanksgiving Day washing the Harley-Davidson 750 and Honda 450 bikes he races on and was mountain-biking at Holly Recreation Area on his birthday. Mees also uses a rowing machine and lifts weights to remain fit.

“Physical fitness is important to doing well over the course of a long season and having a long career,” he says. “There are single races, though, when I might get beat by a guy who I know ate McDonald’s that morning and played video games all week.” 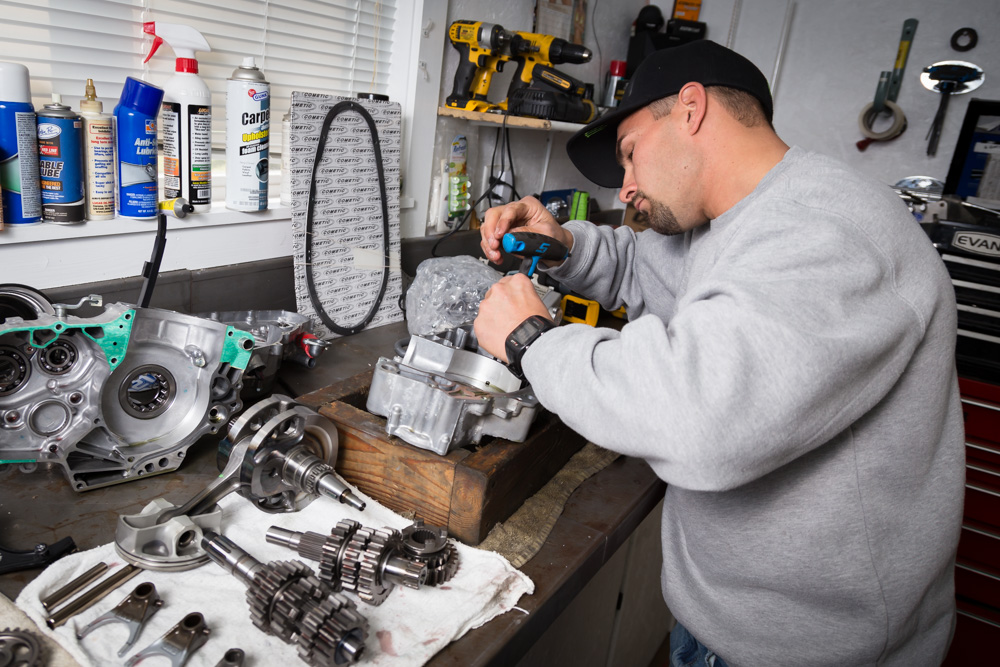 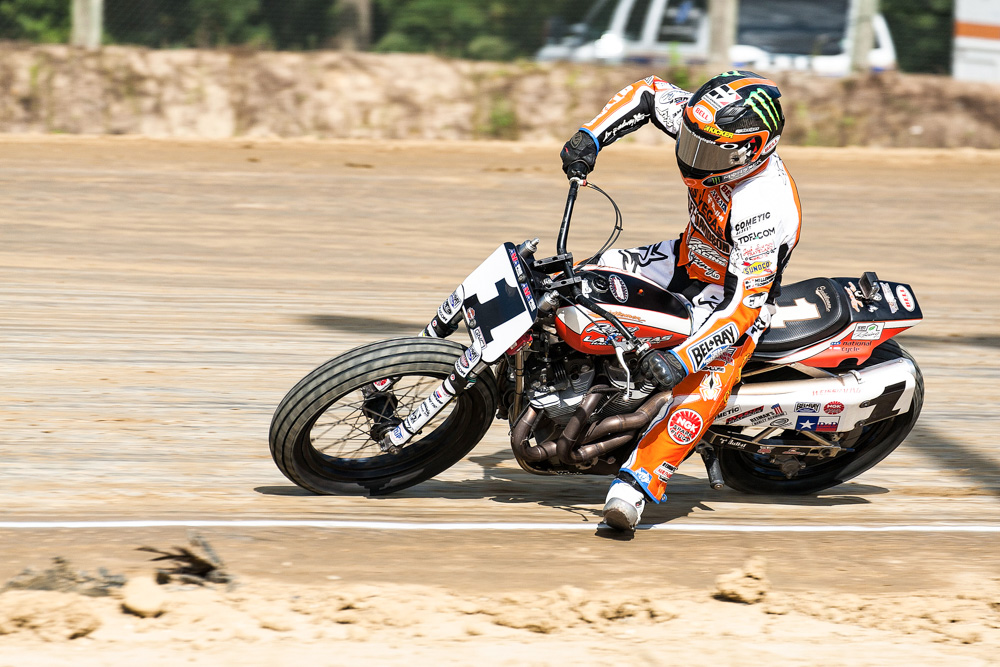 Mees began racing at age six at the urging of his father, a motorcycle mechanic. In 2003, he competed in his first Grand National race at age 17 and was named AMA Flat Track Rookie of the Year in 2004, also the year he moved to Clio. He won his first season championship in 2009.

“Jared has been tenacious on the track since he joined the Grand National series, and we expected that his determination and the well-prepared Blue Springs crew would one season produce a championship,” Harley-Davidson Racing Manager, Anne Paluso, said at the time. More season titles followed in 2012, 2014 and 2015.

“I started to have success at racing and that kept me going, because it was so fun and I wanted to see how far I could take it,” Mees says. “I always look forward to race day and feel very fortunate that I can make a living at something I love; because, if not, then it’s just a hobby and hobbies turn into expenses.”

As for Scott Parker and Jay Springsteen, they have not hung up their helmets entirely. In fact, Springsteen, now 59 and Parker, 54, are scheduled to duel in an exhibition race prior to the Sacramento Mile on May 21. 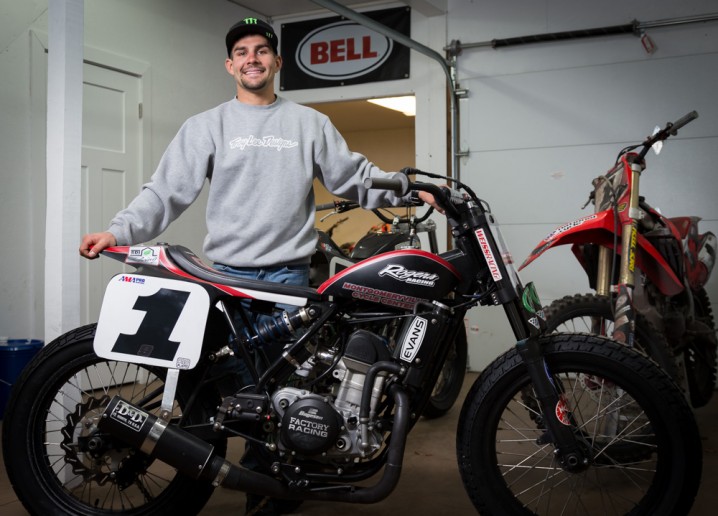 “Not only will the fans get to see these two icons of the sport speed around the mile, there will also be opportunities to meet with Jay and Scotty to get photos and autographs,” race organizer Steve McLaughlin stated on the event’s website. “These are two of the most beloved riders in all of motorcycle racing – not just here, but globally – and we’re pleased to be able to bring them together for this unique meeting.”

Added Mees: “I know both Jay and Scotty well, and they are certainly guys I looked up to, especially Springer – he is the man. It will be very cool to watch them show what they can still do on a dirt track at their age.”

One day, flat track enthusiasts will undoubtedly be saying the same thing about Mees.