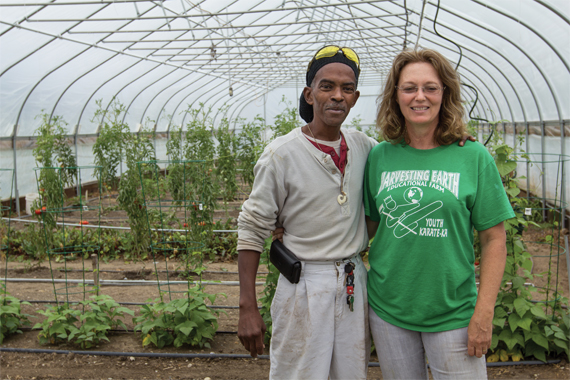 “This is our city. It is our town, and this is how we are going to turn it around. Plant the seeds and watch them grow for our community and economy, our destiny and family.”

These are the opening lyrics of a rap song written by Flint high school students. The song was used as the soundtrack for a documentary entitled, The Kings of Flint, which features Jacky and Dora King and their Youth Karate-Ka: Harvesting Earth Farm. The couple also owns King Karate, but Jacky is not just a businessman: he’s a martial arts instructor, a Mt. Morris Township Trustee, urban farmer, orchard owner, master gardener and composter. He is a church member, husband, father and grandfather. Most importantly, he’s playing a major role in Flint’s revival with his passion for urban farming.

When Jacky was 19 years old, he was unsure as to what direction to take in life. He was walking down Saginaw Street when a thought struck him like a lightning bolt: karate. So in 1973, he began training in martial arts, and in the past 40 years, there hasn’t been a single day that hasn’t involved karate. Currently, he is working toward his 10th Degree Black Belt, which is the most prestigious designation, while Dora has earned a 6th Degree Black Belt. She and Jacky met 28 years ago at a social outing. “We spotted each other and it was a done deal,” he said with a big grin. “It was the best sales job I ever pulled off.” He talked her into coming to Flint with him and they opened King’s Karate School together in 1987.

King’s Karate students learn about discipline, respect, focus and self-confidence. Education about self-sufficiency and community service is also part of the school’s curriculum. Harvesting Earth Educational Farm, the Kings’ urban farm located across the street from the karate school, provides the opportunity for students to practice the latter two requirements. The two-acre farm is located on property formerly used as a dumping ground. “People would drive up in the middle of the night and dump there,” said Jacky, and he remembers thinking to himself, That property needs to be put to good use. Then he had a thought. Why not turn it into something useful? Why not urban farming? With so much vacant land and so many abandoned homes, it is now Jacky’s dream that Flint could one day be the largest urban farming area in the nation.

Farming was already in Jacky’s blood; growing up, he spent summers working on his Uncle Alvin’s farm in Millington, MI, selling eggs door-to-door and riding on the tractor. Jacky decided to buy the vacant property, but it would be a long time before his vision came to fruition. Two years of sweat and toil were spent clearing the land: “hand by hand, volunteer by volunteer,” as he describes it. After the land was cleared, Jacky put up the first of three greenhouses in 2008 with funding from the Ruth Mott Foundation and Michigan State University technical assistance. The second greenhouse was built in 2010, also with the help of the Ruth Mott Foundation and MSU. A third greenhouse, which is handicap accessible, was built in April of this year. The Kings hired a company to install the greenhouse, and with the help of ninth graders from Beecher High School it was built in just 11 hours. As a teaching farm, they host many field trips. “This is hands-on learning at its best!” exclaimed Jacky. Volunteers help run the farm and Jacky says that almost 3,000 volunteer hours were logged last year.

Harvesting Earth Educational Farm now has 40 vegetable beds. They recently became organic-certified, and will be adding 17 more beds. During the summer months, Jacky and Dora grow a wide variety of vegetables, including green beans, tomatoes, cherry tomatoes, peppers, chard and beet greens. In the winter, they grow snap peas, spinach and other cold-weather vegetables. Perennials on-site include raspberries, asparagus, strawberries, herbs and rhubarb. Their produce is sold at the Flint Farmers’ Market, at the karate school market, and at local restaurants and retail stores such as Dale’s Natural Foods. The farm also includes a coop for chickens and guinea fowl, as well as peacocks and quail, which will arrive soon. In addition to produce, Jacky reports that his beehives are also buzzing with activity. “Honey was our biggest seller last year,” he boasted.

The Kings’ latest venture is the Harvesting Earth Educational Orchard. In 2009, Youth Karate-Ka, the Kings’ nonprofit organization, found three acres of land in Mt. Morris Township perfect for their new dream. Last May, 200 fruit trees were planted on this property, including apple, peach, pear and cherry. The Fruit Tree Planting Foundation, the Earth Day Network and the United Parcel Service partnered to fund the project. The ultimate goal is to have a farmers’ market at the orchard. Jacky wants people all over the county to have fresh fruits and vegetables on their dinner tables, and “a lot of people in Beecher can’t get to the Flint Farmers’ Market,” he says.

Jacky and Dora are busy all the time with the karate school and urban farming, but they wouldn’t have it any other way. They still find time to spend with family or enjoy a day at the lake. Jacky spends a lot of time helping Flint area churches and other organizations get urban farms up and running. And while he knows it isn’t going fix everything, it’s a step in the right direction. “Urban farming isn’t the whole answer – but it’s a piece of the puzzle.”

Are you interested in purchasing photos from this story? Go HERE and select the “King’s Karate” category.