AT Bangkok Peppers Thai Cuisine in Grand Blanc, fans of hot and spicy Thai food are not disappointed. The restaurant is family-owned and operated by Chad and Susie Rose, their children Charna Flynn and Adam Rose, and uncle, Charlie Pumklin. Bangkok Peppers originally opened in Grand Blanc in 2003 and moved to its new location on Hill Road in 2014. Bangkok Peppers Too opened in Fenton a couple of years ago, operated by Adam and managed by Jennifer Gross. Adam not only runs the Fenton location, he does the cooking and prep work, as well. Charna operates the Grand Blanc restaurant and Uncle Charlie is the head cook there. 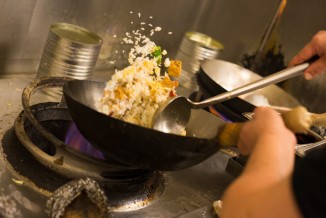 “My mother and my Uncle Charlie are Thai,” says Charna. Charna and Adam grew up eating Thai food and appreciated its simplicity. “The Sticky Rice and Custard is our recipe,” she boasts. Her father used to be a caterer, and it was always his dream to open a restaurant. “The opportunity came about, and they did it,” Charna says. The restaurant’s popularity has continued to grow over the years, and both locations are supported by many loyal patrons.

Why are the eateries so popular? “Our simple, but good, food!” exclaims Charna. “All or our dishes are noodle or fried rice, stir-fry style.” And, there are variations of each style created with difference sauces, vegetables and meats. Everything is cooked in a wok (a bowl-shaped pan) and it takes six months to train a cook in this method. “It takes incredible strength and coordination,” says Charna. “The woks are heavy, and cooks often have to stand for three hours at a time when the restaurant is busy.” 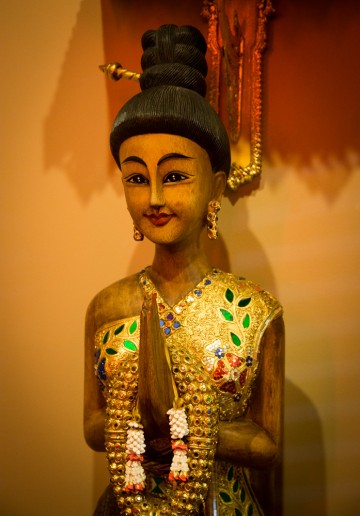 The most-ordered dish at Bangkok Peppers is Pad Thai – thin noodles stir-fried with egg, bean sprouts and green onion, then topped with fresh-ground peanuts. “It’s really good, and by far our most popular dish.” The curry dishes are a little spicier; curry is a spice blend common to  Thai cuisine. And there a three different kinds: green curry is spicy and citrusy; red curry is spicy, and yellow curry is a little sweeter – earthy, but spicy. “Red curry is the most popular,” Charna adds. The spice level of the food is determined by the customer, ranging from zero, mild (some hot pepper added), medium (a comfortable burn), hot (ask for a pitcher of water) and extra hot (for seasoned professionals only). “People like spicy food,” she exclaims. “It warms you up!” 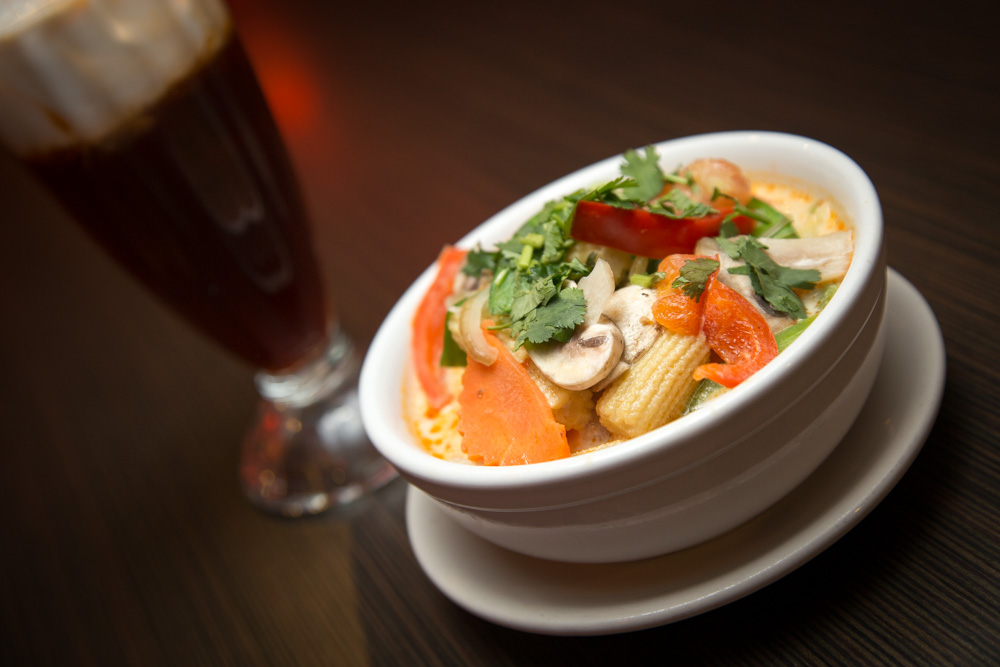 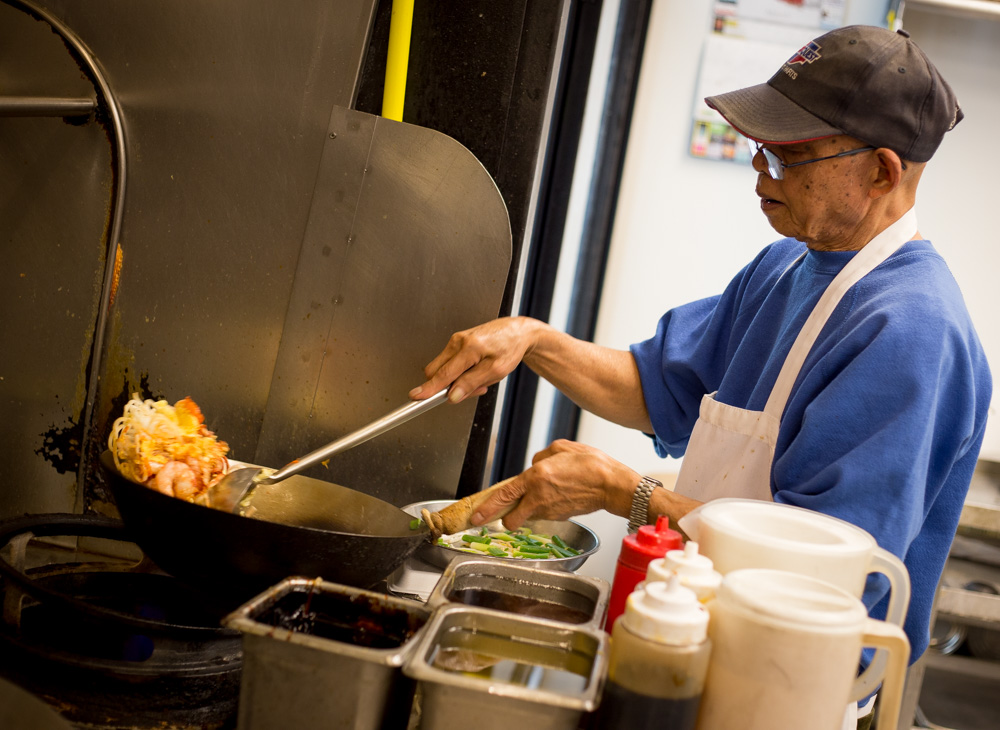 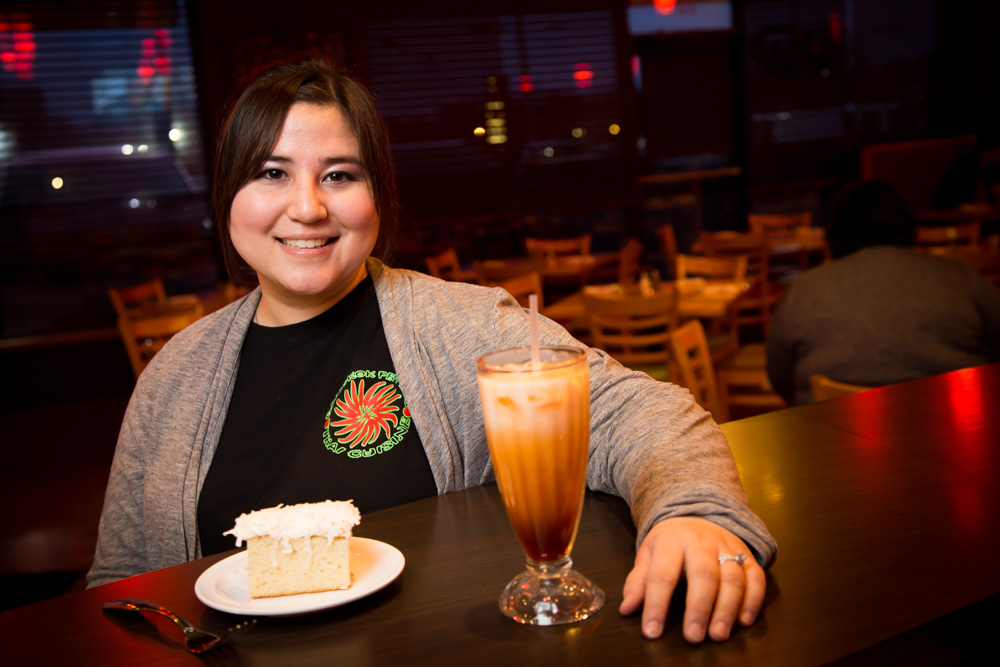 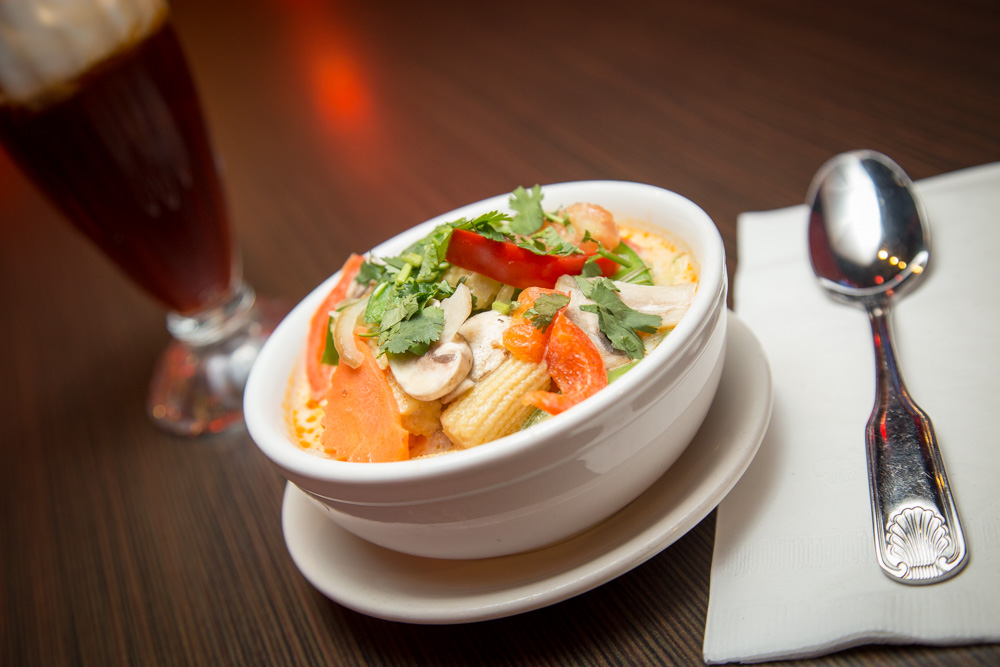 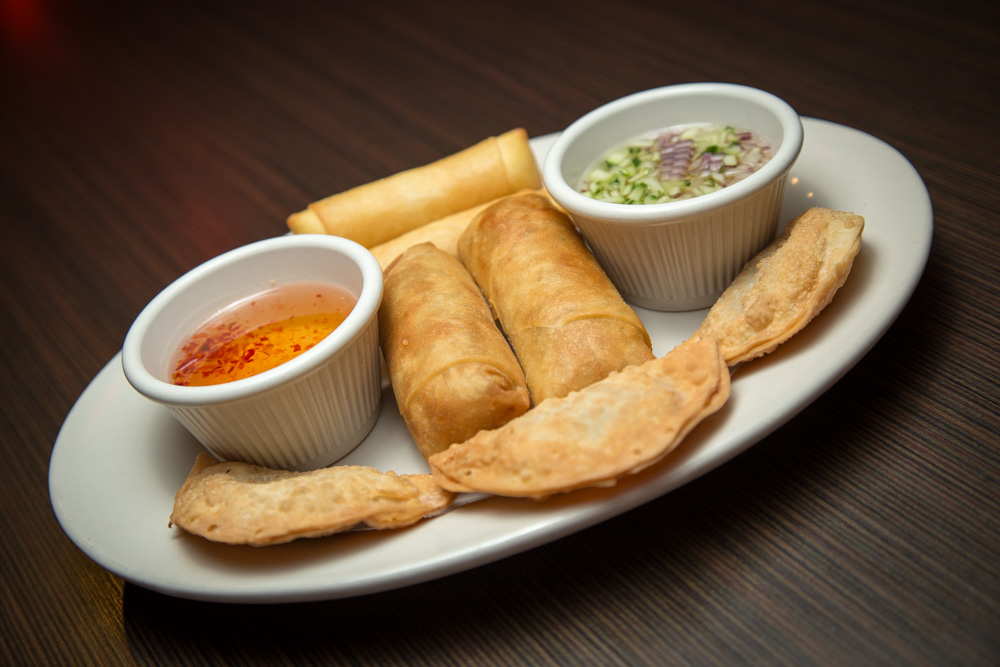 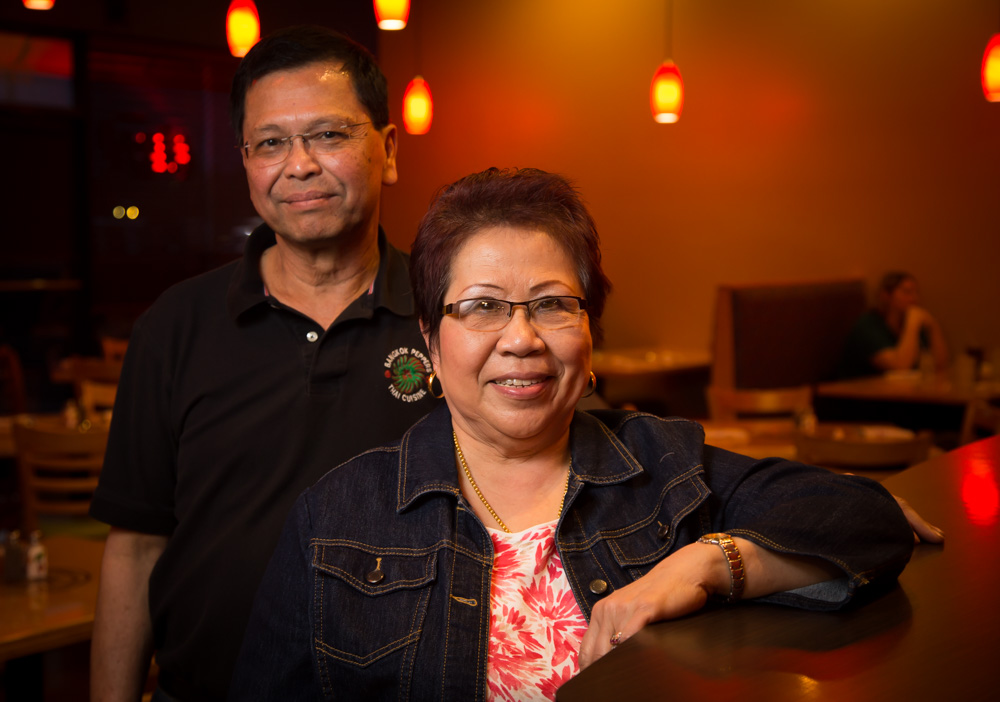 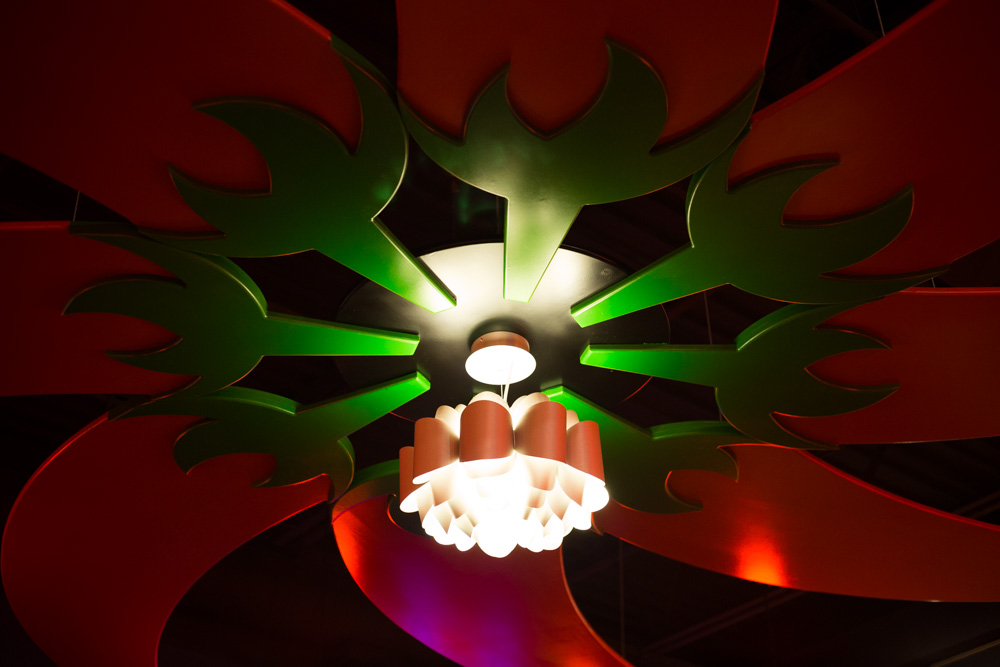 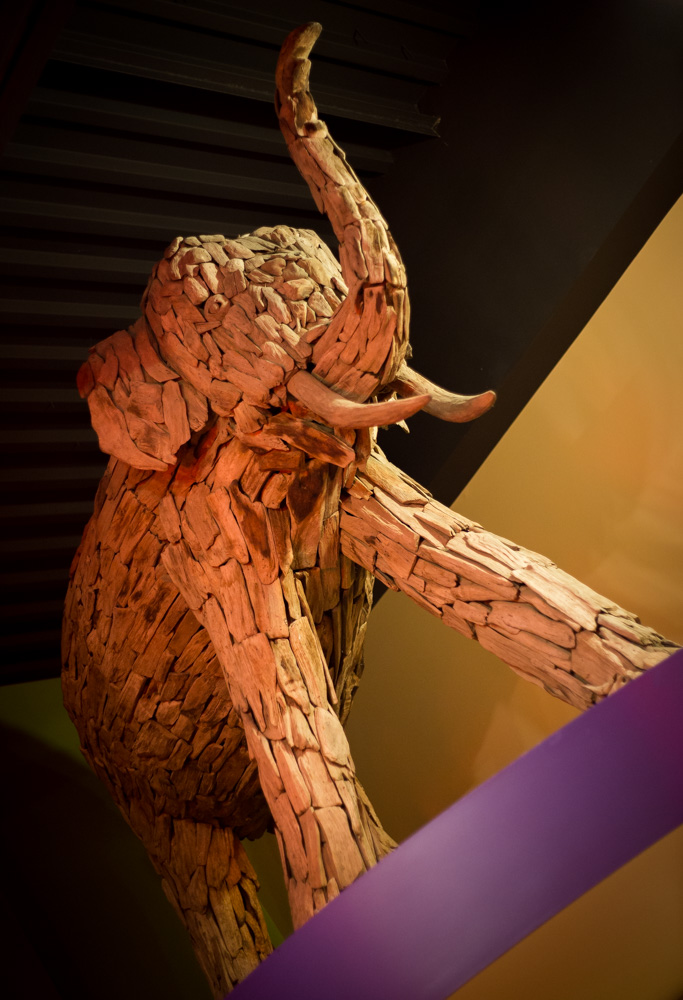 What makes the food so good, the owner says, is that everything is fresh; the meat and vegetables are prepared every day. There are three freshly-made soups on the menu – Tom Yum – a popular Thai recipe made with lemon grass, mushrooms, onions, tomatoes, Thai herbs, lime juice and cilantro; Tom Kha, which is a richly seasoned coconut soup, and Chicken Rice Soup. “Dad makes the Chicken Rice Soup every morning,” says Charna, adding that dine-in customers enjoy complimentary soup with lunch and dinner. And after something hot, you need something sweet! Desserts include Coconut Pudding, Sticky Rice & Mango, Sticky Rice & Custard, and Coconut Cake (made on the premises and served only at the Grand Blanc location).

The décor at the Grand Blanc restaurant features a Teakwood Elephant which was once in the collection of Flint notable, Bob Pernai, and now on loan from a private collector.

Bangkok Peppers and Bangkok Peppers Too employ a staff of 30-plus, many of whom are family members. “We promote a family atmosphere among our staff and our guests,” Charna says. What she enjoys most as a restaurant owner is the customers, and the many people she interacts with every day. “Our entire family appreciates every single person who walks through our doors,” she says. “We treat our customers like family. Our loyal patrons have kept our doors open for over ten years. They grew up with us!”