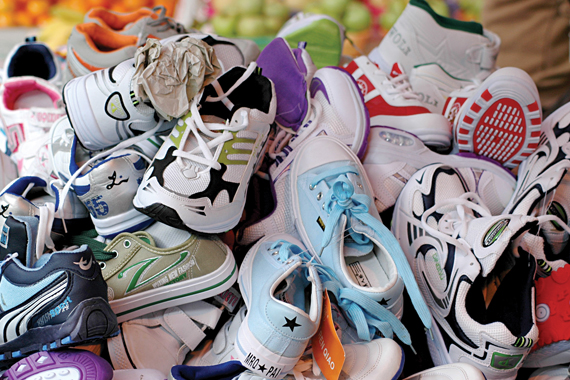 Spring: birds are chirping, flowers are … possibly buried beneath some snow, and people are pondering the great question, “Is this the year I finally run the Crim?”

I’ve been there. Five years ago, I decided I was going to run the Crim, the auspicious road race through Downtown Flint that will celebrate its 37th year this August. If you’ve never run before, you’re probably receiving encouragement and advice. One tip you’ll hear ad nauseam is “Invest in a good pair of shoes.” Moreover, your experienced runner friends will urge you to be fitted at one of Flint’s running specialty stores like Bauman’s or Complete Runner. When I heard such things, I thought to myself, I’m not trying to beat the Kenyans here, I am just trying to finish! There is no way I’m spending a bunch of money on running shoes.

Maybe I can spare you some pain by sharing my experience, and just so you know, I’m talking about pain in the literal sense. After my first month of training, I lost two toenails, experienced the most excruciating foot numbness imaginable, shin splints, knee pain, etc. You get the idea. I was about to give up, but because my decision to do the Crim had also been a commitment to honor a friend diagnosed with terminal lung cancer, I had to find a way.

One great thing about Crim training is that no matter what ails you, someone in the group has been there. Whatever the trouble, they ask the same question: “How do your shoes fit?” Everyone advised me to seek professional help. I was going to see a podiatrist anyway, because I had diagnosed myself with about 30 horrific ailments due to the weird, painful numbness in my toes.

Dr. Shawn Reiser of Community Podiatry in Flint discovered that the numbness was due to my metatarsus – the bones in my feet – rubbing against my nerves. A metatarsal pad in my shoe was the remedy. Dr. Reiser also confirmed the importance of the right shoe. She told me, “Investment in the correct shoe, in combination with a proper training regimen, will allow a lifetime of optimal, injury free running.”

So, I caved and had a shoe fitting. That’s when I learned the awful truth: I’m an over-pronator. In simple terms, the arches of my feet curve toward each other, which causes twisting in my legs and subsequent pressure on my knees. The shoes I was wearing were for under-pronators or neutral runners; they offered no support and may have exacerbated the problem. At the running store where I had my gait (running form) analyzed, the walls displayed an assortment of adorable running shoes. I waited excitedly for the nice man assisting me to bring the shoe he recommended. When he came back, I gasped in horror. It was not one of the cute shoes from the wall; it was Franken-shoe. He also told me to go up a size, so my ugly shoes were also freakishly large.

Yes, it was frumpy and ugly, but it also made me love running. Just that little adjustment to my arches helped with the knee and hip pain, and the bigger size remedied the toenail issue. Five years and a lot of “right shoes” later, I have managed to finish four Crims, eight half and two full marathons. The shoes didn’t do it all, but the right shoes have kept me in the race.

Leslie Toldo has reported on healthcare and medical issues on Michigan TV sets for nearly 20 years. She grew up in Baton Rouge, LA and graduated from the University of Wyoming with a Communications degree in 1990. An avid runner, Leslie is also a member of the Board of Directors at the Humane Society of Genesee County. She lives in Linden with her husband and three big dogs: Daisy, Bear and Gus.