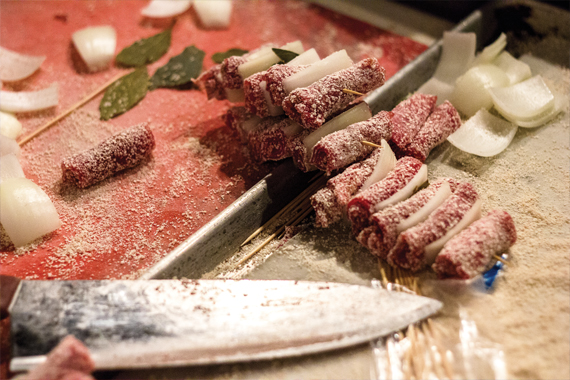 On a cold winter day, there is nothing more comforting than a hearty meal of pasta topped with a full-bodied, sweet tomato sauce and meatballs! At Italia Gardens, one of Flint’s oldest restaurants, that’s what you’ll find. The welcoming eatery is rich in history – Italia Gardens was established in 1931 during the Great Depression, the city of Flint’s first Italian restaurant. Opened by Albert and Josephine Barone at 2206 N. Saginaw Street, it was a favorite spot for Buick office workers who came to enjoy authentic pasta dinners.

Although Italia Gardens is one of Flint’s oldest operating restaurants, its history includes a number of moves. When Barone retired in 1964, his daughter Enza and son-in-law Don Haley assumed the business and relocated to Detroit Street. In 1976, the Haleys moved the restaurant to a building Downtown near the Durant Hotel, and then again to the corner of Court and Grand Traverse Streets in 1985 when Don passed away. His son, also named Don, is the current owner, and in 1998, the third generation moved the eatery to their current building at Miller Road and I-75.

Don’s mother Enza continues to work at the restaurant a couple of days of week. She assists with food preparation and still makes one of Italia Gardens’ original dishes, Spitini. “She sits and makes it by hand,” Don said with a smile. Spitini – thinly sliced steak, breaded and pan fried, served on a skewer with onions and a bay leaf – was created by founder Albert Barone in 1931. “Italia Gardens is all about delivering the same meals you were raised on,” says Don. Every batch of pasta sauce is made from scratch, the best-known being the signature sweet tomato sauce. “That recipe is well over 100 years old,” boasts Don.

What are the dishes most favored by Italia Gardens customers? “Without a doubt, the spaghetti,” says Don, adding that the bread served with all pasta meals is handmade every day on the premises. Lasagna also tops the list of favorites. The full menu also includes mouth-watering, fall-off-the-bone, St.-Louis-Style barbecued ribs, which are another favorite.

It’s all about family at Italia Gardens. The restaurant is closed on all holidays and that policy will never change, says Don. It is important that his staff has those days off to be with their families. Many of the staff are considered family themselves and have been employed there for years. Ora Handley has worked with the family since 1962 and helps Enza make the Spitini, and Kathy Escue has been a server since 1972. “The family has been wonderful to work for,” Kathy says, “and I love Enza. She’s the sweetest lady. Don’s dad was a great, great guy; so kindhearted.” And after all these years, Kathy hasn’t tired of the food she serves. “I love the sauce!” she exclaimed. Lisa Bone has been an Italia Gardens employee for two decades, and her mother Sheila Harris worked there for many years, as well. “It’s so family oriented,” says Lisa. “I like what I do. You couldn’t find a better family to work for.”

Over the years, Italia Gardens has made an effort to keep up with the needs of its customers. Catering to the many working moms out there, Don has turned the “restaurant table” into the “kitchen table” with his popular take-out meals. Starting at a very affordable $15, the family dinners serve four to five people and include a pasta dish, salad and homemade bread. Gluten-free pasta is also available, and for those who prefer healthier fare, Italia Gardens offers “A Lighter Side of Italy” menu of five entrees with fewer than 500 calories. Italia Gardens serves beer and wine to complement the Italian cuisine, as well as a number of sweet endings, including homemade cannoli. With other delightful menu items such Shrimp Tetrazzini, Grilled Salmon, Classic Chicken Parmesan and Aunt Nina’s Chicken Soup, it’s no wonder the restaurant has a strong and loyal customer base.

Even after all this time, Don says that the restaurant is not stagnant. “We’re still evolving,” he laughed. “It’s nice to embrace the history but you have to look to the future, too.”

The fourth generation has recently joined in the tradition and become involved with the family business. Don’s 14-year-old daughter buses tables, and he has two nephews who work at Italia Gardens’ Davison location.

This is the time of year when area residents are out and about in search of the perfect holiday gifts for their loved ones. Take a break from the cold and stop by Italia Gardens for lunch or dinner. You can be sure a heaping plate of pasta will be waiting for you – and perhaps a glass of Chianti to toast the season!

Are you interested in purchasing photos from this story? Go HERE and select the “Italia Gardens” category.