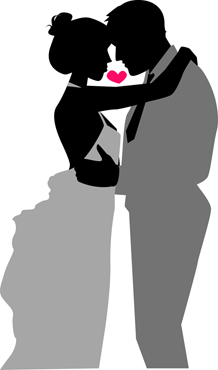 I have recently learned something life-changing: I love marrying people! Between last October and this July, I married ten people. Oh, I guess that sounds bad. Clarification: I did not get married to ten people, I performed five weddings. Yes, I am a legal officiant. It all happened quite accidentally. I was reading an article about Tori Spelling (don’t judge), who had a reality show with her husband (to whom I think she is still married but I haven’t read a tabloid in a while). In the show, they owned a bed and breakfast and Tori performed wedding ceremonies. She went on and on about how easily she became an ordained minister.

This can’t be true, I thought. “Donna Martin” from 90210 is a minister? I began to ponder whether the end of days was nigh. It turns out, through the magic of the Internet, becoming an ordained minister is quite simple. No one knows this better than I, considering that I logged onto the Internet, entered my personal information, and after a few moments, a message popped up addressing me as Reverend Leslie Toldo.

I did some checking with the State of Michigan, and I am indeed legally allowed to perform wedding ceremonies. By no means am I comparing myself to the many fine members of the clergy who have attended seminary. In fact, I never really thought I would do an actual ceremony until I was asked to perform the marriage of Lacey and Harley. Okay, so they were dogs, and it was a fundraiser for the Humane Society of Genesee County; but I loved it nonetheless. In fact, later that day, I married my husband’s friends (humans). Something about being part of that moment touched my heart deeply.

Then, last fall, a sweet couple I had known for a few years requested my services, and then another, and then another. With each wedding, my joy seemed to multiply. This summer, I married a former co-worker and her fella. She was like a little sister to me, so it was such a beautiful experience.

Then, I was asked to marry a couple I knew only through our interactions on Facebook. This beautiful bride was fighting cancer, and all she wanted was to marry her true love. The day was beautiful, one that no one in attendance will ever forget.

A week later, I married a couple who met over chemical-filled beakers in one of their college lab courses. Their wedding was also a goodbye party, because they were moving to Alaska. That day was bittersweet and wonderful, and so full of love.

With all of the negative things said about marriage and the divorce rate, I can tell you that I still believe in true love. In fact, I believe in it more than ever. Each love story is different, although none of them are simple. There is struggle, laughter and changes, which help grow the sweet day on which two people tie the knot into a lifetime of love. ♥

Leslie Toldo has reported on healthcare and medical issues on Michigan TV sets for nearly 20 years. She grew up in Baton Rouge, LA and graduated from the University of Wyoming with a Communications degree. An avid runner, Leslie is also a member of the Board of Directors at the Humane Society of Genesee County. She lives in Linden with her husband and three big dogs: Daisy, Bear and Gus. www.leslietoldo.com