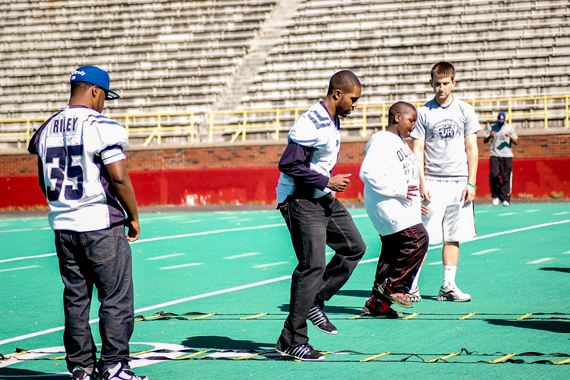 Over 50 children gathered at Atwood Stadium early on the morning of May 25, 2013 for a day of football training. Members of the Flint Fury, a local semi-pro football team, hosted the camp. In the morning, they put the kids through drills that focused on fitness and coordination. The team provided hotdogs, chips and drinks for lunch, and in the afternoon, the children received individual football position practices. The camp, which offered football training for boys and cheerleading practice for girls, was free and open to children of all ages.

This season marks a decade of play for the Flint Fury. Coach Charles Lawler says that far from being a chore, his players look forward to the camp as a treat because it gives them a chance to get involved with their community. “We had a great time coaching the kids, who all play their hearts out,” he said. The Flint Fury had a game later that day at Atwood, and Lawler says that the camp boosted attendance.