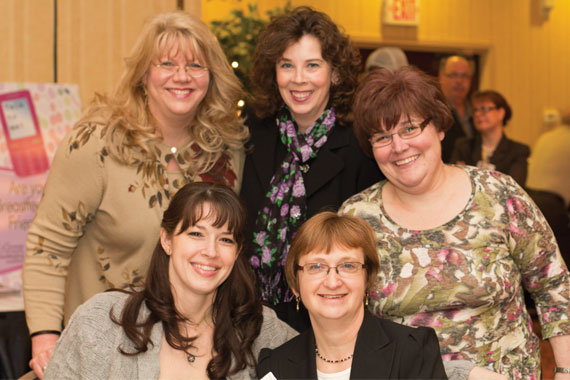 Hurley Children’s Miracle Network Hospitals hosted its Fourth Annual Miracle Dinner on April 17, 2013 at Flint’s Holiday Inn Gateway Centre. Every year, a different division of the hospital is chosen to receive the proceeds raised at the Miracle Dinner. The funds from this year’s benefit were donated to the Hurley Breastfeeding Support Clinic, a division established in September 2012 to educate and assist mothers as they nurture their babies with their own milk.

Mary Less, an RN and International Board Certified Lactation Consultant at the clinic, provides education and support to new mothers and babies as they learn how to breastfeed. “Women think it’s supposed to be natural and instinctive, but it’s really not,” she said. Many women do not know the first thing about breastfeeding, Less explains, and she laments, “There is no support for women once they are discharged from the hospital, so many new moms give up if they are struggling.” The Breastfeeding Support Clinic at Hurley was initiated in response to this unfortunate statistic, in hopes of changing the fates of moms and babies by beginning breastfeeding education during pregnancy, training women during their hospital stay, and supporting them after they go home.

Mary became interested in breastfeeding as an RN, recalling, “As a nurse, before the clinic began, I remember how new moms had more questions about breastfeeding than any other topic.” Less began educating herself, and became an International Board Certified Lactation Consultant in order to help new moms in her own capacity. When Hurley announced their plans for the new clinic, Mary knew she wanted to be a part of its work, because the clinic’s objective matched her personal goals.

The benefits of breastfeeding to babies, mothers and families are numerous and well documented, extending from health and psychology to economics and environment. In the Surgeon General’s Call to Action regarding breastfeeding, statistics show that babies and mothers who engage in breastfeeding are far healthier than those who do not. The Call to Action states, “Breast milk is uniquely suited to the human infant’s nutritional needs, and is a live substance with unparalleled immunological and anti-inflammatory properties that protect against a host of illnesses and diseases for both mothers and children.” Compared to formula, breastfeeding is also cost-effective, and it provides an opportunity for mother and baby to bond without producing any waste.

Even with a mountain of evidence on the side of exclusive breastfeeding for six months, two thirds of women in the U.S. are not following these guidelines, which experts have attributed to a lack of education, awareness and support in healthcare and societal settings. The Breastfeeding Support Clinic is Hurley’s answer to the call to action, and they believe in advocating for breastfeeding as early as possible. “People need to know,” Mary Less said. “Many nurses and doctors present bottle-feeding and breastfeeding as equivalent options, but that is simply not true. Mothers need to be able to make informed choices.” As for support, Renay Gagleard, the Women and Children’s Service Line Administrator, says that moms need affirmation and a listening ear: “Moms need to hear that their babies are doing well and speak with someone who understands their needs.”

Renay says that the Miracle Dinner helped the Breastfeeding Support Clinic procure valuable funding and get the word out about their work. “Turnout was great!” she exclaimed, stating, “We had 140 wonderful people support the breastfeeding clinic.” She says the proceeds from the Miracle Dinner will help the staff as they continue in their education program, and hints that the funds will also be useful in the near future as the clinic establishes a shop where women can buy the lactation products they need.

Hurley’s Breastfeeding Support Clinic is located in Hurley Children’s Clinic at Mott Children’s Health Center, One Tuuri Place, Flint. Those wishing to make an appointment are encouraged to call 810.262.9773, or call 810.262.9480 to speak to a lactation consultant like Mary Less.