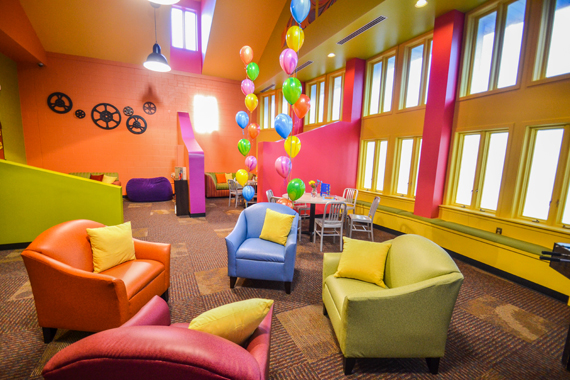 When walking into Whaley Children’s Center, the first thing one sees is the artwork that hangs above a stately fireplace in the foyer – a black and white photograph of a solemn young boy. Bookcases are filled with children’s books and boxes of toys sit in the corner. The boy in the photograph is Donald Whaley, who was just 11 years old when he passed away in 1888. Upon going through his belongings, Donald’s parents discovered a jar of coins, which Donald had been saving to send to a children’s orphanage in Detroit. This beautiful display of generosity on the part of his son inspired Donald’s father, Robert J. Whaley, to open a home for troubled children.

Whaley Children’s Center was built in 1926 under the leadership of Charles Stewart Mott, who was also the first president of the Whaley Foundation. Eighty-eight years later, the Center is still a haven for fragile children who have been abused or neglected, said Katrina Khouri, Development Director. “They have been through so much when they get here,” she added quietly.

Timmy (names have been changed for privacy) is one of those children. The 11-year-old boy, who lived at Whaley for 22 months, had been in 11 foster homes prior to his court-appointed stay at the Center. Having endured sexual abuse for much of his life, he was very angry when he first arrived. “He had to overcome his past to understand what it truly means to be loved,” said Katrina. In a desperate cry for attention, he once ran away from the Center on a bitter winter’s night. When he was found in the park, Katrina didn’t say anything to him; she just held his hand until he felt safe. Today, Timmy is in the process of being adopted. He even invited Katrina to attend his going away party. “Timmy is proof that Whaley has success stories to tell,” Katrina said.

Whaley is home to 48 children between the ages of five and 17, all with previously unsuccessful experiences in the foster care system. Kevin Roach, CEO/President of Whaley Children’s Center, gave a tour to My City Magazine in the days approaching the Center’s biggest fundraiser, the Tux & Tennies Gala. Kevin says the average stay at Whaley is about 18 months, and he makes a concerted effort to get to know the children during their time there. His success in that effort was evident when during the tour, one of the kids came up and gave him a hug. It doesn’t always begin that way, Kevin said. “They sometimes break windows when they get here, or charge at me with chairs; all because they are so angry about the cards they’ve been dealt.”

The children attend school on the premises. A philosophy called the Circle of Courage is used in the teaching process, which states that children’s needs must be met and developed in four critical areas: belonging, mastery, generosity and independence. “If these kids can grasp these four tenets, they can overcome anything they have experienced in their short lives,” said Kevin.

Twenty-four Whaley children live in the Mott Residence, a residential facility on the main campus that has brightly painted walls with colorful murals of a mermaid and a tire swing in a wooded area. “The institutional beige is long gone,” said Kevin. The residence is divided into cottages, each with a common area and a kitchen where meals are prepared. Every child has their own bedroom. The cottages are still in need of renovation but there are plans in the works to refurbish and repaint them. The Family Game Room on the main campus was renovated in February of this year. Painted in vibrant primary colors, the room houses a library, game center, snack bar, foosball table, computer station and entertainment area equipped with game consoles and DVD players. “The kids really love this room,” said Kevin, “because this is a place where they can just be kids and have fun.”

In addition to the main residence, 18 children live at four Whaley foster homes nearby and attend school in those houses’ districts: the Kiwanis, Rotary, Optimists, and Zonta group homes. In each home, youth specialists care for six children. A child can be admitted directly, or be moved from the Mott Residence into a group home when he or she is able to function in a less structured setting. The children’s ages range from five to 17 years old. Two of the homes are specialized; the Kiwanis house is a pre-adolescent boys program and the Zonta house is a pre-adolescent program specifically for girls.

The Center depends on fundraising to cover its operational costs, and there are three major annual efforts which raise about $1 million. The events include the George Blaha Golf Classic, The World’s Greatest Office Party during the Christmas season, and the recent Tux & Tennies Gala, at which $140,000 was raised.

Whaley has about 100 employees, and the ratio of staff to kids is three to one. Whaley depends on the help of its many valued volunteers, as well. Approximately 75 people offer their time in many ways, including mentoring, organizing donated items, and helping to maintain the facilities. There are also 22 mentors under the leadership of Dr. Walter Barkey, who each spend two hours a week with the kids. Mentors often take the kids on outings, including dinner or bowling, said Katrina; but more importantly, they have the opportunity to be a role model and change the direction of a troubled child’s life. There are also volunteers who tutor the kids. “We’re looking to grow our volunteer program, and there are opportunities for everyone,” Katrina said. “The work the volunteers do is incredible. The love they provide is truly transforming for these children.”

Under Kevin’s leadership, Whaley Children’s Center has undergone many improvements. He has restructured its residential and clinical departments and implemented evidence-based practices for traumatized children, thereby increasing the Center’s ability to respond to their needs with compassion. An aggressive and wide-ranging strategic plan has also been implemented, with goals for the Center’s future. Kevin says he is proud of what has been accomplished. “When they get here, many of the kids barely speak and are afraid to shake your hand. They are then transformed into kids who like to give High Fives,” Kevin smiled. “We’re experts at helping children to feel proud and look forward to the future. We take them away from a life of pain, and it’s humbling to be a part of that.”