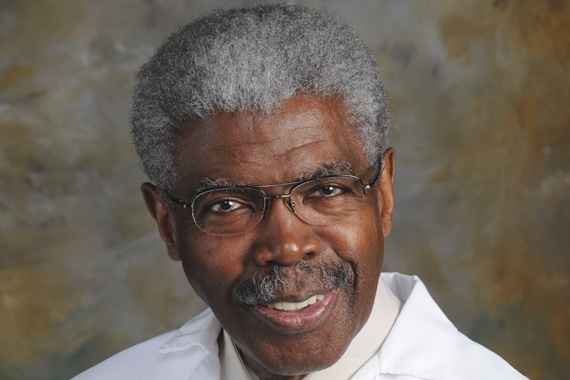 On October 17, several dozen of  the area’s leaders in healthcare, education and business gathered at the IMA Brookwood Golf and Banquet Center to honor the life and career of Dr. Samuel Dismond. Dr. Dismond’s career in medicine as a family physician spanned 50 years and included work at Hurley Hospital and the former St. Joseph’s Hospital of Flint. The nature of his practice and his extended tenure granted him the opportunity to guide many people in Genesee County through the various stages of their lives. As an obstetrics doctor who delivered 1,000 babies in our community, his hands were the first to hold many of us, and through his work in geriatrics, his were the final hands to care for our beloved elderly. Dr. Dismond thoroughly knows Flint as a people.

So, on a rainy Thursday in October, people of all ages and backgrounds filled a quaint banquet room to honor the man who has honored Flint with his life and career. The program included inspiring songs and speeches by his wife Janice and members of the Dismond family, an invocation from Father Thomas Firestone of St. John Vianney in respect to the doctor’s lifelong commitment to the Catholic Church, and the presentation of the Community Salute plaque from the IMA Recreation Association. The pleasant evening was supported by 20 community sponsors.

The week following his community salute dinner, I was privileged to have audience with Dr. Dismond. By virtue of his keen intellect and advanced years, he is a wealth of knowledge, and when I’m afforded the opportunity to sit with someone as esteemed and accomplished as a man like Dr. Dismond, I cannot help but ask questions that not only pertain to public interest, but also questions of a personal interest. Allow me to further explain my motivations.

Throughout my childhood, the phrase that my mother faithfully repeated to me and my siblings was, “Get your education. It’s the only thing that no one can take from you.” Education has always been at the fore of my endeavors and at the core of my being. I had a sense that I was able to ask the doctor questions of a more intimate nature; more than the staple journalistic approach that includes the generic, “Where are you from and what do you do?” Now, I must inform the reader of a running gag that occurred at the community salute.

Apparently, it was the habit of Dr. Dismond to sustain a “long pause” when conversing with someone who said something that was not especially wise. This was mentioned by several presenters – including one of his seven children – to the delight of a crowd filled with people who could personally testify to experiencing this particular response from the doctor. With this in mind, I was prepared to possibly be delivered an extended pause at any time in our conversation; but, as luck would have it, I was spared such shame. My questions were answered forthwith and with unparalleled wisdom.

I asked Dr. Dismond how he felt about education in the black community. “When it comes to medicine,” he replied, “I’m just a little bit discouraged.” He told me about what Howard University was like when he was a student. A historically black college, Howard “was never fully black,” says Dismond. There were many white physicians in his class, many of whom were Jewish, but speaking of today’s medical students, Dismond says, “There’s been a big change in medical college admission. Now, there are mostly women, and not so many American born physicians. We get the very best doctors, but I’m still looking for more African American physicians, and I don’t see it improving much.” I will admit to the reader that this hit home for me, for I was a biology student and pre-med aspirant before deciding to pursue liberal arts. I thoroughly enjoy writing, but I still have a mind and heart for human biology, healthcare and science. I felt that I let the doctor down in retreating to my likewise first love of the arts.

Dr. Dismond indeed praises the advances that women and additional minority people groups have made in medicine, and also praises the successes of blacks in “computer graphics, acting and law.” What he enjoys most is the “opening of doors across the county,” noting that when he became a resident in the early 1960s, segregation laws barred him from practicing in the great majority of hospitals of his day. Of this prohibition, the doctor says that he believes “wholeheartedly in the dream of Dr. Martin Luther King,” as a means to rid ourselves of inequalities of any kind.

When I asked what he felt would be his suggestion to Flint youth, he swiftly responded, “You had better read! Take advantage of what’s out there.” This naturally brought me back to my childhood, sitting on the stairs listening to my mother’s lecture each time my grades slipped to a “B”. (Yes, a “B”, people!) But, I thank her today for her incessant extemporaneous motivational speeches.

I will brazenly boast before the reader that Dr. Dismond and I discussed additional matters in detail, but I will not trouble you with those details – they’ll stay with me. I will share his response when asked what he loves about Flint and why he believes so much in the people of Flint. I pray his words awaken the overcomer within each of us as we work together toward a better tomorrow as a community.