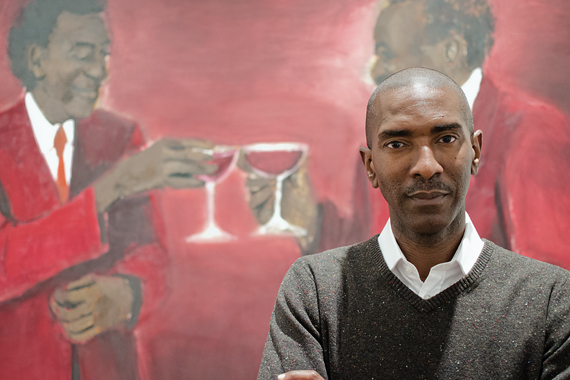 A new exhibit opened last month at the FIA that promises to challenge viewers with its honest and outspoken art. Point of View: Contemporary African American Art from the Elliot and Kimberly Perry Collection is a compilation of paintings, photography, collage, sculpture, prints and video from some of the world’s most well-known, and unknown black artists.

Former NBA player Elliot Perry, says that he never imagined becoming an art collector. “I’d never set foot in an art museum at the time I joined the NBA,” he recalled during a private tour of the exhibit with Director John Henry and My City Magazine. He went on, “My good friend and fellow player, Darrell Walker, got me interested. On a flight to Japan, he talked to me about art and encouraged me to look into it. After that, in every city I stayed for a basketball game, Darrell told me which art museums to visit while I was there.” About a year later, Perry remembers, he bought his first piece: a print. “I had no idea what I was doing,” said the originals-only collector, looking back with a chuckle. At first, Perry collected time-honored works of notable African American artists such as Romare Bearden and Jacob Lawrence, but it wasn’t too long before he considered doing a “180,” as he now refers to his decision to amass the works of contemporary artists. “I developed a new method, one in which I support living artists,” said Perry, who claims that the benefit of working with these artists is multi-faceted. “I have the opportunity to develop relationships with them, to encourage them to continue producing works that both capture and speak to our time, and to collect, preserve, and appreciate these pieces myself.”

Every work in the Perry collection is hand selected by Elliot. “I go with my instincts,” he said feelingly, “and the collection is really more a labor of love than anything else. I look at it as an expression of my passions and never consider adding works for academic reasons.” FIA Director, John Henry, says that Perry’s method makes him an astute collector: “His gut has led him to take chances, and that in turn has made him into both a collector and a critic,” he explained. “Today, it’s something of note for an African American artist to have one of their pieces in the Perry collection.”

Today, Perry says he is interested in emerging and mid-career African American artists, whose compositions run the gamut of media, theme and composition. While the assemblage en masse points to the thoughts and feelings of the collector, acting almost as a thumb print for Perry’s unique artistic vision, each piece also stands alone, as a testament to itself, beyond even the artist’s intentions during creation. “I want the collection to inspire a range of emotions in the viewer,” Perry states as his hope for the collection. It seems that a range of emotions could scarcely be avoided when walking through the exhibit. The works are challenging: puzzling, bizarre, and at times brutally honest. They bring into the open topics that we as a society often seek to hide, avoid or forget: gender stereotypes, sexuality and racism. The results are controversial, just as the pieces themselves are controversial. “My own mother,” said Perry with a laugh, “has mixed reactions to the art. Sometimes she loves a piece, and other times she tells me I’m just throwing money away.”

As individuals gaze at the works, each piece cries out to be reflected upon: “Great art will change you, change the way you see and feel about the world,” says Perry, who defines the mission of his collection as broadening the scope and conversation about African American art. Yet while all of the artwork was created by artists with black heritage, it is important not to use the same approach for interpreting each piece. On the contrary, when you visit the exhibit, recognize that each is unique: it speaks with a voice entirely its own, and it exists for the purpose of opening a dialogue with the viewer, deconstructing preconceptions, and introducing new lenses with which to view the world. The art in this collection requires the viewer to tear down dearly-held beliefs that are often used as a wall to keep out ideas. Remember too that it is not necessary to like a piece in order to appreciate it. “Beyond what I see, beyond what the artist desires, it’s more important what the audience takes away from the art,” Perry said fervently, “Hence the exhibition’s title: Point of View.”

While approximately 40 percent of Perry’s collection resides in his home, the remaining 60 percent is currently split between the FIA and the Charles H. Wright Museum of African American History in Detroit. Purchase of one ticket is valid for both exhibits.

See more photos HERE, or purchase photos from this story by going HERE and selecting the “Perry Art Collection” category.