In classic mythology, a hero was “a warrior-chieftain of special strength, courage or ability,” a demigod whose deeds stood above those of mere mortals. Modernity sees heroes as comic-book figures, with powers or freakish gifts used to save the world. But are heroes relegated only to stories? Are we, the common man, doomed to an ordinary existence, following the crowd and staying safe in the middle ground?

Matt Langdon and Adam Hartley say “No.” After working at Camp Copneconic for 12 years, Langdon, an Australian-born Genesee County transplant, founded the Hero Construction Company in 2006.“I started the HCC after seeing how eager children are to engage with new ideas and test them out. My big idea was to show kids that they are the hero of their own story, the same as the heroes they see in movies and books.”

Adam Hartley, a lifelong resident of Genesee County, joined Matt in his venture, and together, they have been spreading the hero movement. This year marks the second Hero Round Table, a two-day conference for encouraging heroism in our everyday lives, held at The Whiting on September 19 and 20. The conference grew out of Langdon and Hartley’s desire to not only bring together experts on the diverse topics encompassed by heroism, but to inspire individuals to live their lives as heroes. “I kept meeting people doing great work who were unaware of all the others doing similar work. I thought that if I got them all into the same room for a weekend, great things would happen,” said Matt. Adam added, “This conference will be used to share heroic stories and the latest research, and inspire all of us to continue on this journey. Most importantly, this will be a time to identify problems, collaborate with others to solve those problems, and build a team of heroic youth within our county.” 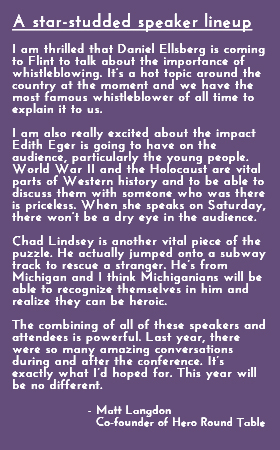 Adam believes that heroism is more than just a buzzword; it’s a need not only in Flint, but in our country as a whole. “Matt has a great definition of what a hero is,” he said, “and that is ‘the opposite of a bystander’. We need more people going against the norm, being outliers on the statistic sheets, and showing others what it means to write our own stories rather than wait for others to write them for us. If more people learn what heroism really is, and how we can all be positive deviants despite the sacrifice, then Flint will surely succeed.”
Hartley says that the conference’s location is not randomly chosen. “Matt has had plenty of opportunities to take the Hero Construction Company and go elsewhere,” he said, “but he and I both believe Flint has a heroic story of its own. We plan to keep the conference in Flint – The Whiting has been great – and we plan to make Flint the world headquarters for our Hero Construction Company.” Join the movement, become a hero, and don’t miss the Hero Round Table on September 19 and 20. ♦