Life has been good for the University of Michigan-Flint’s hockey team this winter. Cohesion on the ice and camaraderie off it have produced a hot streak in the team’s new home arena, which features rambunctious crowds, an office and locker room awash in team colors and the team’s logo at center ice.

“We have a great group of guys who are great to play hockey with and hang out with,” said Mark Look, who was tied for the team scoring lead 24 games into the season with 19 goals and 11 assists. “We’ve become a close group on the ice and know each other’s strengths.” Look’s sentiments are echoed by Cody Damon, who was part of several successful junior teams in three states. “What I love about this team is playing with a group that has so much heart and works hard together,” said Damon, who contributed 13 goals and 13 assists in his first 20 games of the season.

After beginning the season 4-4, U of M-Flint went on a tear, winning 12 of its next 16 games, including eight straight victories at one point. This 16-8 record through 24 games has already matched last season’s total of 16 wins, and has left U of M with the fourth-best record of the 26 teams in the American Collegiate Hockey Association’s North Region. In fact, they are one of the 12 best among all of the nation’s 142 Division 3 teams. Thanks to a potent, well-rounded offense, the Wolverines were outscoring opponents by an average of nearly two goals per game.

These statistics left third-year coach Mike Schunot very encouraged. “We were hampered by injuries early on and were working 11 new players into the mix, but once the team got healthy, everybody started jelling together very well and just took off,” said Schunot, who played for U of M himself while a graduate student and boasts a 62-25-2 record as coach. “At this level, it’s not just about talent, but chemistry. We’ve brought in some really talented new players, but the key has been getting that talent to work together and believe.”

The Wolverines’ success has Schunot and the team believing another playoff run is possible, similar to two years ago, when the Wolverines reached the national championship game. “There are similarities with the team from two years ago in that we have great senior leadership,” Schunot said. “Also, both teams feature players who are fierce competitors on the ice and great friends off it. That’s what turns good teams into great teams.” Among the players making this year’s team great are co-leading scorer Nathan Robson with 18 goals and 12 assists, and Andrew Lay, who had seven goals and a team-leading 18 assists. Top defensemen include standout Tim Donnelly with 16 assists, Nick Karstens and Dan Olson, while first-year goaltender Adam Bryant has allowed fewer than three goals per game in his 13 starts. 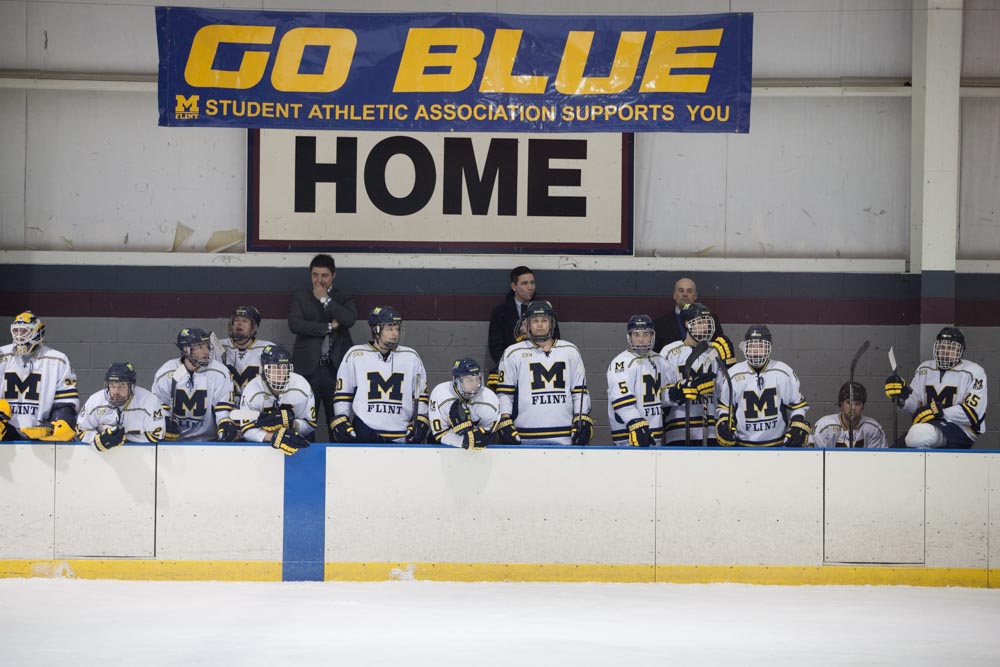 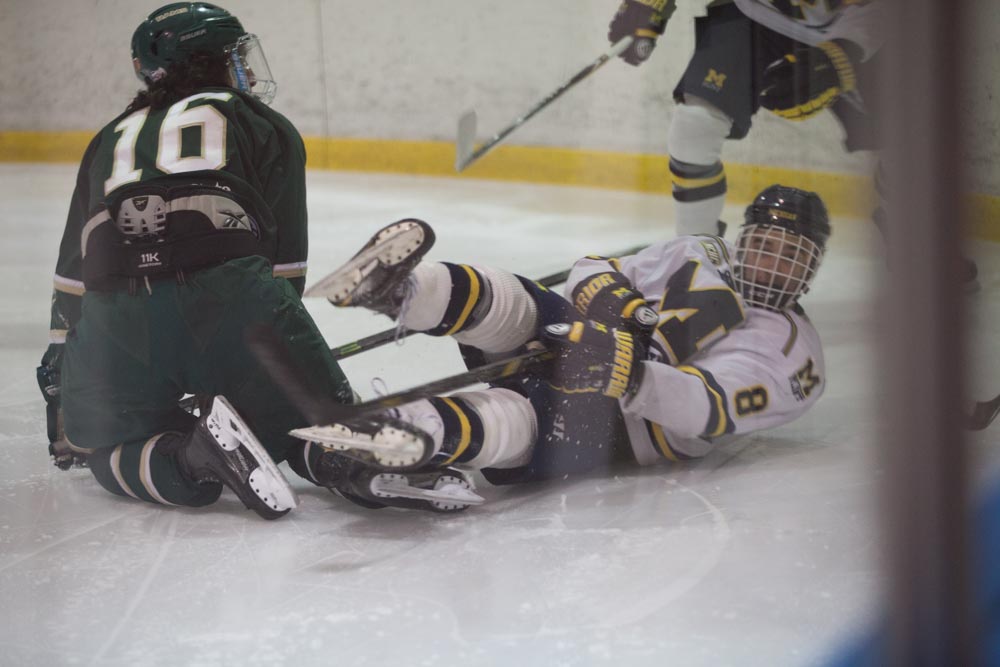 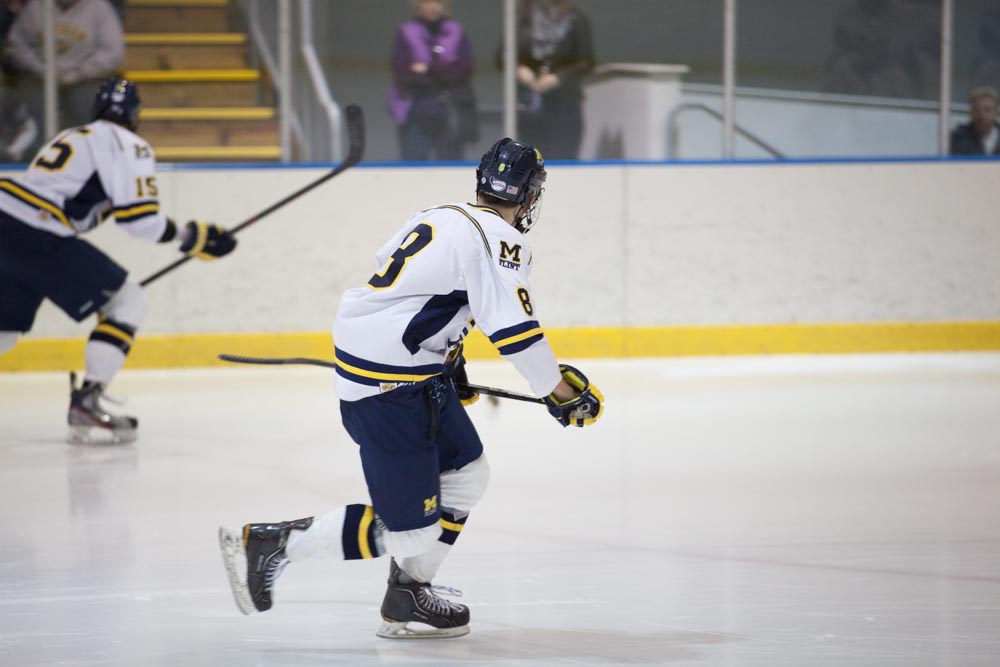 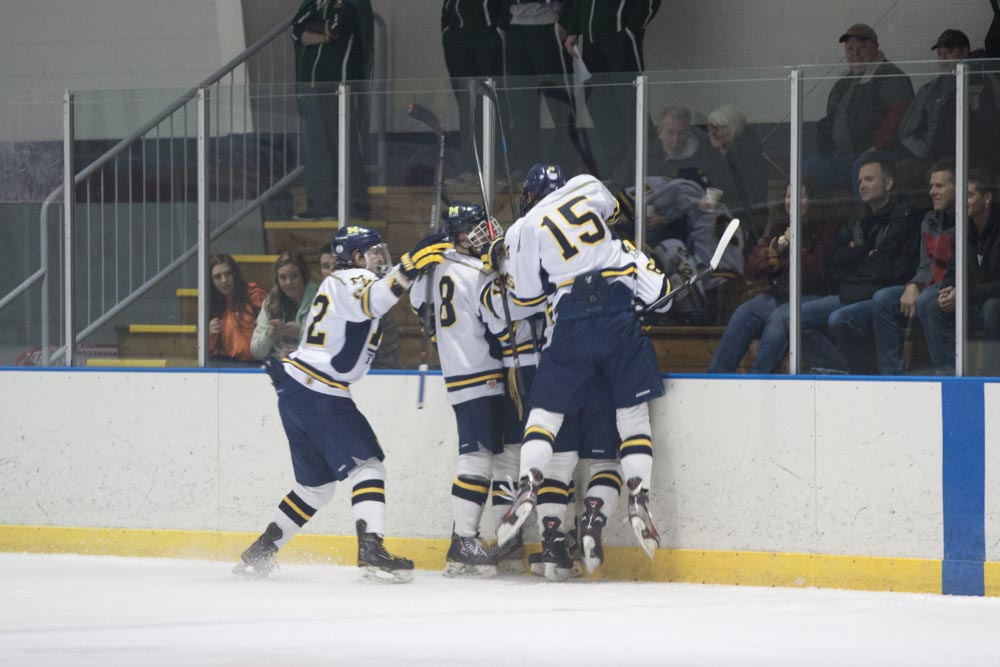 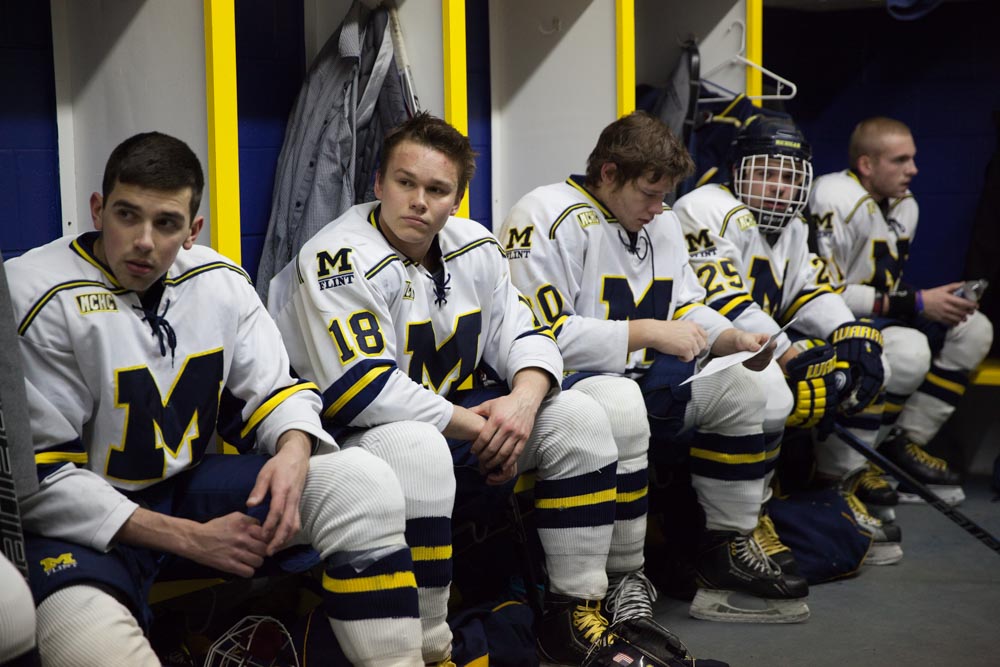 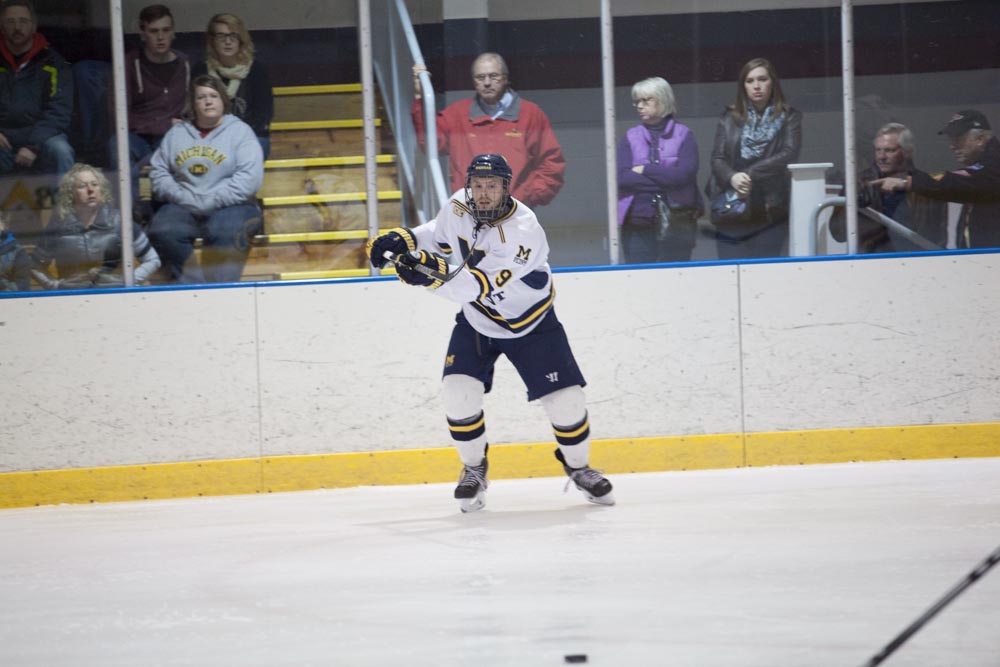 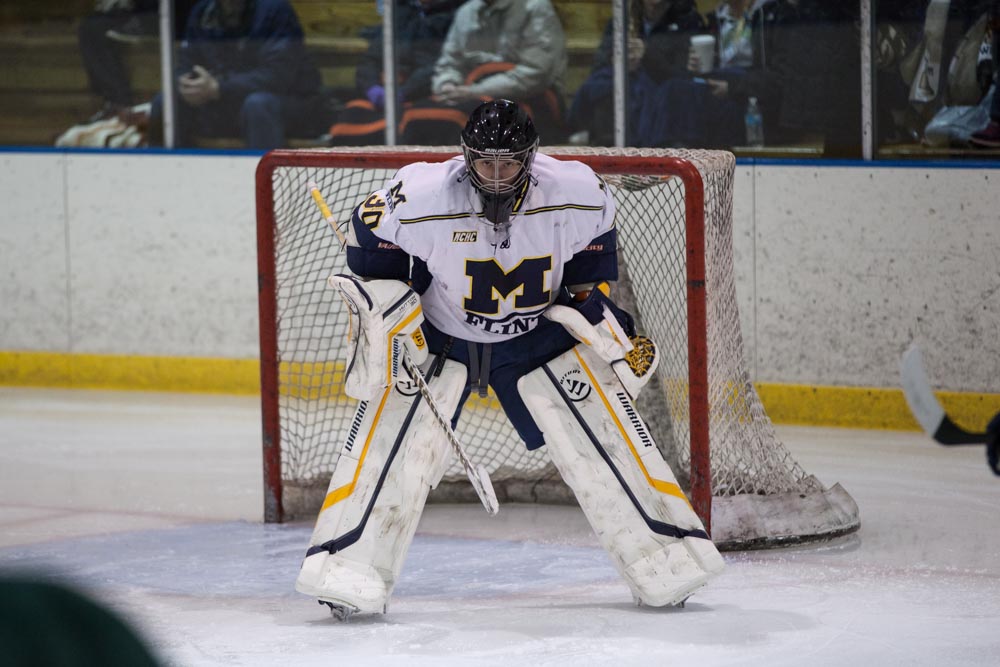 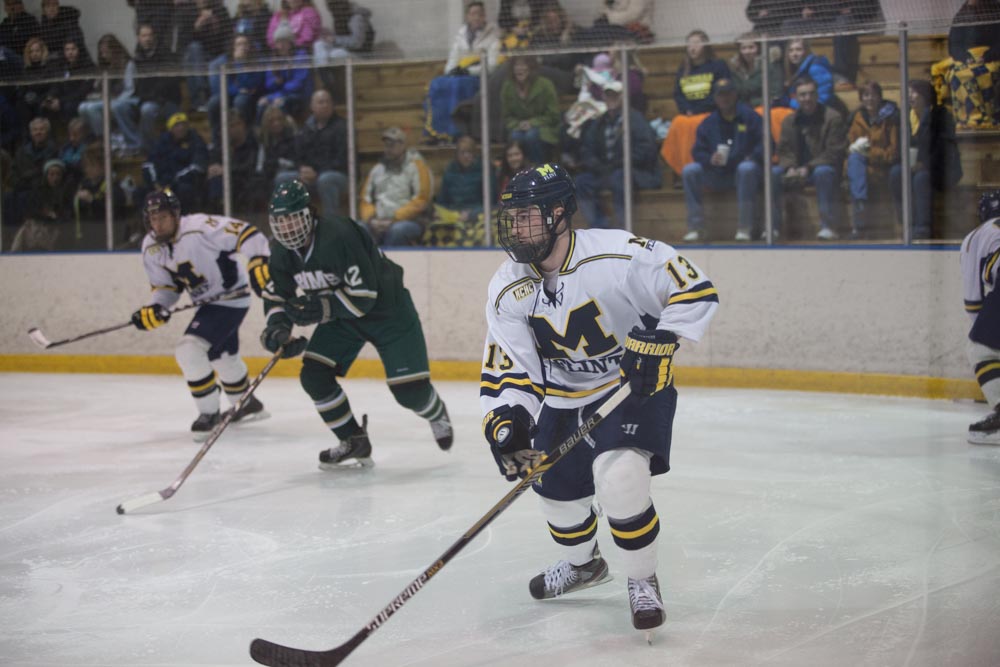 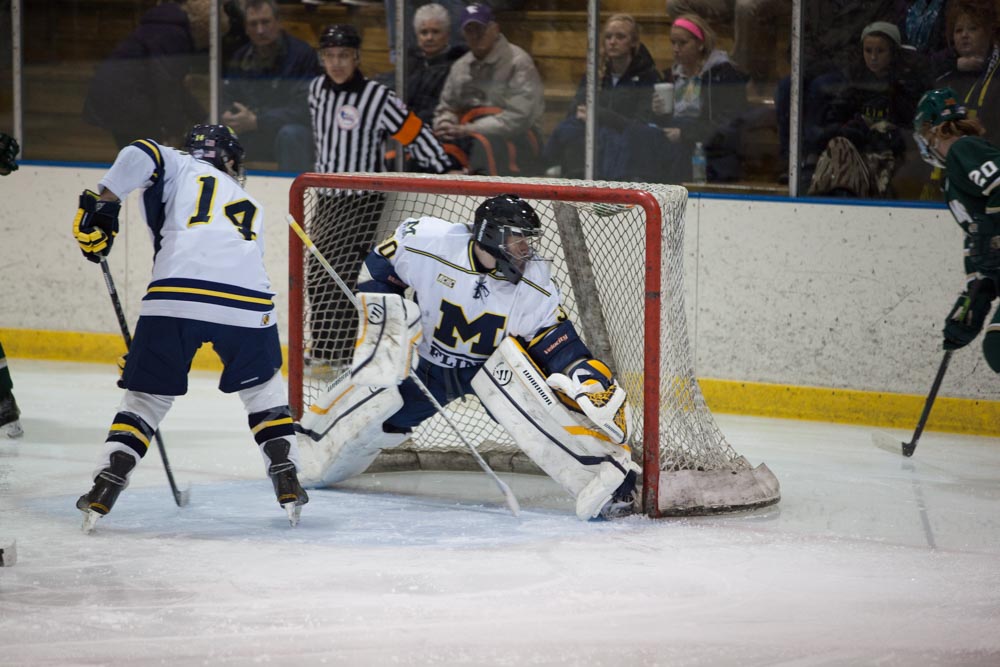 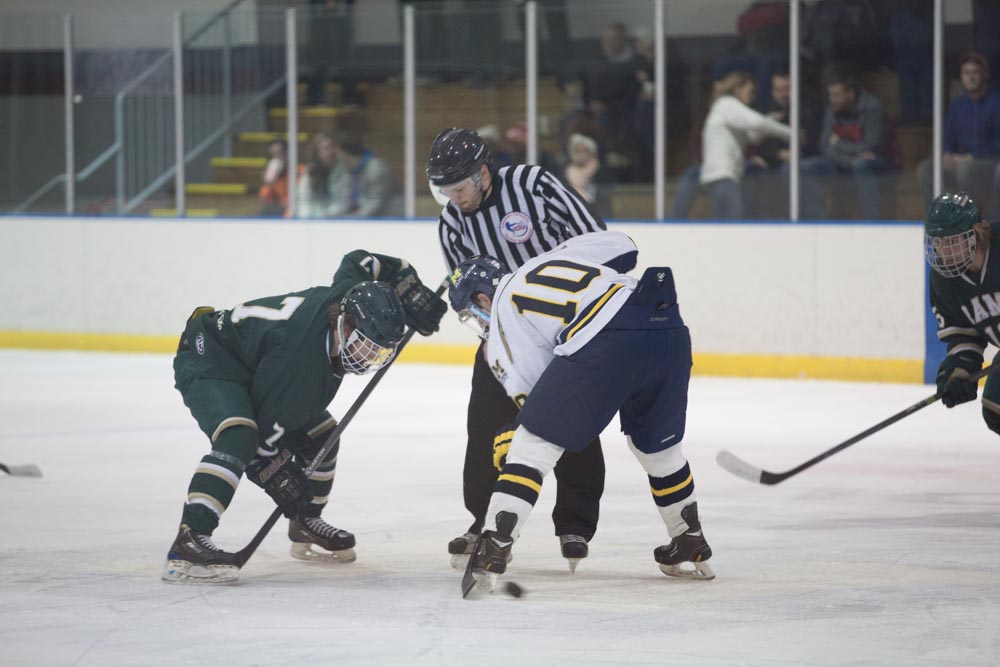 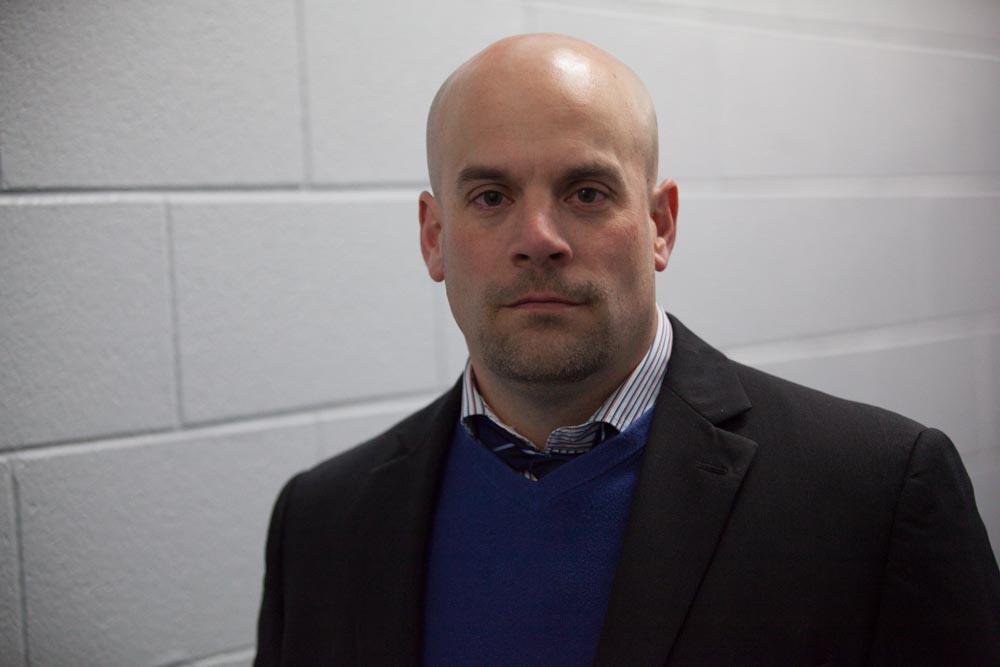 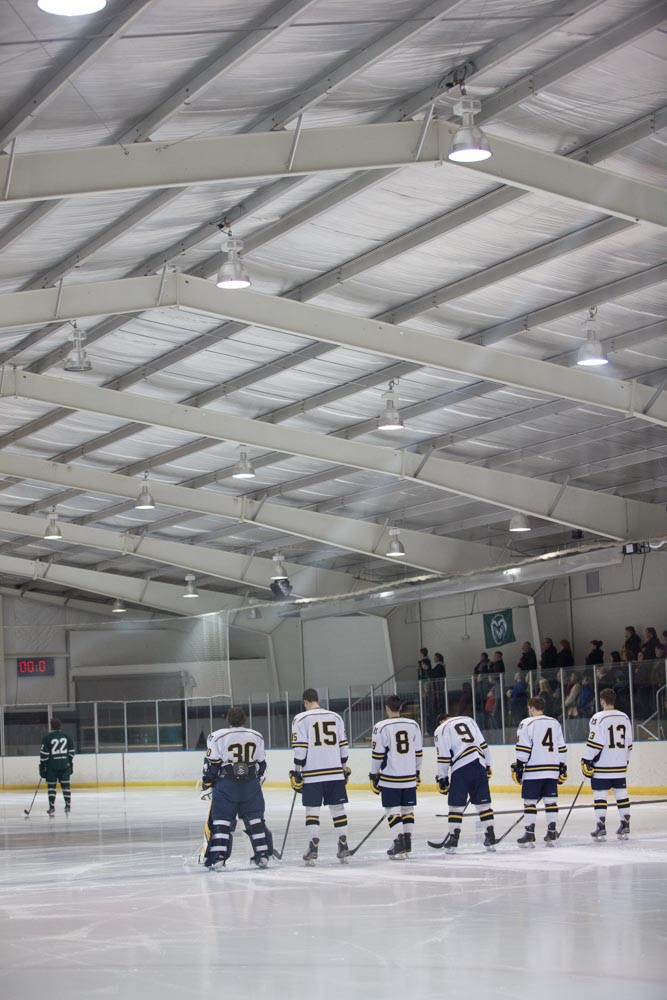 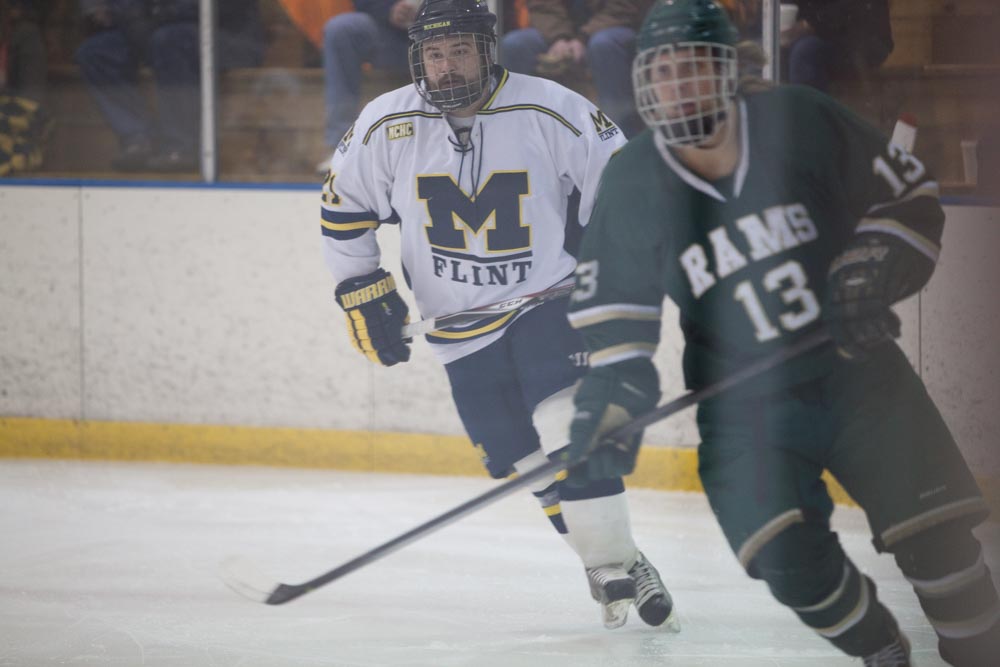 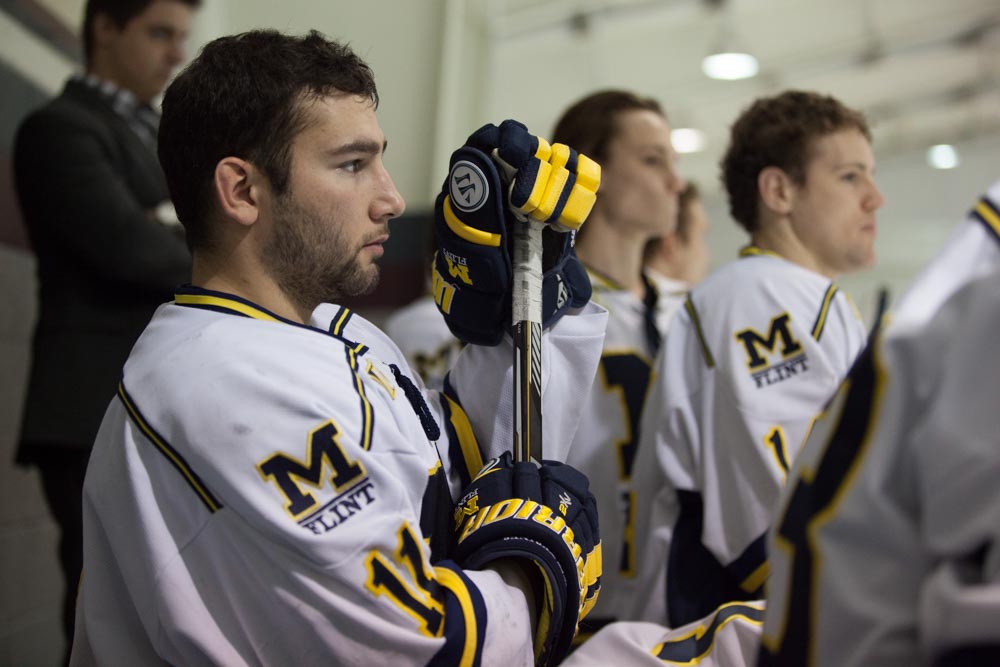 Robson is in his sixth year with the team, which was founded in 2006. Unlike regular collegiate athletes who are limited to four years with a team, those on club teams – like U of M-Flint hockey – can play as many seasons as they wish while full-time students. “We have more depth of talent than we’ve had in past years and some great young players have come in who are better than I was my first year.” Robson said. “This has been one of my most exciting seasons, and playing at Crystal Fieldhouse has made it even better.”

The team has indeed felt more than welcome at Crystal Fieldhouse. Formerly named Ice Mountain, the building sat vacant for two years before re-opening last fall. The Wolverines reached an agreement to play their home games there after splitting time between Perani and Iceland Arenas last season. “The atmosphere here is great and they set us up with nice facilities and our logo at center ice and banners hanging from the rafters,” said Schunot as he sat in the team’s spacious office, which features a block “M” on the door. “It’s really everything you could ask for, and visiting teams have offered a lot of positive feedback about the atmosphere as well.”

Perhaps the best aspect about U of M’s new home is how the crowds, which average 300-600 people, seem so close to the action in the arena’s cozy confines. “This has been a great place for our games,” Damon said. “When we score, people are jumping around, having a good time. We love it when people are that into the game: it’s fun for us.”

What is also fun for many of the players is that the team provides the perfect outlet for continuing to play organized hockey while obtaining a quality college education close to home.

“I was finishing my time with a junior team in Flint and saw that UM-Flint was looking for players, so I thought I would try it,” said Damon, who also played for Schunot while he was Grand Blanc’s coach. “Playing close to home was a draw, as was playing for my high school coach. It has worked out great for my hockey career and education.” Schunot added, “The thing I like the most is that everyone on the team is a student-athlete in every sense of the word. Many have part-time jobs and go to school full-time, but come to rink ready to practice, which stems from a real love for the sport.”

The Wolverines must finish in the top two in the final regional rankings – Schunot expected them to be in the top five when latest rankings were released – or place in the top two in the regional tournament to make the national tournament. While it’s a long road to Nationals, the team is enthusiastic and optimistic. “We have high expectations,” Damon said. “We have a strong offense and cycle the puck well. We just have to dig deep, play physical and put pucks in the net.” ♦