The Witch of November came in the night, and she was angry.

As the storm sent wave after wave breaking over the deck of the L. C. Waldo, Second Mate Feeger was desperately trying to navigate across the bouncing and heaving ship. The snow flew in the gale-force wind, blinding him to all but the brightest of lights. Small needles of ice, propelled by the monstrous wind, shot into Feeger’s exposed face and arms as he desperately made his way to the wheelhouse. Moving slowly, he gripped the metal rail that kept him and his shipmates from being tossed into the deadly black waters of Lake Superior – the only thing keeping him upright and alive. As he approached his destination, the light from the wheelhouse cut through the bitter storm. It was the one thing he could see clearly – a beacon leading him to his captain so he could deliver the news that the ship was taking on water and that they would have to find a harbor quickly or succumb to the Witch’s curse. He was looking up into the lights of the wheelhouse when a ferocious wave smashed into it, breaking out windows and sweeping the silhouette of a shipmate clear out into the malevolent depths, never to be found. Feeger gritted his teeth against the wet winds. How could they possibly make it out alive?

In November 1913, the Great Lakes were hit with a storm the likes of which none have ever seen before. Its ferocity was unmatched by any in recorded history. Dubbed “The White Hurricane” it left more than a dozen shipwrecks throughout the lakes and took over 250 lives. The White Hurricane still holds the distinction of being the largest inland maritime disaster in U.S. history. It grew so quickly and at such a time in history, that disastrous effects were inevitable.

For those stuck out on the waters of the Great Lakes, the storm of 1913 was four days of horror. It brought winds of speeds upwards of 90 mph and waves as high as 50 feet on Southern Lake Huron. Whiteout conditions and ice accumulation presented an even bigger problem – ships couldn’t navigate. Once caught in the storm, a ship’s fate was sealed unless it got lucky. Not many were lucky enough.

One fortunate ship was the L. C. Waldo, trapped on Lake Superior. Faced with 70 mph winds and a broken rudder, the ship was thrust aground on Gull Rock near Manitou Island and nearly cracked in two. It was irreparably broken. Out on the water, it had lost its pilot house and wheelsman as he was swept from the wheelhouse by a 35-foot wave. The captain knew the ship was lost and turned his attention to self-preservation. He ordered his men to wedge the ship as far as possible into the rocks using as much power as it had left, and to then take shelter in the ship’s bow. There, in the unheated windlass room, they waited out the storm’s fury. Second Mate Feeger recounted a little of that night: “The wind sent one gigantic wave after another over parts of the ship …The snow was so blinding that none of us could see 50 ft. ahead,” he stated. There was little warning as to the ferocity of the storm and what warning came had come too late.

The Great Lakes storms of November were one of the main reasons for the creation of a National Weather Service in 1869 when Rep. Halbert E. Paine of Wisconsin introduced a bill that called for a weather warning service under the Secretary of War. The service was just beginning to stand on its own two legs in 1913. The common practice was for forecasters to telegraph gale warnings to more than 100 stations along the Great Lakes shores. Volunteers would then display flags and/or lanterns as warnings to those out at sea. Sailors near land only had 12 to 24 hours in which to prepare. Those further out in the waters had no warning whatsoever. So, when ships were warned on November 7 of a “moderately severe” storm on the way indicating wind speeds of up to 55 mph, they were caught unaware when in truth, speeds topped out at 80 mph over the deepest waters. At 10am on Saturday, November 8, the storm status was upgraded to severe. Most captains ignored the warning flags if sighted. Commerce continued. It was on this night that the majority of ships were lost on Lakes Michigan and Superior. Lake Huron was next in line.

When November 9 began, gales on Lake Huron registered close to normal for November. The storm, however, was slowly approaching from the northwest just as another large storm was coming in from Lake Erie to the south. Both storms collided over Lake Huron just south of Alpena creating massive waves. At least three ships were found floating upside-down, attesting to the strength of the wind and waves. Ships on the waters of Lake Huron’s southern tip were met with 90 mph winds and relentless blowing snow. As the combined storm moved out of the area on November 10, lake effect blizzards covered Cleveland in 22 inches of snow, knocking out power and filling the streets with drifts as high as six feet.

Shipwrecks occurred on all Great Lakes with the exception of Ontario. Nineteen ships were destroyed, 19 were left stranded on the water, and 250 people perished. Over $1 million in cargo was lost to the murky depths. 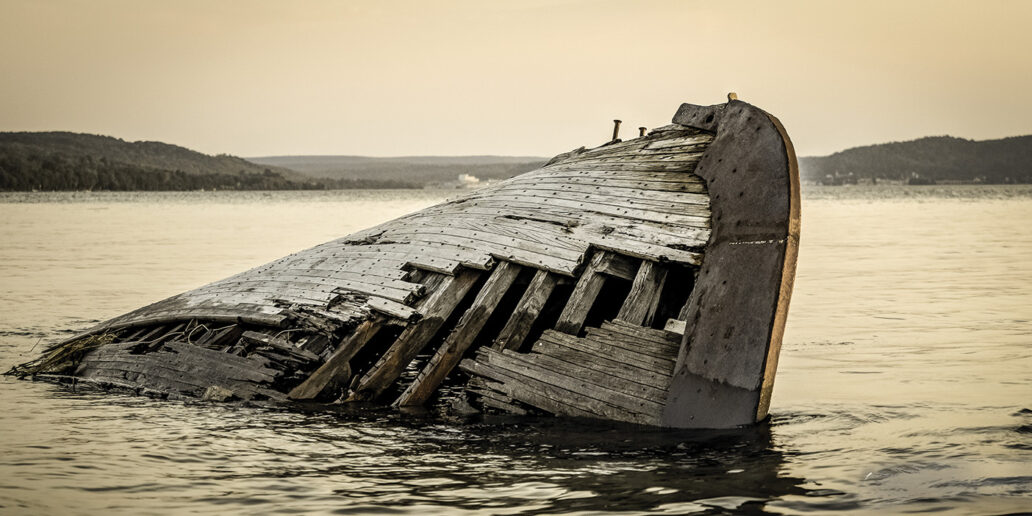 A shipwreck on the coast of Lake Superior – ehrlif / stock.adobe.com

Despite the White Hurricane tragedy, ship builders and shipping companies resisted advancements in cargo ship design for over 60 years until the tragedy of the Edmund Fitzgerald in 1975. Today, advancements in the Weather Service have led to more effective means of tracking storms and issuing warnings.

Ships lost during the White Hurricane

The majority of ships and lives were lost on Lake Huron during the third day of the storm, namely the Isaac M. Scott (28 lives), Charles S. Price (28 lives), John A. McGean (28 lives), Argus (28 lives), Hydrus (25 lives), James Carruthers (22 lives), Regina (20 lives), Wexford (20 lives) and others. The deadliest wrecks on Lake Superior were the Henry B. Smith (23 lives), and the Leafield (18 lives). Of the most notable wrecks of the storm, three vessels have yet to be located. These are the James Carruthers (Huron), Leafield (Superior) and Plymouth (Michigan).

With the advancements made in weather prediction and maritime technology, major shipwrecks on the Great Lakes have become a thing of the past. Not since the fabled wreck of the Edmund Fitzgerald on November 10, 1975 has a major freighter been lost on the waters. The Witch of November still claims victims here and there, but possibly never again on the level of the White Hurricane.