On Memorial Day, those who died in military service to the United States are honored with parades, ceremonies, 21-gun salutes and the playing of “Taps” on the bugle. American flags are placed on graves and tears are shed for those lost. In the city of Mt. Morris, there is a special ceremony for George W. Clute, a Medal of Honor recipient who is interred at the Mt. Morris Cemetery.

The Medal of Honor is the highest award for valor in action against an enemy force which can be bestowed upon an individual serving in the U.S. Armed Services. “I was shocked to find out that he was the only Medal of Honor recipient to be buried in Genesee County,” says Tim Elder, Army veteran and member of the Mt. Morris Downtown Development Authority. “As a veteran, it’s an honor to have him resting here.” 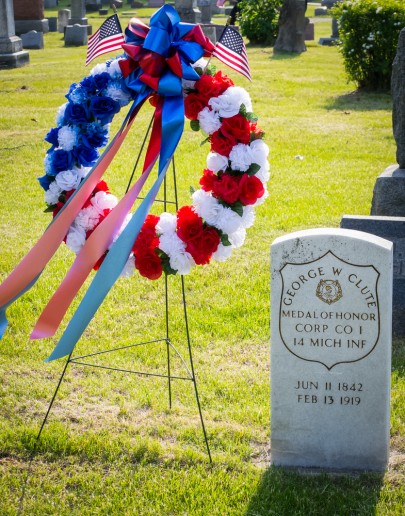 Corporal George Washington Clute fought in the Civil War. He received the Medal of Honor for his actions during the Battle of Bentonville in North Carolina on March 19, 1865. The citation reads: In a charge, captured the flag of the 40th North Carolina (Confederate States of America), the flag being taken in a personal encounter with an officer who carried and defended it.

Little is known about Clute, says Elder, who has done some research to see what he could find about the American hero. It is known that he was born in Marathon Township on June 11, 1842. He enlisted into Company 1, 14th Michigan Infantry on December 22, 1861 at the age of 19. He mustered out at Louisville, Kentucky on July 18, 1865 and then resided in Mt. Morris. Clute died in 1919. He had a son who is also buried in the Mt. Morris Cemetery.

This excerpt from Deeds of Valor: How America’s Heroes Won the Medal of Honor gives details as to what happened during the battle in Clute’s own words.

In this battle, two of Michigan’s soldiers, Corporal George W. Clute of Company I and Private Henry E. Plant of Company F, both of the 14th Michigan Infantry distinguished themselves as heroes. The regiment had been ordered to the front on a double quick and upon its arrival found the cavalry fighting the rebels in a large pine swamp. It was here that the six successive charges were made by the enemy. The last charge was an especially severe one. It came to a hand-to-hand fight. “In the midst of the struggle,” says Clute in describing it, “I saw a Confederate flag and made a rush for it. It was in the hands of their lieutenant. He and I were out of ammunition. We had a desperate fight, but I proved to be the stronger and dragged the color bearer and the flag along for over 100 feet before he let go of the staff and ran back to his lines. Carrying the captured colors aloft I ran to my company, the men of which were fighting with clubbed muskets.

When my captain caught sight of me and my trophy he said, ‘Why didn’t you kill the rebel?’ ‘Because I had no ammunitions,’ I replied. While I was still talking with the captain, our own men, whose attention was attracted by the Confederate flag which I held in a raised position, began firing at us and I was quickly ordered to drop the flag. I dragged it behind me along the ground and was just about to join my fighting comrades a few feet in front of me when I once more caught sight of the Confederate lieutenant from whom I had wrenched the colors. As his eyes fell upon me, he, as quick as a flash, took aim with his revolver and fired at me, the ball entering my right arm. Then he, with like suddenness disappeared.”

According to Elder, every year on the Saturday before Memorial Day, American flags are placed on the graves of the 150 veterans buried at the cemetery. A special wreath is placed on Clute’s grave and he is honored with a 21-gun salute. Mt. Morris also has a parade on Memorial Day, the longest running parade in Genesee County.