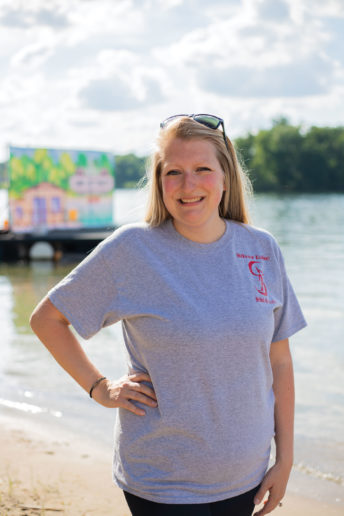 Surrounded by the most important people in her life, Whitney Pedersen stood in a room at The Barn Restaurant in Fenton, holding her one-year-old son tightly, watching and waiting. It was March 1, and months of anticipation were coming to an end for the Holly resident, who applied last fall to be the soundperson for Team USA at the 2020 Show Ski World Championships in Yarrawonga, Australia. Essentially, it is the Olympics of show water skiing, a sport the 27-year-old Pedersen has been involved in nearly her entire life. She has directed Silver Lake Ski Club shows for a decade.

The 40-member USA squad was announced one-by-one on Facebook Live. The feed was streamed through a TV at The Barn and after what seemed like an eternity, Pedersen’s face and biographical information appeared on the screen. She will represent her country “Down Under” next March. The room erupted in boisterous cheering while Pedersen, sporting a USA Water Ski sweatshirt, burst into tears. Mother Wendy was the first to reach her, embracing Pedersen and son Degan, followed by her father Eric, fiancé Terry Messenger and several others. Pedersen’s parents have long worked behind the scenes for Silver Lake Ski Club and sister, Ashley, is also an active member. 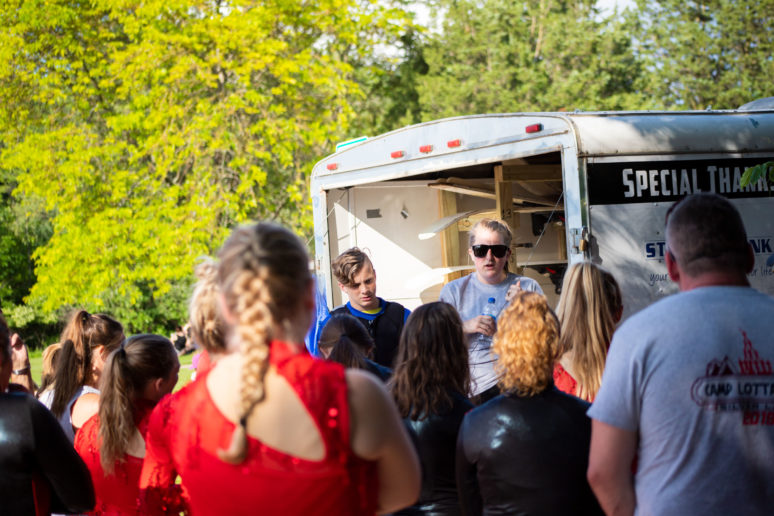 “That was an overwhelming moment and sharing it with my family and my extended family of the Silver Lake Ski Club, was very special,” Pedersen says. “I have always been so passionate about show skiing and found I could serve the sport best by show-directing, while others I grew up with went on to ski professionally around the country. I’ve now made it as far as possible in show skiing.”

Pedersen is the only Michigan resident to ever make Team USA’s roster for a Show Ski World Championship which has been held every other year since 2012. “A U.S. map was being shown during the feed and states occupied by team members were lighting up in red before their names were announced, so once Michigan lit up, we all kind of knew,” she recalls. “I had to go back and watch it again to actually hear the announcement because everybody was screaming.” 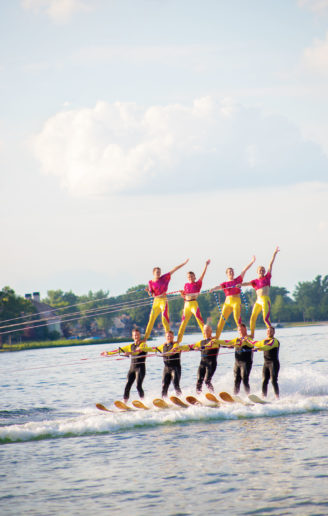 Though the World Championships have long been a dream for Pedersen, she began questioning whether now was the ideal time to pursue that dream. After all, she is caring for an infant, working full-time as a product development specialist for a mortgage firm and planning her September 2019 wedding. She hesitated until the final day of the submission window before completing her introductory video, resume and other paperwork. “In the video, I showcased all the things I can do with sound and how comfortable I am directing shows,” she says. “I also felt strongly about my references and accomplishments.” Among them are winning Best Sound Crew awards at the 2017 and 2018 Division 2 National Championships.

Count Team USA Co-Directors Matt Heilman and David Rezin among those thankful Pedersen did not withdraw her interest, selecting her from a pool of roughly 20 sound technician applicants. “Honestly, we were blown away by Whitney’s application,” Rezin says. “Her passion literally spoke to us through it. Once we got her on the phone, we knew she was somebody we needed to seriously consider. How she is kind of a one-person army running one of the larger Division 2 teams in the country is incredible.”

Pedersen is working with announcers Adam Schaller and Michael Thornton to find appropriate music for skiers to perform about 13 acts during two 60-minute shows. Finding ways to make smooth transitions between acts is also crucial, as is getting a feel for what judges consider important. “I’ve already been working with the announcers through phone conferences on most weeknights,” Pedersen says. “I’ve also been fundraising through raffles and similar means to help offset costs of the trip for the entire team.” 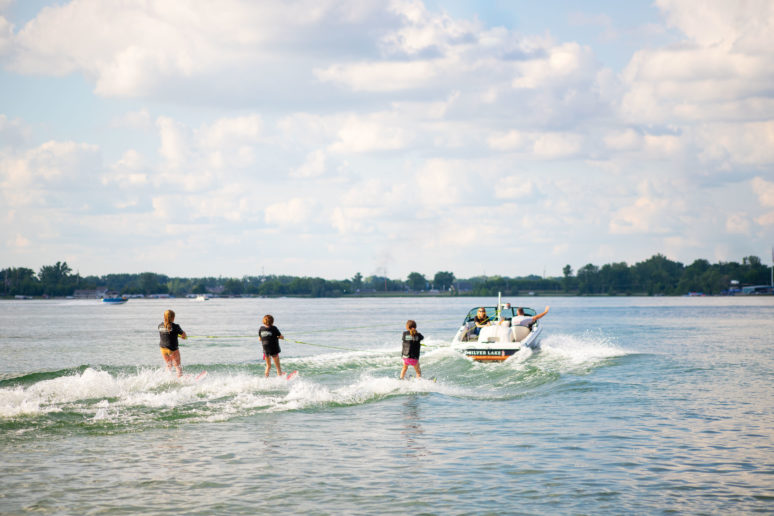 Rezin is pleased with how well Pedersen, Schaller and Thornton have collaborated. “The chemistry has been outstanding and we can’t wait to see what this trio can do as we continue to work on the theme,” he says.

Growing up south of Fenton on Lake Shannon provided Pedersen with an easy way to break into show water skiing. At the tender age of four, she joined the non-competitive Lake Shannon Ski Club. In 2008, at age 16, she was ready for competition and joined the Silver Lake Ski Club. “I knew I had to test myself in competition after going to the Division 1 Nationals as a spectator the year before,” she says. “My parents agreed, but said I had to wait until I could drive there myself.” Pedersen made an immediate impact, helping Silver Lake to a first place finish in Girls Ballet Line at the 2008 Division 2 National Ski Show, as the club placed third, overall.

At the same time, Pedersen began to feel she could contribute more to the sport out of the water rather than on it. Her passion convinced Silver Lake veterans to let her assist with organizing shows. Just three years later, a 19-year-old Pedersen co-directed a show that placed Silver Lake fourth at the 2011 Division 2 National Championships. She also co-directed the club to top-four finishes at the 2012, 2013 and 2017 National Championships, among other accomplishments. “It’s pretty unheard of for a show director to be under age 30, so I had to convince the adults to listen to a teenager’s ideas,” Pedersen says. “Fortunately, they responded to how I envisioned doing things.” Rezin and others associated with Team USA have certainly responded to her. “Whitney has been hitting us with plenty of ideas and input,” he says. “Her enthusiasm and energy are infectious. She makes us want to become better.” 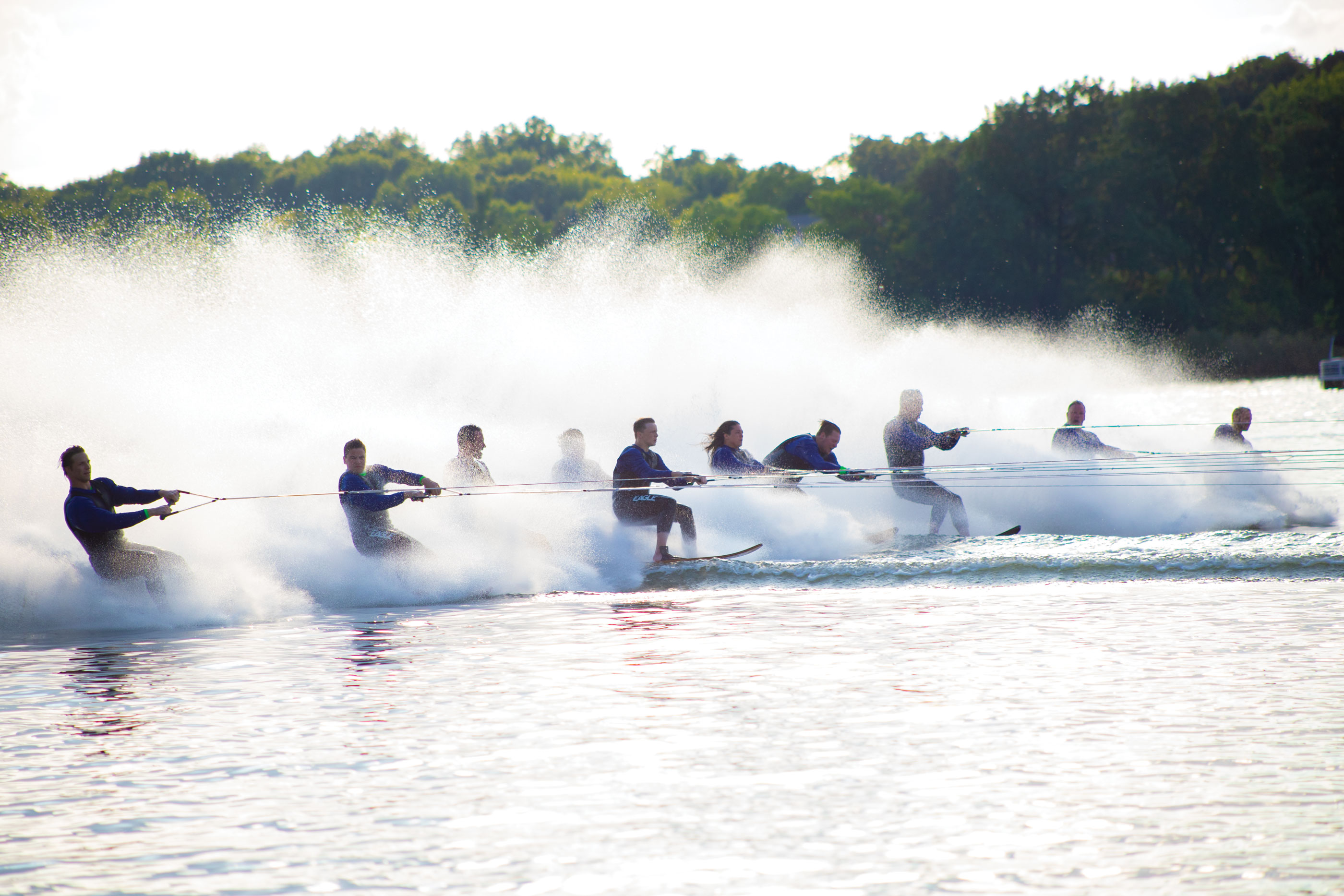 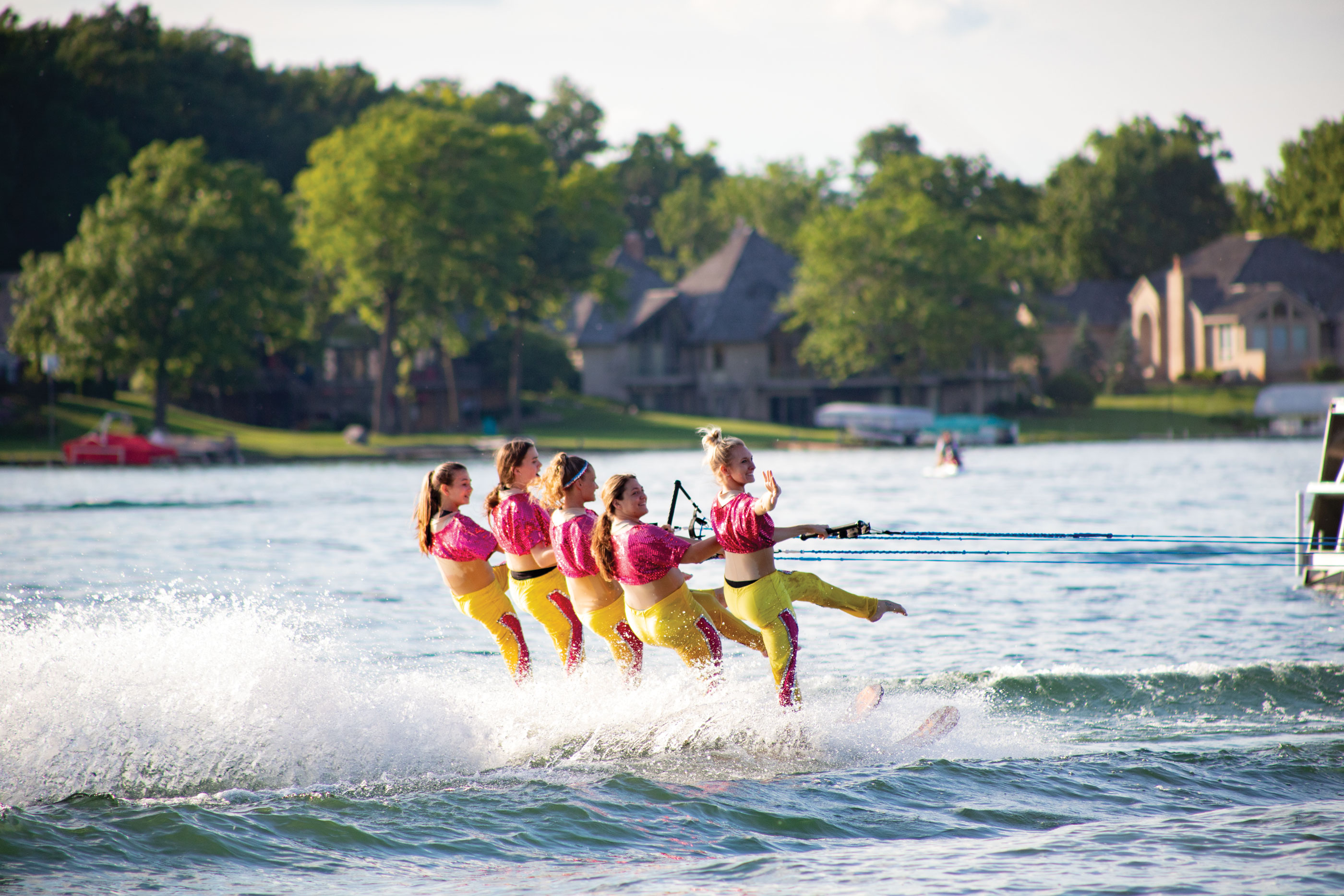 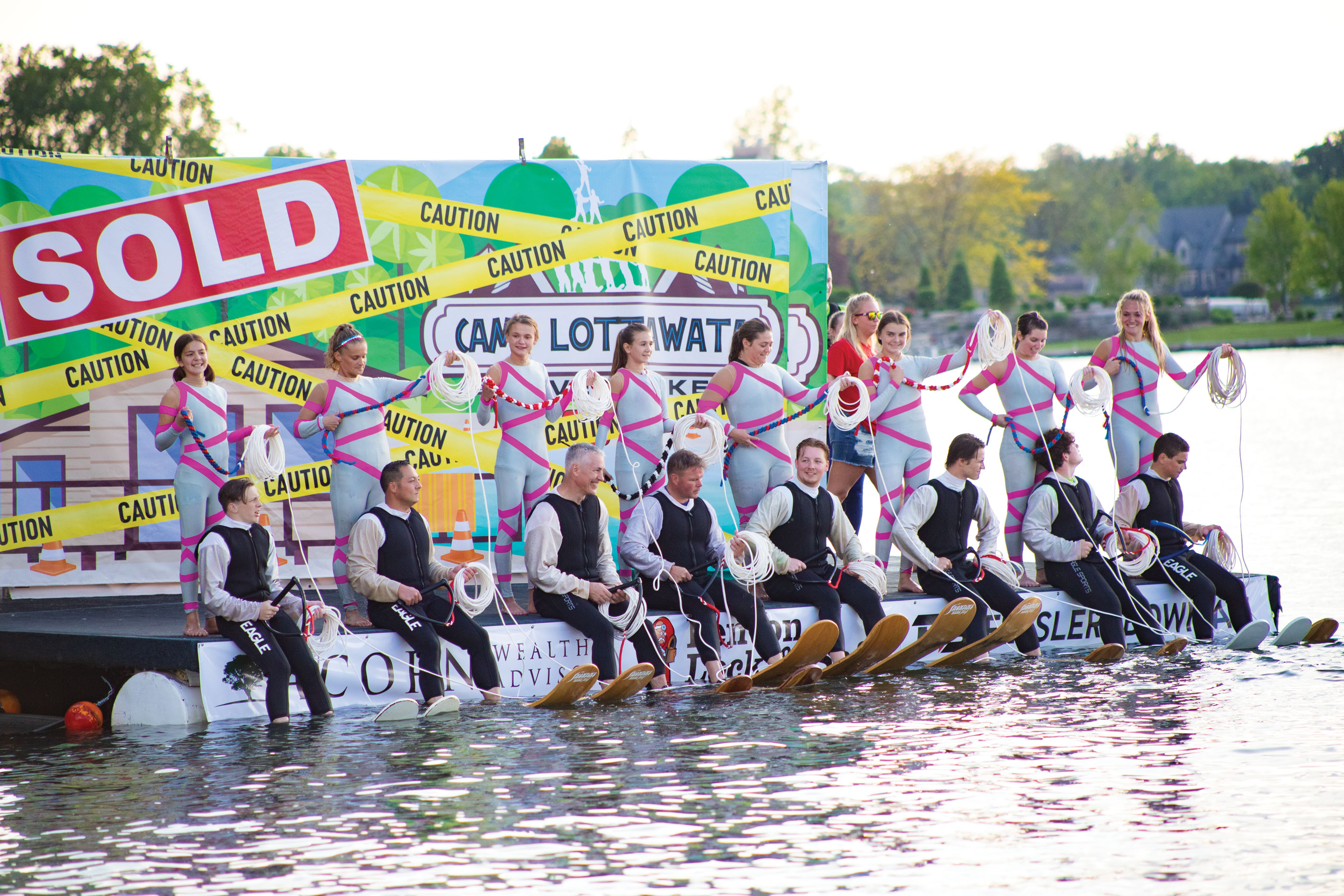 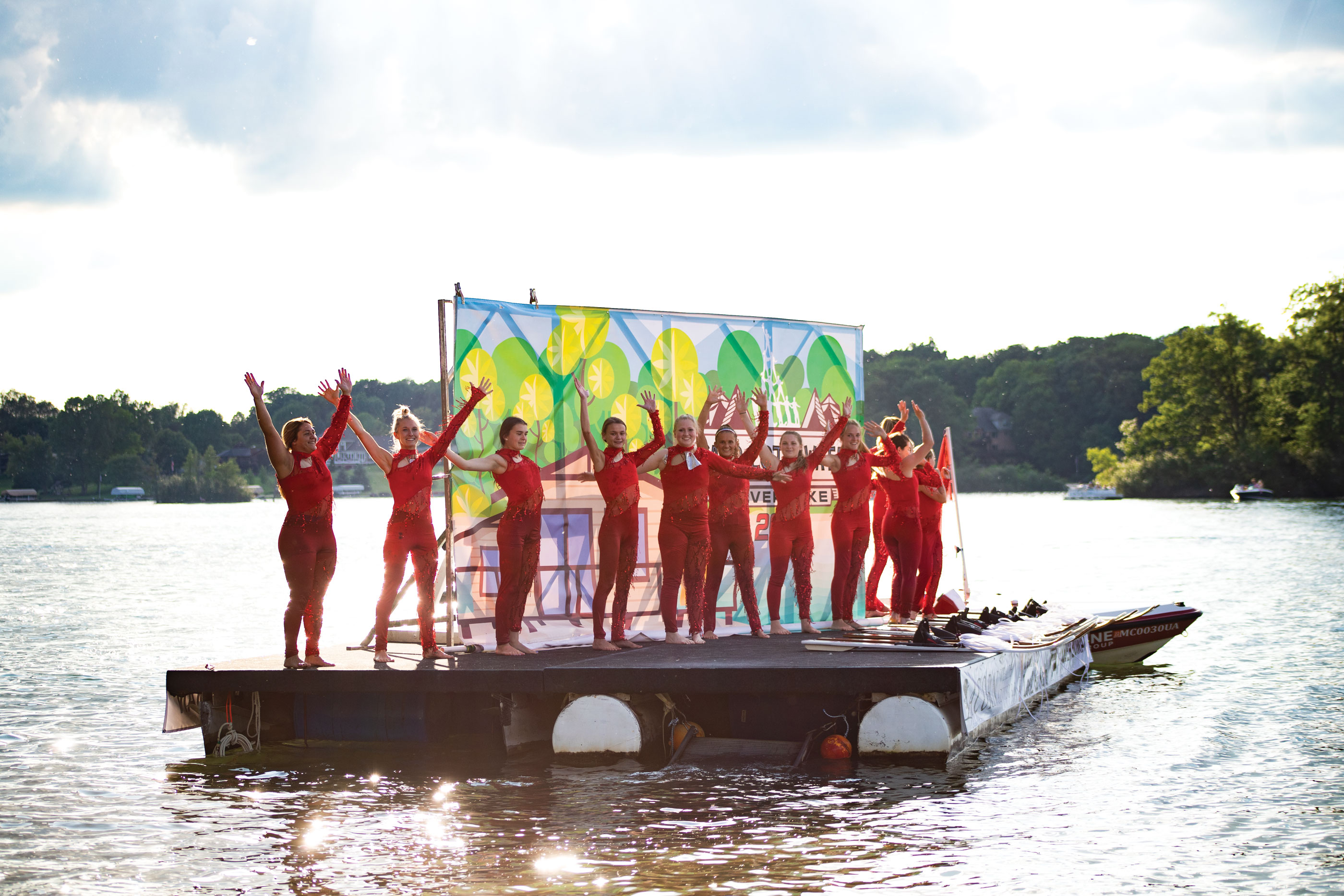 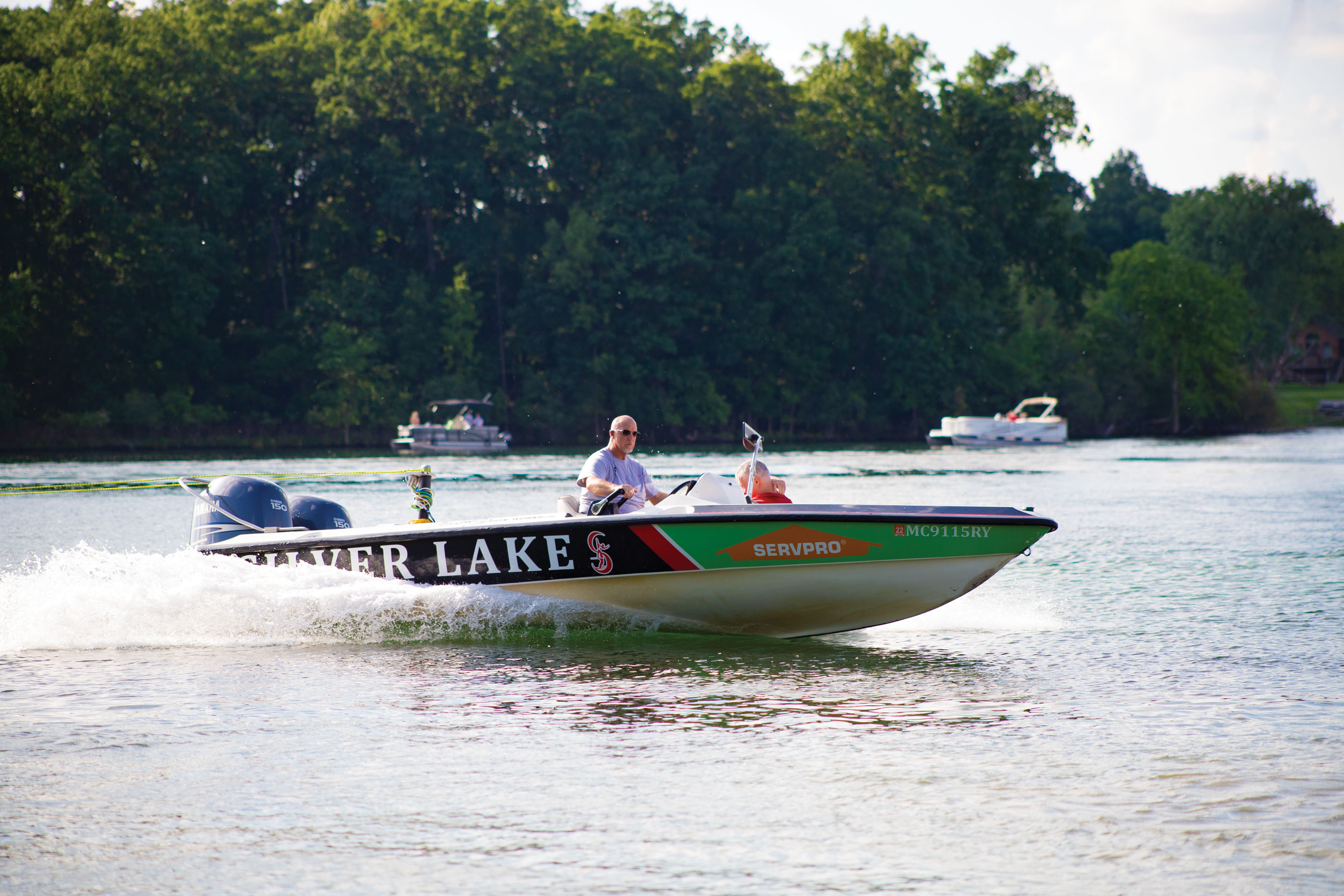