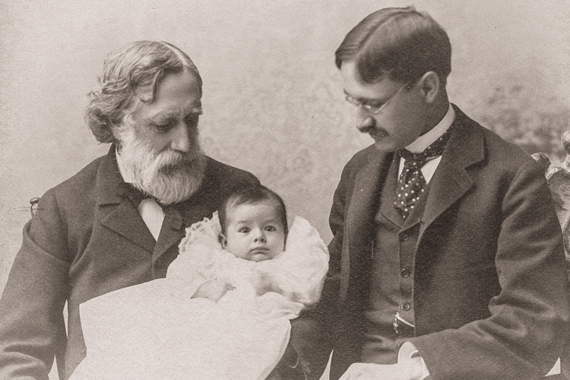 Henry Howland Crapo (pronounced cray-po), when he is mentioned at all by Flint historians, is often reduced to a footnote in W.C. “Billy” Durant’s biography (the C stands for Crapo). Although Durant is well-known in Flint for revolutionizing the city in the late 19th and early 20th centuries, his grandfather, H. H. Crapo, also revolutionized Flint long before Billy, his carriages, his cars and his corporations existed.

Born in Massachusetts in 1804, Henry Howland Crapo did not relocate to Flint until he was 54 years old. As a successful civic and political
leader in the east, he invested in pine land along the Flint River in 1855 with two partners, James Arnold and Oliver Prescott. This investment turned out to be a profitable one. Three years later, in 1858, Crapo moved his large family – wife Mary Slocum Crapo and ten children – to Flint in order to oversee his booming lumber business.

As the fur trade in Michigan dwindled, the timber trade began its ascent, and by mid-century, lumber was the state’s biggest and most profitable industry. Crapo had purchased in time for the timber boom, and at the start of the Civil War, he owned the largest lumber firm in Michigan, with yards in Flint, Holly, Fenton and Detroit. The History of Genesee County, Michigan by Franklin Ellis states that in 1854, the mills in Flint were producing nearly 17 million feet of lumber, an increase of 400 percent since 1850.

A very wealthy man by 1860, Crapo bought 1,100 acres of swampland in Gaines Township, known as “Dead Man’s Swamp” because of its malaria-carrying mosquitos. He drained the swamp by digging a ditch for the creek, and established a farm, which he named “Grassmoor.” Draining wetlands for farming purposes was a revolutionary practice at the time, and Crapo’s initiative was copied across the state, greatly affecting its landscape and agricultural productivity. The farm was prosperous, and in 1868, Crapo purchased some Hereford bulls from a farm in Guelph, Ontario. As the first man to introduce this breed to Michigan, the success of the Hereford cattle on the Crapo Farm encouraged other Michigan farmers to accept the breed. In fact, by the 1920s, the farm’s main business was the production of breeding stock, and it held the distinction of having the oldest Hereford strain in the United States.

Although Crapo’s agricultural legacy seems paltry to us now, it is because we “moderns” have little understanding of agrarian life. Before the industrial age, the average American citizen was a farmer, his life dominated by the soil and the seasons. Crapo’s transformation of unusable swamps into viable cropland was an innovation to land usage practices. The History states that Crapo’s farm was “a monument to his far-seeing sagacity, his practical agricultural wisdom, and his vigorous business ability.”

Crapo wasn’t finished making his mark on Michigan yet, however, and having reached new heights in the economic sector, he switched gears and focused on politics. In 1860, the same year that he established Grassmoor, Henry Howland Crapo became the city of Flint’s fifth mayor. One year later, after serving his mayoral term, he was elected to the Michigan State Senate. In 1864, he became the 14th governor of Michigan and was re-elected in 1866 by a large majority. He was in office when the 13th amendment to the Michigan constitution was passed, and oversaw the end of the Civil War. Governor Crapo also garnered perhaps one of the greatest accolades a political leader can ever receive: recognition for the efficiency and transparency of his tenure.

As if this list of accomplishments is not sufficient, Governor Crapo was also the founder of the Flint & Holly Railroad Company, which built the Flint & Holly Railroad in 1864, and Grassmoor, Crapo’s estate, was the only Michigan farm to have its own railroad stop. After agreements between the Flint & Holly Railroad Co. and the Detroit & Milwaukee Railway, the F&H line was extended all the way to the Brush Street Depot in Detroit, where the Renaissance Center now stands. The History states that the railroad was completed “at a cost much less than any equal length of road in the State was ever constructed, wages and cost of materials considered.” What is surprising about this statement is the fact that at the time of construction, the Civil War was raging in the eastern states. In wartime, industrial goods were in high demand, especially railroad goods, as both the Union and Confederate armies alternatingly destroyed and repaired railroads as battle lines shifted. The History mentions that Crapo had secured the material “at ante war prices,” making possible the railroad’s low production cost. The F&H line was also among the first to use steel instead of iron, a change that decreased wear and tear on the line, thus reducing the need for repairs.

Keep in mind that the catalogue of accomplishments listed above relates only to Crapo’s life in Michigan, to say nothing of his earlier accomplishments in Massachusetts. While in Michigan, he instituted innovations and embarked on business endeavors at an age that, in our 21st-century view, excuses a person from the obligation to contribute any longer to society. A person in his 50s or 60s is often retired, and as such, is dismissed by younger generations as a relic, put to pasture because he has nothing left to offer. This snapshot of the last two decades of Henry Howland Crapo’s life provides a lesson for people of all ages. It is a reminder to the young not to neglect the wisdom of our elders; they are valuable members of our community whose memories can provide guidance for our future undertakings. And for those who are aged, who feel that they have been superseded by the vibrancy of youth, remember that every moment you are alive is an opportunity for you to do something significant. Continue to challenge yourself, and you may be surprised by the mountains you can still climb.

Henry Howland Crapo died shortly after finishing his second term as Michigan’s governor, in July of 1869 at his Flint home on Kearsley Street. His body is interred at Glenwood Cemetery in Flint, and his legacy for the city is one of fortitude, foresight, successful business planning and a good work ethic that didn’t succumb to atrophy later in life.