Goodwill Industries of Mid-Michigan is structured to ease the process for people with barriers who want to start their own business. Eric Patrick Thomas owns a graphic design business, EZ Awareness By Design, which specializes in custom apparel, signs and vinyl banners. He’s rented space in the Goodwill facility on Averill Road in Flint since 2011 and has a full-time assistant. He says owning his business is ideal for him because he requires 24-hour care and uses a power wheelchair.  Eric was severely injured in 1997 in a shooting incident which left him paralyzed from the neck down.

“If it wasn’t for Goodwill, I wouldn’t have been able to open this business,” he says. “A lot of times, people go to employers and the employers won’t work with them because of their barriers. Here, they give people an opportunity and train them.”

Through his design company, Eric is focused on inspiring others and really listening to customers to figure out what they need in a design. “I want to make sure when they wear it, the design means something to them,” he says. 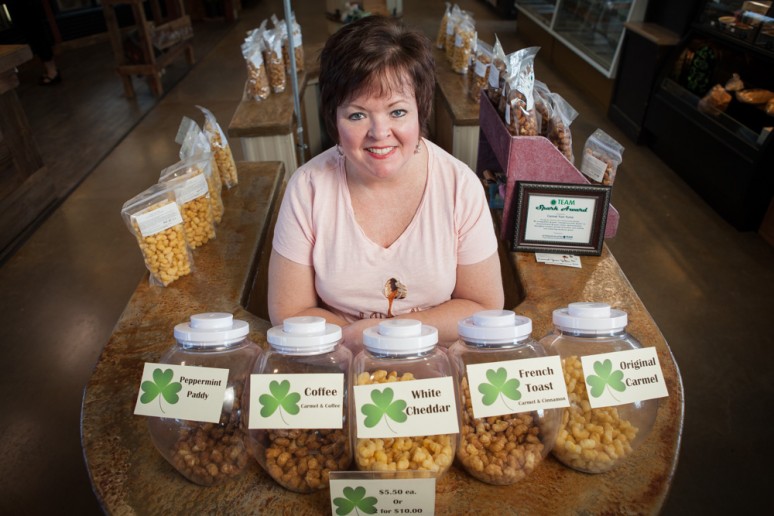 A hairstylist for more than 20 years, Tonya Burton decided to start her own business, Carmel Yum Yums, making oven-baked hull-less corn puffs with homemade caramel sauce and multiple delicious flavors. In 2014, she became commercially licensed by the Department of Agriculture through Goodwill’s facilities after taking a business start-up class at Kettering University. By May, she was selling her corn puff goodies at the Davison Farmers’ Market. “People would say to me, ‘My grandma makes those,’ but my recipe is different,” she explains.

To most people she meets, Tonya’s physical disability is not visible but she is acutely aware of it every day. She has severe left shoulder and neck pain due to longstanding spinal problems and is unable to turn her head to the left. “I needed to explore something different because of my disability,” she says. And she’s grateful for the support of her family and friends in helping her market Carmel Yum Yums, as well as the resources available to her at Goodwill and its agency partners.

Goodwill partners with several mid-Michigan organizations and agencies to facilitate services for people, for example, partnering with financial institutions for budget training to help people learn how to follow a budget after getting that job. “Sometimes it’s best to reach out to an expert in another agency for that service versus providing it on our own,” Angella explains. “That also reduces redundancies and increases the overall effectiveness of our agency and that of our partnering agency.”

Staff collect food donations for the Food Bank of Eastern Michigan, which then supplies food to people in need. Catholic Charities also partners with Goodwill by providing some donations that, in turn, provide additional revenue to promote Goodwill’s mission. In exchange, they give vouchers to Catholic Charities which allows clients there to use the vouchers like gift certificates in Goodwill stores.

People like Tonya and Eric exemplify Goodwill’s mission. They accepted some obstacles, moved beyond other obstacles and listened to experienced professionals directing them along the maze toward success in the competitive Flint-area business community.

But if you want to know one thing that really bothers them about how they are perceived by the public, it’s this: being treated like they’re less of a person due to being different. “I think people forget that just because our bodies are disabled, our minds are not,” Tonya says. “People can say condescending things.”

When Eric takes his business on the road to attend events and market his design products, he still has to convince people that he’s a professional – and that he approaches his work just as seriously as any business owner. “People do not look at me as a business owner,” he says. “I see it in their body language. They look at me like I’m doing a cute little hobby. I’m still trying to get that level of respect. Owning my own business, I’m always working, always figuring out how to make it more efficient and make it grow.”