Very quietly, and without a lot of fanfare, a group of Genesee County citizens helps those who are on the front line helping others.

The Hundred Club of Genesee, Shiawassee and Lapeer Counties is a nonprofit organization that raises funds to provide financial support to widows, or children of first responders and public servants in these counties who lose their life or become disabled in the line of duty. Within 24 hours of such an incident, a representative from the Hundred Club delivers a $3,000 check to his or her dependents. The group’s mission is to ease the burden of the family by providing funds to cover immediate expenses.

According to Jamie Hresko, President, the beneficiaries of these funds include police officers, firefighters, and agents of the FBI, the Bureau of Alcohol, Tobacco & Firearms, and the Drug Enforcement Administration. “We help anyone who puts themselves in harm’s way,” says Hresko. For example, the Hundred Club will help pay mortgages or help children of the fallen receive an education. The club also raises funds to provide safety equipment for first responders, including first aid and emergency equipment, bulletproof vests, handheld radios, personal alert systems for firefighting, and a computer network that links more than 30 area law enforcement agencies. “Our members care about the community and want to support those whose job is to keep us safe and save lives every day,” Hresko shares.

The Hundred Club concept began in Detroit in 1950. Other cities saw that it worked, and there are now more than 100 active organizations across the nation. The Flint club was started in October, 1975 by George Elges, then general manager of Buick. He invited a small group of Flint’s business leaders to lunch and had the president of the Detroit club, Bill Packer, Jr., speak to the men about the Hundred Club’s mission. In 1988, the club expanded to include Shiawassee County and in 2011, Lapeer County. In April 2011, the name was changed to The Hundred Club of Genesee, Shiawassee and Lapeer counties. It has grown to more than 300 members who are business, professional and civic leaders. “They all have the same goal – they just want to help,” Hresko adds. In addition to raising funds with special events and annual membership dues, the club accepts donations. 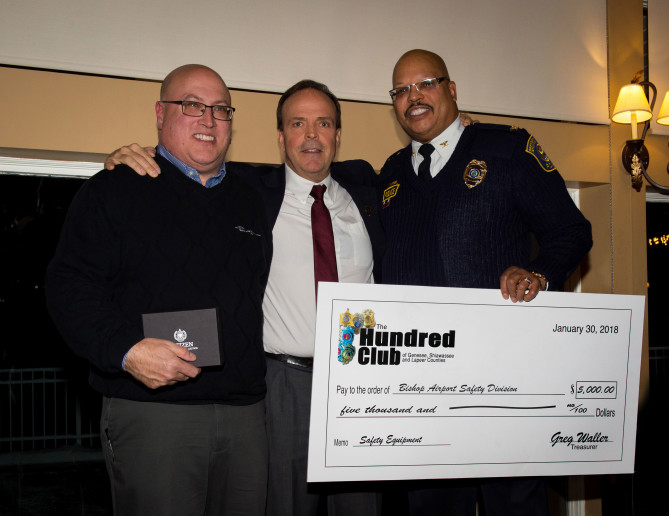 A Badge Holder’s Sporting Clays Charity Event is planned for June 22 at the Grand Blanc Huntsman’s Club. “It was a huge success last year,” Hresko reports. “We raised a lot of money and it goes right to safety equipment, every penny of it. There is no overhead for the event, as it is all volunteers.” Hresko says that over the years, the Hundred Club has donated nearly $1.5 million in safety equipment for use by various area agencies and organizations.

The Hundred Club hosts two annual events, the Annual Dinner Meeting and Hero’s Night. This year’s Annual Dinner Meeting was held on January 30 at the Flint Golf Club. Present at the dinner were all of the first responders who ultimately saved the life of Bishop Airport Police Lt. Jeff Neville, after he was stabbed at Bishop International Airport last June. “Lt. Neville talked about how the experience changed his life,” says Hresko. “Everyone who was involved had a chance to speak at the meeting, including Dr. Donald Scholten, a surgeon at Hurley Medical Center, where Lt. Neville was treated for his injuries.” Particularly moving were the words of Richard Krul, a maintenance worker at the airport, who was walking with Lt. Neville when he was stabbed. Krul sprang into action to help subdue the attacker.

Hero’s Night is held in June. “This is when we present the checks and distribute all the money we’ve raised,” Hresko reports. Nominations are made by fire and police departments, cities and townships – they all can apply for funding, and a selection committee chooses the recipients. “The recipients have the opportunity to tell the attendees of the event how much the money will help them,” says Hresko. “We have raised hundreds of thousands of dollars to help the families who suffer a loss.”

“We help anyone who puts themselves in harm’s way.”
Jamie Hresko, President

Photos Provided by The Hundred Club