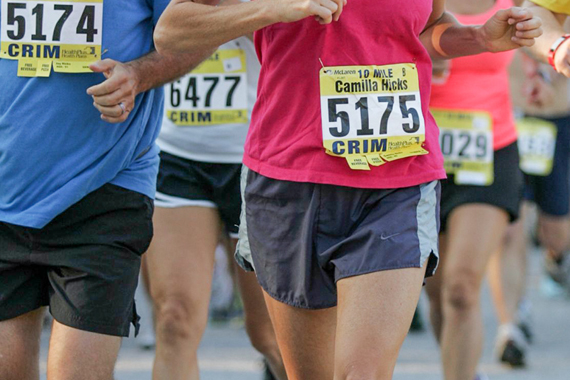 Thousands of people jam the streets of Downtown Flint. It’s a beautiful, and oftentimes hot and humid August morning. The air is alive with energy and excitement as runners stretch their legs and mentally prepare for a grueling 10-mile run. Thousands of spectators are fired up, smiling, laughing and ready to wildly cheer for friends and loved ones who are participating in the road race. Yes, it’s the fourth Saturday in August, it’s hot, and it’s Crim Day in Flint!

The Crim isn’t just a road race; it’s a celebration of healthy living. Hundreds of people have been busily preparing for the 37th Annual Health Plus Crim Festival of Races, which takes place this year on August 23-24. Andy Younger, Race Director, took a few moments out of his busy day to share details of the Crim with My City Magazine. He was appointed race director in late March and he is very excited to be a part of the organization that has turned the Crim into a premier event involving the whole community. Born and raised in Flint, Andy was living in Chicago with his wife when he was offered the position, and jumped at the opportunity to return to his roots. The Crim is part of his fondest childhood memories, having lived in a home located along the race route. “My father ran the Crim several times and I’ve run it myself,” he said.”It’s a great way to showcase the city.”

Under the leadership of a very dedicated Board of Directors and CEO Gerry Myers, the Crim Fitness Foundation is now building programs and services that target broad health and fitness issues for the young and old alike. It was in 1985 that the Crim developed a board of directors and incorporated as a nonprofit organization. It became a weekend event that included an 8K Race, 5K Family Walk and Teddy Bear Trot. In 1992, the Festival of Races was born, adding the 1-Mile Run, 8K Race walk, 5K Run and more, including the Crim Training Program. According to Andy, more than 1,000 people commit in the spring to participate in the training groups. “Some are couch potatoes until May,” he laughed, adding that the training levels vary from people pushing themselves to their limit to those who just want to cross the finish line. The groups meet every Tuesday all over the county.

The goal of the Crim Fitness Foundation is to help people live a healthier lifestyle. It fosters the value of getting fit through programs such as the Beyond 2000 Program – a community fitness program – and the Feelin’ Good Mileage Club, which is a school fitness program. One local fourth-grade student lost 14 pounds through the program when he learned about healthy eating. “It gives me chills to know that we could help someone that young,” says Andy. “It makes an impact on them for the rest of their lives.”

The festival of Races will kick off on Friday, August 23 with the Michigan Mile Race, a one-mile race around the University of Michigan campus. This is actually three different events, explained Andy. The Professional Mile attracts some of the fastest-milers from all over the nation, with a purse of $10,000. The Michigan Mile High School Challenge is for students who race for bragging rights and the name of the school and winning student added to a traveling trophy. Individual trophies are also awarded, along with T-shirts and a medal. The final heat is the Open Michigan Mile, for the more serious and competitive runners and college students. The Special Olympics race is also held on Friday evening. “It is inspiring to watch people overcome challenges,” says Andy. Saturday kicks off with the 10-Mile Run, followed by the 8K Walk/Run, 5K Walk/Run and the Teddy Bear Trot. Some changes have been made this year to the first two miles of the course for the 10-Mile and the 5K, according to the race director. “We wanted to remain sensitive to the history of the course,” says Andy, “but generally speaking, the changes will help people get in and out of the Downtown area. It’s every bit as challenging and every bit as fun!” he exclaimed.

The Crim Foundation is happy to have Health Plus as the Title Sponsor, and the company is enthusiastic to help improve the overall health of its patients and the community. “It’s such a great fit,” Andy says about the partnership. Presenting Sponsors this year include Fusion Medical for the 10-Mile Wheelers; McLaren Flint as the 10-mile Sponsor; Grand Blanc Motor Cars and Mid- Michigan Toyota Dealer as the 8-K Sponsors; First Merit Bank as the 5K Sponsor; and Financial Plus Federal Credit Union for the Teddy Bear Trot. Thousands of people have already registered to participate in the Health Plus Crim Festival of Races and the event is expected to be bigger than last year. Participants get a T-shirt if they register by August 1. Same-day registration is available, and can be done online at crim.org or at the Crim Foundation office at 352 S. Saginaw Street, Flint.

Come on down on August 23-24 and join the fun! Whether you plan to run, walk, or want to join the thousands of cheering spectators on the race route, it will be a day you won’t forget. Oh, and we almost forgot to mention the world-famous finish line celebration with great entertainment, food and fun for all the participants and spectators. “People can expect a safe, fun and joyful event,” says the race director. “The Crim brings out the best in the entire city.”