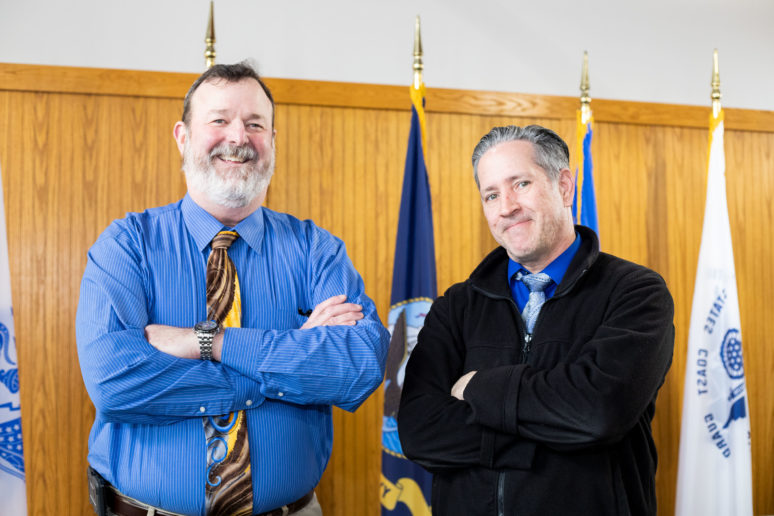 In Holly Township, there is a place, a quiet place, that is a national treasure – the Great Lakes National Cemetery – a final resting place for our veterans. And both the facility’s Director, Sean Baumgartner and Assistant Director, Christopher English, are proud to work there. “It’s a privilege and an honor to be in charge of a cemetery,” says the director. “We are on hallowed ground,” English adds. “It is an honor to serve our veterans by providing them their final resting place. It’s a gift from a grateful nation.”

Baumgartner reports that thousands of people visit the cemetery each year either for a burial service, to visit a loved one’s gravesite or attend a special observance. “It’s also a place to just sit and reflect in a serene, tranquil setting,” he says.

The observance of Memorial Day takes place on the Sunday before Memorial Day, this year on May 26, at 1pm. Held in the main assembly area, it is attended by two to three thousand visitors. This year’s keynote speaker is Jim Hess. “He helped design the cemetery and is a Vietnam veteran,” says Baumgartner. The agenda includes a rifle salute and the Veterans Honor Guard from Wyandotte, MI.

Other observances held at the GLNC include a Veteran’s Day Ceremony, Wreathes Across America and a ceremony honoring POW/MIA (prisoners of war/missing in action). Twice annually, the facility hosts a ceremony for unaccompanied veterans (those with no remaining family). “It is a collective ceremony with full honors,” the director explains. “We pay them the respect they are due for their service.”

In March, a special service was held to honor the 50th Anniversary of the Vietnam War, which also honored veterans’ spouses. The event included a pinning of all Vietnam veterans in attendance. “It took us a long time to say ‘welcome home’ to the Vietnam vets and this is the first time we honored spouses,” Baumgartner shares. “The wives were in tears. It was an honor to acknowledge how important their roles were, to hug them and see the gratitude and emotions they were feeling.” One veteran was heard saying, “I’ve waited 50 years to have my spouse recognized.”

“It is an honor to serve our veterans by providing them
their final resting place. It’s a gift from a grateful nation.”
Christopher English, Asst. Director

Another way to honor our veterans is to volunteer and there are many opportunities at the Great Lakes National Cemetery. Twice a year, volunteers come to the cemetery (October and April) to clean the headstones. High school students perform community service there and garden clubs volunteer to plant flowers, English reports, adding that people also volunteer at the Public Information Center and help during ceremonies. A kindergarten class came out to plant day lilies. “Many groups help with parking and crowd control,” Baumgartner shares. On the Friday before Memorial Day at 5pm, volunteers are needed to place a flag on each headstone, and then on the following Tuesday at 5pm, volunteers remove the flags.

GLNC is charged with maintenance of two closed cemeteries in Michigan: Fort Mackinac Post Cemetery on Mackinac Island and Lakeside Soldiers Lot in Port Huron. There are veterans from the War of 1812 and the Civil War buried at the Fort Mackinac Post Cemetery, which was closed to burials in 1895. Many early burials in the cemetery are unidentified because the graves were marked with simple wooden crosses that have long since decayed and disappeared. “All of our veterans are cared for by the government to this day,” says English. 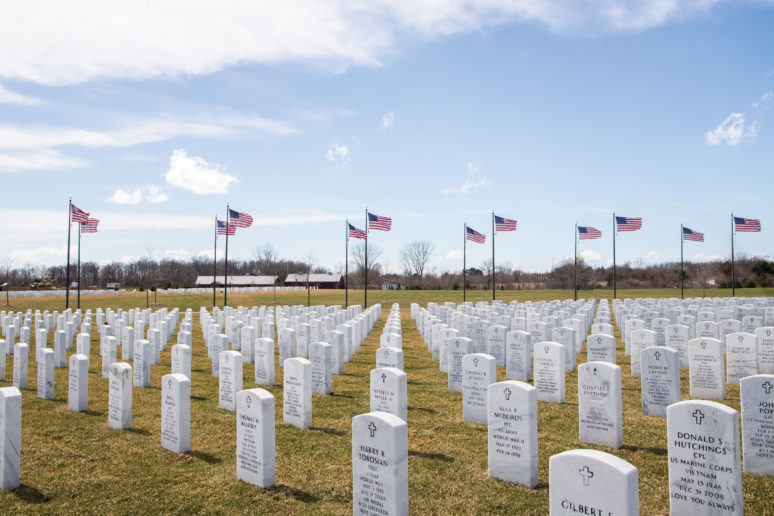 Baumgartner and English are proud to be veterans, both having served in the U.S. Air Force. “All of our staff are veterans with the exception of one who is totally dedicated to supporting our veterans,” Baumgartner reports. “We are servants of the veterans,” says English, “and we take our jobs very seriously. We touch the lives of so many people in so many ways.”

This summer on August 17, the Great Lakes National Cemetery will host an Open House from 12-4:30pm so the public can learn about the cemetery and the services offered there. Information will be available regarding the burial process, what it entails, who can be buried there, cremation and more. “It’s a day to be transparent and for people to see what’s going on,” says Baumgartner. A priority of the director is to keep the flame burning when it comes to taking care of our veterans. “We love it when the kiddies come out. We need to pass the torch to our youth.”

What does GLNC staff do on the day after Memorial Day? “We’ll be preparing for Memorial Day,” Baumgartner says, “because every day is Memorial Day at a national cemetery.” 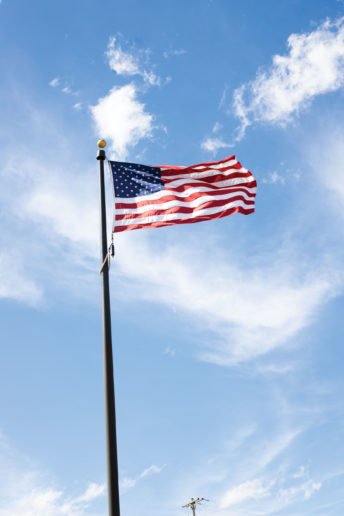 Owned by the Horton family for over 160 years, the property was purchased in 2002 for $6.2 million. A ground-breaking ceremony was held on October 14, 2004 and was attended by more than 1,400 people. The cemetery began burial operations on October 17, 2005 and averages 15 burials per day.

Over the next several decades, the 544.3-acre site will be developed in phases and will be able to accommodate hundreds of thousands of veterans and their family members.

There are two construction projects in progress at GLNC. A $30 million expansion project will start next year or the year after for another 50,000 sites.

Memorial Day was created to honor the brave people who died while serving in the U.S. military. One of the very first known celebrations took place on May 1, 1865 in Charleston, South Carolina, right after the end of the Civil War, according to History.com. A group of freed slaves who were part of U.S. Colored Troops gathered to bury the bodies of Union soldiers. During the events, people sang hymns and placed flowers at the fallen fighters’ graves.

A few years later, Union General John A. Logan declared there be a date of remembrance for those who died in the Civil War. He chose May 30, 1868 because it wasn’t already the anniversary of a battle. However, the southern states opted to create their own day specifically for Confederate soldiers. There are 11 states that still hold a commemoration for the people who fought for the Confederacy, and Virginia hosts its day of observance on actual Memorial Day.

Though people continued holding tributes for the fallen, Memorial Day was still unofficial for many more years. In 1950, the U.S. Congress agreed upon a resolution for the President to ask Americans to observe Memorial Day. Then, in 1968, the Uniform Monday Holiday Act was passed, which declared Memorial Day occur on the final Monday in May, and also required a day off work for federal employees. Finally, in 1971, the anniversary officially became a federal holiday.

Local Events on Monday, May 27 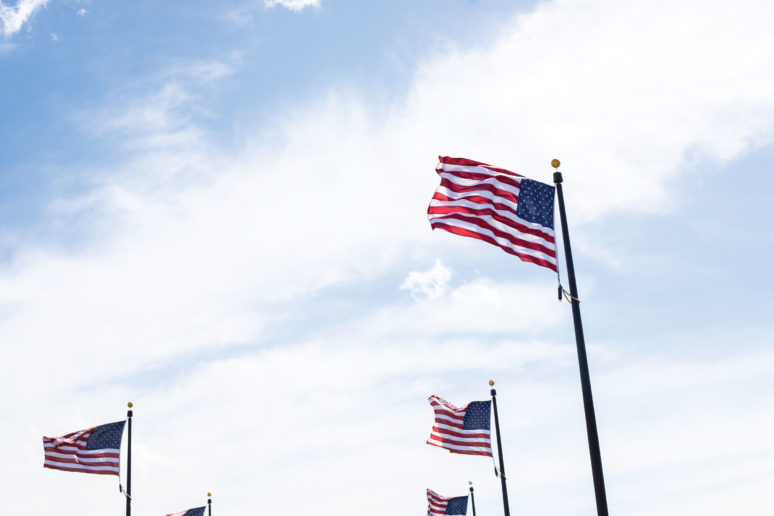 The Memorial Day Celebration and 5K Run/Walk commemorates men and women who died while in military service, supports our community through charitable giving and promotes a healthy lifestyle in the City of Burton. The run begins at 8:30am and the walk at 8:33am. Registration begins at 7am and the Kid’s Fun Run begins at 8:10am. All activities are at Atherton High School, located at 3354 S. Genesee Road. The parade, sponsored by the Burton Parks and Recreation Commission, begins at 2:05pm. At 3pm, the Children’s Area opens. At Veteran’s Memorial park, the Memorial Ceremony begins at 6pm and at 9:15pm, there is a Candle Light Ceremony. The Fireworks Display begins at dusk.

A Memorial Day Ceremony will take place at City Hall, 11am.

At 10am, the parade begins in Downtown Fenton on LeRoy Street in honor of veterans and those fighting overseas.

The parade begins at 10am, commencing on the corner of S. Saginaw and E. Maple Streets, heading east on Maple then north on Park Avenue. Once reaching Lakeside Cemetery, a ceremony will take place.

The VFW’s 70th annual Memorial Day Services includes a parade and Community Picnic. Sign the Patriot Wall at 9:30am, VFW Hall. At 10am, the parade begins from Downtown Linden to Fairview Cemetery. Following the parade, the City of Linden will host the annual community picnic of hot dogs, chips, pop, water and ice cream. A concert at the Linden Gazebo will feature patriotic and pop/rock music.

At 7:45am, a brief ceremony of remembrance will take place at the Vietnam War Memorial in Montrose, (at the corner of Ocean View and Honolulu Avenue).