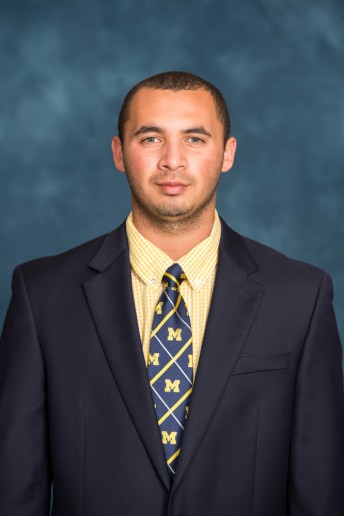 The University of Michigan football program is a perfect example of what a difference a year can make. October of 2014 saw the Wolverines mired in a 2-5 start on the way to a modest 5-7 record, and Fenton High School graduate Kenny Allen, while on the roster, was without a scholarship and yearning to become the team’s punter for the following season. One year later, much has changed for the better in Ann Arbor with numerous new faces in a bevy of places; not least of which is first-year coach, Jim Harbaugh, whose Wolverines had flipped their record from the previous season through seven games to 5-2.

Allen’s life has undergone drastic change, as well, and in a way he hardly expected. While he didn’t realize the dream of becoming the Wolverines’ punter – something he had aspired to since watching All-American Zoltán Meskó from an end zone seat in Michigan Stadium – Allen is aiding the program’s turnaround with his leg in another way. He is now the Wolverines’ kicker and was finally awarded a scholarship following the season-opening game against Utah.

“I am really excited about being able to do more to help the team win,” says Allen, who was Michigan’s holder for field goals and extra points last season. “When last season ended, I thought my best chance to play a bigger role would be as punter, but things changed at the beginning of training camp and the coaches ended up giving me a tremendous opportunity that I intend to make the most of. I feel okay about how I have done so far, but plan to improve and for me, the kickoff coverage has been great. I am just happy to be part of such a solid overall special teams unit.” 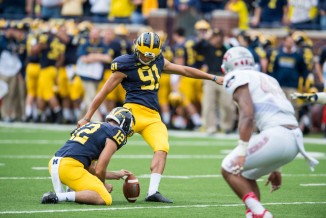 Through seven games, Allen had nailed ten of 12 field goal attempts, including a 47-yarder against Northwestern; all 22 of his extra-point tries and 19 of 41 kickoffs had sailed out of the end zone for touchbacks. He was tied for third in the Big Ten Conference in field goals and fifth among kickers in scoring with 52 points.

Harbaugh has been quite pleased thus far with the former walk-on he selected over two others. “I’m very pleased with the monumental improvement in the kicking game,” said Harbaugh on the athletic department’s website following Michigan’s win over Oregon State on September 12. “We’ve probably come as far in that area since spring practice as any area on our football team. It’s a vast improvement. Kenny Allen kicked the ball through the uprights twice today and also was good in the kickoff game.”

After appearing in 12 games the previous two seasons, punting once and kicking off a few times, Allen had every reason to feel his best chance to contribute more would be as the starting punter. After all, he had been No. 2 on the depth chart, and starter Will Hagerup was graduating. Kicker Matt Wile also had to be replaced, but Kyle Seychel was ready on the roster and highly-touted freshman Andrew David, who had booted a national high school record 58-yard field goal, was coming in.

So, Allen went back to work on his punting and, along with thousands of others in Ann Arbor, welcomed the new coach in January. “I was really focusing on winning the punting job after last season and I felt things were going well in the off-season,” Allen says. “When coach Harbaugh was hired, we were all very excited because of all the success he’s had everywhere he’s coached and things changed right away.” However, the punting competition stiffened considerably when Harbaugh announced shortly after spring practice that Blake O’Neill, who ranked among the nation’s ten best in punting average last season, was transferring to Michigan from Weber State. “That still did not change anything because I welcomed the competition and I was ready to give it everything I had to win the job when camp started in August,” Allen says.

Soon after camp began, however, Allen began to feel it would be best not to put all of his eggs into the punter basket and started competing for the kicking job, as well. “Because the competition was so wide open, I decided there was no reason I couldn’t start focusing on kicking again too, and see what happened,” Allen says. “It took me a couple of days to shake off the rust and settle in, but then I began to make some good strides.” The kicking candidates remained in suspense until less than 24 hours prior to the Wolverines’ first game when Allen learned the job was his. “We were all pushing each other and the coaches took until the last minute to decide who they felt was the most consistent and who they had the most confidence in,” Allen says. “I think they waited as long as possible to see who was going to be competing for the job the longest and hardest.” 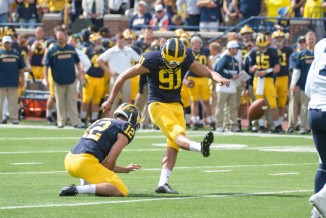 Less than a minute into the second quarter of the season-opener, Allen attempted a college field goal for the first time and converted the 29-yarder with relative ease. Four days later, Harbaugh called Allen into his office and announced he was awarding him a scholarship.

“That was an incredible moment that I was hoping one day would come, but I never dreamed it would happen so early in the season,” Allen says. “It was a quick thing – Coach Harbaugh just told me and shook my hand – but very exciting! The first call was to my mom and the second to my dad. It was just an emotional, proud moment for my whole family.”

That family includes older brother Jimmy, who is the reason Kenny began kicking footballs. Like their father, the boys began playing soccer at a young age before Jimmy took up youth football when Kenny was in the fifth grade. Never one to let his older brother out-do him, Allen joined a football team and after flirting with other positions, began thriving as a kicker and punter. “When Jimmy tried football, then I had to try it,” Allen says of his brother, who later kicked for Grand Rapids Community College. “I played defense and was not very good, but that changed when I tried kicking. Then, both of us started spending a lot of time at home practicing kicking with my dad.”

Before he even entered high school, Allen decided he wanted to kick for Michigan after watching Meskó during his record-setting career. In fact, Allen’s desire was so strong that the first-team All-Stater turned down scholarship offers from Oregon State and other Division I colleges to walk on at Michigan in the fall of 2012. “From the time I first sat behind the goal posts at Michigan and watched Meskó during the spring game, I knew I had to punt in a Michigan uniform one day, too,” Allen says. “That made my decision to pass on scholarship offers from other schools very easy.” While Allen has surprised himself by winning the kicking job, his high school coach, Jett Setzke, feels the opposite way. “I always thought Kenny’s ticket to the next level was his kicking skills because he has a big powerful leg and is extremely accurate,” Setzke says. “Kenny was a tireless worker in high school. You could find him at all times of the day and night at the field kicking and punting. Even when there was snow on the ground, it was not unusual to find Kenny at the field. I don’t know of anyone who practices his craft as much as Kenny.”

He will continue practicing that craft for the remainder of this season and next, something Special Teams Coach John Baxter is looking forward to. “Kenny is doing a great job kicking the ball off, hang-time, distance and location, and he’s made over 80 percent of his field goals,” Baxter told The Wolverine. “I’m really pleased with his progress and glad to see a kid embrace the competition and have success.”

Indeed. The college football program Allen embraced at a young age is now returning the favor.

“From the time I first sat behind the goal posts at Michigan and watched Meskó during the spring game, I knew I had to punt in a Michigan uniform one day, too.”
Kenny Allen