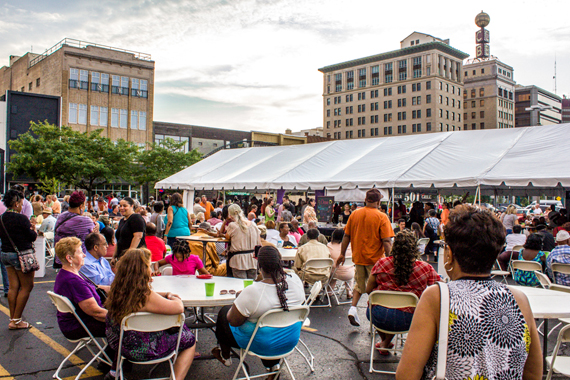 The once $30 price tag for Taste of Downtown was reduced to $10 this year in hopes of attracting more people, which was well accomplished. In fact, attendance increased from around 700 in years past to nearly 2,500 people. Though the DDA has previously rolled out Taste of Downtown with very few hiccups, this year saw the first time that the food ran out only a few hours into the night. Selling out of food would deter some from remaining Downtown for the night, but many others chose to stick around to enjoy the music and the scene, or to dine at the restaurants that participated in the event. The Flat Lot and Saginaw St. between Third and Kearsley teemed with patrons and partiers for hours on end.

Although patrons commented about the unfortunate lack of food, most still found the evening enjoyable. Syreeda Nix is an ESL instructor at UM-Flint and a graduate of Flint Southwestern Academy. She brought six of her foreign national students out for Taste of Downtown. She lamented the lack of food but lauded the event’s efforts. “I thought it was really amazing and it has a lot of potential, but they definitely underestimated the number of people, so next year, they’ll need to expand,” said Syreeda.

Expansion is indeed the plan for next year. After the dust of Taste of Downtown had settled, Gerard Burnash of DDA explained to My City Magazine that they have heard the cry of the people for bigger and better. “We plan to add more live music and double the size of the tents next year,” he said. “We might even throw in a happy hour.”

Petros Gheresus is a Flint native who relocated to Portland, OR for work in 2011. He was in town visiting family the weekend of Taste of Downtown, so he came out for the happening, and says he was blown away by how far Downtown Flint has come since he left town. “When we were kids growing up, all we wanted was a place where we could go and feel safe and have a good time,” he said. “It’s nice to see that now that we’re older, we’re the people forcing the change and making it a nice town.” Gheresus took a look at the renovation and the resurgence of life Downtown and likened it to something he’s seen occur over the past few years in the northern Portland area. Having witnessed the difference that renovation and events such as this can make in a city, Gheresus is considering moving his young family back home.

Taste of Downtown serves as yet another example of the great things happening in Flint. There is no longer talk of what ifs, and maybes. The city is doing the things that people have wanted to see for decades. With any luck, many will continue to support the new local businesses and withhold criticism as Downtown and the city as a whole work through the growing pains of renewal into continued growth and peace.

Are you interested in purchasing photos from this story? Go HERE and select the “Taste of Downtown” category.