Sugar and spice and everything nice … these things come to mind when thinking about the luscious, decadent and delicious desserts we enjoy during the holiday season. If you want to indulge in some heavenly treats this Thanksgiving and Christmas, here are a few of the local eateries and bakeries that topped the list of “Best Desserts” in the 2019 MCM City’s Choice Awards. 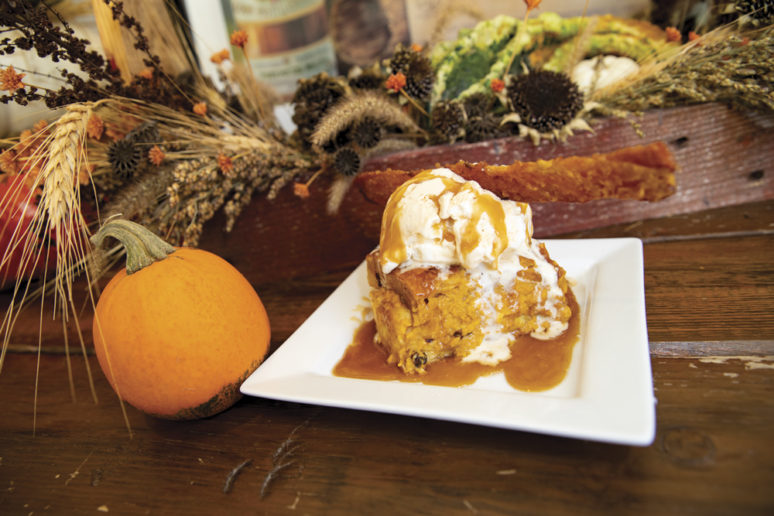 During the holidays, the seasonal dessert on the menu at Cork on Saginaw is a delicious Pumpkin Croissant Bread Pudding served with maple smoked bourbon ice cream, topped with candied bacon! According to General Manager, Darci Racette, other delicious desserts include a decadent espresso walnut brownie (topped with coffee ice cream and chocolate fudge sauce), and a rich and luscious crème brûlée. 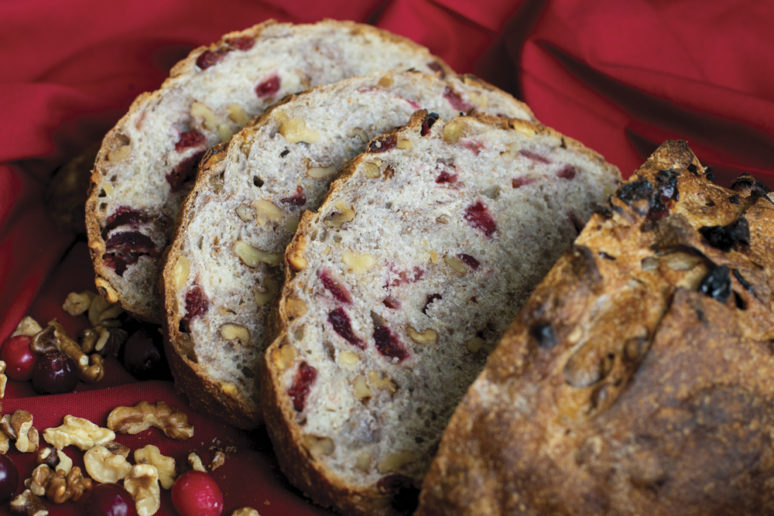 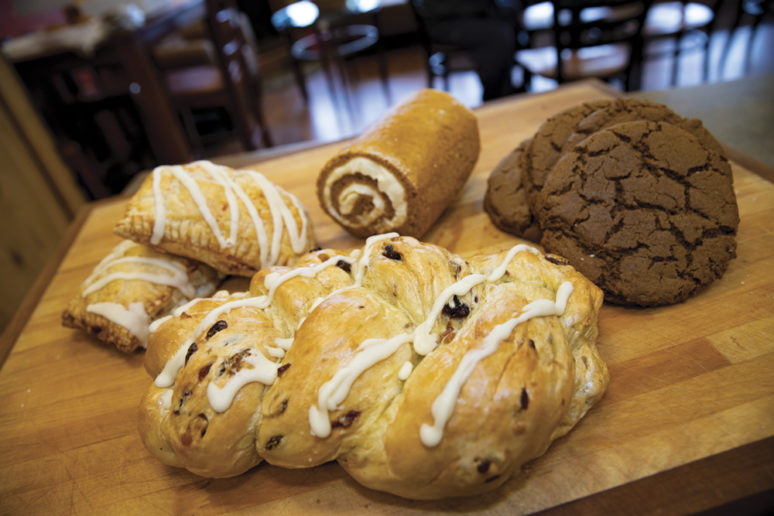 You’ll find delicious and tempting treats at the Great Harvest Bread Company during the holidays, according to Owner Scott Sassick, and the gooey, yummy cinnamon rolls are what customers rave about. For Thanksgiving, they offer pumpkin spice bars, pumpkin rolls and white chocolate pumpkin cookies. Tea cakes are also very popular during the holidays. “And, we bake a boatload of cookies at Christmas time!” the owner adds. 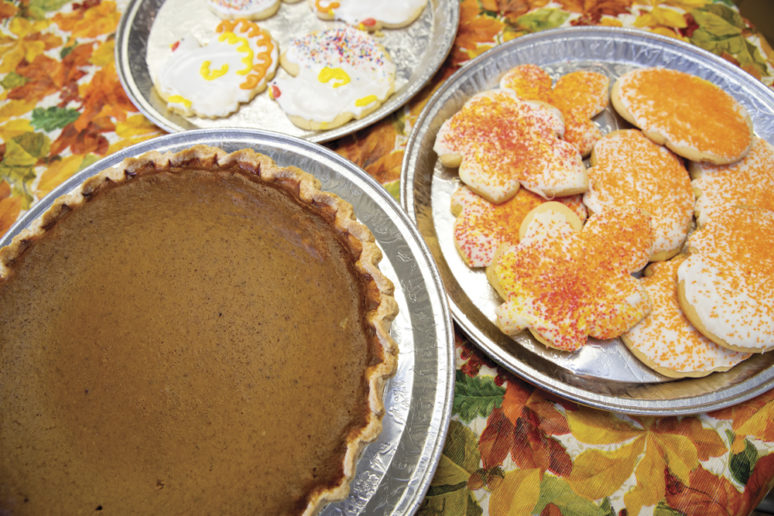 This local mainstay creates a delightful array of glorious holiday desserts. Of course, they bake many, many pumpkin pies for Thanksgiving, according to Owner, Judy Holdorf. But their other tempting pie varieties are also popular during the holidays. The stores’ glass cases are filled with banana cream, chocolate cream, apple and cherry pies. Other customer favorites are coconut cream, raspberry cream, egg custard, buttermilk and lemon, to name a few. For Thanksgiving, you can get cookies cut into the shapes of fall leaves or a turkey. You’ll also find chocolate chip, peanut butter, molasses and sugar cookies baked for King Arthur’s popular Christmas Cookie trays, available at the end of November. 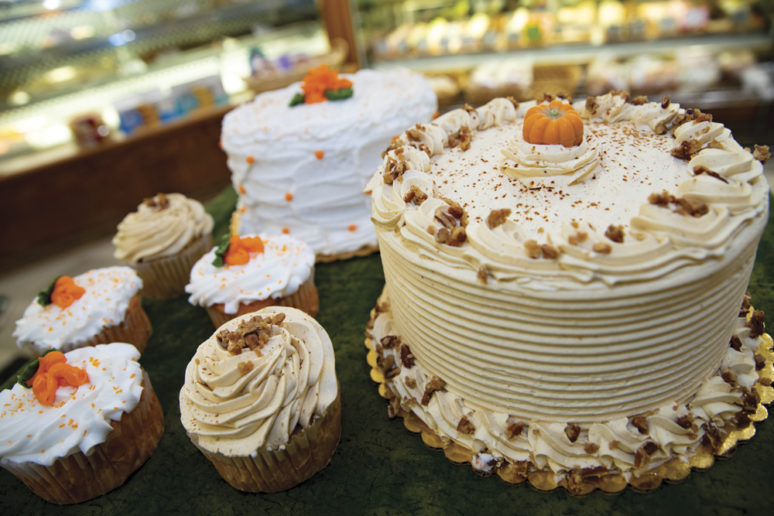 During the holidays, Oliver T’s talented bakers create a variety of specialty cakes, according to Cake Decorator/Supervisor, Johnnie Robertson-Leek. Available from November through Christmas, the cakes are a delicious addition to both the Thanksgiving and Christmas dinner tables. “The Magic Pumpkin cakes really blow out of here,” she says. The luscious, double-layer pumpkin cake is made with pumpkin Italian buttercream. Other pumpkin treats include: pumpkin-praline pies, pumpkin cheesecake, pumpkin bread pudding and Magic Pumpkin cupcakes. Popular during the Christmas holiday is “The Dickens” – an orange-cranberry cake with vanilla buttercream icing and a candy cane decoration. You’ll also find Mistletoe Ridge Cake, Frosty Cake, Snowy Coconut Cake, Candy Cane Cake and Raspberry Tree Cake. This festive treat assortment is available through November and December. 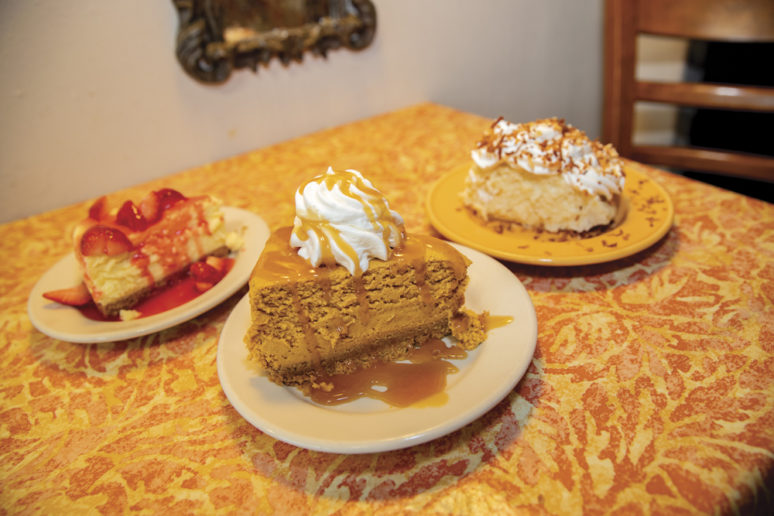 Well known for fabulous desserts, Pesto’s certainly doesn’t disappoint during the holidays. Pumpkin Cheesecake topped with whipped cream and caramel is a customer favorite and is only available through the month of November, reports Owner/Executive Chef, Rich Redmer. For the Christmas holiday, customers love the Peppermint Cream Puffs: peppermint ice cream in a cream puff, drizzled with chocolate sauce and topped with whipped cream. Also on the holiday menu is a decadent Chambord Ghirardelli Cheesecake. Two other crowd-pleasers that are available all year are the house-made Coconut Cream Pie and Bell’s Heavenly Chocolate Cake – a moist cake filled with chocolate ganache, mousse and raspberry sauce, topped with chocolate buttercream frosting. 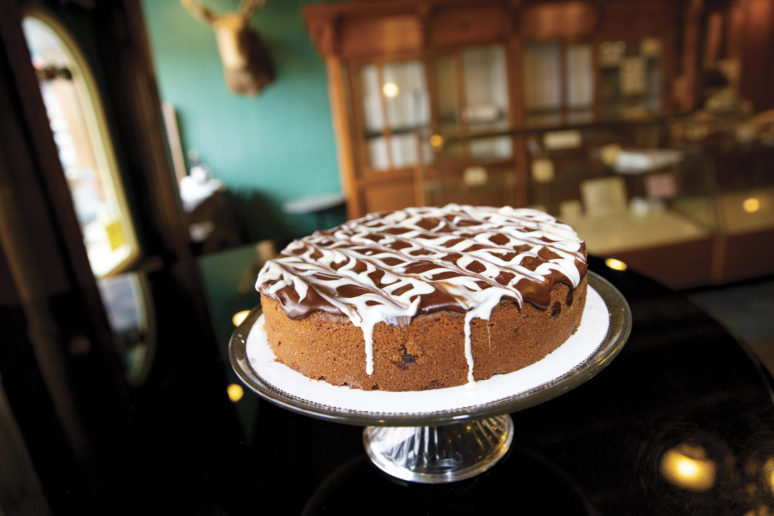 Delectable baked goods both sweet and savory are on the menu at The Rye Bakery, according to Owner, Bryan Rubenstein. A special savory treat made only around the holidays is Tautier, a French meat pie that is typically eaten on Christmas Eve. Also popular for the holidays is a small, tart-sized dessert called The Bourbon, made with three different chocolates soaked in bourbon, crushed walnuts and pecans, and topped with chocolate ganache. “It’s very dainty and very decadent,” says the owner. The Russian Crumb Cake is another holiday treat, made with sour cream, topped with a streusel of cinnamon, brown sugar and pecans, filled with chocolate morsels and topped with chocolate. Delicious!