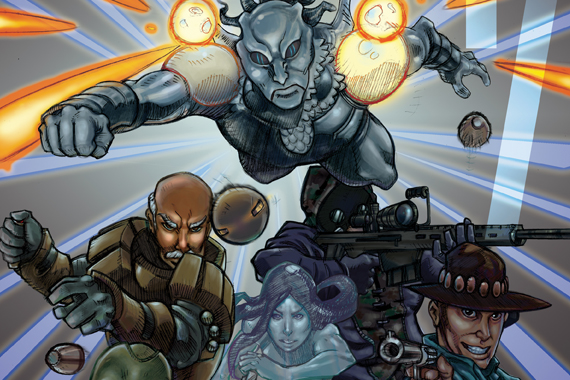 This one is not for the faint of heart, but admirers of the raw and grit will appreciate the new look of comics created by Chad Gibson of Sinister Undertone Comics. Gibson designed comics filled with monsters of old: vampires and vampire hunters who are true to their traditional historical characterizations, and not the kind that have saturated pop culture of late: “sparkling zombies with love interests” as Chad would say.

Gibson was in conversation some ten years ago with friend Jeremy Jones about writing and illustrating a comic book series in Flint. His goal was to showcase local talent and to help put that talent “on the map.” Along with that, Gibson wanted to give local comic book enthusiasts and Flint expatriates the world over a chance to open a comic book made in their hometown and recognize the places that are present in its scenes.

What would evolve from Gibson’s ideas and his conversation with Jones was an antihero series called Karma. The title character is an unassuming Flint resident who is turned into a more sinister creature against his will and who must deal with the new and raging emotions within. His conversion to the dark side takes place in the parking lot of La Azteca Taco House on Court Street, an example of the use of local places for scenery.

In Karma, Gibson wanted a raw character that, in his view, would embody the dark recesses of the old and abandoned buildings that litter Flint. He wanted a character very true to real life, who would not simply be a “good guy or a bad guy,” but would instead live by a code that exhibited “moral shades of gray.” Gibson, a self-described “comic book nerd” who has long enjoyed stories with a darker tone, is what some might call a purist, which explains why he is quick to bemoan the trendy depictions of vampires, werewolves and the like. Critiquing the current vampire genre in particular, Gibson exclaimed in despair, “They don’t even have fangs!”

Karma has seen its release just this past year. It is the culmination of hard work over many years from a team that has several other series in the works. The team comprises Gibson as president, Jones as vice president, creative director Jovon Tucker, colorists Cassie Henry, Jon Nutter and Yung Yang, and artists Laurell Bryant and Aubrey Bogdonovicz. Their work is available on the shelves of at least ten comic book shops in Flint, Lansing, Saginaw and Detroit, and they have represented their work at several local comic conventions, more commonly known as comic cons.

Though Karma has been the team’s focus in terms of assembling new issues, they have also amassed a number of characters and series to both support Karma and stand on their own as independent storylines. Whatever comes of their work, Gibson is satisfied with their accomplishments thus far. “I’ve achieved my dream,” he says. “If it flops, I’ve still done what I’ve set out to do. I have a physical comic book on the shelf.” But the lure of his dark arts assures us that Sinister Undertone will not flop, as Gibson and his band of talent seek to explore the underworld of comics, Flint-style.

PHOTOS BY DANEN WILLIAMS AND PROVIDED BY CHAD GIBSON