Costa Papista never envisioned that becoming the ultimate soccer dad would result in bringing one of the nation’s most successful semipro teams to Flint. Professionally, the 51-year-old, suburban Detroit native has made his mark in hockey as an executive with several professional and amateur franchises. Most recently, Papista was instrumental in bringing an Ontario Hockey League team – the Flint Firebirds – to Genesee County, serving as team president. 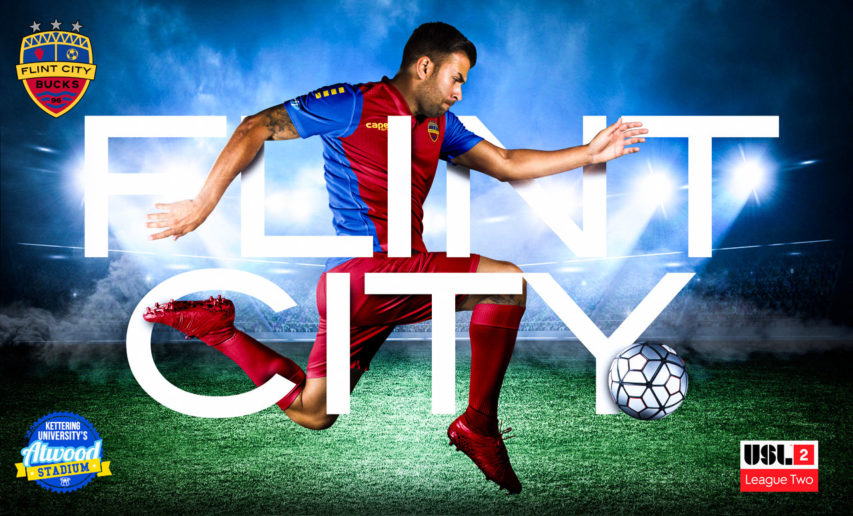 While Papista was experiencing success on the ice, daughters Eva and Stella began displaying their talent on the soccer field. As their involvement in the sport grew, Papista found himself intrigued by it. “The more I attended my daughters’ games, the more I developed an appreciation for everything about soccer – the strategy, the skill-set it takes and other aspects,” Papista says. “I remember thinking that I would like to be more involved with the sport in some way.” After leaving the Firebirds when his contract expired last June, Papista did exactly that. 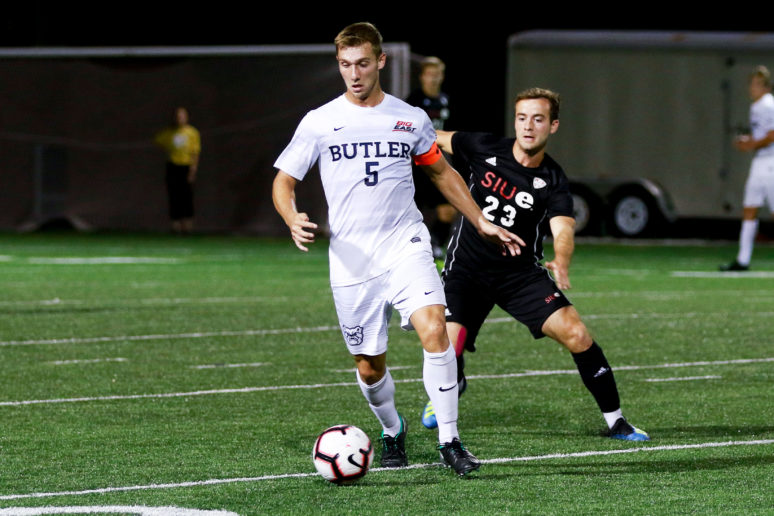 The Bucks have had at least one player drafted by MLS every year since its inception.

His mind always churning with ideas, Papista thought back to when he attended the Gridiron Classic high school football games at Kettering University-owned Atwood Stadium. “I ran into (Circuit Court) Judge Duncan Beagle there and he filled me in on Atwood’s incredible history,” he recalls. “I was amazed by what the people at Kettering have done with it (since purchasing it in 2013). I thought it was a drop-dead gorgeous stadium that would be a great venue for a soccer franchise.” After bouncing the idea off Kettering President, Robert McMahan, and others at the school, and receiving positive feedback, Papista reached out to Dan Duggan, Founder and CEO of the highly-successful Michigan Bucks, for advice. The two developed an almost-instant rapport and their conversations took an unexpected turn. 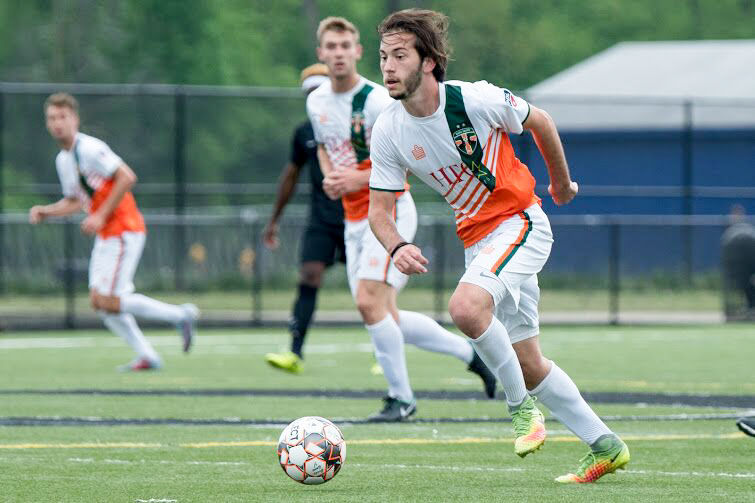 “No, I had no intention of moving the team, but then I got the call from Costa,” says Duggan, a 2010 Michigan Soccer Hall of Fame inductee. “He talked about wanting to bring a soccer team to Flint and we began to realize that maybe the Bucks should be that team. Costa was the perfect person to make it happen because of what he’s already done in the community with the Firebirds.”
The deal was sealed when Duggan and Bucks Director of Coaching, Gary Parsons, visited Papista in Flint. “Our talks led to a process of moving the Bucks that took on a life of its own,” Papista says. “Dan and Gary were both blown away by Atwood and loved the idea of playing in an outdoor stadium again. We discussed what a great fit Flint would be and what I could do from a marketing and promotions standpoint.”
In October, the Bucks’ move was announced.

“The quality of soccer will be exceptional.”
Costa Papista, President

“We were impressed by what Flint could offer us. I feel it’s a city coming back from some rough times and we want to be part of the community which has such a strong youth soccer presence,” Duggan says. “Atwood will give us a good, home-field advantage and will provide a great atmosphere for fans. Our coaching staff and players are really excited.” 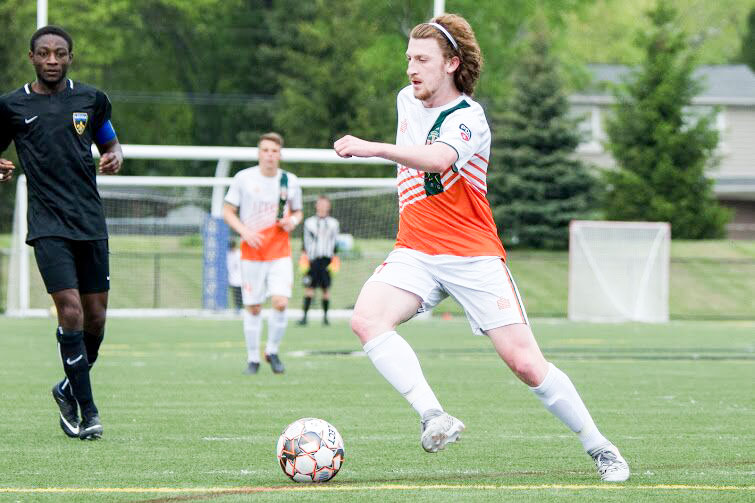 Among the things they are most excited about is playing outdoors after 11 seasons at Ultimate Soccer Arenas, a 2,000-seat indoor facility. Atwood, which celebrates its 90th anniversary this year, can accommodate 11,000 spectators. “Ultimate Soccer Arenas was great for us in some ways, but playing outdoors – that’s such a tradition of soccer,” Duggan says. “Our fans made that very, very clear to us. They will be pleased with Atwood. We expect to retain those fans with Flint being only about 35 miles north of our old home, while gaining new ones.”
The name “Flint City Bucks” was determined through a naming contest which generated more than 1,000 entries. Fans chose to retain the nickname the team has had throughout its history, while “Flint City,” of course, signifies its new home. Uniform colors are blue, red and gold. Blue signifies Flint’s history of blue-collar labor, as well as the Flint River. Red honors the historic red bricks on Saginaw Street in downtown Flint while gold represents Kettering. The logo also features an arrowhead which honors Chippewa Native Americans, the area’s first residents. 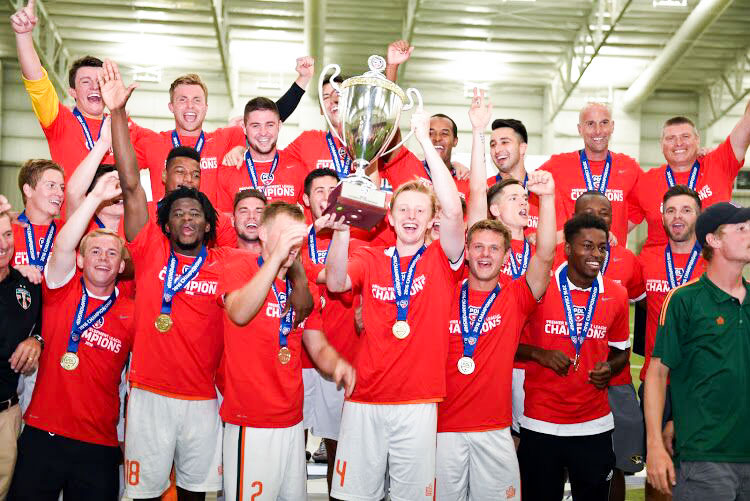 In 1995, Duggan and his brother, Jim, founded the organization in Saginaw as the Mid-Michigan Bucks. The team remained there until moving to Pontiac in 2003 and becoming the Michigan Bucks. Along the way, they have racked up a league-record 249 wins, five league regular-season conference titles along with seven Central Conference and 14 Great Lakes Division championships. The Bucks have never experienced a losing season.
A total of 81 Bucks players have been drafted or signed by MLS teams since 1999. They are the only team in the world with at least one player drafted in every MLS SuperDraft since its inception. As of mid-March, the roster was still being finalized, but among the top players will be first-team All-American Giuseppe Barone (Michigan State), first-team All-Big East performer Jared Timmer (Butler) and Wisconsin University standout, Mitch Guitar.
Demir Muftar, Bucks head coach from 2013-17, returns to that role this season. His assistant is Andy Wagstaff, a former Bucks assistant in 2010 and 2013 who is back after four seasons as Saginaw Valley State’s head coach. While there, he led the Cardinals to a 56-16-10 record, including two conference titles and four NCAA Tournament berths. “Our pre-season roster looks formidable,” Wagstaff said. “We’ll compete for a national league championship, like always. I think we’ll have the depth to be very successful. Depth is key, because you don’t always have all players at every game due to other soccer commitments and sending some to MLS camps.” 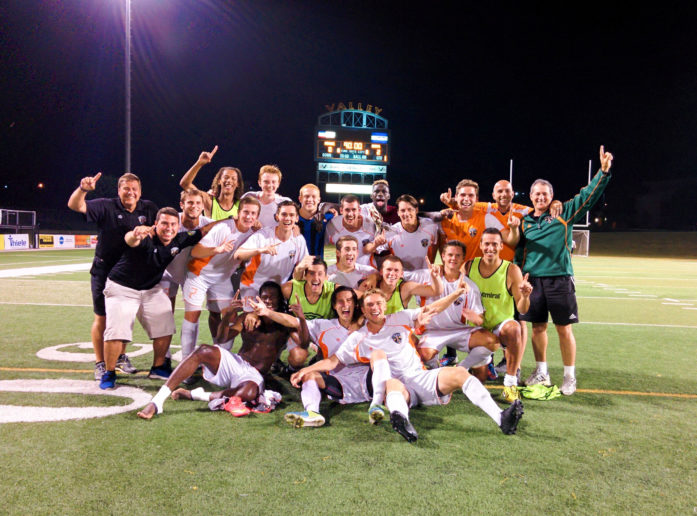 Season tickets start at $85 while single-game tickets range from $5 for children 12-and-under to $10 for general admission and $15 for premium seats. Genesee County Youth Soccer players 12-and-under will receive a punch ticket for free admission to all games, and kids from Whaley Children’s Center will also be admitted free.

“Games will be outstanding community events with live music, a beer garden and other activities,” Papista said. “The quality of soccer will be exceptional.”
To purchase tickets or for further information, visit FLintcitybucks.com.