It’s not just a budget-friendly place to shop for a great deal on clothes or an interesting trinket, hardcover bestseller, vintage toy or your next Halloween costume. Behind the scenes, Goodwill Industries of Mid-Michigan is a close team of professionals working together to train people who have significant personal barriers to employment.

“Their barrier makes it challenging to go into traditional jobs, so we explore different options for them,” says Angella Thompson, VP of Retail Operations, Marketing & Mission Integration. “We’ve been turning donations into jobs since 1932. Most of the money used to fulfill our mission comes in through our retail stores.”

Flint native William Thompson has been employed with Goodwill in Flint since July 2014. William served in the U.S. Marine Corps in the early ‘90s and was stationed in California, then in the Persian Gulf and Somalia. Following his service, he developed bipolar disorder which impeded his ability to keep a stable, rewarding job. “A short time later, I became disabled,” he explains. “I kept having problems. It finally dawned on me that I needed professional help. I wanted to get back into the workforce, too.” 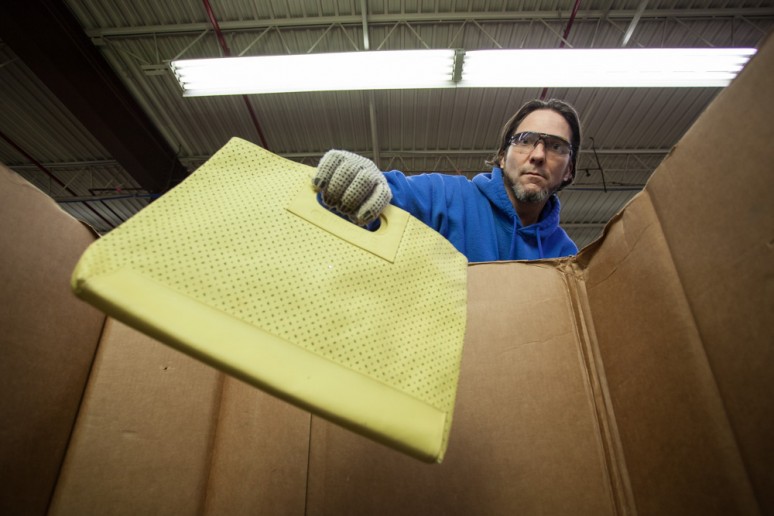 At Goodwill, William sorts a variety of donations on the salvage line. He inspects donated goods for marks, scratches and cleanliness, then sorts them into bins for metal, plastic, paper and such, setting aside the higher-end donations for the Birch Run store or Goodwill’s online store. “One man’s junk is another man’s treasure,” he says in his sincere, soft-spoken manner. “A lot of the things I think are junk, someone might refurbish. Everything has a use.”

He’s discovered some interesting items. “One time, I found a pair of dentures in a container,” he recalls, smiling. “We’ve gotten some really nice paintings and jewelry that turned out to be expensive. One time, I found some Harley-Davidson saddlebags, and we got some parts from old train kits. It might not be of value to you and me, but someone looking to complete a train set might find those extremely valuable.”

Having that kind of open-minded perspective toward his work is reminiscent of Goodwill’s indiscriminate approach toward completing its mission, with the staff overlooking seen and unseen obstacles to determine how individuals seeking assistance can reach their employment goals.

Goodwill partners with several local organizations to pursue its mission. William utilized resources through Genesee Health System and Metro Community Development for the support he needed to turn his future in a positive direction and be able to support his young son. These resources led him to his job at Goodwill, and he’s well on his way to achieving his goals to be self-sufficient and financially stable. “Before I got help, I felt like I was a drain on the system. It really did affect my self-esteem,” he says. “Ultimately, I’d like to get into a full-time position.”

He’s thankful that Goodwill wanted to offer him job skills training to further his goals. “When I walk into a Goodwill store, I feel a sense of pride because I know they’re helping someone like me with a disability but also the average person,” he says. An “average” person is really a misnomer these days. The folks at Goodwill have tremendous respect for William and others with physical or mental barriers trying to do whatever it takes to manage their lives in productive ways.

Though Goodwill originally served people with only physical or mental disabilities, even that perspective has broadened and developed in conjunction with the changing social and economic needs of the mid-Michigan area. Workers who lost their jobs in the auto industry or other businesses that were hit by the economic downturn have received the benefit of job training through Goodwill and its partners. Trying to secure a job in a completely different career posed significant challenges for those who had been doing the same line of work for years and lacked the skills they needed to transition into something else following a job loss.

Convicted felons who finish their prison sentence and attempt to re-enter the job market have found a welcome mat at Goodwill. The organization’s employment applications purposely don’t ask about an applicant’s history of felonies. “Goodwill has removed it because we feel subconsciously it prevents people from getting that job interview,” Angella explains.

Five years ago, Bobby Simbler of Flint found a job at Goodwill through the Michigan Prisoner Reentry Program after serving 21 years in prison for second-degree murder. He moves donated materials as a driver and works with the production team. He’s also involved in the Ban the Box campaign to support the removal of the felony question from employment applications and give jobseekers with past convictions a fair chance to compete in the job market after serving their time.

Bobby’s gregarious nature and big smile reflect his inner overhaul and new outlook. Outside of work, he mentors youth by volunteering at the Kennedy Center, and he occasionally picks up his guitar to play.

“Change comes from within,” he says. “A lot of people are afraid of change. It all starts with you. You have to want it.”

For Bobby, changing his ways took a long time. He says that while in prison, he caused a lot of problems there due to his own actions, and consequently was moved around a lot within the system. “When I was young doing dumb stuff, people didn’t listen to me,” he recalls. Thirteen years into his prison sentence, he realized he could change if he wanted to. “One day I went to shave my face and I didn’t like the person I saw in the mirror,” Bobby says. “I changed my thinking. I started wondering what I was gonna do when I got out. I thank God for Goodwill because they gave me the opportunity to prove myself.”