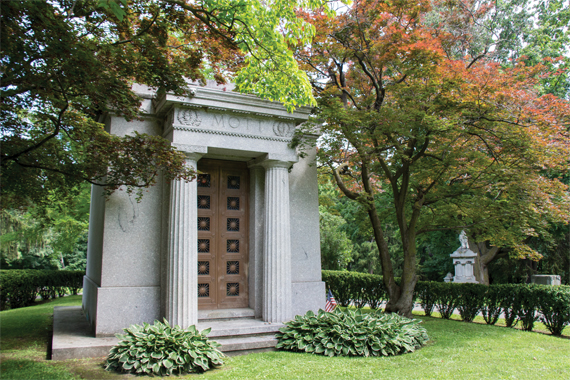 An article about a cemetery in October may seem banal at first, but bear with me. Perhaps I felt compelled to save my cemetery chronicle for the month usually dedicated to spooks and spirits because I felt that in any other month, interest in cemeteries is roughly on par with interest in drying paint. Personally, I have never found cemeteries eerie. Rather, I’ve always been fascinated by the personal histories to be found there. I think we sometimes forget that history is made up of our stories. Every life is a thread woven into the tapestry we call history, and no thread is insignificant. After all, one day in the distant future, our only legacy will be the engraving on our stone.

Glenwood Cemetery, one of the city’s oldest active cemeteries, sits peacefully on the southern side of the southern-most point of the Flint River. Founded in 1857 – only two years after the city’s incorporation – Glenwood is both historical and historic: in addition to serving as the resting place for many of Flint’s most renowned residents, it is itself a manifestation of the ideals of a past era. Glenwood belongs to a class known as the rural or garden cemetery, which became popular in Europe and America in the mid-19th century. With Romanticism at its height, art, poetry and even the landscape were affected by an idealization of nature, and the rigid shrubberies common to the French garden were soon replaced by large, sloping lawns, rivers and ponds.

These elements of design were soon adapted to cemeteries to make them suitable as public spaces before the rise of the Public Park. The first brochure created for Glenwood indicates the original intent of the park in saying, “Here the worn and weary citizens will find a momentary but soothing retreat from bustle and toil. Here may Sorrow and pensive Meditation ever find a home.  And hither, let even the idle and the thoughtless come, to learn the lesson of their own mortality from the eloquent but unobtrusive teachings of the tomb.” First and foremost, Glenwood was represented as a place of peace for the living to enjoy. Peter Lemelin, Glenwood’s loving caretaker, seconds this statement in saying that even today, “Glenwood is as much for the living as for the dead.” Peter believes that Glenwood is an important part of Flint’s unique history, and he took My City Magazine on a walking tour to prove it.

The grounds of Glenwood consist of 33 acres of rolling, wooded hills divided into a western and eastern park, connected by a wooded path. The cemetery’s western half is generally acknowledged to contain older headstones than the eastern portion, although the ‘grandfathers’ corner,’ as Peter calls the tiny section that holds the graves of the cemetery’s founders, is on the eastern half. Ancient trees shade the markers of Flint’s oldest, most prominent, and a few of its forgotten citizens. As Peter pointed out the notable headstones, names and symbols, he told stories of the cemetery’s residents, speaking of them like they were old friends. For a brief moment, it was as if the men, women and children came back to life in his telling.

The people resting in Glenwood are diverse, ranging from Michigan governors to veterans of every major American conflict – including the Revolutionary War – to industry barons and the 11 unmarked graves of orphans from the Michigan School for the Deaf, Dumb and Blind. The materials of which the gravestones are constructed are as unique as the people whose names are carved into them. Sandstone is a common material of old, but because it weathers easily, many of these gravestones in Glenwood are unreadable, making the inhabitants a mystery. One of the most interesting and rare materials used to make headstones was zinc. Practically all zinc monuments in America were produced between 1874 and 1914 by The Monumental Bronze Company of Bridgeport, CT, which established its first subsidiary in Detroit in 1881. Marketed as “white bronze,” these monuments were insusceptible to erosion and were much less expensive than tradition materials such as granite, marble and limestone, due in part to the fact that they were hollow.

Gravestone symbolism at Glenwood is an area rich in both history and mystery. As he expounded on the meaning behind the symbols scattered throughout the cemetery, Peter was careful to give a caveat as to the accuracy of such definitions. “It’s a very subjective thing, gravestone symbolism; it’s really more like lore. Besides, you never can say definitively that a headstone with certain symbols was chosen because it represented the deceased. Maybe it was just on sale,” he said with a twinkle in his eye. Just as language and customs have changed, so has the usage and meaning of different icons. Much of the décor on Glenwood’s older gravestones speaks to themes such as mourning, indicated by drapery; victory over death, shown in crowns and laurel wreaths; and eternity, symbolized by circles and torches. One of the most common themes in cemetery symbolism is hope, and at Glenwood, she stands personified atop the Morrison monument. Other symbols tell about the character of the deceased. Oak leaves indicate strength and longevity, while lilies of the valley symbolize innocence or purity. Two of the saddest symbols are shorn tree limbs and broken columns, the former denoting an absence of lineage, usually due to the loss of a child, while the latter indicates a life cut short.

Not many places in a city collect history the way Glenwood has for Flint. A walk around the grounds will transport visitors into all the adventure, triumph, and occasionally, all the heartache of past eras. No chronicle reads quite as eloquently as the graves at Glenwood. “Look out over this cemetery at the names on the headstones,” says Peter. “They are the names of the streets we drive on, the parks we play in, and the schools we send our kids to.” Glenwood is the home of the city’s past, giving to the living a tranquil sanctuary as it gives to the dead a resting place. “Dear Glenwood,” said a visitor in the year 1866, “to receive us when our work is done and our labor finished.”

Let’s bring back an old tradition:

A Picnic in a country graveyard!

If this is a little too fancy for you, replace all that French cuisine with sandwiches!

Are you interested in purchasing photos from this story? Go HERE and select the “Glenwood Cemetery” category.