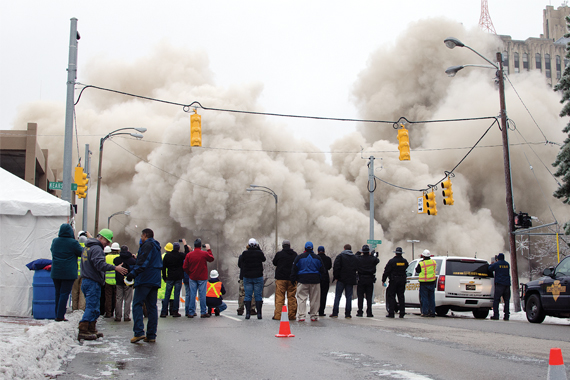 Let’s just be real here. What once stood as one of Flint’s more impressive buildings later became an eyesore. The Genesee Towers finally fell on December 22. She had all the trappings of an advanced mid-20th century structure in her day. There was a parking lot that sat on top of one tower while resting beneath the other and prominent businesses filled the office space with a restaurant on the top floor. But in time, tenant vacancies and ownership changes led to a city acquisition and ultimately, residential responsibility.

Enter Uptown Reinvestment, who purchased the Genesee Towers in 2012 and took on the task of relieving us of the once iconic building by facilitating its demolition last month. Demolition Dynamics of Jacksonville, FL supplied the manpower and skill necessary to bring the Towers down. Veteran implosion contractor Steve Pettigrew oversaw the project. Pettigrew has overseen hundreds of implosions throughout his career and in his words, has “shot closer” than the short distance between the Genesee Towers and the Mott Foundation Building. He spoke of the demolition process with a certain austerity and ease at the December 20 press briefing on the demolition.

What remains now is an empty lot that will be converted into an “urban plaza,” tentatively named “Exploration Park,” which will be a kid-friendly outdoor scientific experience that should be completed by summer 2014. Ridgeway White of the Charles Stewart Mott Foundation will be a part of the new development. He shared with My City Magazine that the future park “takes the features of an indoor museum and puts them outside” and that it is “a low-cost way” to provide something for the public in place of the towers.

So, here we are at the New Year with the beginning of a new development. After months of waiting to see the Towers go with several demolition date changes, I’d say this is great timing. Here’s to you, Genesee Towers. Thank you for 45 great years.

Are you interested in purchasing photos from this story? Go HERE and select the “Genesee Towers” category.

Share. Twitter Facebook Google+ Pinterest LinkedIn Tumblr Email
Previous ArticleA Vision for Flint Mayor Walling wends his way with a Master Plan
Next Article Looking Back, Moving Forward You can’t know where you’re going until you know where you’ve been